Share
Pierosara stands in the green heart of the Gola della Rossa park and is located a few kilometers from the Frasassi Caves. The origins of the village are linked to the legend of Piero and Sara. In ancient times the town was an important medieval castle that had vast sovereignty over the surrounding area. 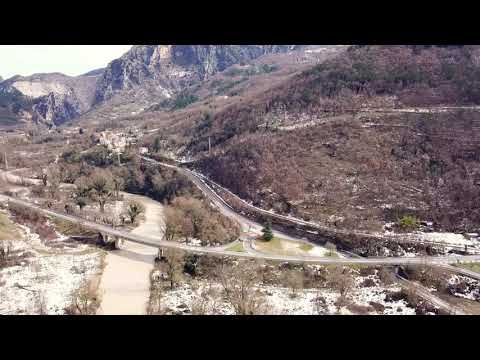 Pierosara was an important medieval castle that had vast sovereignty over the surrounding territory. Of the ancient Castrum Petrosum there are today the two walls with the relative doors and the defense tower. It stands on a hill at 394 m.s.l.m., which dominates to the south-west the Gola di Frasassi where the river Sentino flows and to the north-east the Gola della Rossa crossed by the river Esino. The village is located in the heart of the Regional Natural Park of the Gola della Rossa and Frasassi.

It is said that the Count of Rovellone, feudatory of the Castle of Rotorscio, knew a girl named Sara living in Castel Petroso. Fascinated by the beauty of the young, he fell in love with her, but decided to kidnap her because she was betrothed to another castellan named Piero. One night, the feudal lord entered the castle and succeeded in his intent. However the inhabitants of the place immediately noticed the crime and to avoid the worst closed the doors and began a violent battle against the knights followers of the Count of Rovellone. During the brawl, the count, who was conspicuous to surrender, killed the beautiful Sara who was holding in his arms. Piero came down upon the killer, who, brandishing an ax, also struck the unfortunate young man who fell dying near his young beloved and with a last hug he died beside her. To remember this sad event, Castel Petroso, from that day, assumed the name of Pierosara.

The origins of Castrum Petrosum, this ancient name vulgarized with the passing of the centuries in Plarosara, Plerosaria, Perosara and then in the current Pierosara, are difficult to reconstruct. Given the strategic position on a hill near two gorges, that of Frasassi and Rossa, from which it was easy to control the valleys of Sentino and Esino, it is possible that the inhabitants of Tuficum, (one of the four Roman city of the upper Esino valley, located near the Albacina fraction of Fabriano), began to build the first defensive structures and sighting.

After the Roman colonization and the dark period of the barbarian invasions, the Lombards with the establishment of the Duchy of Spoleto placed the Castle of Pierosara as a focal point of the border. Longobard feudal lords, converted to Christianity, favor, since before the year 1000, the Benedictine settlement and the development of the abbeys. Called Lombard milites, they adhere to the Lombard laws until the twelfth century, when they supported the Church. Thanks to this policy, they managed to preserve autonomy and privileges until the period of the communal age.

The Abbey of San Vittore, no longer able to oppose the now flourishing Municipality of Fabriano, for a peaceful coexistence, in 1212 subjected the castle to it. The subsequent decadence of the municipal power, as well as the Abbey of San Vittore, caused a strong weakening of the social and economic structure. In the seventeenth century it was one of the poorest castles of Fabriano. However Pierosara retained its own autonomy until the advent of the Kingdom of Italy, this also confirmed by the use of its own seal: a Latin cross that rises on a horizontal line with S.P.S. (Sebastianus Patronus Sanctus). The statute of the castle had to be ratified every three years by the Fabriano judiciary and the government was entrusted to the "Capoquattro", four men elected every two months for extraction from the compass.

The nearby Caves of Frasassi, with the Valadier chapel, and the Church of San Vittore alle Chiuse in San Vittore Terme are definitely worth a visit.

the Municipality is part of:
Paesi bandiera arancione

Via S. Vittore, 5 - 60040, Genga (Ancona)
0.83 Kilometers from Pierosara
Frasassi Caves
The Frasassi Caves of Genga are located within the Regional Natural Park of the Gola della Rossa ...

Piazza Roma, 26, Camerano (Ancona)
48.76 Kilometers from Pierosara
Frasassi Caves
The Frasassi Caves of Genga are located within the Regional Natural Park of the Gola della Rossa ...

Albergo Ristorante Il Parco
Via Guglielmo Marconi, 7, 60040 Genga AN, Genga (Ancona)
0.77 Kilometers from Pierosara
B&B Casa Sponge
B&B Casa sponge is a small corner of tranquility and art immersed in the hills around the Pergola...