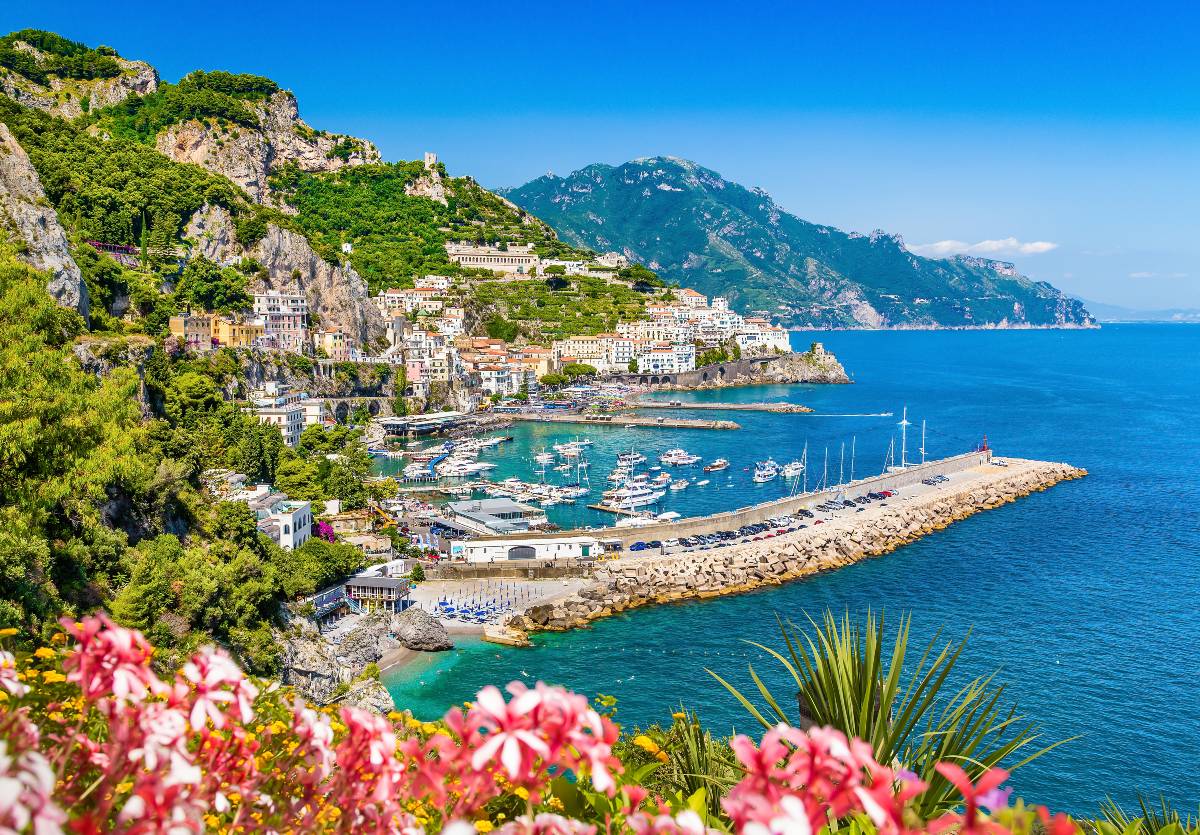 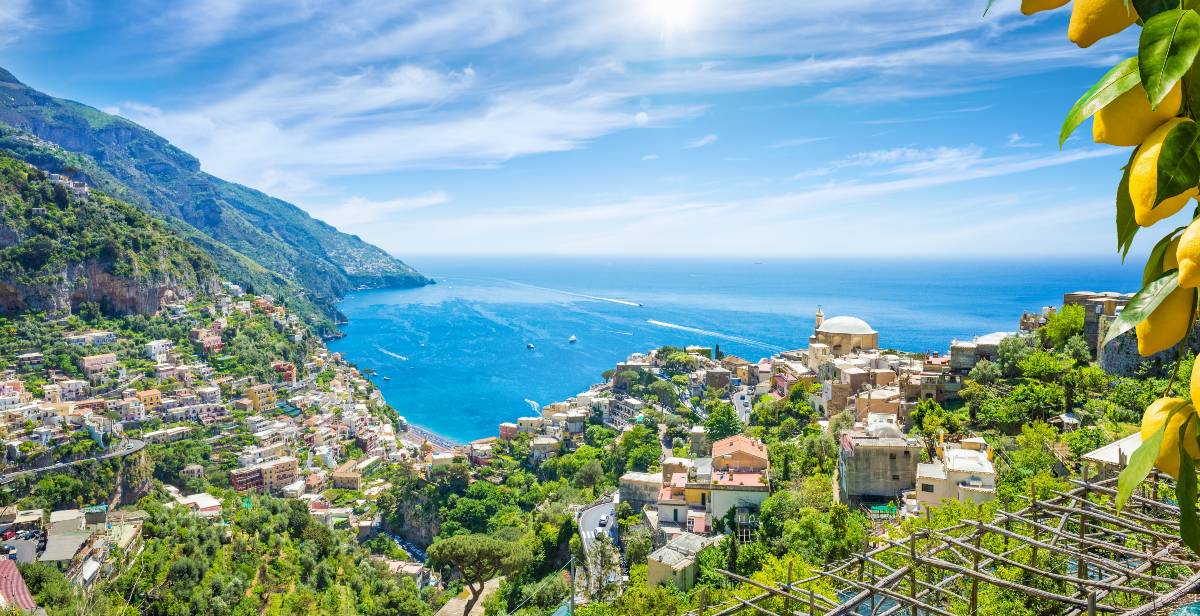 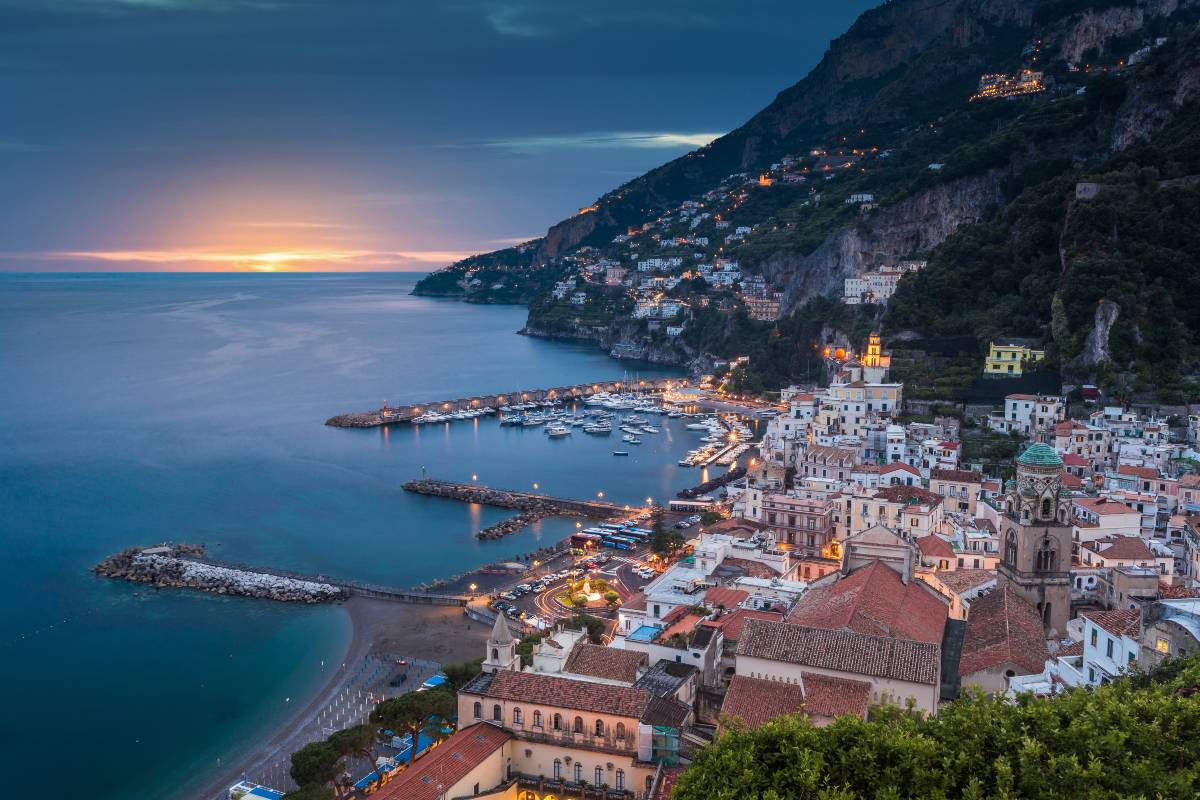 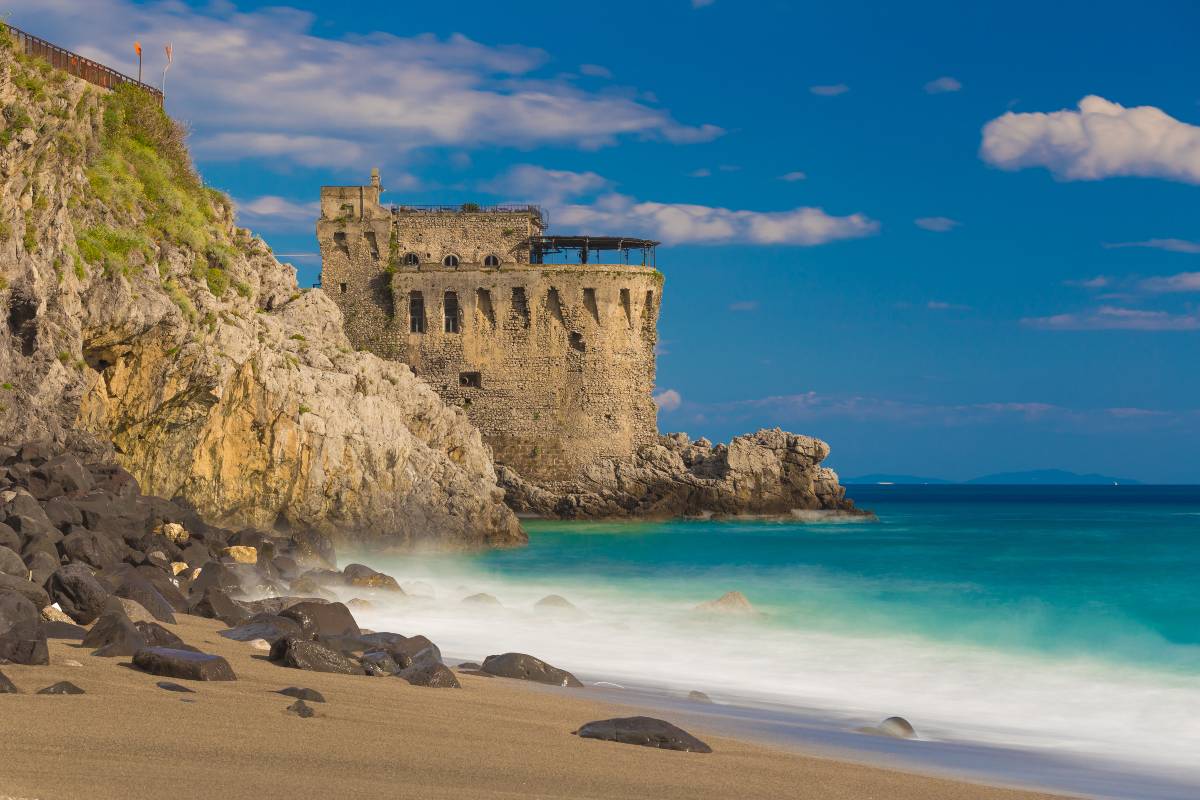 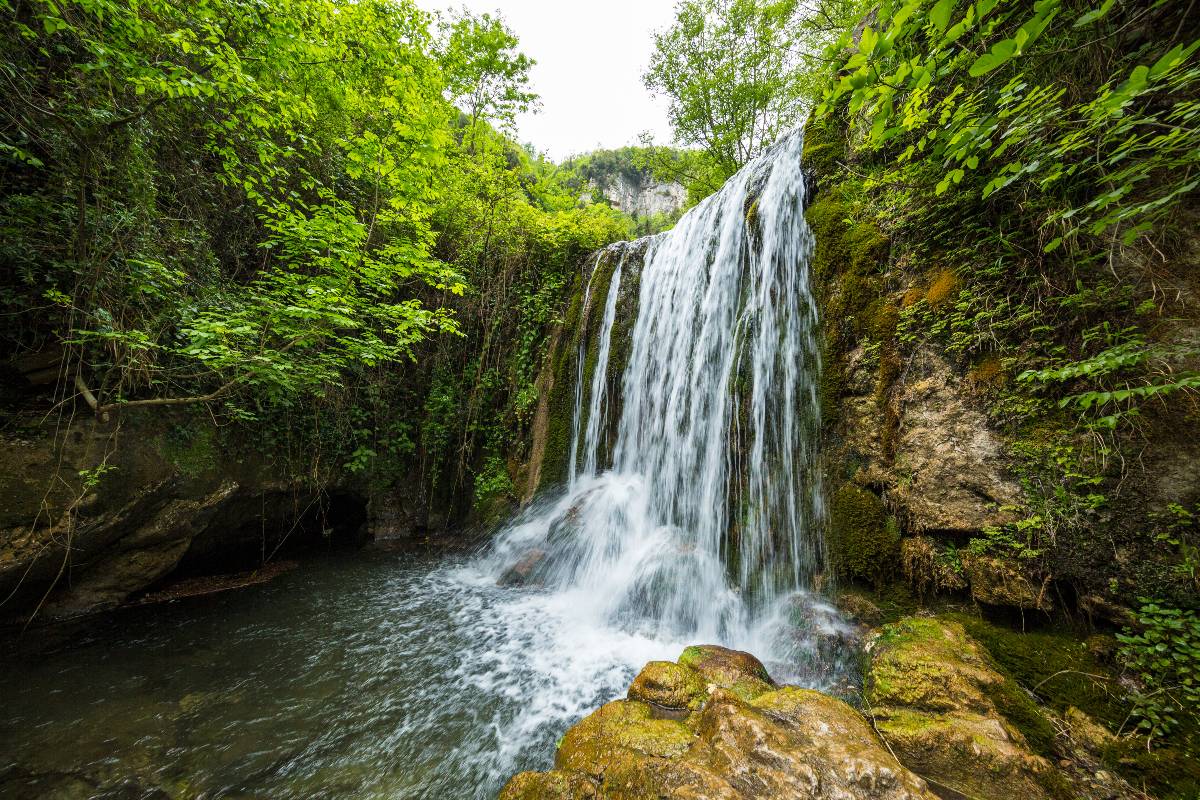 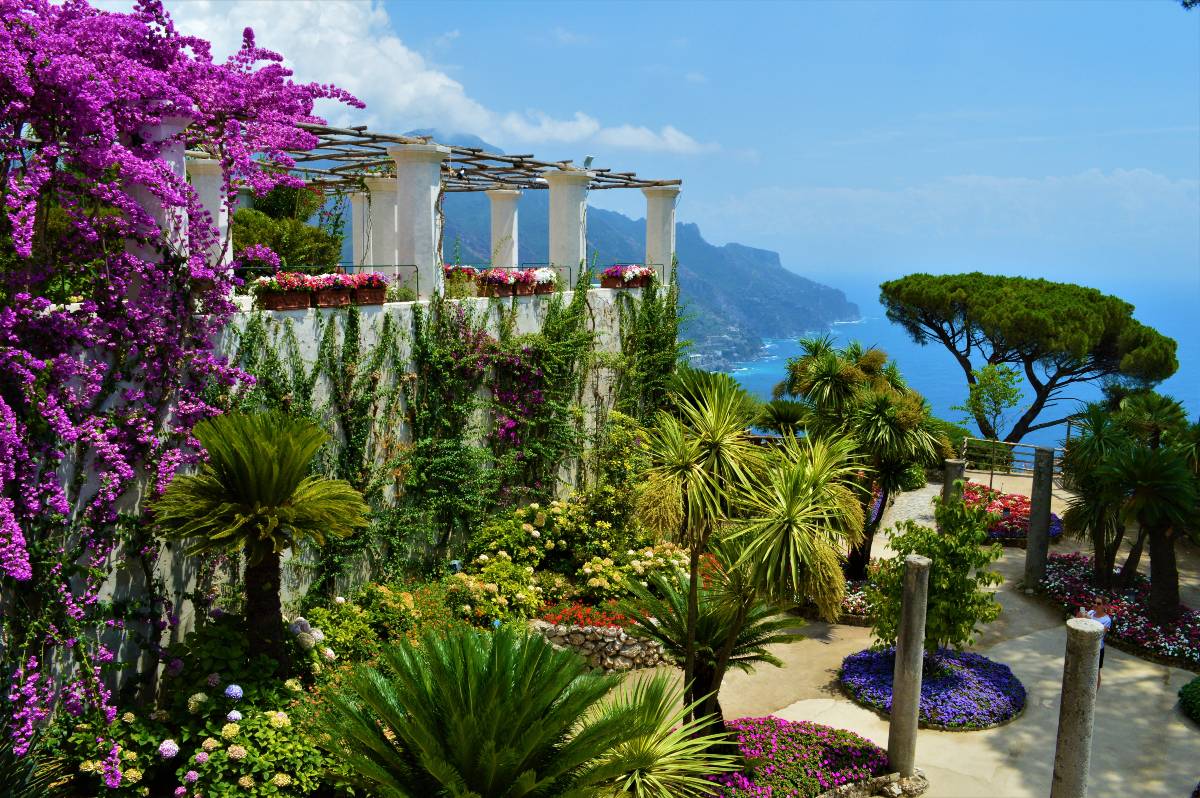 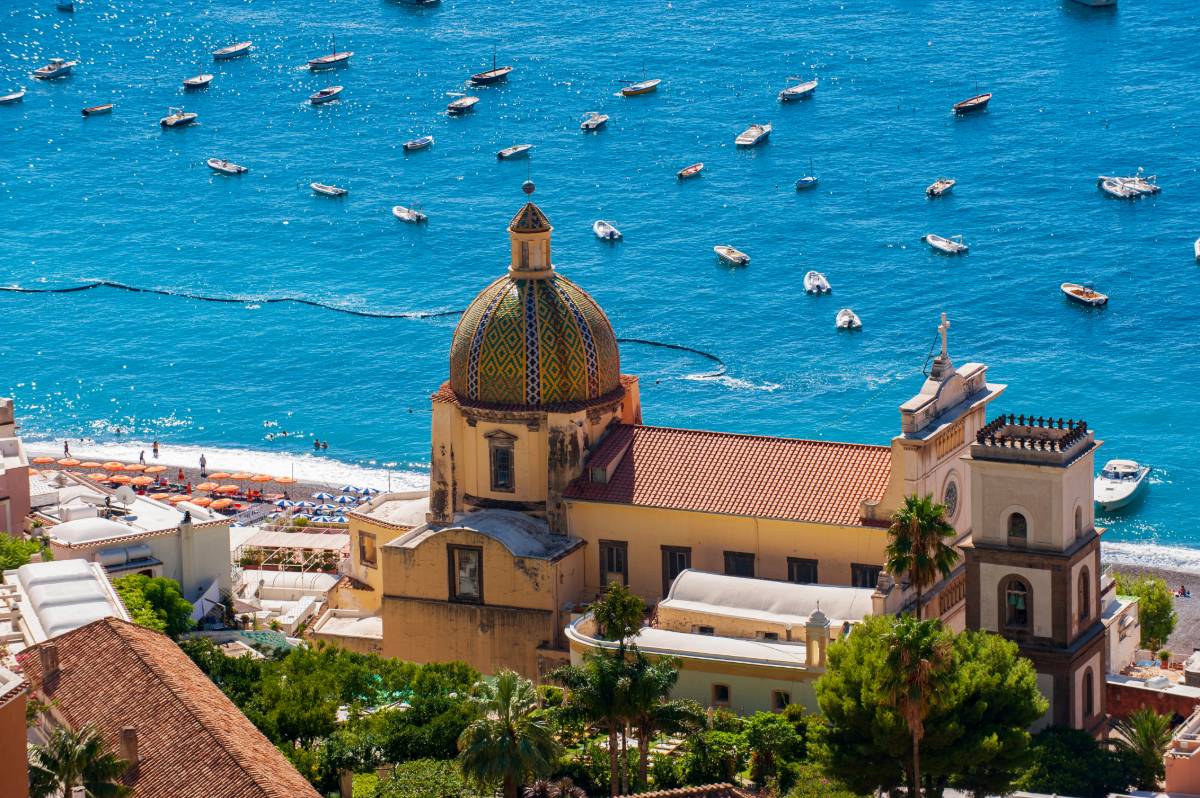 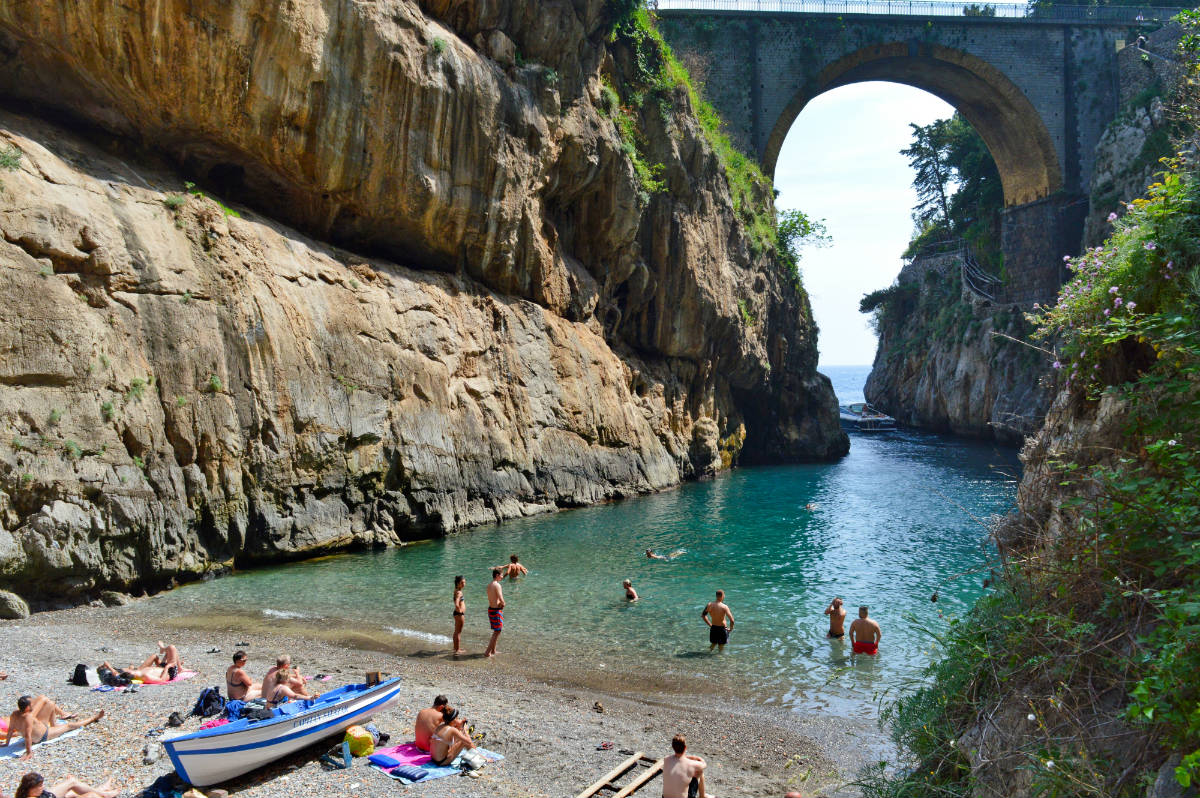 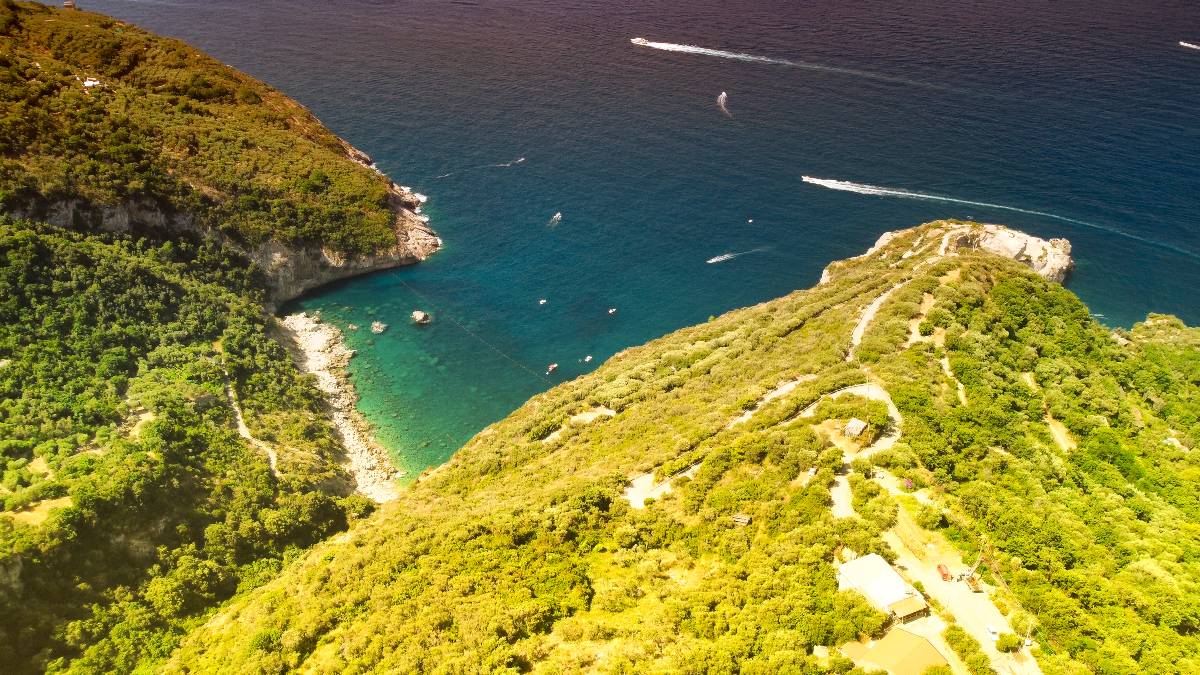 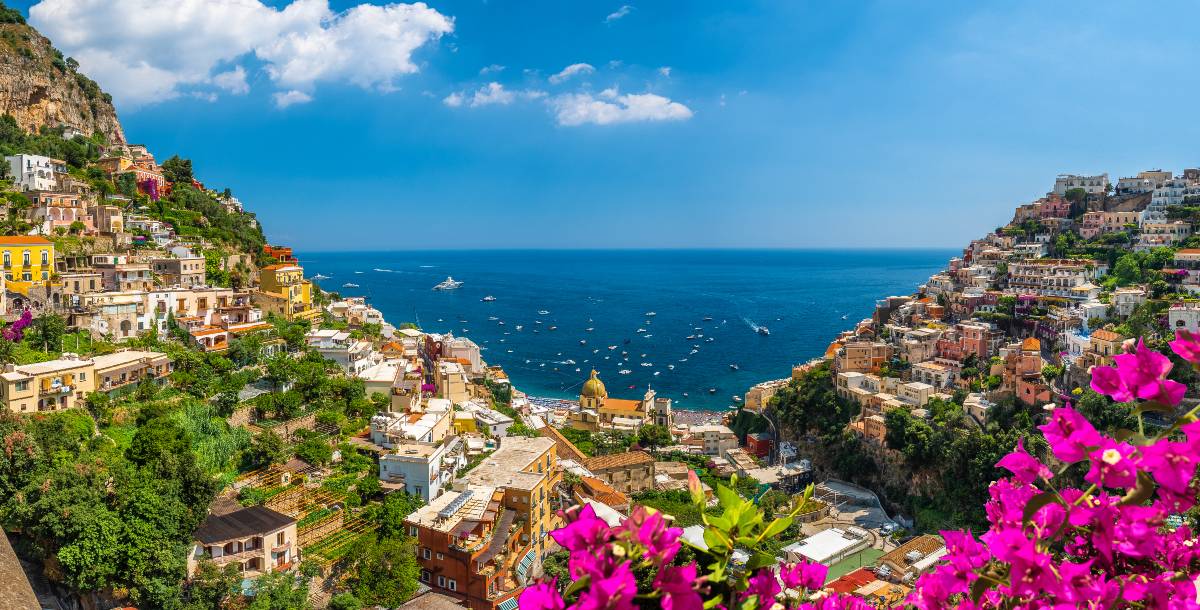 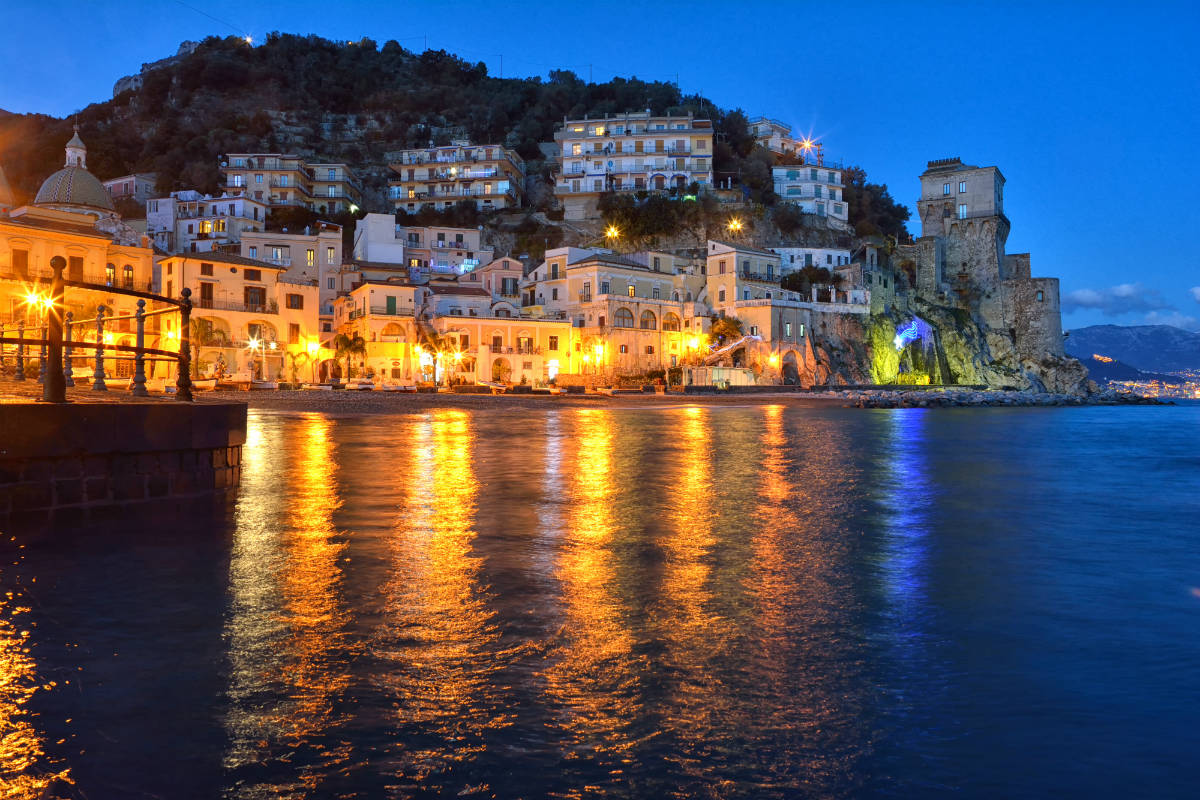 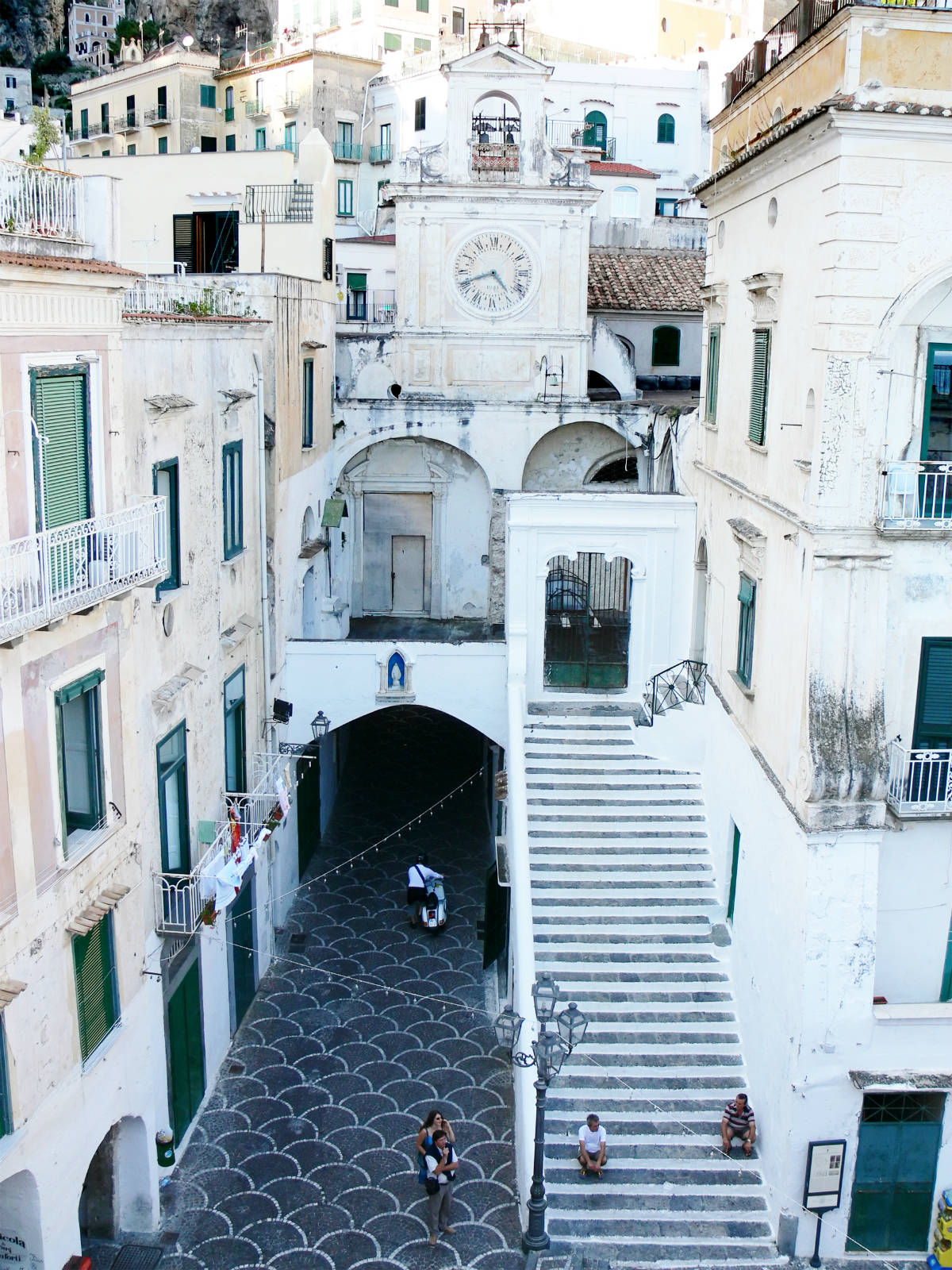 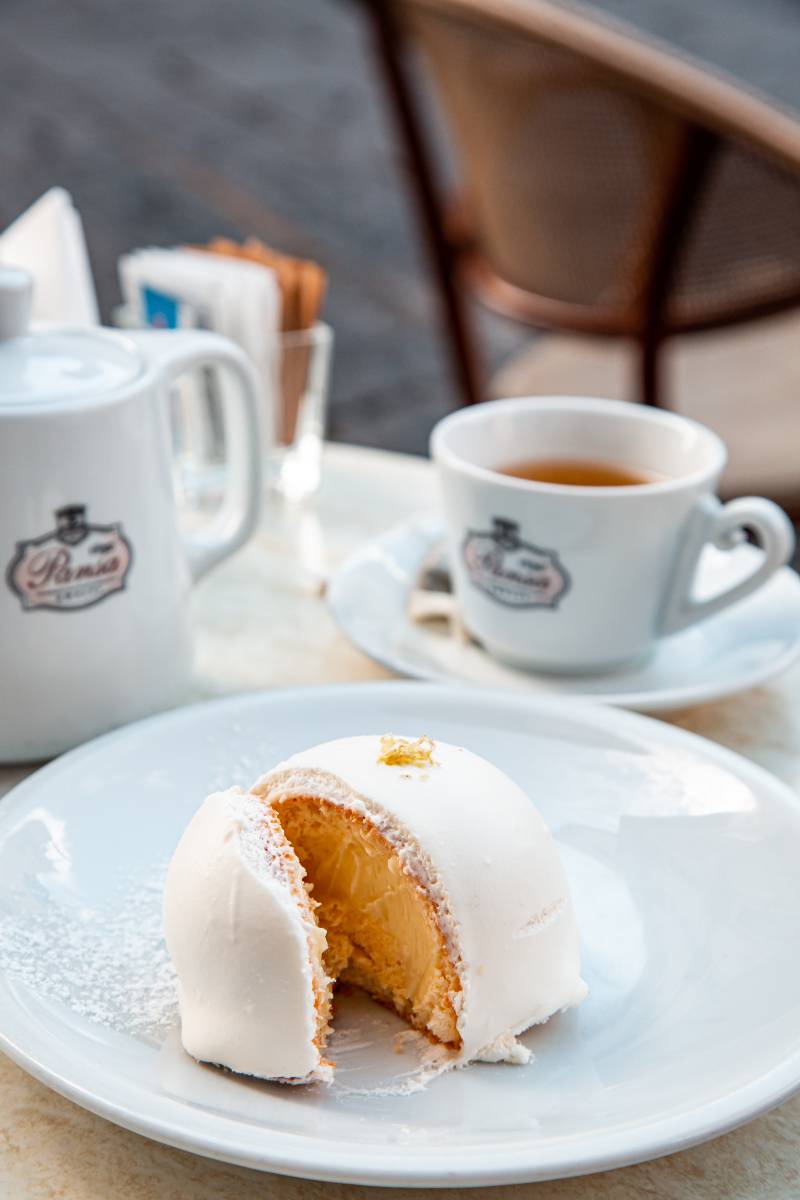 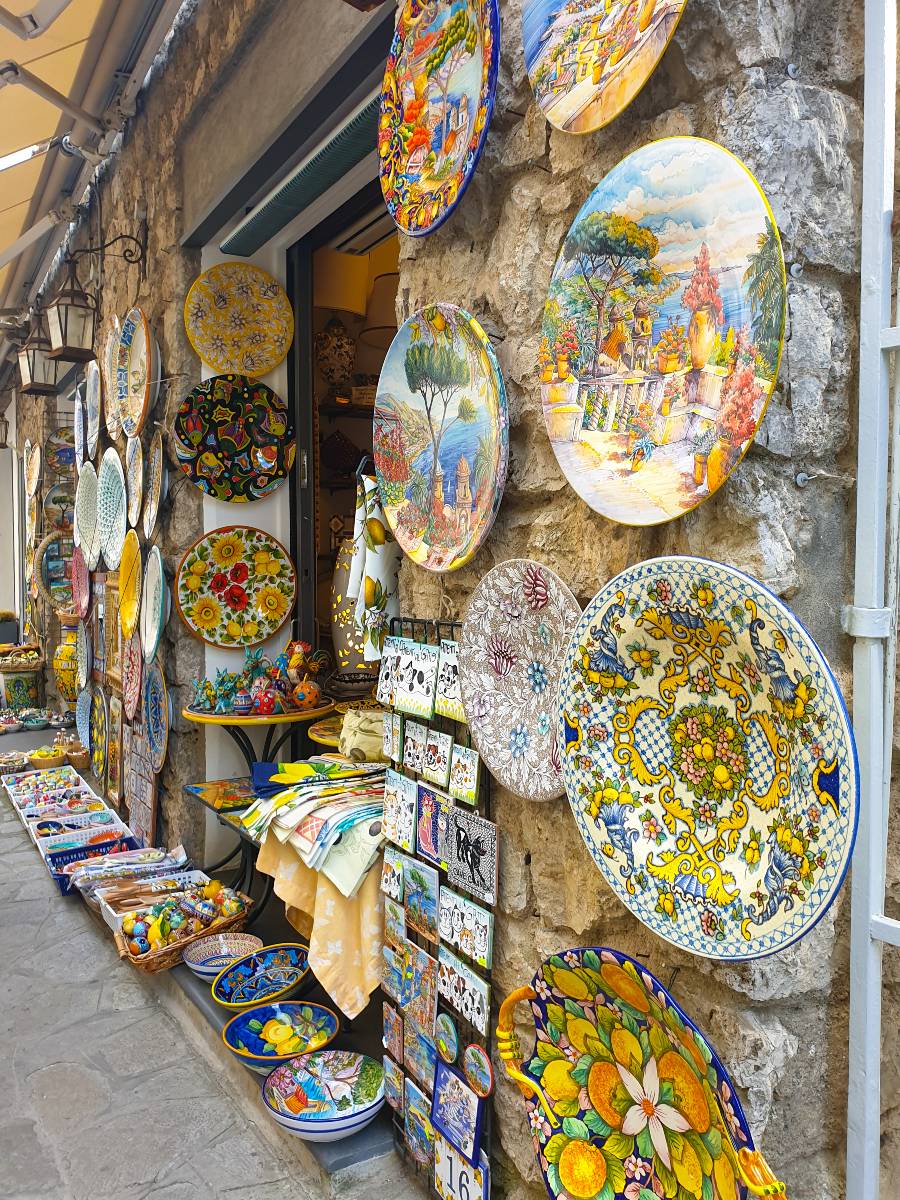 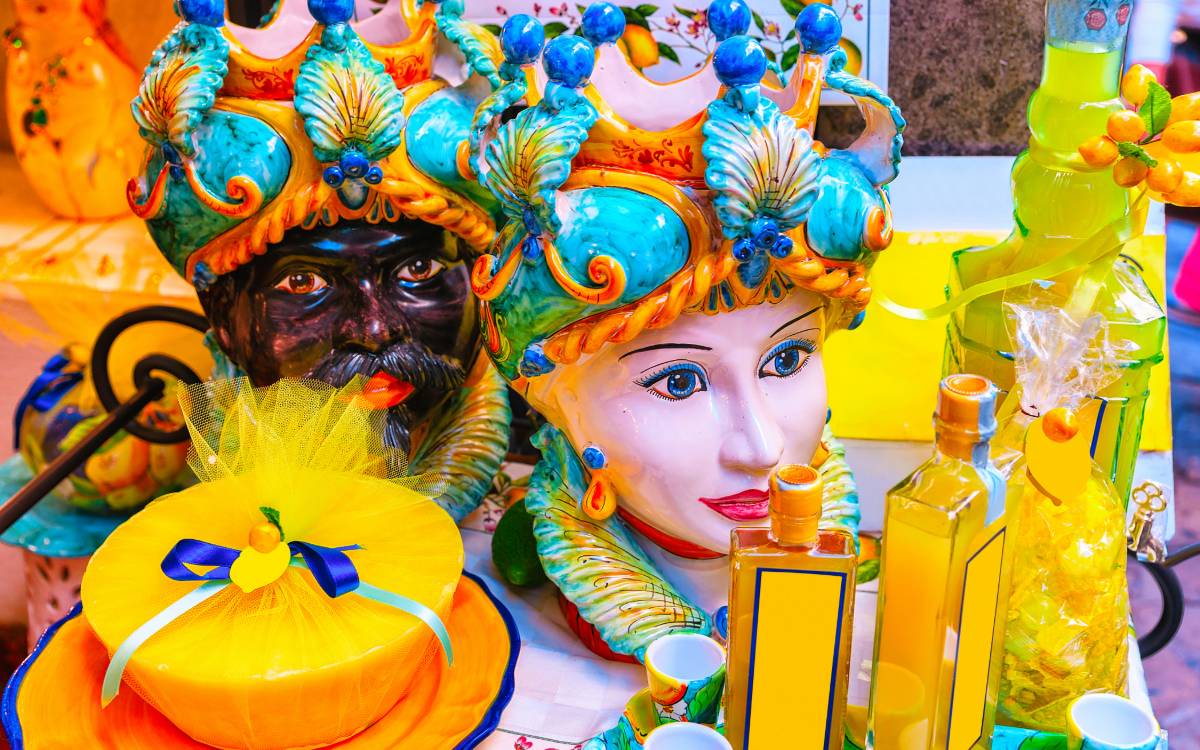 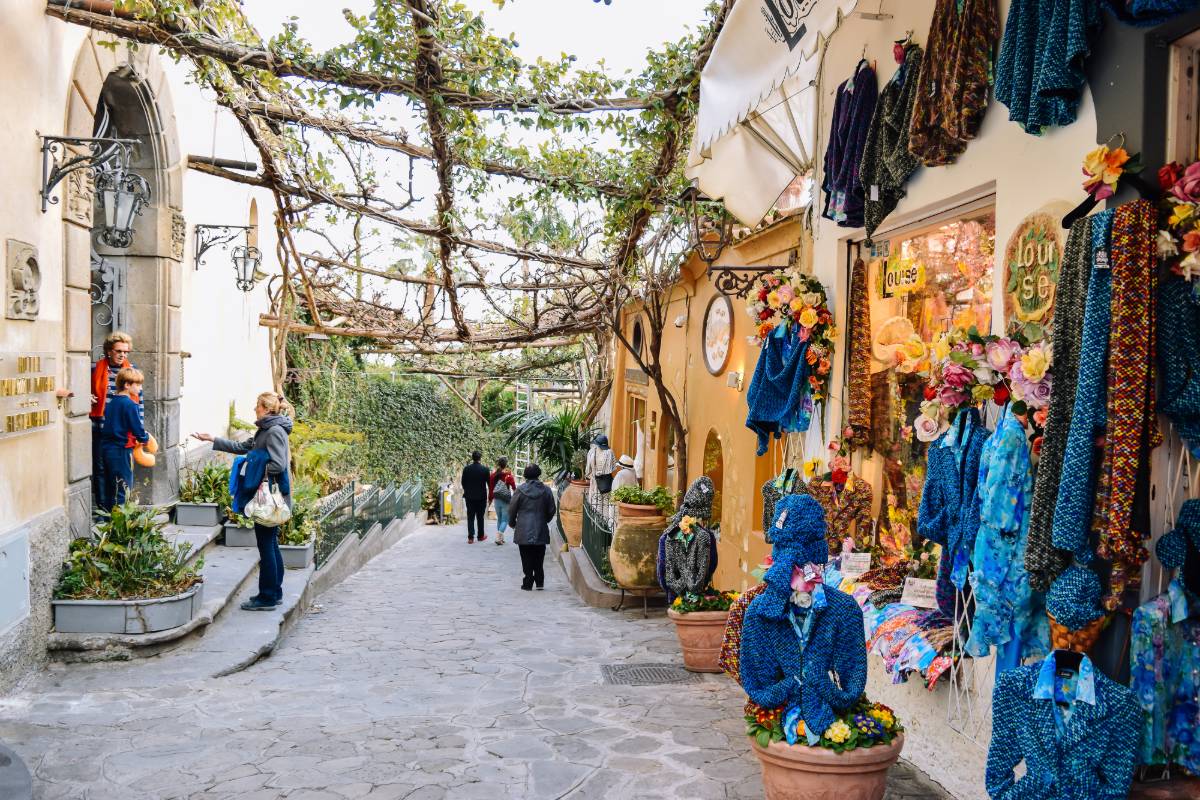 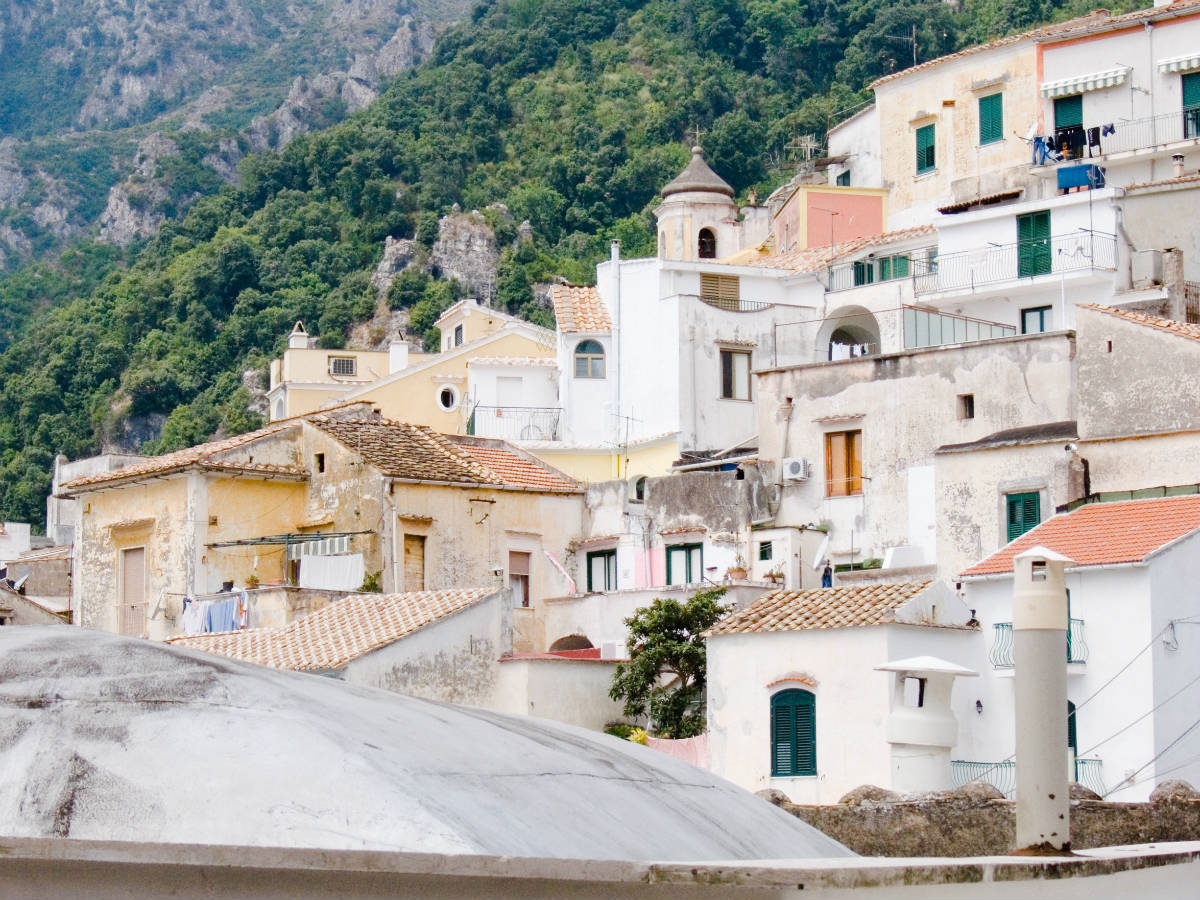 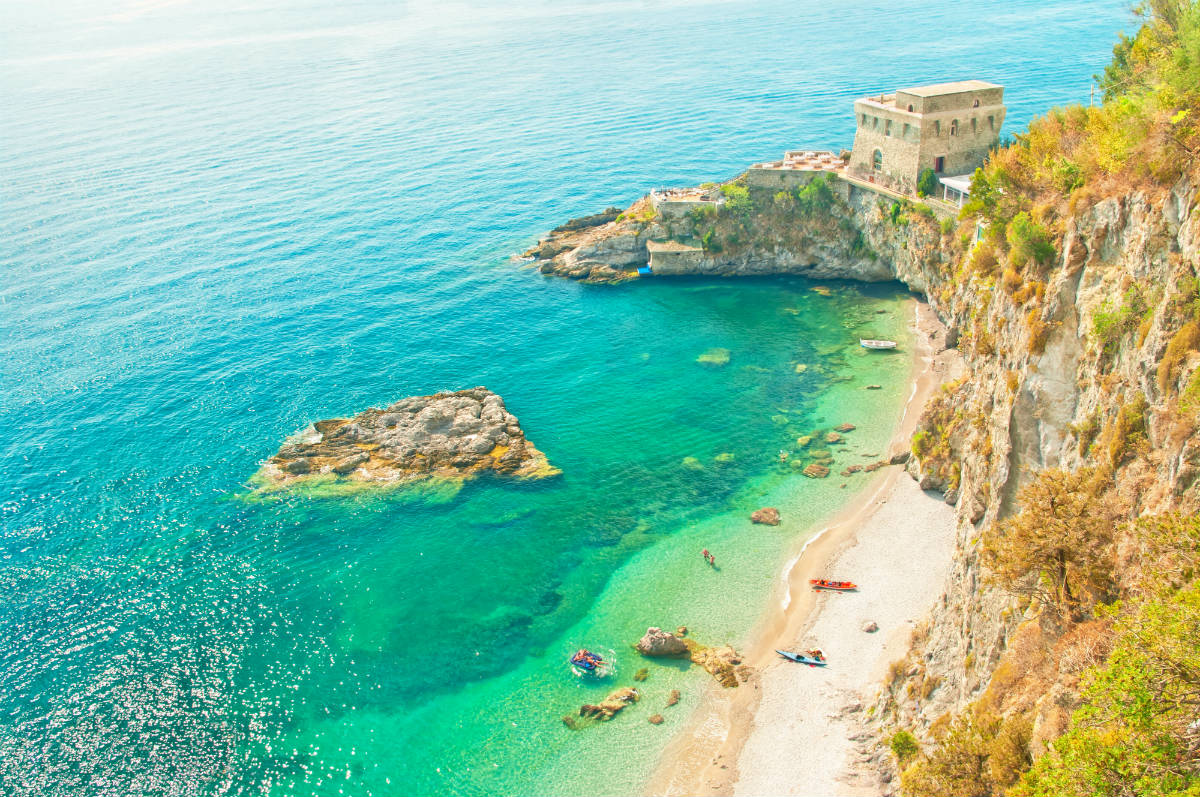 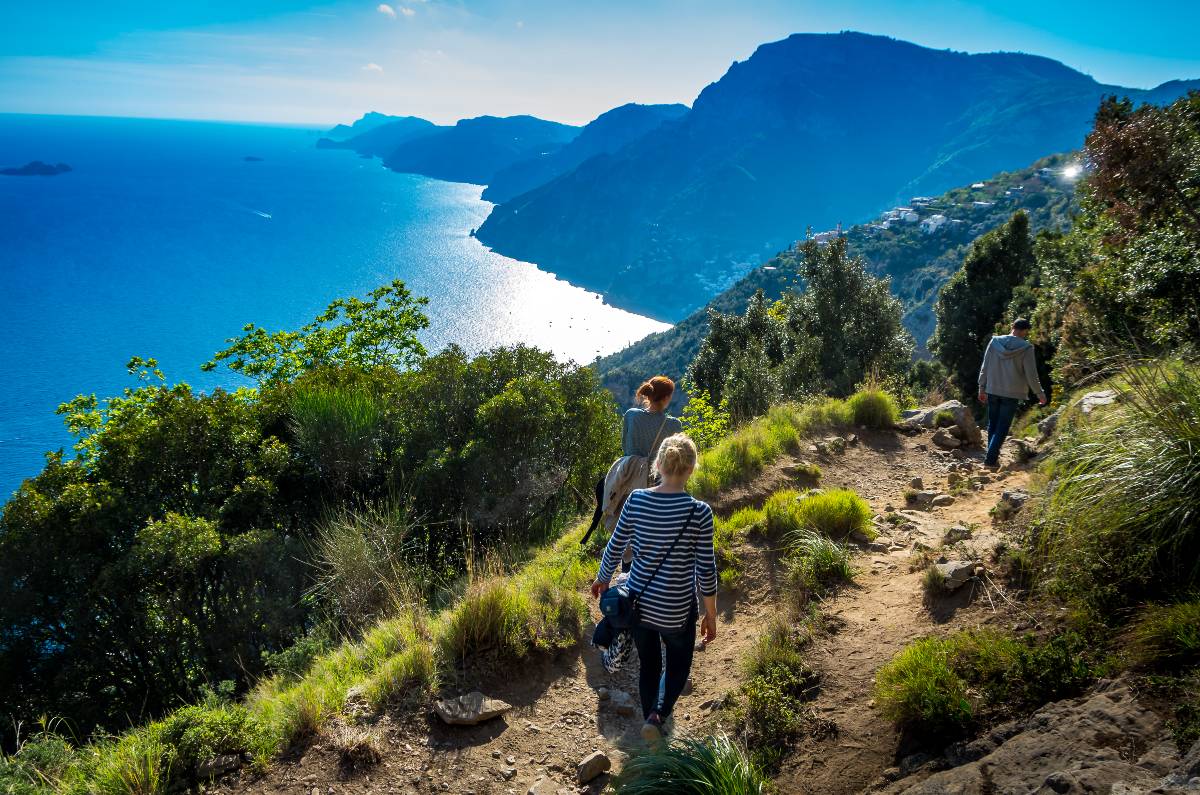 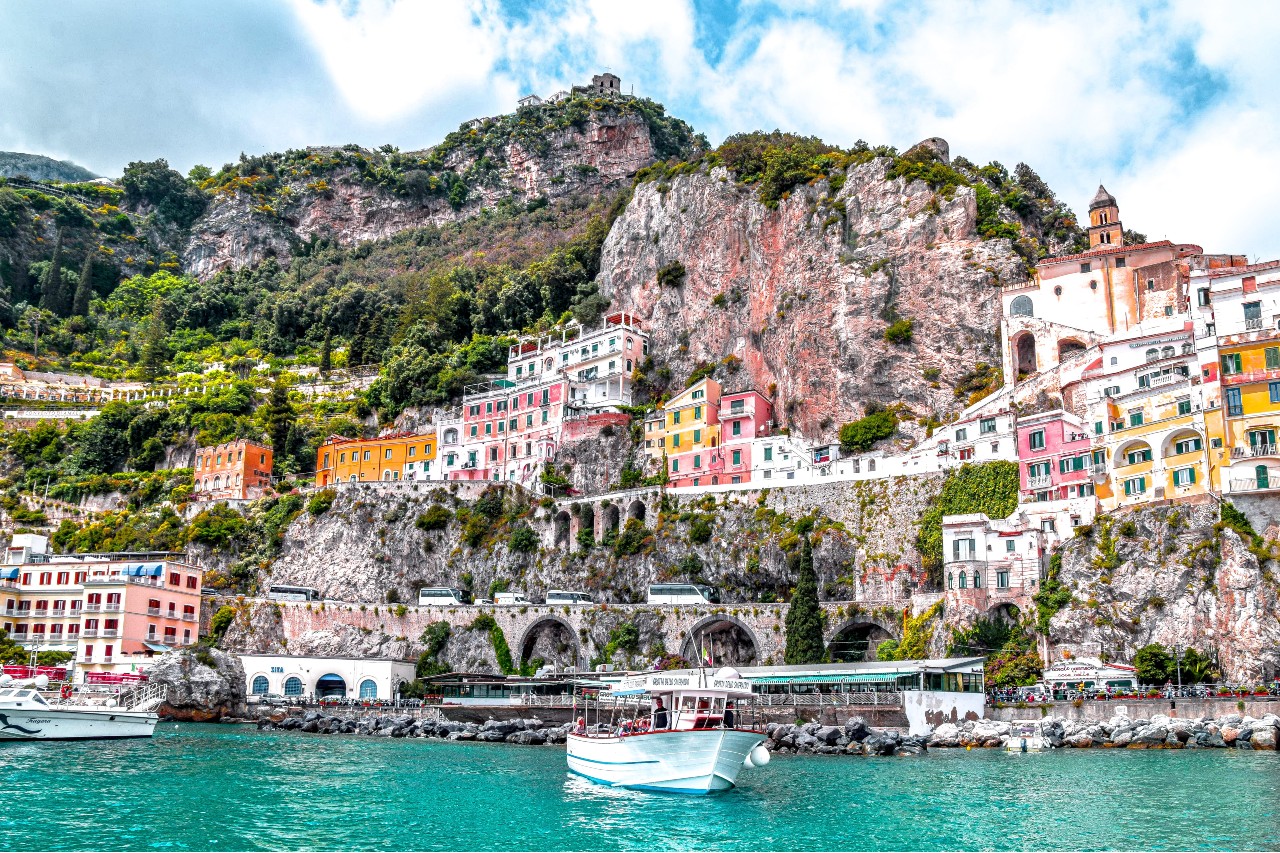 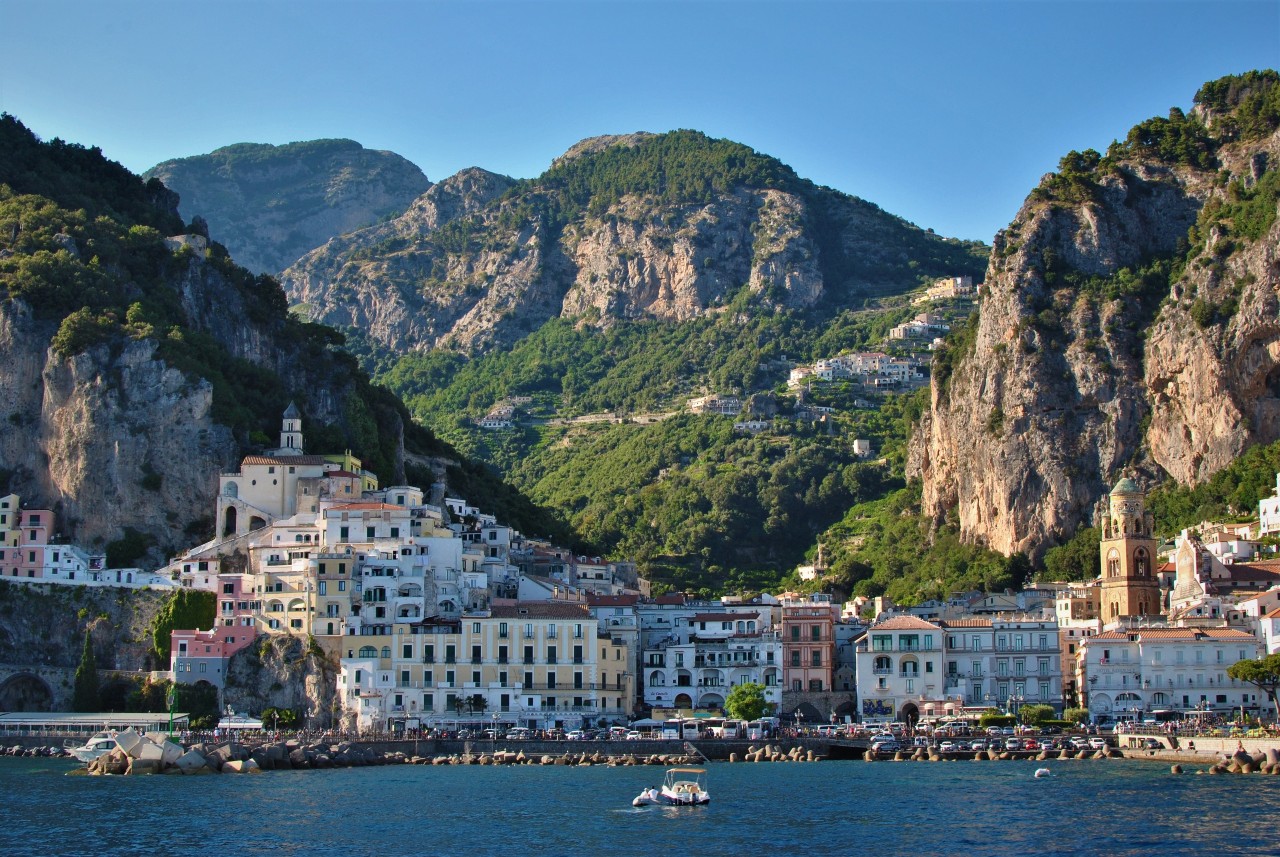 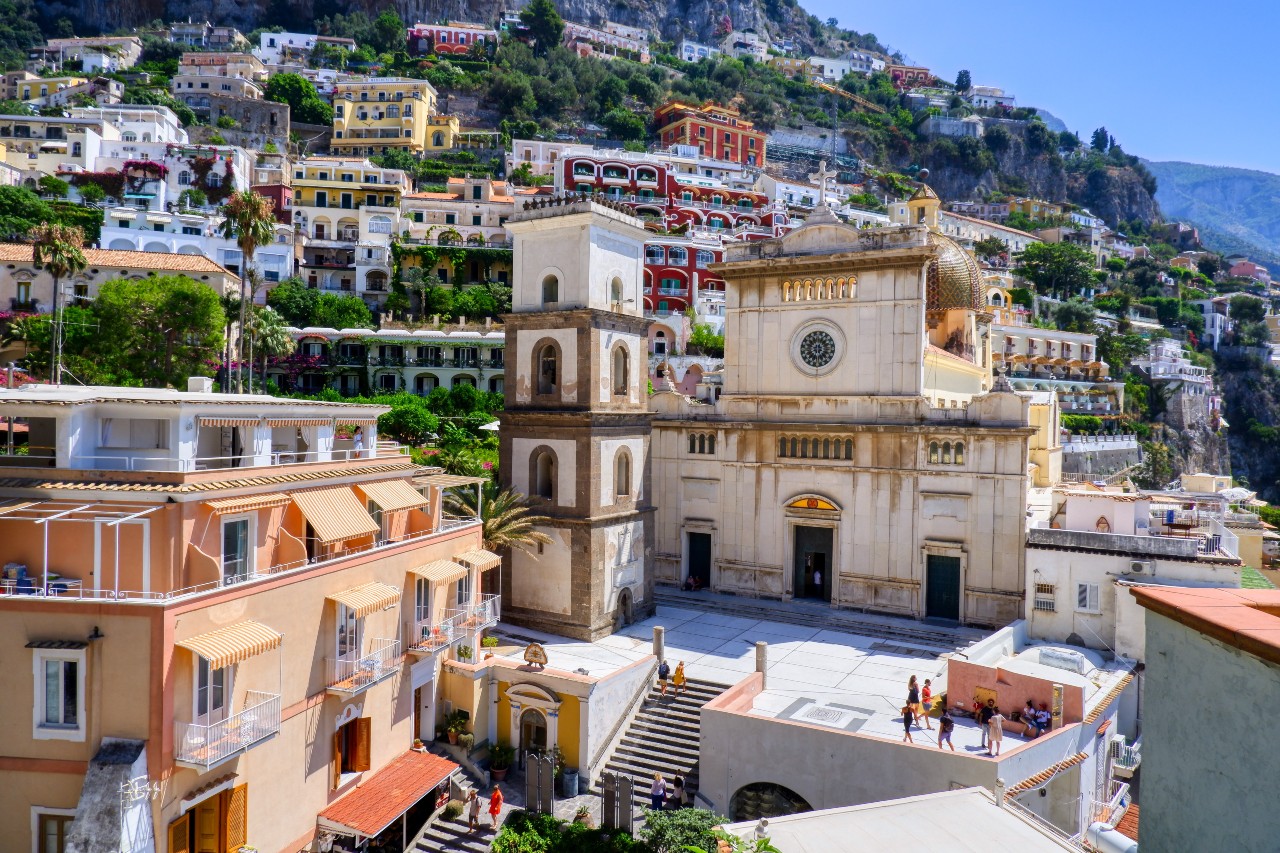 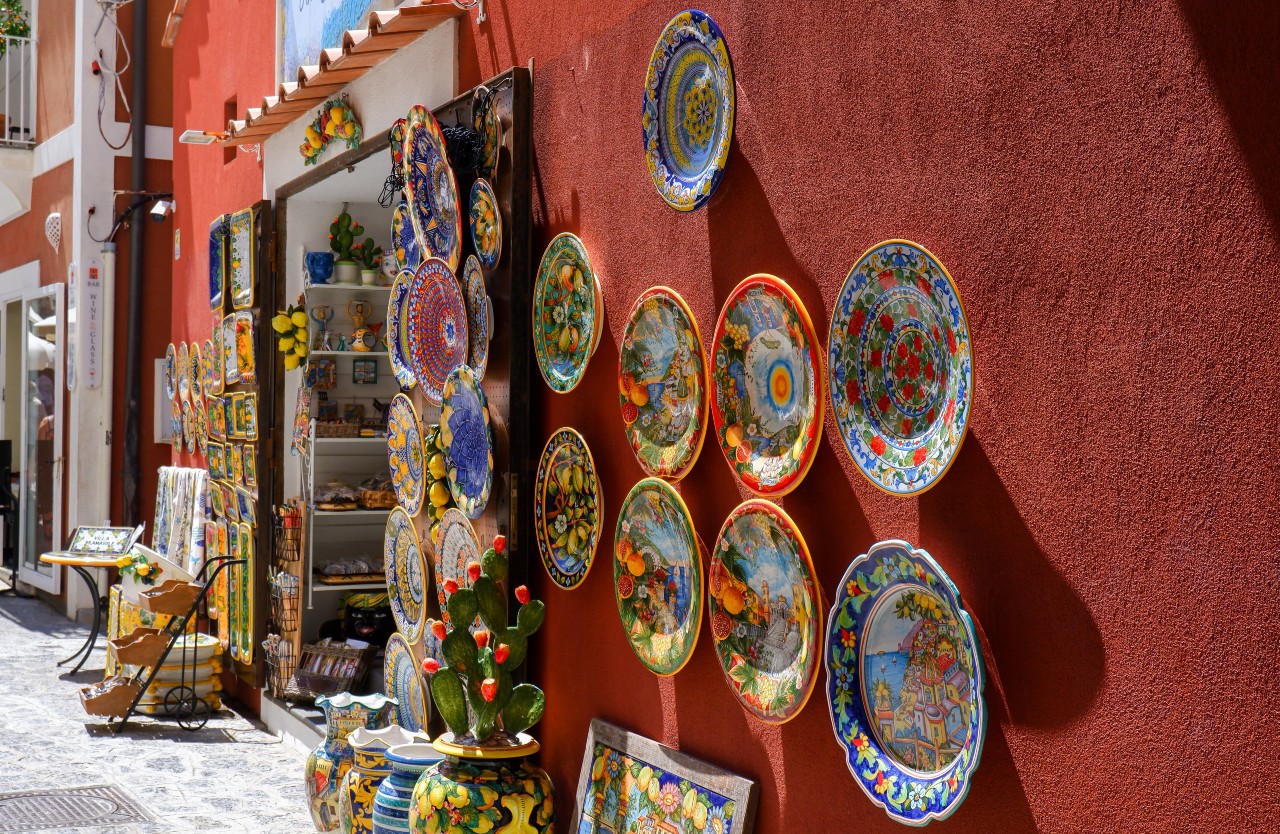 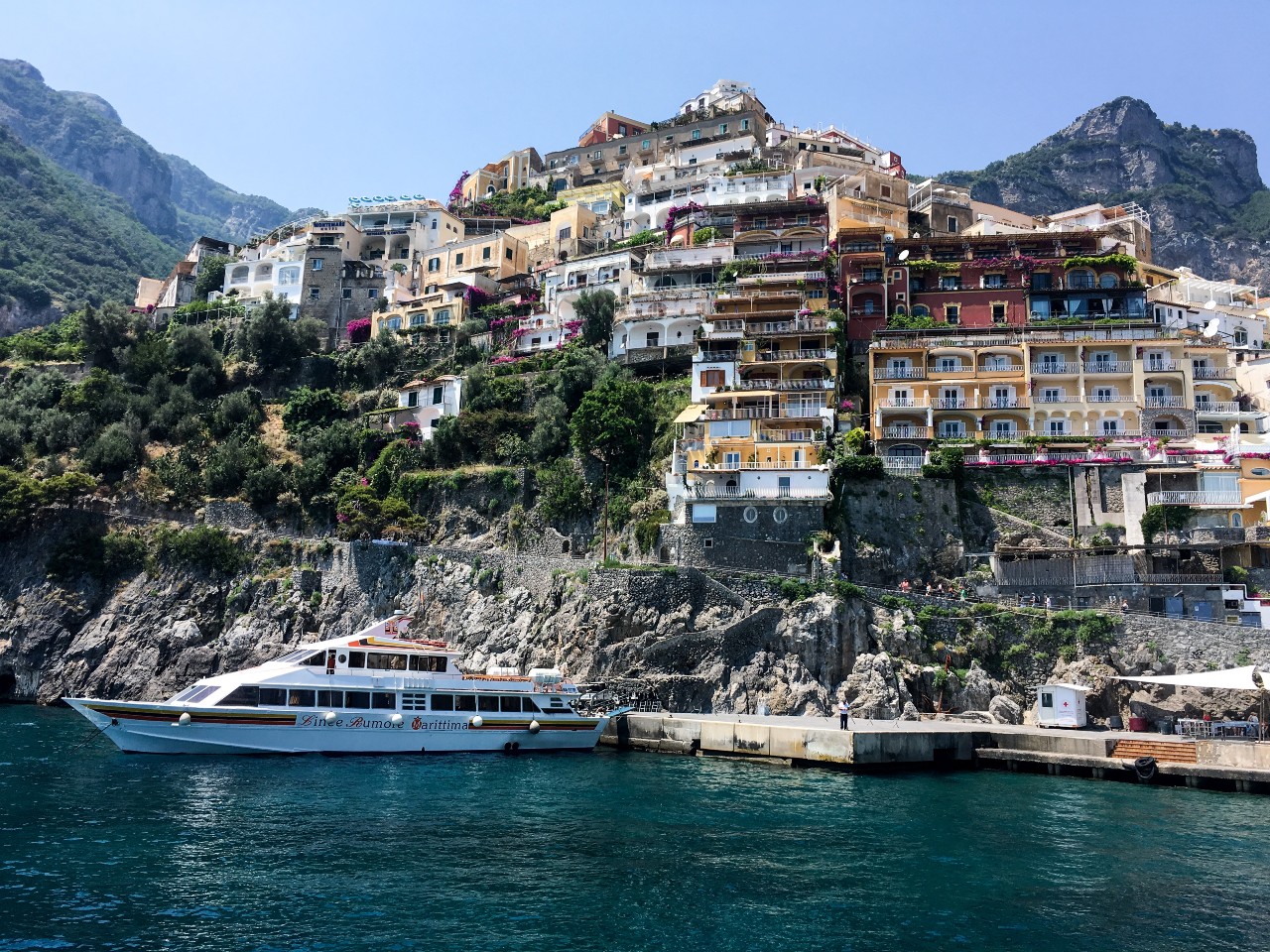 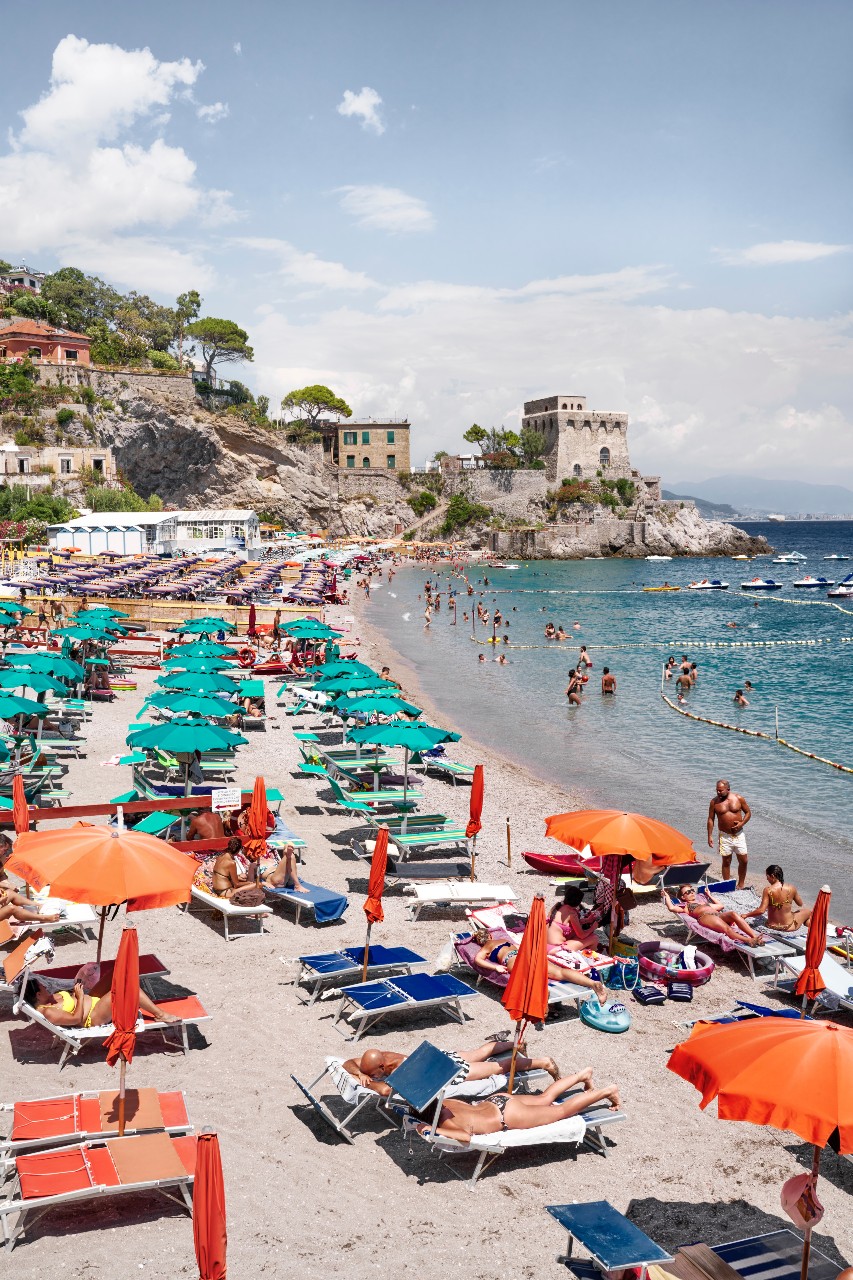 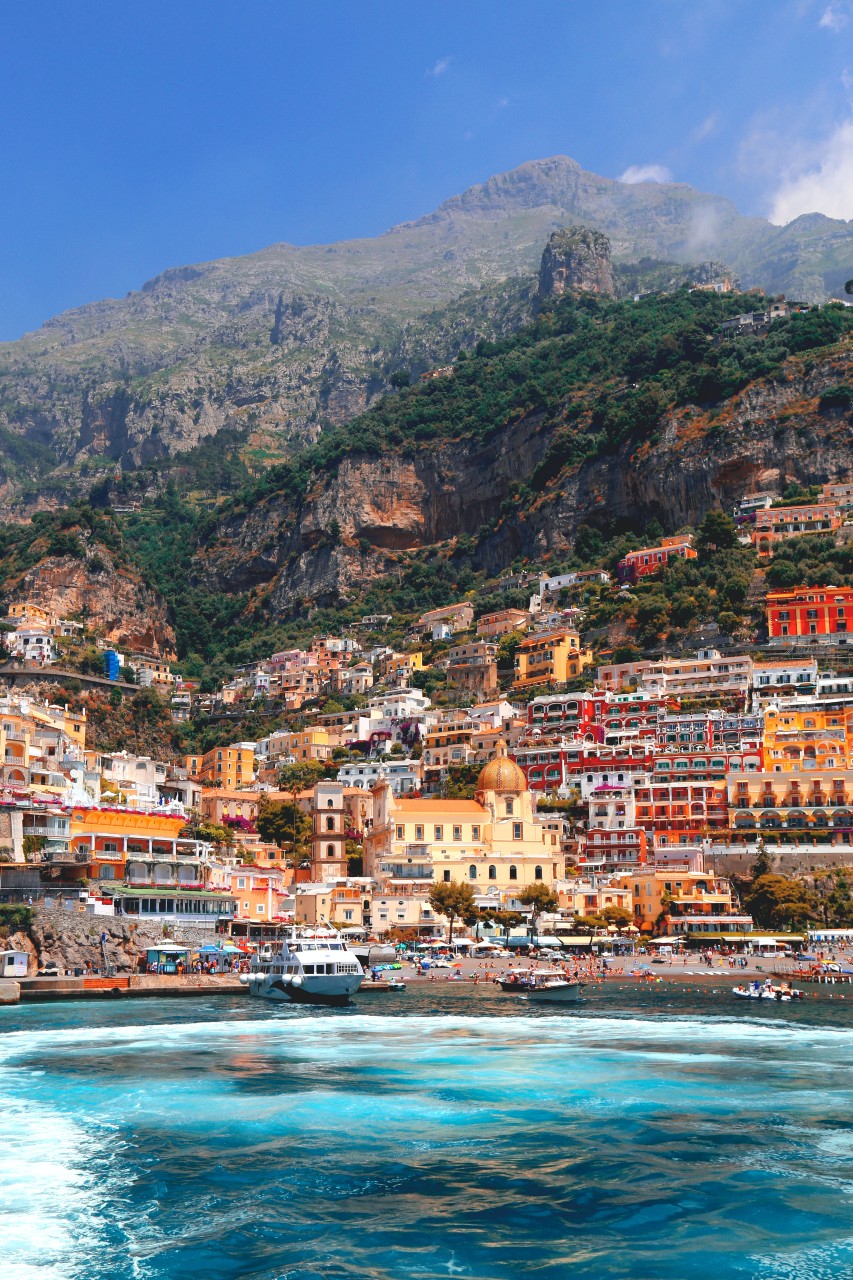 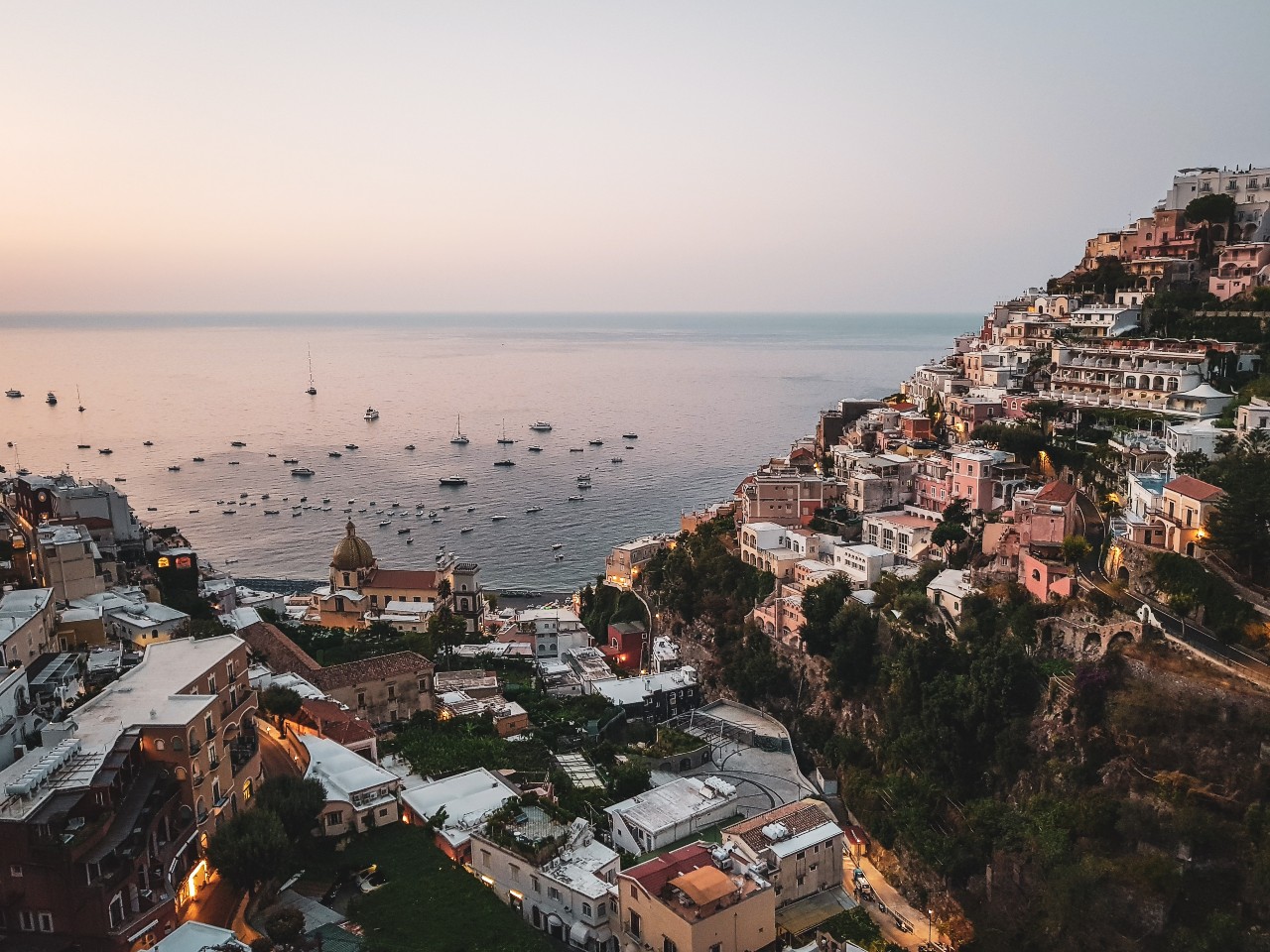 Italy is one of the richest countries in terms of UNESCO sites, some created by the hand of man and others by Mother Nature: well, the perfect mix between these two categories is the Amalfi Coast, a wonder that has fascinated tourists from all over the world for centuries. It is a portion of coastline, between Vietri sul Mare and Positano, overlooking the Gulf of Salerno.
The Amalfi Coast looks like a picture to those who visit it for the first time, with cliffs overlooking the sea, dotted with Mediterranean scrub and picturesque villages, guardians of legends, art and ancient history. The same road to visit them all, the SS163 Amalfitana, is itself a wonder that, like a winding ribbon, winds along the headlands for 50 km, between panoramic hairpin bends.

The very first inhabitants to set foot on the Amalfi Coast were the Etruscans who, taking advantage of the presence of natural coves and inlets, built the first ports that made this territory a crossroads of goods, peoples and cultures.
To them succeeded then the Greeks, that here founded cities like Paestum, the City of Posidonia, Elea (the future Roman Velia) and above all Neapolis. At Punta Campanella, destination for diving enthusiasts and place where the Gulf of Naples and the Gulf of Salerno merge together, there are still the remains of the Temple of Athena, built in a scenic rocky crevice. Then came the Romans, who chose the coast to build their splendid residences, with adjoining baths: perhaps the most beautiful is that of Minori dating back to I BC, built near the mouth of the river Regina Minor, of which there are still beautiful frescoes and mosaics.

The first villages begin to be born in the Middle Ages, a period during which was born the Maritime Republic of Amalfi: this is also the time of the first Saracen raids coming from the sea and the consequent construction of watchtowers, to sight the enemies in time to save the population. Many of these buildings are now ruins, others have been converted into accommodation facilities: the one that has been best preserved is the tower of Punta Campanella, commissioned by Pedro de Toledo, viceroy of Naples. About Punta Campanella, the legend enchants this enchanting place, narrating the abode of three sirens, Leucasia, Ligea and Agerola: they lived in the sea in front and with their singing they enchanted sailors, making their boats crash along the rocks.

Amalfi Coast: what to see

The symbolic village of the coast is obviously Amalfi, whose name refers to the mythological figure of the love of Hercules, buried here to be eternally cradled by the waters of the Tyrrhenian Sea. The main monument of the town is the Cathedral of Sant'Andrea, in its distinct arabesque style that blends with rococo, Romanesque and Baroque elements. To be seen also the Arsenal Museum, linked to the maritime history of the town and the Paper Museum, where it is possible to know better the bambagina, a particular and precious paper that even Federico II relegated only to private written acts.

Atrani basically represents the natural continuation of Amalfi and rises just beyond Valle dei Mulini, between Aureo and Civita mountains, right at the entrance of Valle del Dragone. In this village, in the Church of San Salvatore de' Birecto, even the dukes of Amalfi were crowned. The Grotta dei Santi, rich in Byzantine frescoes, and the Grotta Masaniello are also worth a visit. From Atrani you can easily reach the Valle delle Ferriere, a spectacular naturalistic oasis rich in tropical plants, thunderous waterfalls and fresh springs where you can refresh yourself during the hot summer days.

Positano is another of the most famous villages of the Amalfi Coast and legend has it that it was founded following the landing of the Saracens on the night of Ferragosto. The skyline of Positano is characterized by the majolica dome of the Church of the Assumption, shining when the sun's rays caress it: the view is truly spectacular from the Spiaggia Grande, located right at the foot of the village. From Positano, in particular from the hamlet of Nocelle in the hinterland, starts also the famous Sentiero degli Dei (Gods' Path) which, crossing the Lattari Mountains among spectacular views, arrives up to Agerola.

Maiori and Minori are the two localities in which there are the largest beaches, in particular that of Maiori which is in fact the largest of the entire Amalfi Coast. Minori, on the other hand, is particularly famous for the Villa Romana Marittima: it is an archaeological site related to the remains of a domus of Julio-Claudian age, with an Antiquarium rich in ancient artifacts found during excavations.

During a vacation on the Amalfi Coast you cannot miss a stop in Vietri sul Mare, beautiful with the stacks of the Due Fratelli (Two Brothers) off the coast and its colorful ceramics, to which is also dedicated a Museum inside Villa Guariglia in the hamlet of Raito. Green, blue and yellow are the ceramics which cover the dome of the Church of San Giovanni Battista, the main religious building of Vietri sul Mare.

How not to mention Ravello, situated 350 meters above sea level at the foot of Monti Lattari: this is the village where the International Festival dedicated to classical music takes place, in the light of the stay that the composer Wagner made with his wife in the 19th century. In Ravello there are the Villa Rufolo, of medieval origin and the wonderful Villa Cimbrone, from whose Terrace of the Infinity you have one of the most beautiful views of the Gulf of Salerno and the coast.

Between Conca dei Marini, one of the smallest villages of Italy and Praiano, there is Furore, a scattered commune with houses placed on different terraces cultivated with vineyards: it is here that rises the small and spectacular fjord dug in the course of time by the Schiato river.

Getting to know the Amalfi Coast means also experiencing traditions and festivals with often ancient origins, also linked to historical events that really happened: this is what happens on the occasion of the Regatta of the Ancient Maritime Republics which takes place in summer off the coast of Amalfi. The event also includes a beautiful historical procession that goes around the streets of the village, with ladies, knights, judges and soldiers.

Not to be missed, always in Amalfi, is the festival of Sant'Andrea, which takes place both in November and in June: if in autumn the believers witness the hoped-for liquefaction of the saint's blood, in summer instead they remember the miracle of the saint who unleashed a storm on the fleet of the pirate Khayr al-Dīn Barbarossa in 1544. Very beautiful and characteristic is the fishermen's race from the port to the Cathedral of Amalfi, challenging the staircase that leads inside the church.

Not to be missed is the Via Crucis (Way of the Cross) of Good Friday in Amalfi, with the procession that parades through the streets of a totally dark village, lit only by candles.
Those who love good food can take part in the summer festival in Cetara dedicated to tuna fish: this village is also linked to the famous colatura di alici, a must in the gastronomic heritage of the Amalfi Coast.

Among the other typicalities of the territory there are the IGP Amalfi Lemons, thanks to which real delicacies are prepared such as limoncello and the lemon delight of Minori. To be absolutely tasted are the sfogliatelle which, unlike what one may think, were not born in Naples but in Conca dei Marini, at the Monastery of Santa Rosa situated on a panoramic rocky ledge.

As far as handicrafts typical of the Amalfi Coast are concerned, it is impossible not to mention the ceramics of Vietri sul Mare and, above all, the linen clothes of Positano, in whose boutiques it is also possible to buy handmade sandals, crocheted bathing suits and lace skirts, for an unmistakable style which has now become famous all over the world.