Sanctuary of Our Lady of the Incancellata 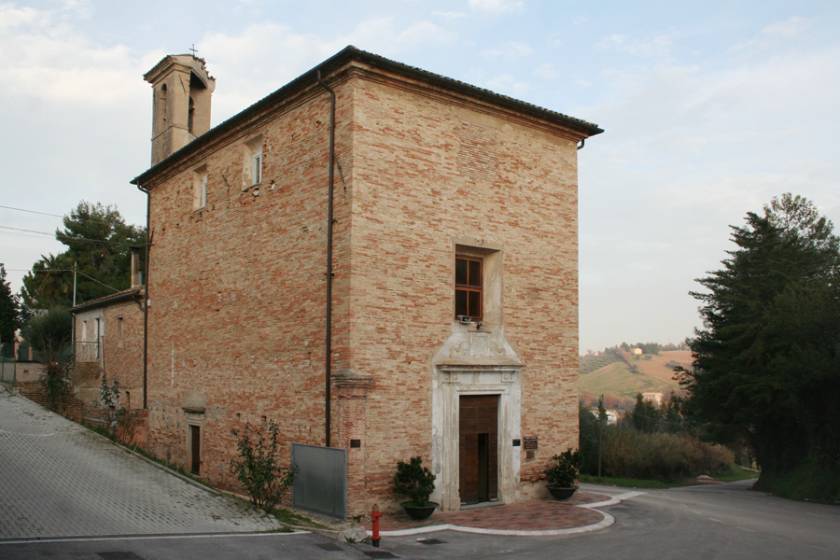 In the locality of "Casalini" or "Ancient Well" stood a small sacred aedicula where was painted an image of the Virgin Nursing the Child. This "figuretta" was the property of the family Martinelli of Corinaldo that in 1586 donated it to the Arch Confraternity of the Gonfalon of Corinaldo, already the owner of the Church of Santa Maria di Piazza.

In subsequent years the newsstand, placed downstream with respect to the current church, was transported where it currently stands and around it was built a first small chiesina that corresponds to today s presbytery delimited by the railings. Subsequently the rush of a large number of faithful and pilgrims who came to adore the holy and miraculous image convinced the confreres of the Gonfalon to erect a house for the guardian and a loggia for shelter for pilgrims, then transformed into a church.

Before it ran a small rivo water that was conveyed in a well inside the church and from which came the miraculous healings. The prelates, cardinals, principles together with simple men flocked numerous to venerate this sacred Icon and for drinking or bathing in this miraculous water. In 1690 the church was completely rebuilt, except the part behind the railing, built in 1625 in the current forms and precisely on that occasion the rector of then, Don Filippo Fontini, did paint the San Gaetano now placed in the altar to the right. The Sanctuary of Our Lady of the Incancellata of Corinaldo, is the church where Santa Maria Goretti went to pray.

The fresco of the Madonna del Latte, above the high altar, was restored in 2007 and has highlighted two ridipinture between which the primitive image of the Madonna dating back to the late renaissance of school from Umbria and Marche, probable school of Pinturicchio.

Cà le Cerque
A lovely villa nestled in the typical hilly landscape of the Marche region in the village of Foss...

Via Antonio Cecchi, 12, Fossombrone (Pesaro e Urbino)
17.40 Kilometers from Sanctuary of Our Lady of the Incancellata
B&B Casa Sponge
B&B Casa sponge is a small corner of tranquility and art immersed in the hills around the Pergola...

Loc.tà Piano di Rocchetta, 12, Genga (Ancona)
22.48 Kilometers from Sanctuary of Our Lady of the Incancellata
Cupramontana-Accoglie
A tourist information centre that aims to be at the disposal of visitors who want to spend happy ...

60034, Cupramontana (Ancona)
24.16 Kilometers from Sanctuary of Our Lady of the Incancellata
Hotel Le Grotte
In the wonderful village of Genga, Hotel Le Grotte is a luxury 4 star hotel immersed in the beaut...

Pontebovesecco - 60040, Genga (Ancona)
29.42 Kilometers from Sanctuary of Our Lady of the Incancellata
Cupramontana-Accoglie
A tourist information centre that aims to be at the disposal of visitors who want to spend happy ...