Share
Small medieval village at the top of a hill Lucignano is characterized by its shape, concentric rings, and an important artistic, landscape and food and wine heritage. 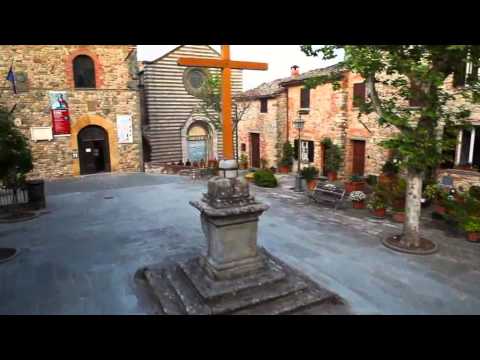 Lucignano is a small medieval village at the top of a hill on the border between the ancient possessions of Florence, Arezzo, Siena and Perugia, which made it strategically important since ancient times.
The village, with the plant in concentric rings, has an important artistic, landscape and food and wine heritage.
Also Lucignano, like all the other frontier lands, has undergone various cultural influences.
The artists who made the works of art preserved today in the Municipal Museum are predominantly Sienese, including the imposing Golden Tree, also called Tree of Love.A jewel of medieval jewelery, before which young lovers once declared their eternal love.
In the central Piazza del Tribunale the buildings that hit the visitors are the church of San Francesco, the Collegiate Church of San Michele Arcangelo and the Palazzo Comunale, which houses the museum.

The architectural appearance of Lucignano is quite strange, species for the considerable difference between the buildings of the two parts of the historic center. Entering in fact from Porta San Giusto extend two streets: via Roma which is directed to the left and via Matteotti which instead turn toward the right. The first is traditionally known as "Poor Alley", as formerly resided therein families more humble, and is distinguished by the presence of buildings in medieval times by the small size. The second one is called "Rich Alley" and here lived a time the noble families of the village, as witnessed by the elegant buildings in renaissance style.

Looking at the village from above, the eye can only be struck by the spotted covers the roofs of the houses, which draw circles long and narrow, as a shell, building a plant elliptical in concentric rings. As a cap on the top of a hill, Lucignano has the form of such harmony and beauty, that it can be taken as a model as a perfect medieval village. Entering in the historical center the lively atmosphere that typical products shops give to the place surrounds and infects the visitor, that, while he arrives at the central square, is lost between the renaissance palaces of the Strada dei Cavalieri. But Lucignano is also narrow streets and houses of bricks of modest make because, although in its unity and harmony, the village in the centuries has not been able to prevent that human game of parties which causes inevitably the city to divide between "Districts" and "poor neighborhoods". Yet today, no matter what social class you belong, in spring, in Lucignano thousands of flowers fill the sky and fly over our heads, launched by the inhabitants of the quarters that parade through the streets of the city center on floats. Accompanied by musical groups and joyful vivacity, give life to a true and proper "Battle of Flowers": it is the traditional spring festival or Maggiolata, that the inhabitants of the place, but also tourists, are waiting impatiently for the whole year.

Via della Madonna, 2, Loro Ciuffenna (Arezzo)
36.29 Kilometers from Lucignano
Venturino Venturi Museum
The Museum Venturino Venturi is situated on the ground floor of Palazzo Comunale in the village o...

Piazza Matteotti, 5, Loro Ciuffenna (Arezzo)
36.60 Kilometers from Lucignano
Galbino Castle
Feudal residence of the Barbolani counts of Montauto until the 18th century, the Galbino castle i...

52031, Anghiari (Arezzo)
36.91 Kilometers from Lucignano
Badia di Sant'Andrea
The Badia di Sant’Andrea is situated along the way that leads to San Clemente from the village of...

Strada Provinciale di Pieve a Salti , Buonconvento (Siena)
24.22 Kilometers from Lucignano
Albergo Casentino
Casentino is a heap of suggestions and values in which humans and environment are still able to h...

Piazza Repubblica, 6 - 52014, Poppi (Arezzo)
49.82 Kilometers from Lucignano
Borgo Palace Hotel
The Borgo Palace Hotel in Sansepolcro is a structure of great prestige. It offers many services ...

Via Senese Aretina, 80 - 52037, Sansepolcro (Arezzo)
44.99 Kilometers from Lucignano
Parc Hotel
The best starting point to discover the wonders of the Casentino valley and breathe the air of th...

Via Roma, 214, Poppi (Arezzo)
50.33 Kilometers from Lucignano
Fattoria Poggio di Dante
A place situated in the nature of Casentino.

Memories of the past

Rally of the Musical Bands

Popular Day of the Cross

Landscapes, views and paths through the villages of love
The Cinque Terre are an imaginary heritage of the soul, and for those who love a sensory journey with romantic notes, the Ligurian coast and the villages of Lucignano and Varenna are rich in landscapes, views and paths capable of satisfying the 5 senses and the emotion that synthesizes a unique experience: love.The eastern coast of the Cinque Terre is steeped in the scents of its cuisine of land and sea, which have made it a UNESCO World Herit...
Continue