Share
A typical medieval village which today preserves a remarkable historical center of Etruscan origin. Volterra is rich in artistic evidence of great importance, to be admired walking through the streets of the historic center and visiting the city museums, such as the Etruscan one, the Pinacoteca, the Museum of Sacred Art, or the Ecomuseum of Alabaster.

A look at Volterra 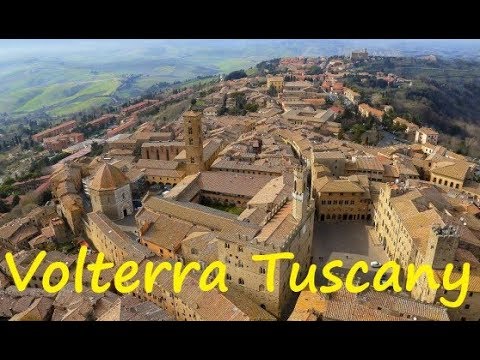 Volterra was one of the main city-state of the ancient Tuscan (Etruria), was established in the Middle Ages an important episcopal lordship having jurisdiction over a large part of the tuscan hills. Today it preserves an important historical center of Etruscan origin (this time remains the door to the arc, beautifully preserved; the Door Diana, which preserves the blocks of the jambs; most of the defensive walls built with gigantic blocks of local stone; the Acropolis, where there are the foundations of two temples, various buildings and some tanks; many hypogea used for the burial of the dead), with roman ruins (among all the theater in a hemicycle) and medieval buildings such as the Cathedral, the Fortezza Medicea and the Palazzo dei Priori on the homonymous square, the neuralgic center of the village. Veláthri (the Etruscan name of Volterra) was part of the Etruscan confederation, said Etruscan Dodecapoli or lucumonie. The king (and the great priest) was said luchmon (lucumone). The name of the etruscan town is clearly legible in the series of coins preserved at the Guarnacci Museum. In latin the city took the name of Volaterrae, from which derives the greek Οὐολατέρραι (Ouolatérrai) and the current Italian name.

The hill on which it stands Volterra was already inhabited during the first Iron Age, as is confirmed by the large villanoviane necropolis of Ripaie and Guerruccia, situated on the slopes that look to the west and north. The settlements are present along the hills found their meeting point in the area of the necropolis where, around the end of the VIII century B.C., it began to hold markets and to provide areas of worship, giving life to the process of sinecismo that originated in the first urban nucleus. Velathri was one of the twelve cities of the Etruscan confederation and starting from the second half of the VI century B.C. grew the walls in defense of the acropolis until reaching a circumference of about 1800 meters, in practice the floor below the peak of the hill; this process was completed at the beginning of the V century B.C. the city walls, still today for most visible, were built at the end of the IV century B.C. and had an extension of 7300 meters. In addition to the increased urban center protected also sources, fields and pastures necessary to survive the flocks of the inhabitants of the surroundings that they trusted inside to save themselves from the looting that often the Gauls and the Liguri carried out in these areas. From the IV century B.C. onwards the archaeological finds increase, and it is possible to trace the history of the city that reached its maximum splendour when the Etruscan cities of southern Europe (Veio, Tarquinia, Cerveteri, Vetulonia etc..) started to decay because of their proximity to the nascent power of Rome. Volterra was placed much more far and especially was situated on a hill hardly accessible and protected by massive walls. In that period the city had a great development of its economy based on the exploitation of copper and silver mines located nearby; beyond that of minerals the territory of Volterra was rich in pastures, forests and agricultural activities. The nearby River Cecina and its valley were the natural route of communication toward the sea and favored also trade. The social and political life was dominated by the local aristocracy, headed by the family of Ceicna, who knew how to ensure a considerable prosperity and also a certain independence. The city maintained good relations with Rome and during the Second Punic War gave to Scipione wheat and ships. The fidelity was rewarded and in 90 BC the volterrani obtained the roman citizenship.

In the following centuries the city was governed by the Lombards and the Franks until arriving at the IX-X century when it began the temporal power of the bishops, who touched its culmination in the era of Galgano Pannocchieschi, Bishop and governor of Volterra on behalf of Federico Barbarossa. His despotic rule was also the cause of the beginning of the revolt against that power. The same Galgano was massacred by inferocito people on the threshold of the cathedral in 1170. The heads of the revolt anti-Bishop were the local feudal lords and the exponents of the nascent bourgeoisie Comunale. In 1208 was begun on the construction of the Palazzo dei Priori, the symbol and the seat of the municipal power. The town of Volterra was surrounded by powerful neighbors such as Florence, Siena and Pisa in full territorial expansion, but thanks to a wise policy of good relations knew how to secure the independence. The final submission of Volterra came about in 1472. Two years before had been discovered of alum mines whose exploitation had revived the family feuds among the nobles Volterrani. Lorenzo il Magnifico will avail itself and is lined by a part of the family Inghirami even if in reality it was Florence and he himself who wanted the control of mines. To restore order in the city was sent an army composed of 7000 men headed by Federico da Montefeltro; The soldiers put to iron and fire Volterra, sacked horribly and also threw down almost all tower-houses. To check definitively the city was enlarged the fortress where was built also the tower called the Donjon, symbol of Florentine power.

The Seventeenth and eighteenth centuries were centuries in which the town underwent a major demographic decline caused by the economic crisis that struck the Tuscany of time and accelerated by the plague of 1630 and of 1656 but also by the disastrous drought of 1732. In this period of great crisis to be noted is the presence in the city of painter Salvator Rosa, that visitor of family Maffei from 1654 to 1657, left here some of his works. A recovery took place after the passage of the Grand Duchy to the Lorraine. In the eighteenth century alabaster found new commercial outlets and the economy of the city it benefited. In 1796 the city was occupied by the French troops but in 1802 troops loyal to the Grand Duke conducted by Inghiramo and Curzio Inghirami drove out the French. But lasted a little, in fact after the annexation of the Grand Duchy to France, Volterra became a napoleonic sottoprefettura. This was in fact lasted from 1808 to 1814 and in this period several works of art were stolen from the city. The return to power of Lorraine in 1814 coincided with a moment of economic recovery and demographic growth. In the following years it had the industrialization of the production of salt and the great development of the Manifattura linked to the working of the alabaster.

The Cathedral of Volterra in Romanesque style, was raised on several occasions between the XII and XIII century. In front of the Duomo is the Baptistery of San Giovanni, built in the second half of the thirteenth century. The Roman Theater was brought to light in the fifties from archaeological excavations conducted in the locality of Vallebuona. The monument is given at the end of the I century B.C. and its construction was funded by the rich family of Caecina Volterra. The theater was partially excavated in the natural slope of an elevation, in analogy to the Greek theaters. At the end of the III century the theater was abandoned and in the vicinity of the scenic building was installed a thermal plant. In the medieval era, the city walls inglobarono the wall for closing the highest part of the tiers of seats (summa cavea).

"City of wind and rock", writes of Volterra Gabriele d Annunzio; city "hard, of iron, open to the sun and to the winds as an ancient tragedy", describes the critic Cesare Brandi.
Volterra can be seen from afar, is up there at the top in a part of Tuscany with few trees and valleys open like a book. It stands on the cliff, Volterra: with a single glance you can admire the magnificent erosions of the Balze, dramatically tangible sign of the unstoppable erosion of the rock that holds the city.
Already dominated the heights of the Valdera and val di Cecina, the ancient Velathri, chief town of one of the twelve Lucumonie of Etruscan territory, that already in the V century B.C. was surrounded by walls. Essential is a visit to his Guarnacci Etruscan Museum, among the richest in Italy.
The subsoil of the city is rich in rock salt and gypsum. Gypsum is present in different forms and one of these is the alabaster, true resource of the city and of its craftsmen. On entering the Minucci house-tower, today eco-museum of the alabaster, we discover every secret of it.
Collected inside the walls, finally, the historical center: the beautiful squares and streets in slope, tower-houses, join the medieval charm to the remote of the ancient founders, by attracting centuries writers, poets and directors who, inspired by the exceptionality of the village, far from Tuscan stereotypes, have put the village in their works. The fortress, symbol and instrument of Florentine power, stands on the highest point of the city.

the Municipality is part of:
Città del tartufo

Via Paolo Mascagni, 43, Pomarance (Pisa)
11.51 Kilometers from Volterra
Sillana Fortress
The Sillana Fortress is a fortification dating back to the XII century the village of Pomarance, ...

Strada Comunale di Lanciaia, località San Dalmazio, Pomarance (Pisa)
15.42 Kilometers from Volterra
The collegiate church of Santa Maria Assunta
The primitive church was built inside the Castle of Casole, a village that drew its wealth from b...

Piazza della Libertà, 32, Casole d\'Elsa (Siena)
16.24 Kilometers from Volterra
Palazzo Pretorio
In the middle of the road that connects the imposing fortress to the Collegiate Church of Santa M...

Via Don Pietro Nardini, 14, Casale Marittimo (Pisa)
22.84 Kilometers from Volterra
Vicarials Castle
The Vicarials Castle is located in the village of Lari, in Tuscany.

4 villages not to be missed for designer craftsmanship
An extraordinary offer of craftsmanship, that of Italian villages, which includes ancient techniques and manual skills. Craft creations that in their creative forms give shape to typical works of their territories, becoming protagonists of themed itineraries that go beyond the playful aspect. Here, then, four villages in which the discovery of local crafts is worth a trip. Volterra (Tuscany) It is perched on the hills that separate th...
Continue
Itinerary outside of Pisa: a weekend between Casale Marittimo and Castelnuovo Val di Cecina
Amongst the most beautiful Tuscan and Italian cities, Pisa has glimpses of rare beauty, so that, as you move away, you often want to turn around to look again to look up at the tall top of the leaning tower, dominating one of the most beautiful corners in the world for its architectural content. The extraordinary nature of Pisa and its territory has, not only priceless artistic treasures, a history that dates back to the times of the Mariti...
Continue
The witches of Volterra and other mysteries
Thinking of Volterra, the collective imagination flies immediately at very remote times, tied to the Etruscan people who ruled the Balze, but how many people know that the history of this villageis also filled with magic and mystery? The magic in Volterra is born in ancient times and is closely linked to the world of witches and evil. It seems that the first ever witch has lived here. She was called Aradia, the daughter of Goddess Diana, who was sent to earth by her mother to teach sorcery to humans, who at that time had g...
Continue