Share
Bobbio is located on the left bank of the Trebbia river and its history is linked to that of the Abbey of San Colombano founded by the Coenobite monk Colombanus. The symbol of the village is the Ponte Gobbo or Ponte del Diavolo, built entirely of stone in Roman times, which connects the village to the other side of the river and from it. 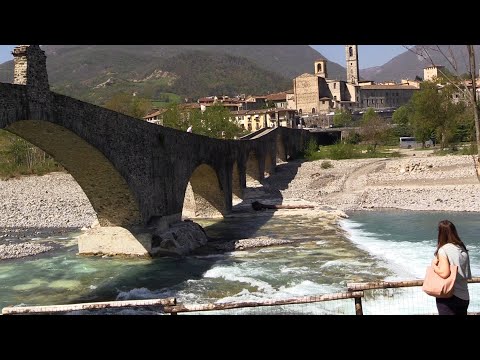 Bobbio is situated on the left bank of river Trebbia, in an area rich in water and settlements since the Neolithic era.

The numerous finds testify the presence of various populations: Ligurians, Celts and after 14 B.C. the Romans.
The nucleus of Bobium rose in 14 B.C. but its history is inextricably linked to the one of the Abbey of San Colombano founded by the cenobite monk Columbanus who reached it in 614 when it received this territory as a gift from the Langobard King Agilulf.

It was a donation of great political significance as Bobbio controlled the great caravan route, the salt road, that from Piacenza, along the Valtrebbia reaches Genoa - a cornerstone of the Byzantines. In Bobbio, Columbanus found only a small-dilapidated church, dedicated to Saint Peter, and decided to restore it. The convent rapidly became populated: already in 643 it counted 150 monks. The first houses inhabited by citizens rose around it.

The Abbey of Bobbio, with its schools, its library, his Scriptorium and its economic organization, quickly became a political power too. Bobbio possessed goods in Valtrebbia, Val Staffora, Val Tidone, val d'Aveto, in the Liguria region, Monferrato and the Langhe, and arrived also at the gates of Turin, around Lake Garda, from Salò to Bardolino, on the Lakes of Mantua, in Piacenza, Ravenna, Genoa, Lucca and Pavia. A rich feud in which the manorial system reached its perfection.

The area, on which the inhabited part develops, is bordered by the River Trebbia and dominated by the Sanctuary of Madonna del Penice, which is located on the namesake mountain. The heart of the village has maintained the medieval architecture perfectly intact.
The symbol of the village is Ponte Gobbo (or the Devil’s bridge), entirely built in stone in Roman times, with a particular profile consisting of 11 irregular arches. The bridge connects the village to the other side of the river and from it, with a brief and suggestive walk on its 'bumps', you can admire the profile of the village, the Monte Penice and the territory surrounding the Trebbia.

In the shops of the old town centre, you can find many typical products of the area, from local wines to jams or organic honey produced by local companies. But also a wide choice of local meats or sweets and bakery products such as tasty salty donuts or the famous almond cake, or even the fragrant porcini mushrooms picked on the surrounding mountains and the truffles. Instead, for those who are looking for a handicraft souvenir in Contrada dell’Ospedale you will find the workshops of carpenters and local artists where you can find artefacts or paintings depicting picturesque corners of the city.

In addition to being rich in art and culture, Bobbio boasts a long series of typical local dishes (that represent the culinary tradition of Piacenza) that have been handed down from many generations, and represent another typical feature of the socio-cultural melting pot that benefited from during the centuries. You should taste the maccheroni alla bobbiese, fresh pasta handmade by using a knitting needle dressed with a stew sauce. The snails alla bobbiese, traditional Christmas Eve dish that you can often find in the winter period and the delicious brittle made with almonds and sugar with which the skilled hands of local producers know how to make surprising shapes. And also pine nuts with ricotta or pìn (in dialect pé da lésa: slide foot, for the typical shape), green gnocchetti with ricotta cheese, traditionally served with a mushroom sauce; brachettone alla bobbiese (bràcton, a stuffed pig’s trotter made with pork shoulder, pickled or aged).

Village of Bobbio
Municipality of Bobbio

The Abbey of San Colombano
Founded by Saint Columban in 614 with the favor of the king Longobard Agilulfo and Teodolinda, ho...
Piazza S. Colombano, Bobbio
The Sanctuary of Santa Maria in Monte Penice
Place in a particularly panoramic place, from its large square you can enjoy a wide view not only...
Località Penice Vetta, Bobbio
Bridge Gobbo
According to the legend, the Devil contacted San Colombano, promising to build the bridge in one ...
Via Ponte Vecchio, Bobbio
Malaspina-Dal Verme Castle
Today of the original building only the central quadrangular keep remains.
Strada del Torrino, 1/3, Bobbio
Cathedral of Santa Maria Assunta
Bobbio's Cathedral of Santa Maria Assunta was built in the eleventh century but extensively alter...
Piazza Duomo, Bobbio
Saint Lawrence Church
The first mention of this church dedicated to San Lorenzo dates back to 1144.
Via S. Lorenzo, Bobbio
Memories' Warehouse
through a path of daily life the Memories' Warehouse allows the vision of more than a century of ...

Via Vittorio Emanuele, Cascina Mirani, Zavattarello (Pavia)
14.26 Kilometers from Bobbio
Church of St. Paul the Apostle
The Church of the patron St. Paul of Zavattarello, in Lombardy, is already named in 929.

Via della Chiesa, 2, Zavattarello (Pavia)
14.40 Kilometers from Bobbio
Dal Verme Castle
from the terrace of Dal Verme Castle, in Lombardy you can enjoy a breathtaking view of the surrou...

Via Carlo Dal Verme, 4, Zavattarello (Pavia)
14.82 Kilometers from Bobbio
Whites' Church
The Whites' Church of Varzi, in Lombardia, is located in the heart of the village.

Via di Dentro, 9, Varzi (Pavia)
15.98 Kilometers from Bobbio
Reds' Church
The Reds' Church is located in the village of Varzi in Lombardy.

Via di Dentro, 2, Varzi (Pavia)
16.01 Kilometers from Bobbio
Capuchins' Church
The Capuchins' Church, dedicated to San Germano, is located in the village of Varzi, in Lombardy.

Via Cappuccini, 1, Varzi (Pavia)
16.66 Kilometers from Bobbio
Museum of the Donjon
the Donjon was the extreme defense of the fortress of Vigoleno, in Emilia Romagna.

Via Libertà, Castello di Vigoleno, Vernasca (Piacenza)
41.13 Kilometers from Bobbio
Visconti Fortress
Built on the initiative of the city of Piacenza in 1342, the Visconti's Fortress of Castell'Arqua...

Via Caneto, Castell'Arquato (Piacenza)
40.52 Kilometers from Bobbio
Casa Benna
From the end of 90’s onward, continuous improvements have been made with regard to vineyard culti...

La Rocca Delicatessen, Castell'Arquato (Piacenza)
Fiocco di Prosciutto "Il Cortigiano"
The fiocco di prosciutto is the walnut of smaller meat at the side of the femur.

La Rocca Delicatessen, Castell'Arquato (Piacenza)
Lo Strolghino
The strolghino was used to check the seasoning of the most valuable and bigger salami.

La Rocca Delicatessen, Castell'Arquato (Piacenza)
Culatta
The Culaccia "Il Mandolino" comes from the same part of the Culatello: the most valuable part of ...

La Rocca Delicatessen, Castell'Arquato (Piacenza)
Salamino l'Alfiere
Known by the name of "Cacciatorino", seasoned and of small size, to be easily transported in the ...

Cribs in the Contrade

Bobbio, the village of enchantment
Stone-built houses and stately palaces, narrow streets, a village that grew up around the monastery where you can still enjoy the charm of the Middle Ages. And then the views drawn by nature and, all around, a valley that breathes the sea of nearby Liguria and offers unforgettable views. We are in Bobbio, which stands in a privileged position on the left bank of the river Trebbia, in the province of Piacenza. A place rich in history, in which ...
Continue
Guercino, history and mysteries
Piacenza is synonymous with enchanted villages, with Bobbio, Castell’Arquato and Vigoleno that stand out in the mosaic of the territory and tell an ancient story. And it is no less Piacenza, whose cathedral houses in its beautiful dome the precious frescoes of Guercino: a treasure trove of secret places and historical-artistic routes. You can admire the cathedral of Piacenza in a privileged position from the roof top of the "Lounge Bar L...
Continue
Emilia Romagna: the village of Bobbio, land of snails at the Bobbiese.
The Ponte Vecchio is the undisputed symbol of Bobbio, an ancient Roman center of the Trebbia valley. From the irregular profile, the stone bridge is 273 meters long and is also called Ponte Gobbo for its particular irregular profile, consisting of 11 arches placed at different heights and unequal to each other. It is hypothesized that during the Roman conquest of what was once a Ligurian-Celtic village, and unmissable, for those who come from these parts, it is to follow it, even several times, to enjoy the suggestions that transmits, in ...
Continue
Recipe: Bobbio's Maccheroni
Typical dish of the village of Bobbio and of the Val Trebbia, the macaroni at the bobbiese have the peculiarity to be obtained by rolling pasta strips around a knitting iron (or a large needle or crochet needle) that will be removed before the cooking. This traditional dish ties women's home work with the passion for cooking. The sauce for these macaroni can be a mushroom ragout or a stew sauce, which we will see today in the recipe. Macaroni at the bobbiese are a delicacy with a very ancient past.
Continue
Recipe: Bargnolino the typical liquor in the provinces of Parma and Piacenza
Bargnolino is a typical liquor in the provinces of Parma and Piacenza, which is named after its main ingredient: the berries of the Prunus Spinosa plant, a shrub from with spiky branches that produces blue fruits, vulgarly called prugnolo or black thorn, but in Piacenza’s dialect, everybody calls it bargnò. It is an intense alcoholic and digestive drink that has to be tasted lowly with great moderation. Its preparation begins at the end of September with the harvest of berries, which in this period r...
Continue
Summer 2020, Travel in Italy: the villages, ideal destinations to visit in the post-coronavirus
From today, May 4, the restrictive measures imposed by the government during the lockdown period will begin to be eased. Many regions, for example, will allow you to move within your territory to walk to the sea or to the mountains. These will be the first steps for a gradual recovery to normal, while respecting the distance and the use of masks to block the spread of the covid 19. In the meantime, less than two months are left at the beginning of summer 2020. "Travel in Italy" it is the slogan that recurs most often in the media, as well...
Continue