Share
Known for being the birthplace of the greatest genius of the Italian Renaissance, Vinci is the ideal place to spend a day full of culture, but also to explore the countryside with its vineyards and olive groves, loved by Leonardo.

Leonardo Da Vinci at museum in his birthplace

The home of Leonardo da Vinci 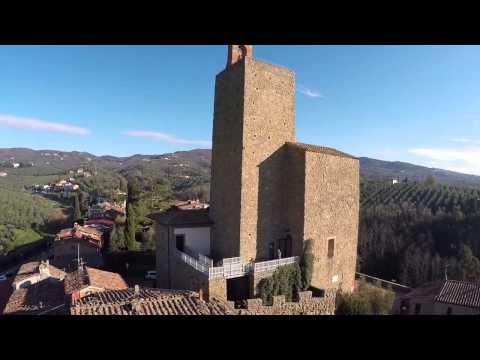 The village of Vinci, near Florence, is situated on the slopes of Montalbano, massive hills rich in vineyards and olive groves and terraces supported by the characteristic dry walls. The most ancient part of Vinci presents a plan in the form of almond, unusual in this area of Tuscany. Looking at it from top, it seems a two-shafts boat (where the two trees would be the tower of the Fortress of the Counts Guidi and the bell tower of the church of Santa Croce). The historic center of the village of Leonardo da Vinci is known, for this reason, also as "Castel Ship".

Vinci is the village where Leonardo was born, and therein lies the Biblioteca Leonardiana, international center of Leonardo studies, and the municipal Museo Leonardiano di Vinci, wide and prestigious collection of models of inventions leonardiane realized inside the Palazzina Uzielli and of the Castle of the Counts Guidi, a wonderful medieval fortification dating back to the XI century. Here he also seat of the Ideal Museum of Leonardo Da Vinci, dedicated to the deepening of the topicality of the figure of Leonardo and the complexity of its work of artist, scientist, inventor and designer. To see, along the hilly track toward Lamporecchio, the Garden of Leonardo and the Utopia, of which the Ideal Museum is treating the realization.

Perched during the centuries around the castle founded by the Guidi Counts around the year 1000, the village almond-shaped is a special place where everything speaks of Leonardo. On the figure and the works of the great inventor focus most of the attractions of this city, however not less equipped with other beautiful landscapes and monuments. Olive groves and vineyards spread their delights everywhere in the fertile countryside surroundings, while sumptuous villas lie behind the thick curtains of cypresses and pines.
The visitor who comes in the country will not neglect the Museum and the Biblioteca Leonardiana, hosted in the fortress of the Guidi Counts. The Museum, one of the most important and most visited in Tuscany, preserves a wide and prestigious collection of models of inventions of the great genius: here is an apparatus for projections, a helicopter, a parachute, hydraulic machines and military… dozens of models of tools from the most varied uses, presented with precise references to the drawings and the handwritten annotations of the artist.
Walking through the alleys and trails plunges us, then, in the green countryside in where Leonardo wandered in contemplation, while his tireless mind sought inspiration for ever new and curious applications. You will finally reach, along the ancient "strada verde", to the fraction of Anchiano, where you can visit the birthplace of the great man of Vinci.

The Municipality of Vinci
Province of Florence
Tuscany Region

The castle of the Counts Guidi
The Castle of the Counts Guidi in the village of Vinci, near Florence, from 1953 houses the Museo...
Via del Castello, 10, Vinci
The Biblioteca Leonardiana
the Biblioteca Leonardiana in the village of Vinci possesses the facsimile of all manuscripts and...
Via Giorgio La Pira, 1 , Vinci
Leonardian Museum
The Leonardian Museum of the village of Vinci is one of the collected more spacious and original ...
Piazza dei Conti Guidi, 1, Vinci
Leonardo Da Vinci's Ideal Museum
The Leonardo Da Vinci's Ideal Museum is a research yard, rediscovery philological and creativity.
Via Montalbano, 2, Vinci
Birthplace of Leonardo Da Vinci
The birthplace of Leonardo is a building situated in the locality of Anchiano, at 3 km from the v...
Via di Anchiano, località Anchiano, Vinci
Sanctuary of St. Mary of the Oaks
The Sanctuary of St. Mary of the Oaks is located near the village of Lucignano, in Tuscany.

Via Roma, 3, Montecarlo (Lucca)
21.82 Kilometers from Vinci
Theatre of the Reassured
In the Teatro dei Rassicurati of Montecarlo concerts and performances of prose and amateur theatr...

Piazza dei Vicari, Scarperia (Firenze)
41.46 Kilometers from Vinci
Church of Saint Thomas
The church of Santo Stefano of the village of Montefioralle, in Tuscany, has a gothic structure r...

Via Michele di Lando, 12 - 50033, Firenzuola (Firenze)
51.87 Kilometers from Vinci
Bacciotti Agricultural Company
On the hills of Mugello, in the municipality of Scarperia in Florence, is the Società Agraria Bac...

Via di Gabbiano, 7 - 50038 , Scarperia (Firenze)
41.30 Kilometers from Vinci
Coltelleria Saladini
The ancient medieval town of Scarperia was founded by the Republic of Florence on 8 September 130...

Montelupo Fiorentino: gems of Tuscany
Magnificent and munificent, Tuscany, a region studded with precious jewels: the villages of memory, a unicum of history, traditions, legends, customs and folklore. Starting from its capital, Florence, in whose territory, among the numerous, Vinci, Barberino Val d’Elsa, Certaldo, Montefioralle and Scarperia stand out. And then Montelupo Fiorentino, whose manufacturing tradition is also found in the gastronomy that goes from the past to to...
Continue