Share
Whoever arrives in the Itria Valley and is in this village remains enchanted with the beautiful beauty and magnificence of its Trulli. Hilltop village, bordering Locorotondo, Martina Franca, Putignano, Noci and Castellana Grotte, Alberobello is a tangle of winding alleys, with more than 1000 trulli, small stone houses without white windows with a gray cone roof. 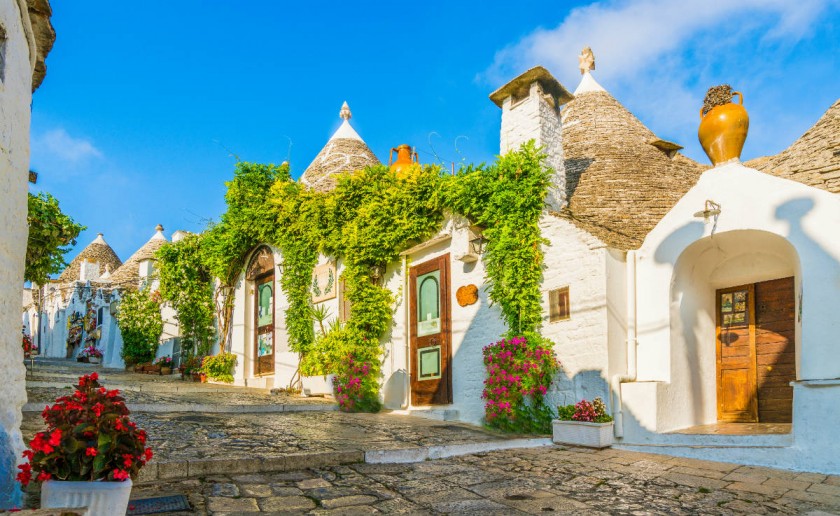 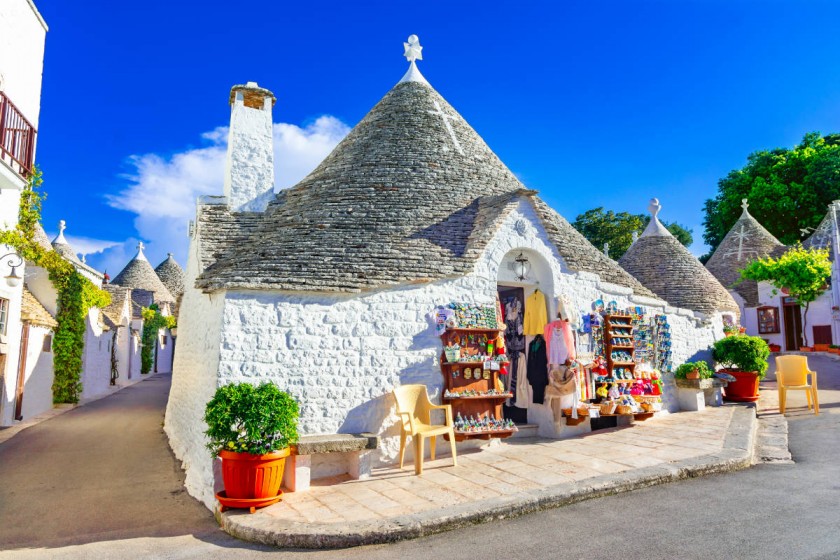 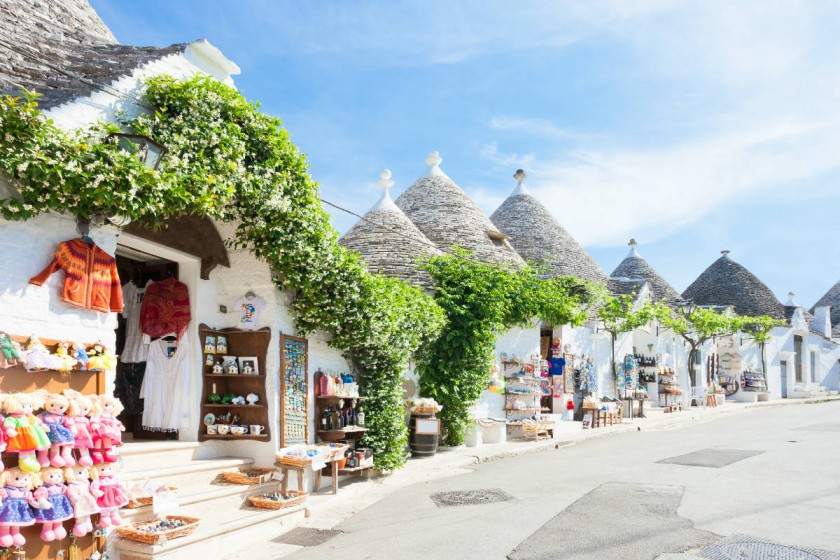 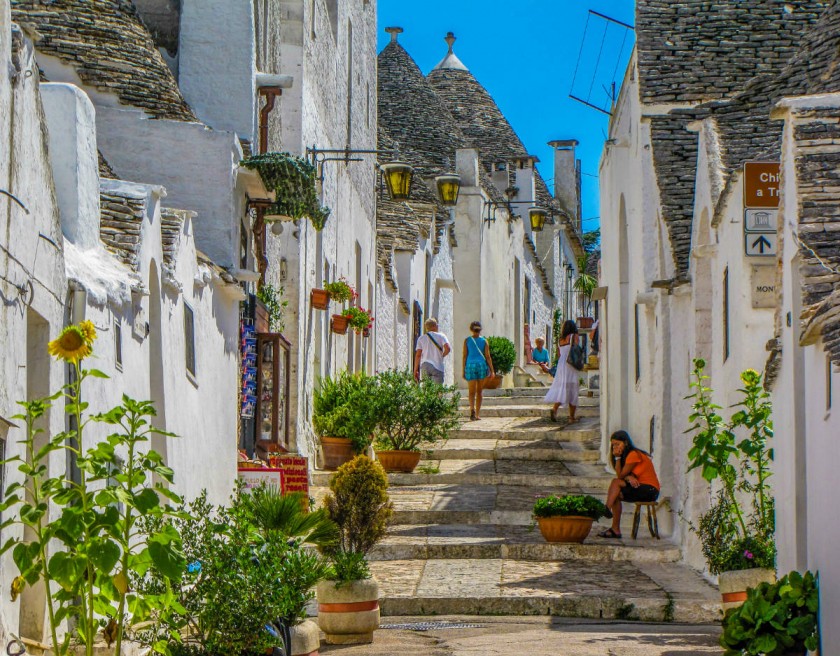 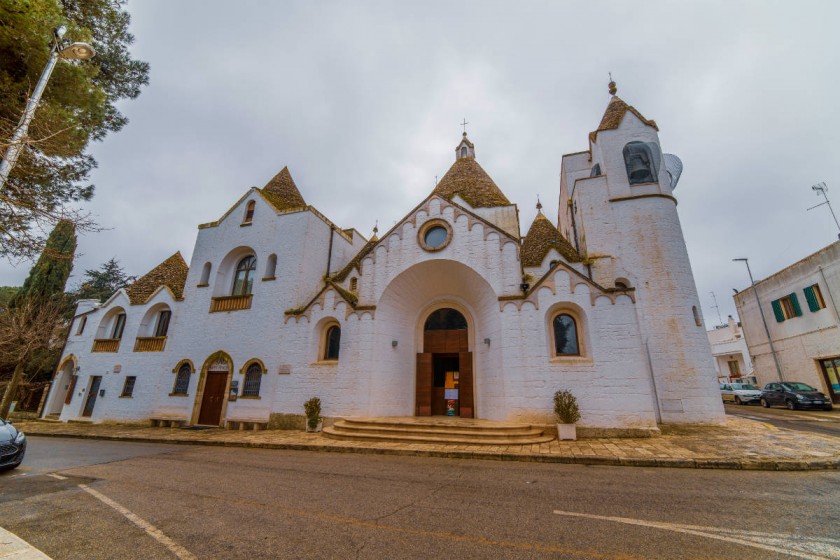 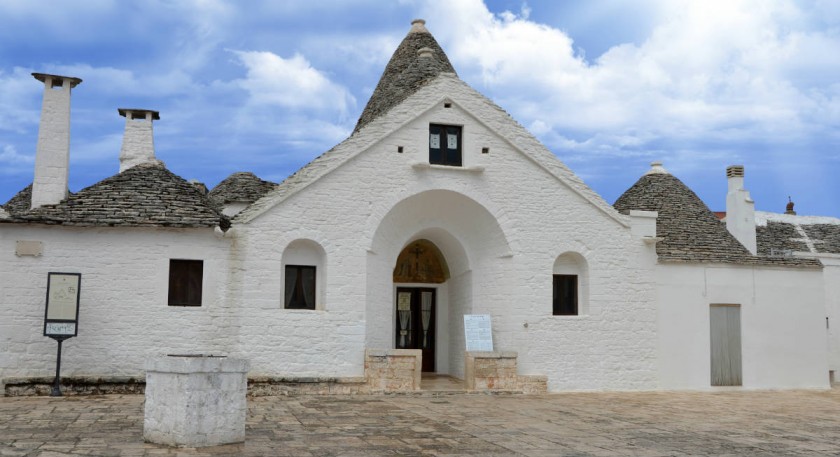 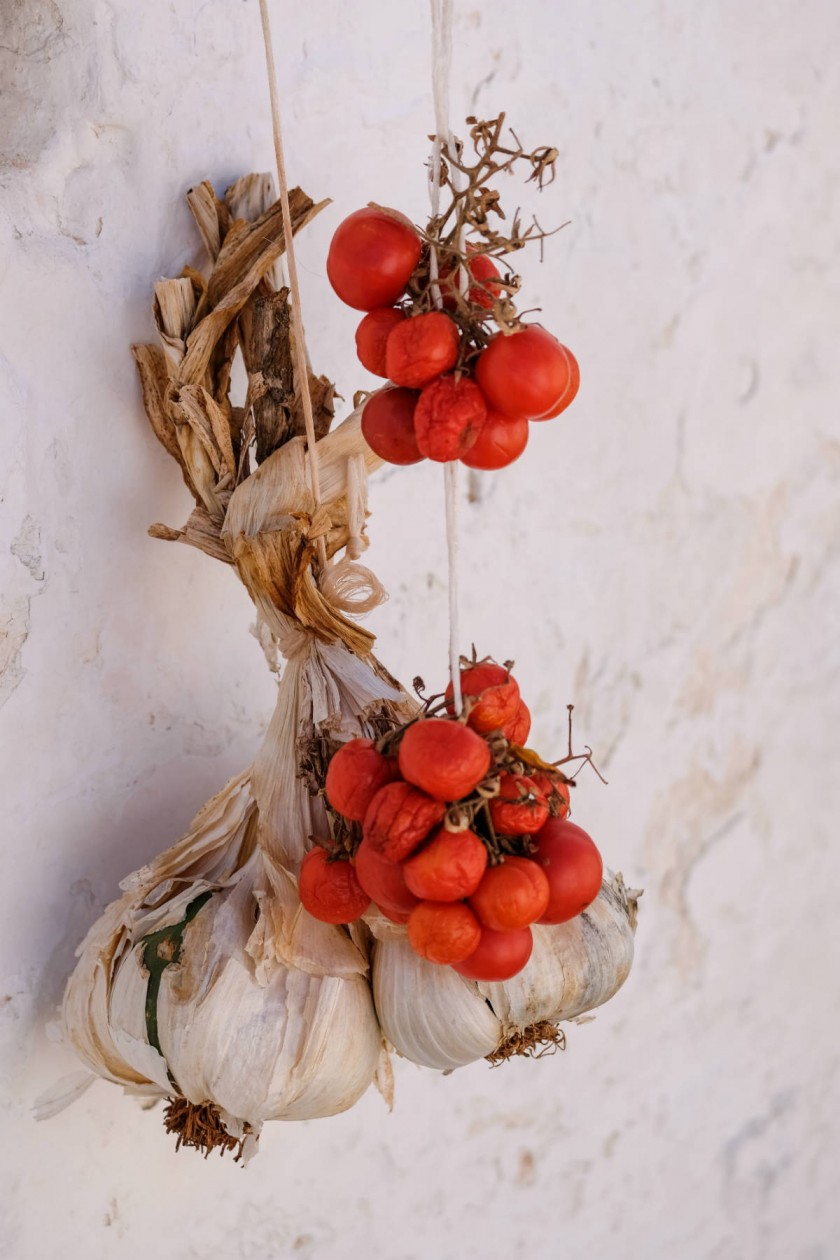 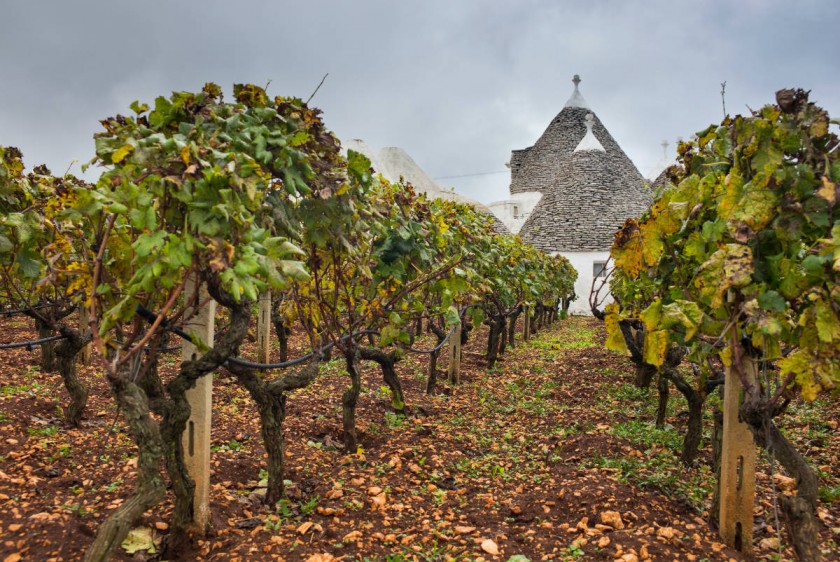 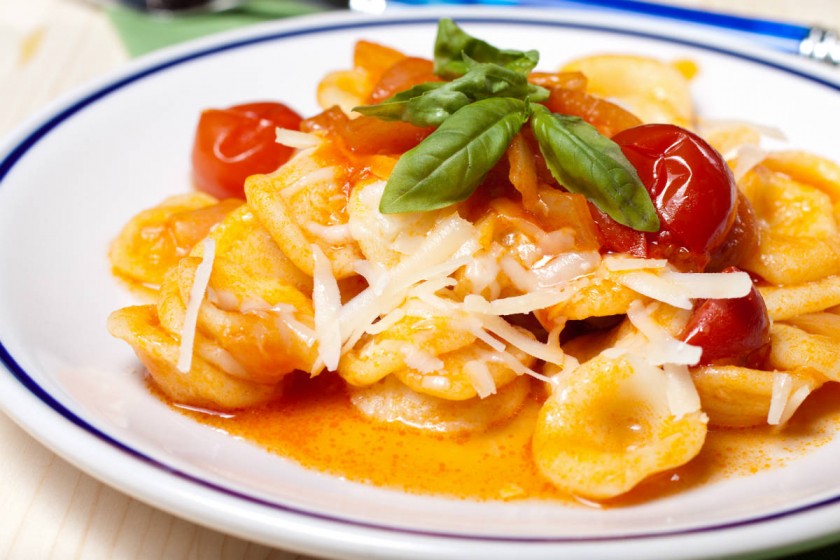 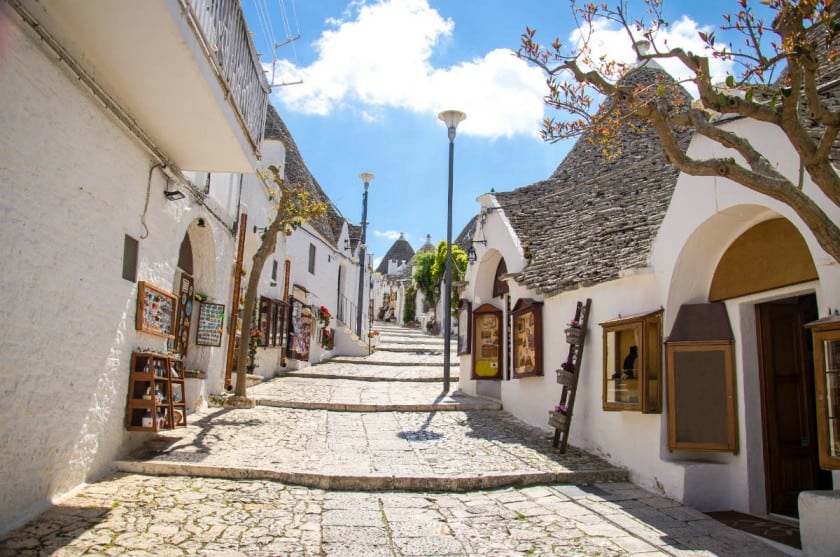 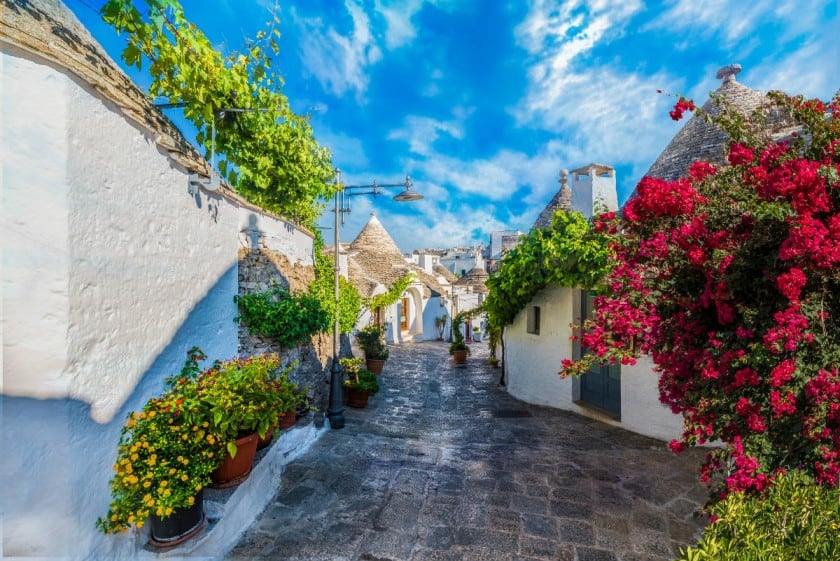 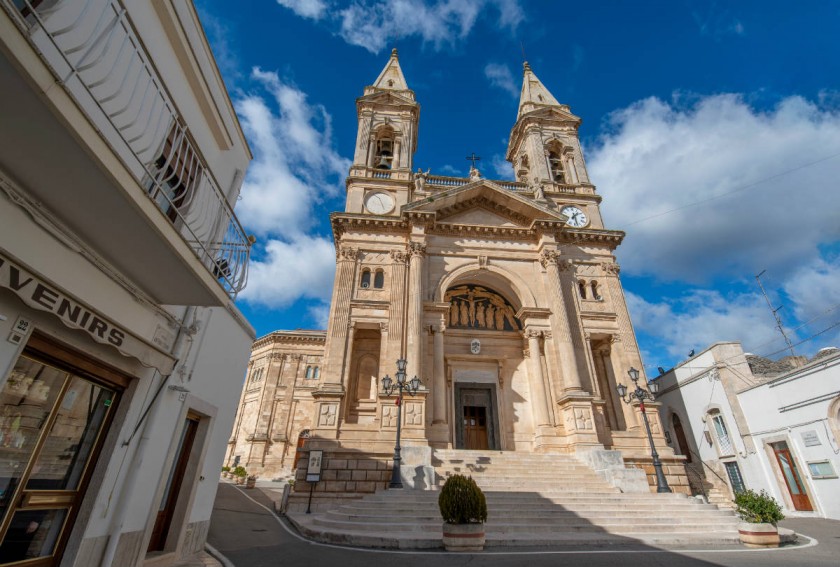 Sanctuary of the Saints Medici Cosma and Damiano
Mitzo/shutterstock.com 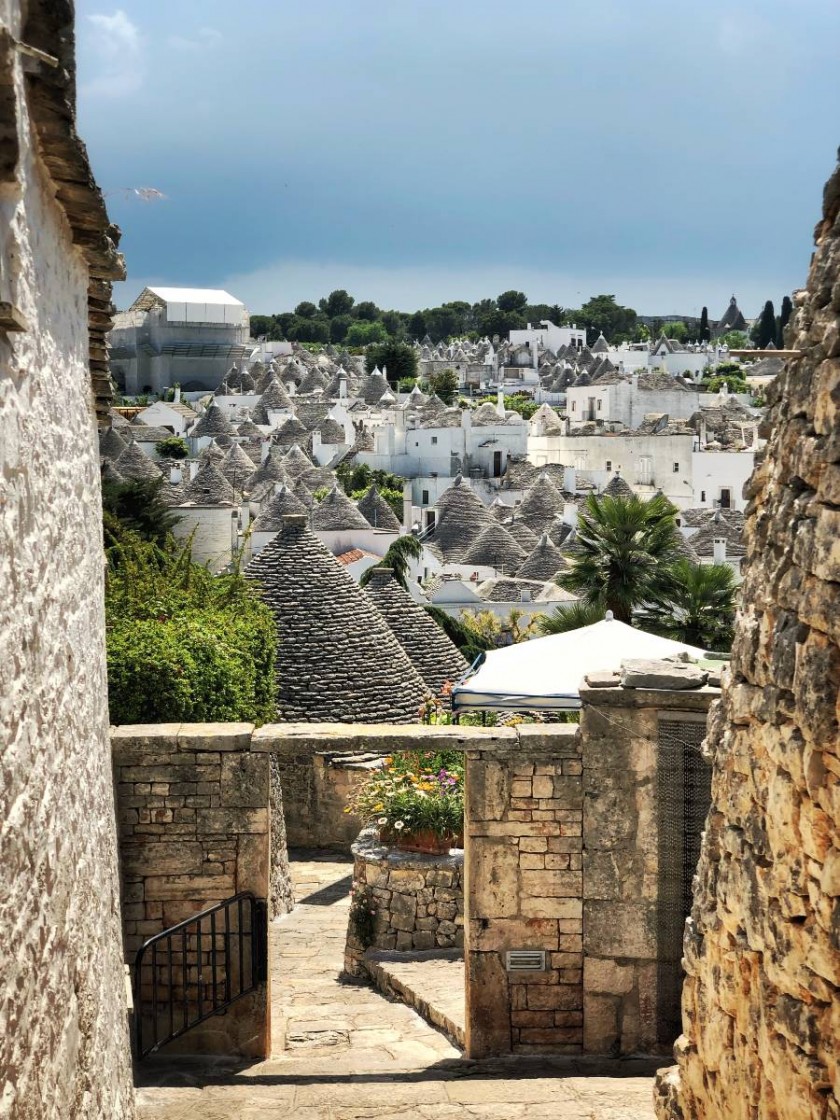 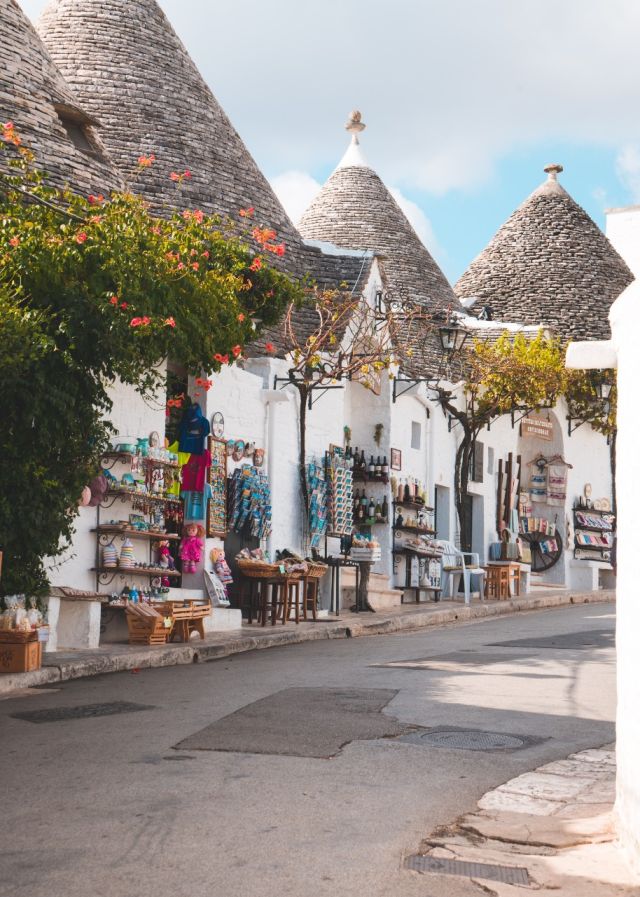 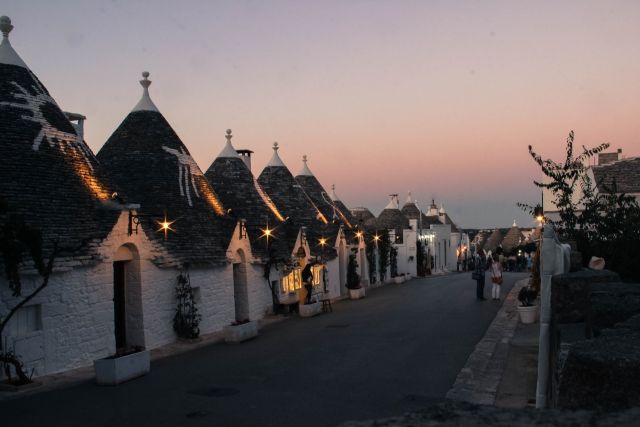 A look at Alberobello 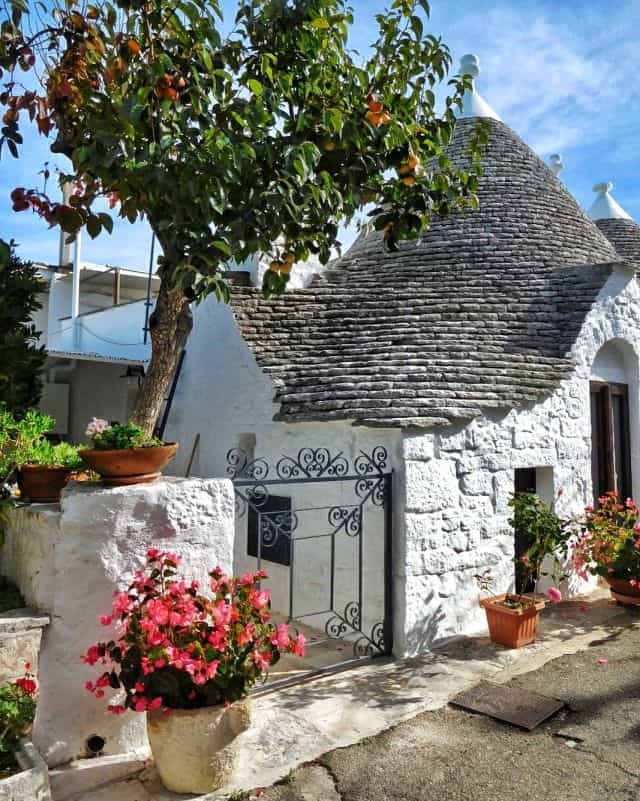 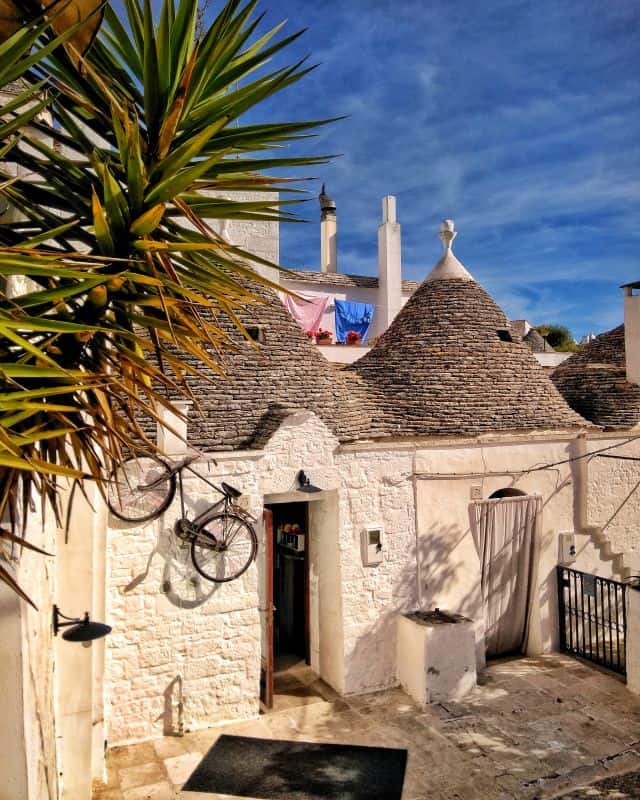 On a Sunday in October in the capital of the Tr...
Massimiliano Ricci - e-borghi Community

Alberobello, known for its characteristic houses called Trulli, is part of the Valle d'Itria and the Murgia dei Trulli.
Bordering Locorotondo, Martina Franca, Putignano, Noci and Castellana Grotte, Alberobello stands on a hill about 420 meters above sea level.The soil is mainly karstic and mixes with red soil/clay, which is well suited to the cultivation of olive trees, almond trees, cherry trees and vines.

Recognized as a World Heritage Site by UNESCO in 1996 and awarded with the Orange Flag by the Italian Touring Club, it is a tangle of winding alleys with more than 1000 trulli.

What is a trullo?
The trulli are small stone white houses without windows, or with a small, simple, square or rectangular window, with a gray cone roof.

Rione Monti, UNESCO World Heritage Site, is the oldest district of the city, together with Rione Aia Piccola, with over a thousand trulli and fifteen streets intersected between them.
Rione Aia Piccola is also a UNESCO World Heritage Site, whose name recalls a large open space that in the past was used for the beating of wheat. Currently this is the only area where there are no commercial activities, which makes it very suggestive.

You can't miss Pezzolla House, a complex of 15 trulli on the east side of the historic Piazza XXVII Maggio, now a museum of the area, and the Trullo Sovrano, the only two-floors trullo, which hosts shows and concerts .

According to some studies, the trulli of Alberobello date back to the mid-fourteenth century; at the time it was common to demolish and rebuild uneven buildings rather than repair them. The dry construction, without mortar, seems to have been imposed on the peasants in the fifteenth century by the Counts of Conversano, to escape an order of the Kingdom of Naples which imposed tributes to every new urban settlement. These buildings were therefore precarious buildings, easy to demolish and not taxable. Actually the trulli are far from being precarious, since their internal structure, although lacking support and connection elements, has an extraordinary static capacity.

The cuisine of Alberobello is genuine and is simple both in the preparation and in its ingredients. The dishes prepared are the expression of the culinary tradition of medieval farmers: short cooking, use of fresh vegetables, oil, spontaneous vegetables and legumes. A cuisine that could be defined as "solar", in which the dominant element is the tomato, fresh or "hung", i.e. that is harvested in summer and kept cool for the winter.
Even the traditional meatballs of Alberobello are never made with meat but with eggs, bread and cheese. You can taste them fried or with fresh tomato sauce and basil. Pasta is one of the key elements, simple both in form and realization and every type has its seasoning. Sauces with fresh tomatoes and basil are cooked very quickly, as are all preparations that require immediate flavour on pasta.
For the ragù the use of white meats and ponies is preferred and with this one the brasciole are prepared: slices wrapped and stuffed with pecorino, garlic or onion and parsley. For these more demanding sauces, the homemade sauce is used - as per tradition - during summer. The puree of white beans is a poor but nutritious dish of the Alberobello cuisine. It is prepared in a large clay bowl with a suitable wooden spoon, accompanied by boiled wild chicory, orobanca or "tops of vines" in salad. Alberobello cuisine, due to its proximity to the sea, is also characterized by recipes based on fish, shellfish and mussels.

Contrada San Marco, 95, Locorotondo (Bari)
7.15 Kilometers from Alberobello
The Church of Our Lady of Sorrows
The Church was born near the town walls that once surrounded the whole ancient village of Locorot...

Piazza Rodio Frà G. A., 7, Locorotondo (Bari)
8.50 Kilometers from Alberobello
The Church of Our Lady of the Greek
Is the oldest church in the village of Locorotondo.

Via Cavour, 183, Locorotondo (Bari)
8.53 Kilometers from Alberobello
The Church of Sant'Anna of Renna
At the base of the hill on which rises the village of Locorotondo, overlooking the road for Marti...

Via Martina Franca, 124, Locorotondo (Bari)
8.57 Kilometers from Alberobello
The Church of Our Lady of the Greek
Is the oldest church in the village of Locorotondo.

Via Santa Chiara, 3, Casamassima (Bari)
32.71 Kilometers from Alberobello
The Church of Sant'Anna of Renna
At the base of the hill on which rises the village of Locorotondo, overlooking the road for Marti...

Via Martina Franca, 124, Locorotondo (Bari)
8.57 Kilometers from Alberobello
Pasciuddo Cave
The Pasciuddo Cave is located about 3 km from the village, in the Murgia, almost half way between...

Via Parco del Lauro, 119, Polignano a Mare (Bari)
23.35 Kilometers from Alberobello
The Badia di San Lorenzo
The Badia of the village of Casamassima, in Apulia, which is believed to date back to the X centu...

Find where to sleep in Alberobello

Trulli Donna Isabella B&B
In the frame of the beautiful Itria Valley, in Locorotondo you can stay at the welcoming B&B Trul...

Via dei Trullari, 11, Locorotondo (Bari)
7.28 Kilometers from Alberobello
Masseria Poesia
Situated in a commanding position with a 360-degree view of the Itria Valley, Masseria Poesia off...

Contrada Cervarolo, Ostuni (Brindisi)
23.92 Kilometers from Alberobello
B&B Amoredimare
This tourist homes are situated in the suggestive old town centre and let the guest overlook the ...

Via San Vito, 149 - 70044, Polignano a Mare (Bari)
24.51 Kilometers from Alberobello
B&B Amoredimare
This tourist homes are situated in the suggestive old town centre and let the guest overlook the ...

Via San Vito, 149 - 70044, Polignano a Mare (Bari)
24.51 Kilometers from Alberobello
= distances as the crow flies
La Locanda del Ristoro
Starters, orecchiette and meat dishes stand out between all the courses.

Via Brindisi 39/41, Cisternino (Brindisi)
20.22 Kilometers from Alberobello
Trattoria-Pizzeria Il Cuccundeo
Open at lunch and dinner, this trattoria offers traditional dishes of Apulia with a touch of orig...

P.zza Aldo Moro, 14-70044, Polignano a Mare (Bari)
23.45 Kilometers from Alberobello
Trattoria-Pizzeria Il Cuccundeo
Open at lunch and dinner, this trattoria offers traditional dishes of Apulia with a touch of orig...

Alberobello is present in issue 4 of our digital magazine e-borghi travel.
Read it now! 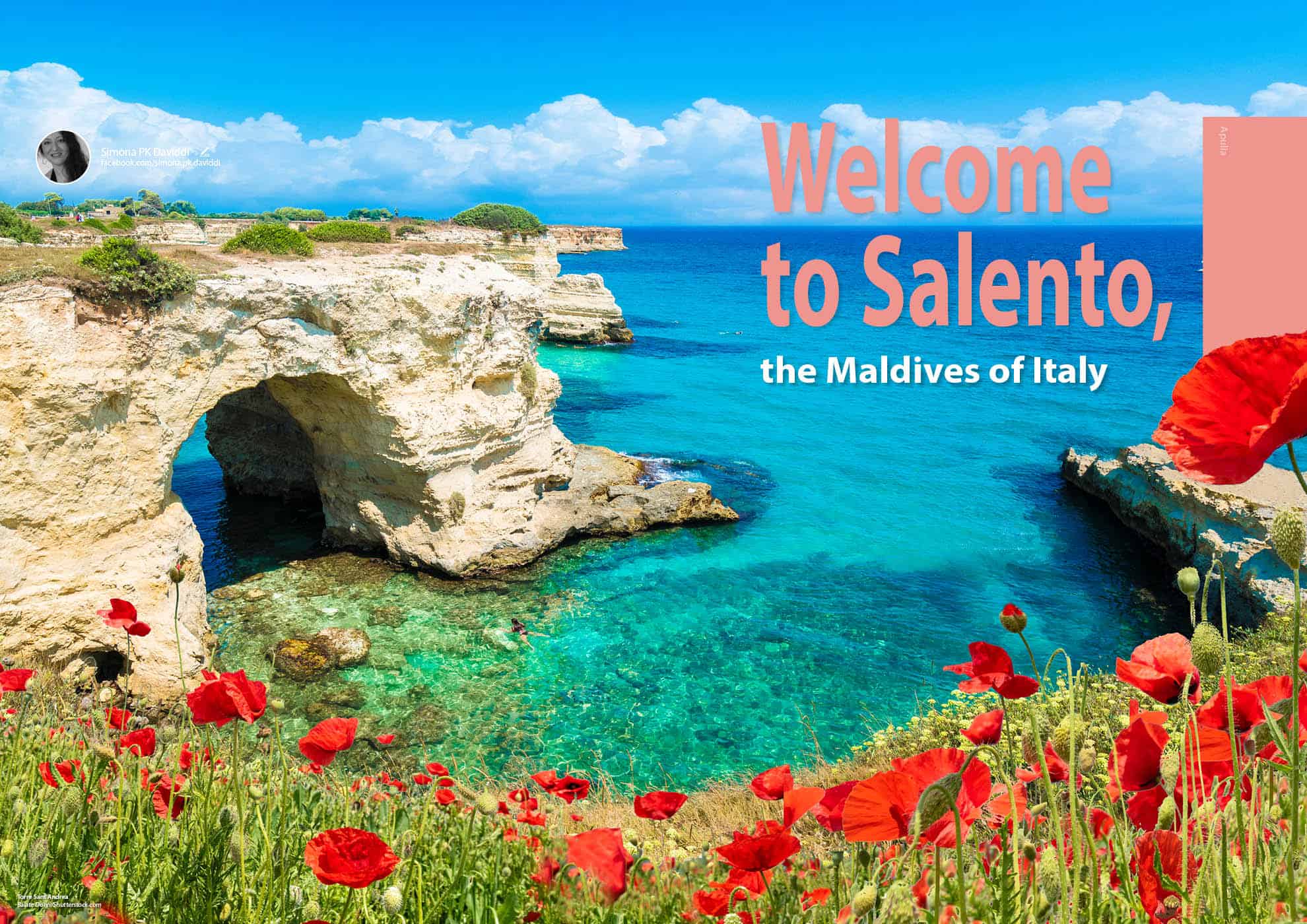 Welcome to Salento, the Maldives of Italy

Re-enactment of the ousting of the Count of Conversano

Our news about Alberobello

The 10 most beautiful alleys of the Italian villages
Italy is a land full of wonders and places to discover. Tourists from all over the world come to visit the villages of the country to discover characteristic streets and alleys that offer unique views of the world, characterized by small and narrow picturesque cobbled and stone streets that often climb to the heights and panoramic places overlooking breathtaking views. Getting lost in the alleys and streets of Italian villages is one of the be...
Continue
A romantic journey through the villages of Puglia
Puglia is a region full of magical villages, an ideal destination where you can decide to spend a romantic weekend. There are many destinations that you can recommend and considering that each place is different, peculiarities and curiosity will guide you in the choice that best suits your taste. Each village is rich in historical, artistic and cultural heritage all to be discovered. Let's start with the first one. Polignano a Mare in the p...
Continue
The Killer Dish of Apulian Cuisine: Spaghetti all'Assassina
Photo by angolodidafneilgusto.com Apulia is considered one of the most popular regions in which to spend a holiday, not only for its scenic beauty and historical-artistic heritage but also for its food and wine. There is no dish in Bari and its province that does not delight the palate of lucky patrons with focaccia, braciole, the famous orecchiette alle cime di rape, mussels and the very tasty Spaghetti all'Assassina. Curiosity
Continue
Recipe: Cisternino's Bomblets
Apulian Bomblets are small rolls of pork, typical of the Valle d'Itria, in particular of Cisternino, although many claim that the first Bomblets were prepared in Fasano, in the province of Brindisi, and then spread to Cisternino (the town which most of all has made it a gastronomic icon), Alberobello, Locorotondo and Martina Franca, as well as throughout the Taranto area. The Bomblets were so called by their creator, a butcher of Fasa...
Continue
The legendary Squinter of Apulia, founder of the village of Alberobello
Count Giangirolamo II Acquaviva d’Aragona was really a particular character. Count of Conversano from 1626, feared by his subjects for his reputation as an evil and vengeful man, he was also a practicing clergyman devoted to the holy brothers Martiri and Medici Cosma and Damiano, he was an excellent patron and was responsible for improving the conditions of life of its peasants. A very particular man who, even if he was a firm supporter of the Spanish crown (which dominated at the time) did not lose an opportunity to circumvent it w...
Continue
Autumn in the villages: the 10 events not to be missed
Summer is over but for some, the holidays are about to begin. How? With our list of 10 autumn 2022 events in the boroughs, they won't take more than a weekend. 1. "Saturday of the Artist" in Valeggio sul Mincio Saturday 22 October artists and nature lovers are invited to Valeggio sul Mincio, near Verona. To participate in "Sabato d'Artista", just send, by the previous Monday, an email to: [email protected], with an example of your creations and the date chosen for the exhibit...
Continue
Italia Incoming: the success of workshops and educational tours
After a series of successes, the last educational tour organised by Italia Incoming è was the crowning achievement of an exciting year. Italia Incoming, under the patronage of FITAC, the Italian Federation of Associative and Cooperative Tourism, organises weekly educational tours and workshops for Cral and association presidents, journalists and tourism bloggers. The latest Eductour was therefore extraordinary. The last Eductour took place in Apulia thanks to the “Rete A Sud Est”, a group of companies that created an as...
Continue