What to see in Pietrapertosa, Potenza, Basilicata 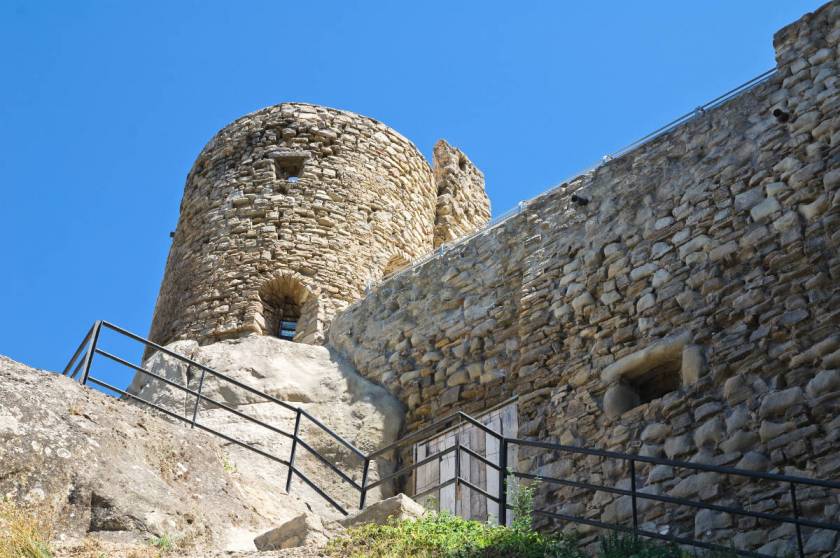 The oldest attestations relating to the presence of fortified structures to Pietrapertosa date back to the beginning of the first decade of the century XI and come from a document with which in 1001 or 1002 the protospatario Tarchaneiotes Gregory, Catapano d'Italia, restate the boundaries between Acerenza Ticarico and after having cast out from Pietrapertosa a group of armed format by the Saracens and Christians converted to Islam and headed by Loukas, probably a Greek-Byzantine, become a Muslim who settled in the country a few years before. The fortification highlights, hitherto, structures dating back to between the centuries XII-XIII and the XVIII. The suffeudo of Pietrapertosa, and therefore also the castle, is attested in the Catalogus Baronum (second half of the XII century), in the orders of the angevin Curia of the year 1278, relating to the maintenance of the castles owned. Around the same date there was news of the assignment of the feud and then of the castle to Guglielmo de Tournespée, character who has followed Carlo d' Angiò in the conquest of the Kingdom of Naples. In more recent times the feud and castle were possessed by some important families of the kingdom which the Carafa, the open, the Suardo, the Jubero and finally the Sifola. In time the structure has evolved from the condition of a small fortress toward the baronial residence. The progressive abandonment of the building in the 19th century are the cause of collapse and even partial demolition work carried out in the first postwar period. The restoration and the witness of the Middle Ages archaeological excavations have allowed the identification of three different stages of enlargement of the castle, in the direction of the access portal, bear witness to the presence of the remains of many-sided. In the moment of maximum expansion that part of the entrance was composed of three floors concluded by a system of machicolation used for the defense of the input. The walls toward the country were tucked up some buildings constructed from a basement and a plane out of the ground, subsequently collapsed. Downstream of the city walls, a large terrace in which they complete archaeological excavations, constituted a space at the service of the castle but with still functions not investigated and probably a second access to the country. In this area of the castle there is a necropolis dating back to the early middle ages, formed by burials to arcosolium with niches and the space of deposition dug directly in the rock of some spires of sandstone, anciently reachable with removable scales. Another spire, instead, hosts a point of sighting isolated by fortified walls and dug into the rock. Finally a staircase, still existing, directly excavated in the rock, led on the top of the rocky peak on which stands the castle, that allowed the control "view" of a large territory. In the castle there are two tanks for the collection of rainwater. In the most profound were preserved, buried in the mire, the remains of a medieval throne in wood. In the vicinity of the entrance portal is coming to light the original staircase entrance to piazzale upper and a series of masonry leaned one to the other, that testify to the three stages of enlargement of the city walls. To the Medieval phase of the castle belong a semirupestre compartment, used in the service of healing, a great hypogeal space divided into two environments from a stone arch, in good part preserved on the spot and a small environment dug into the rock that documents the presence of a stallaggio for animals. The fortified walls preserves testimonies of constructive technique medieval characterised by the use of "diatoni" in wood or small wooden beams driven transversely in the walls according to a precise geometric mesh, to improve the efficiency of the masonry. The Castle today The Castle is now accessible thanks to a restoration that has brought to light the medieval testimonies still present, accessible with modern facilities that denounce the insertion of new in the old, are removable and protect from damage caused by the passage of visitors, the parts of the castle carved in a rock that is particularly crumbly.

Via Regina Margherita, 2 - 85030, San Paolo Albanese (Potenza)
4749.56 Kilometers from
Il Borgo Ospitale Albergo Diffuso
It represents a real jewel immersed in a place of unparalleled beauty and is located directly in ...

Via Libertà, 11, San Paolo Albanese (Potenza)
4749.35 Kilometers from
Borgo Manca Suite
An albergo diffuso located in the oldest part of Sasso di Castalda and part of the "DL Dimore Luc...

Via Casale 15 - 85050, Sasso di Castalda (Potenza)
4773.00 Kilometers from
B&B Il Sasso
A very convenient structure for any destination, without having to use the car, a stone's throw f...

Via San Nicola, 9, Sasso di Castalda (Potenza)
4772.87 Kilometers from
CasArancio
A vacation home near the Museum of Arbëreshe Culture in San Paolo Albanese

Via Caprera, 6 - 85030, San Paolo Albanese (Potenza)
4749.66 Kilometers from
= distances as the crow flies
Time Bridge Pub
A place with a warm atmosphere and a destination not to be missed during a stop in the village of...

c.da Serra, 16, Satriano di Lucania (Potenza)
4777.36 Kilometers from
= distances as the crow flies
Bridge to the Moon
The Ponte alla Luna bridge in Sasso di Castalda is a spectacular Tibetan bridge with the longest ...

The Feast of Mascio

On the traces of the Arabs