The variety of typical Italian dishes extends not only geographically but also throughout all seasons of the year. Let's discover the typical autumn dishes 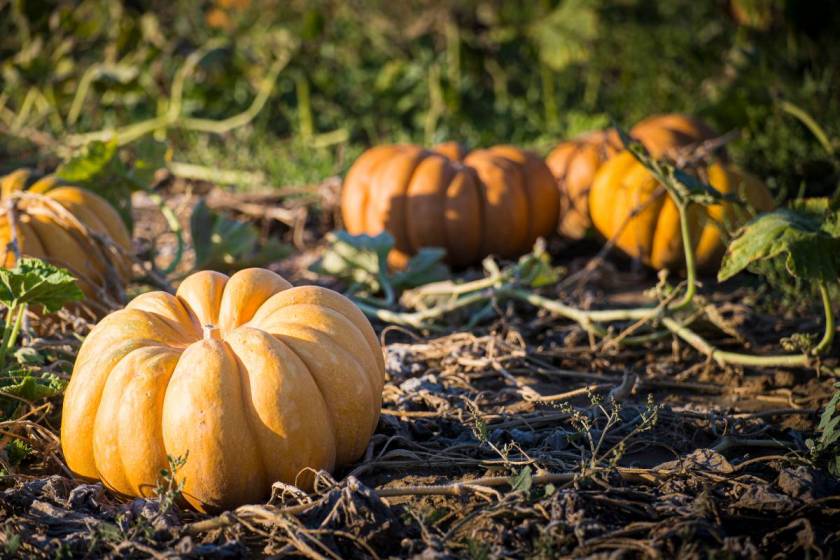 Italy has always given us exceptional traditional dishes from North to South and the variety of typical dishes extends not only geographically but also throughout all seasons of the year. In fact, there are dishes that were and still are enjoyed during a certain period of the year.
These include autumn dishes. Let's see which to taste and where.

Tagliolini with black truffle from Norcia
This dish has its origins in Umbria and precisely in the municipalities of Spoleto and Norcia, which are the home of the black truffle. Today, however, this delicious dish is also present on the tables of the best restaurants in Italy. The recipe is prepared in a very simple way: the tagliolini are chosen, which are a thin fresh pasta prepared with a lot of egg, these are sautéed together with oil and garlic in a sauté and mixed with the black truffle. 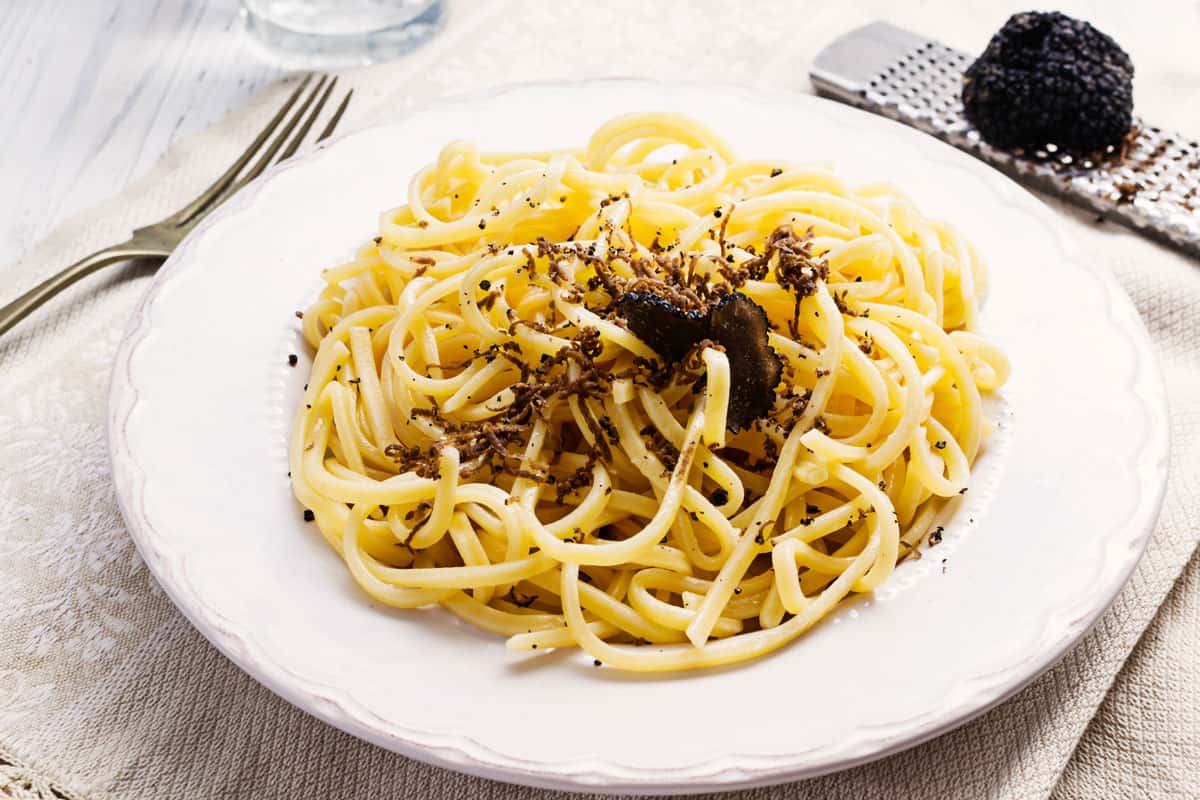 Orecchiette with turnip tops of Locorotondo
Orecchiette with turnip tops, of course, cannot be associated to a single village or village, as they are part of the culinary tradition of Apulia. Their origins, however, date back to the province of Bari and in Locorotondo they can be enjoyed in an excellent way. This dish is now widespread throughout Italy, and not only that, but the orecchiette, in Apulia, are still prepared according to tradition, that is by hand, using the thumb, and as a tool only a knife. 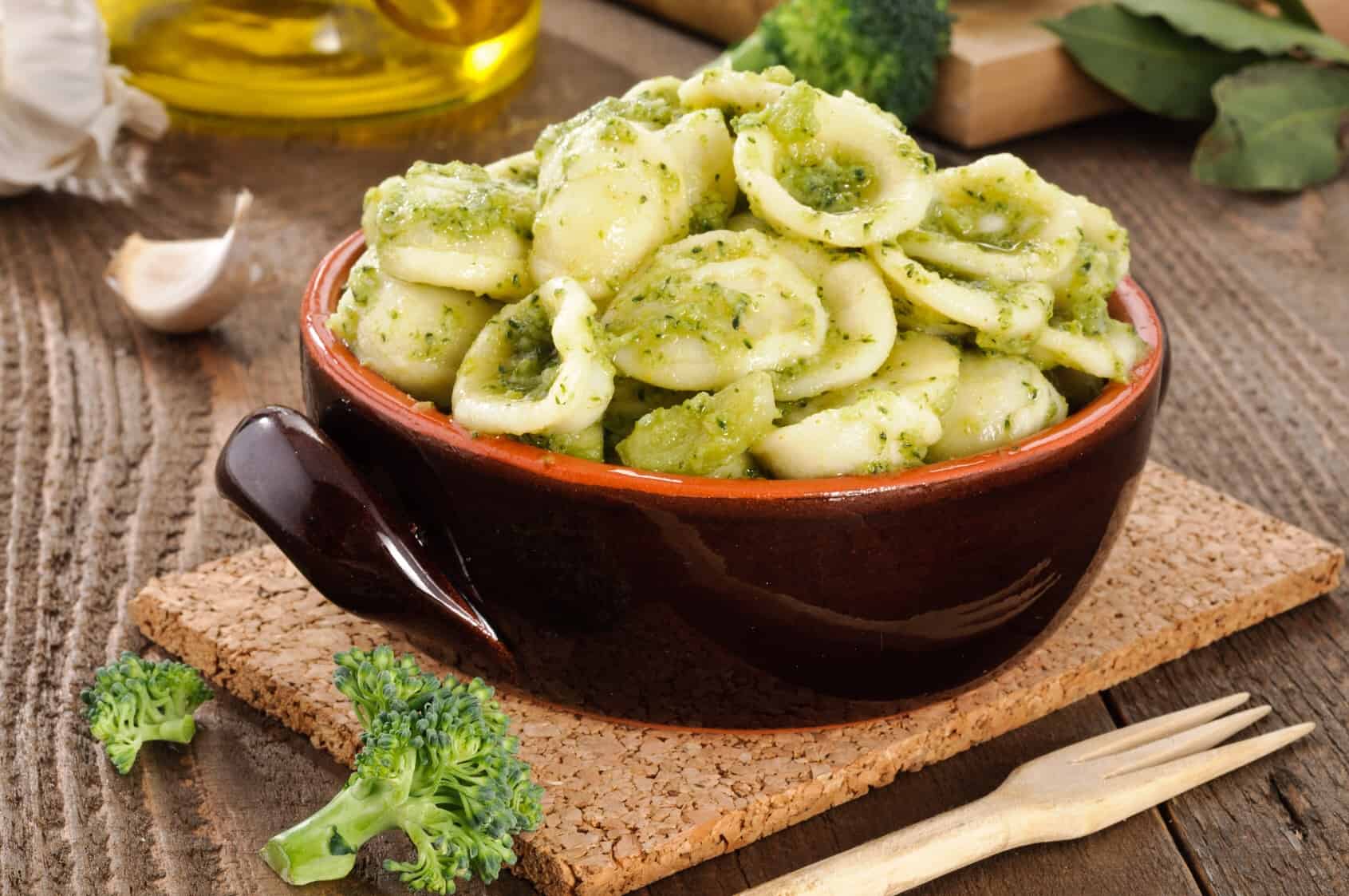 Castellanese or Sa Cassola di Castelsardo soup
Castelsardo is a very charming village in the north of Sardinia, in Anglona, very fascinating and rich in history, the whole village was built on trachyte rocks and was surrounded by a mighty fortification with many watchtowers.
Its typical autumn dishes could only be based on fish and the queen of the kitchen could only be the lobster. Among the typical dishes par excellence of the village, in autumn is certainly the Zuppa alla Castellanese, also known as Sa Cassola di Castelsardo, composed of different types of fish, including octopus, cuttlefish, sea bream, redfish, mullet, crabs, eel, shrimps, mussels and clams. 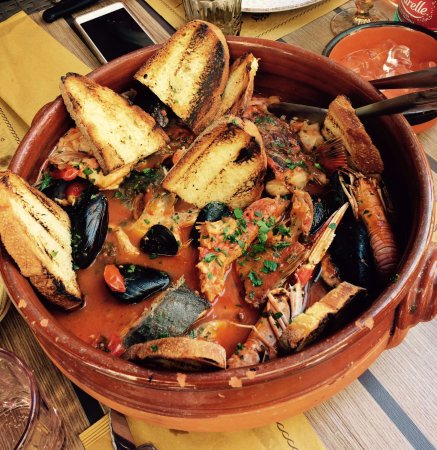 Tortelli of pumpkin from Sabbioneta
In truth they are not a real typical dish of Sabbioneta alone, because it is prepared in an excellent way throughout the Mantua area, in the Cremona and Brescia area, but we wanted to emphasize this wonderful Renaissance village in order to present this typical autumn dish in the best way. Pumpkin tortelli are prepared with ravioli, or half-moons, rectangular egg pasta filled with Mantuan pumpkin, macaroons, Cremona mustard, Parmesan cheese and nutmeg. As per tradition, tortelli are prepared for Christmas Eve and served with the addition of good butter and Parmesan cheese. 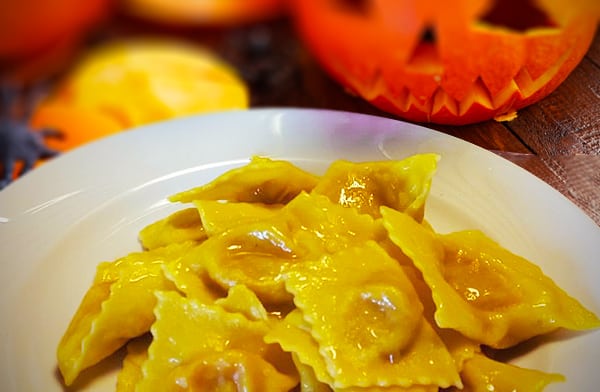 Tortellini love knot by Borghetto sul Mincio
Tortellini knot of love are small tortellini with thin pasta filled with braised meat. Their name is linked to the legend of two lovers who took refuge at the bottom of the Mincio River to escape their enemies, leaving a knotted handkerchief on the river bank as a symbol of their love. This dish is protagonist during the third Tuesday of June in the feast of the love knot, but it is also tasted in September during the event "Tortellini e dintorni", opening the autumn season of taste and tradition. 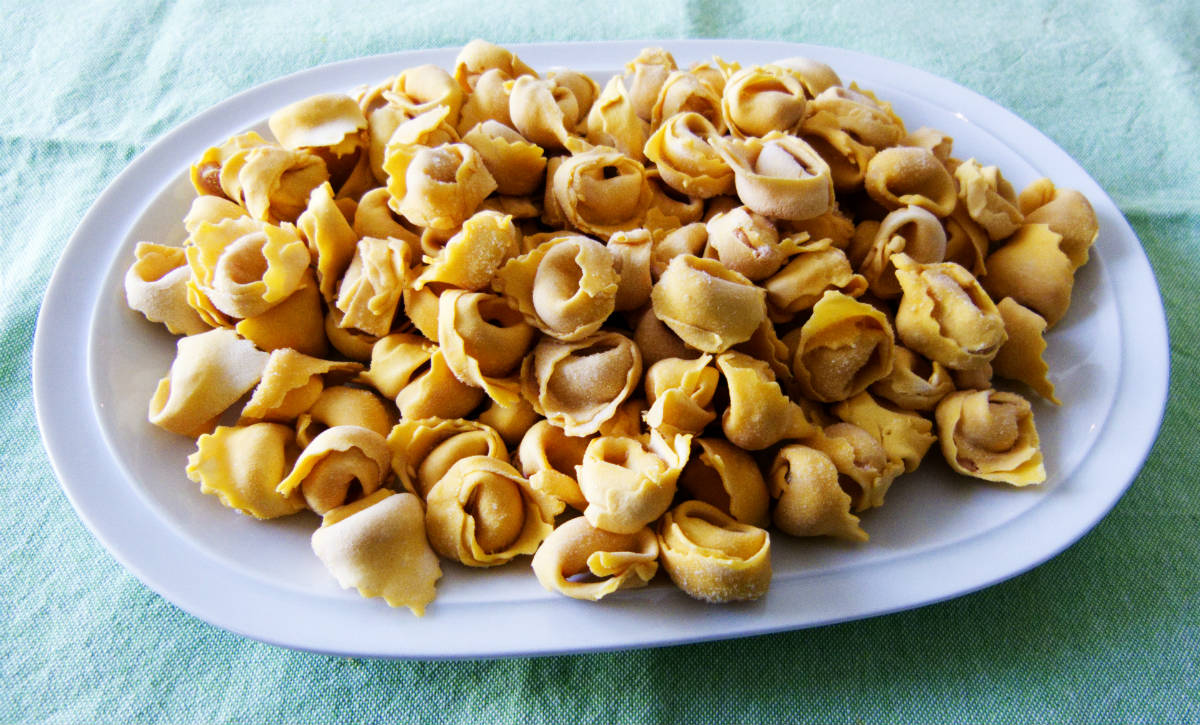 Cuccià of Castelmezzano
This is the classic recipe that has been handed down over the years among the inhabitants of this beautiful village in the Lucanian Dolomites. It is a dish characterized by a legume soup that according to tradition must be tasted on December 13th, Saint Lucia's day. The recipe consists of four ingredients, chickling peas, wheat, broad beans and chickpeas. And every year, just for Santa Lucia, a festival is dedicated to this dish.

Potato gnocchi with ciuìga of San Lorenzo in Banale
It is the classic poor dish, prepared in lean times, with the less noble parts of the pig together with turnip and anchovies. The ciuìga del Banale, today instead prepared with the best cuts of pork, is a slow food garrison and can be tasted during the first weekend of November on the occasion of the dedicated festival. 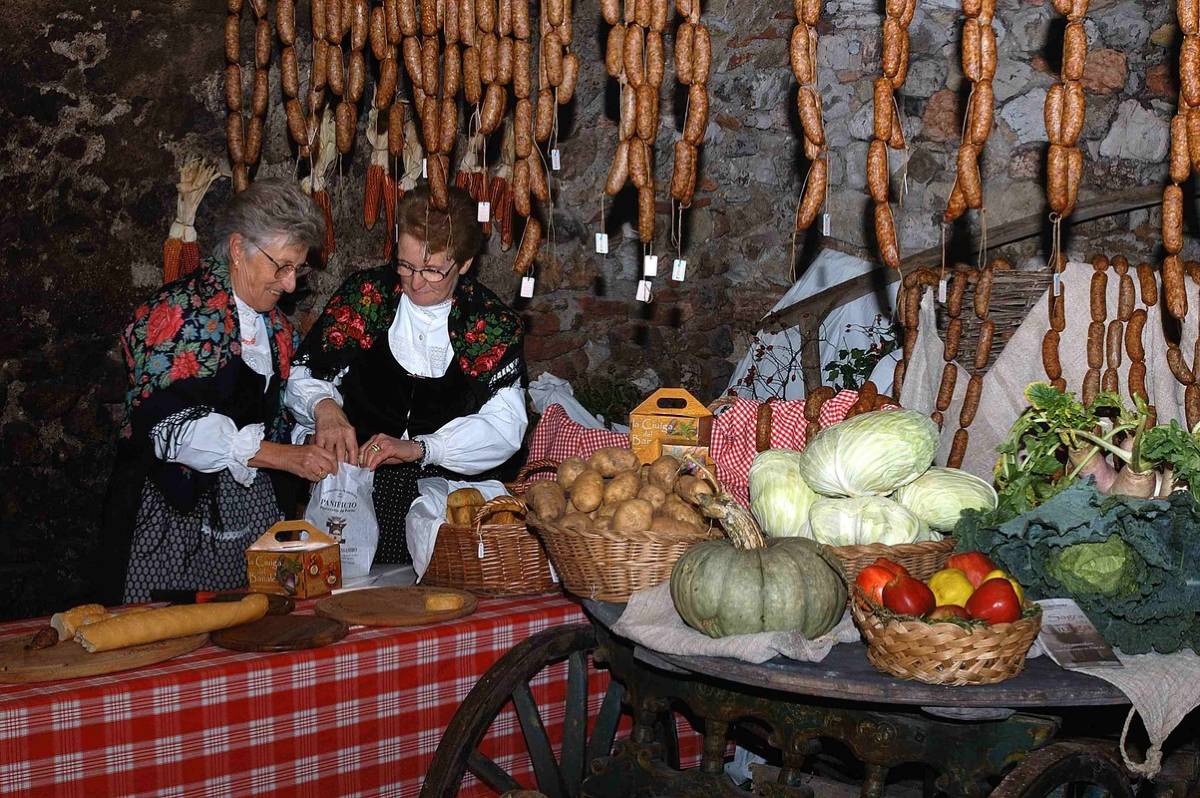 Corso Vittorio Emanuele II°, 17, Castelmezzano
Trulli Donna Isabella B&B
In the frame of the beautiful Itria Valley, in Locorotondo you can stay at the welcoming B&B Trul...

Via dei Trullari, 11, Locorotondo
Bajaloglia Resort
An oasis of wellbeing and relaxation, where the scent of the Mediterranean vegetation will inebri... 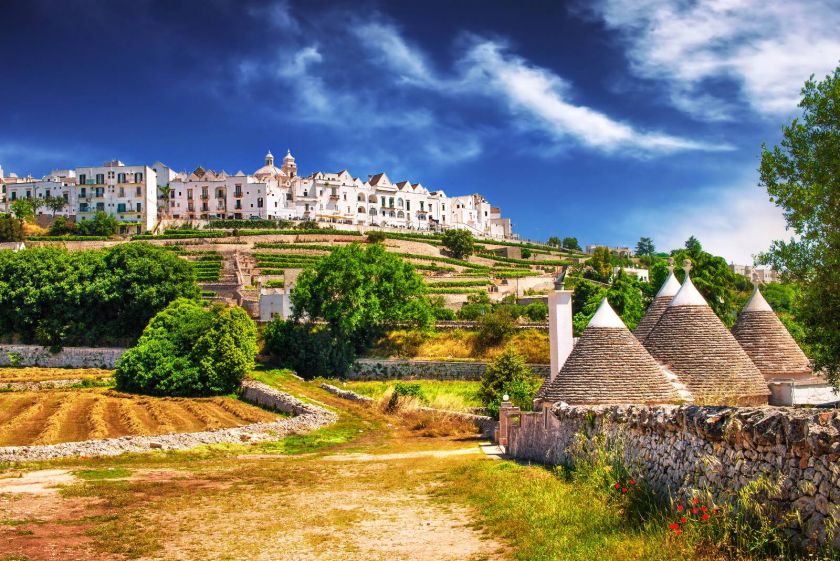 What to see in Locorotondo