Share
The little town, enchanted, rises boldly perched on the top of a giant promontory which, emerging from the sea, rises soaring into the sky. It is the pearl, of rare beauty set in the center of that gulf which takes the name of Asinara, first happily called "Island of Hercules" and then "La Sinuara". The village embraces gently undulating hills, white sandy shores, but above all the sea, colored with the most loaded shades of blue and green. 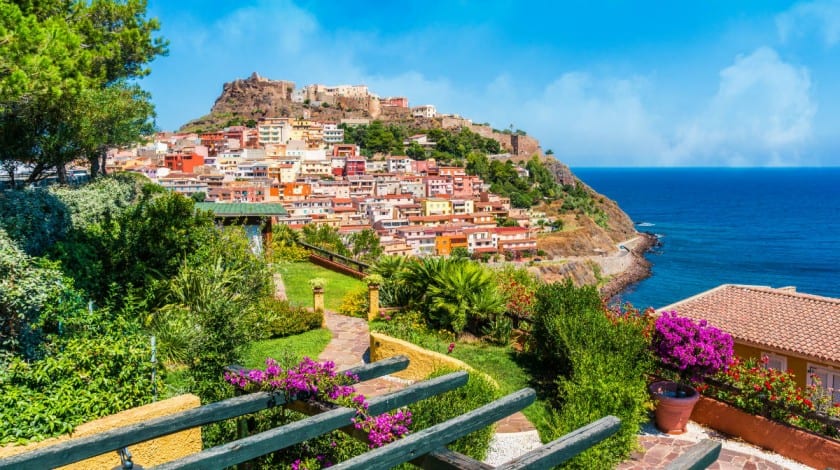 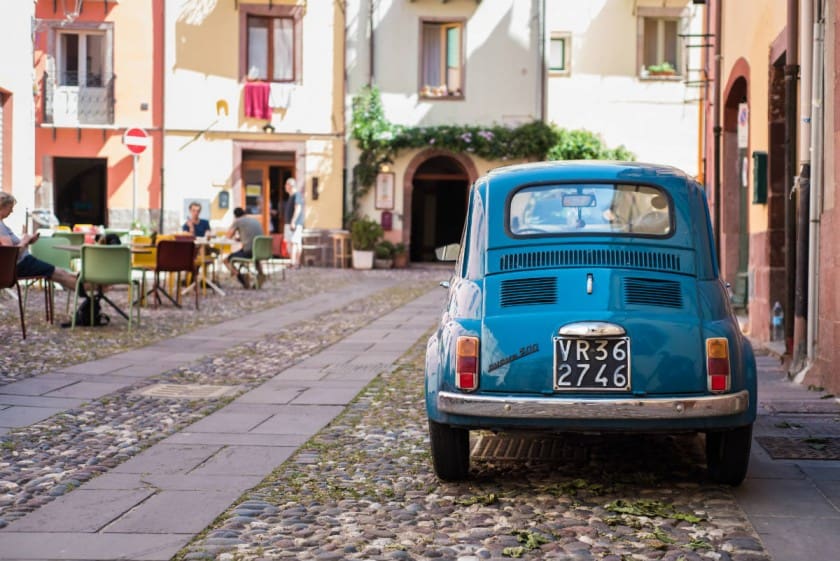 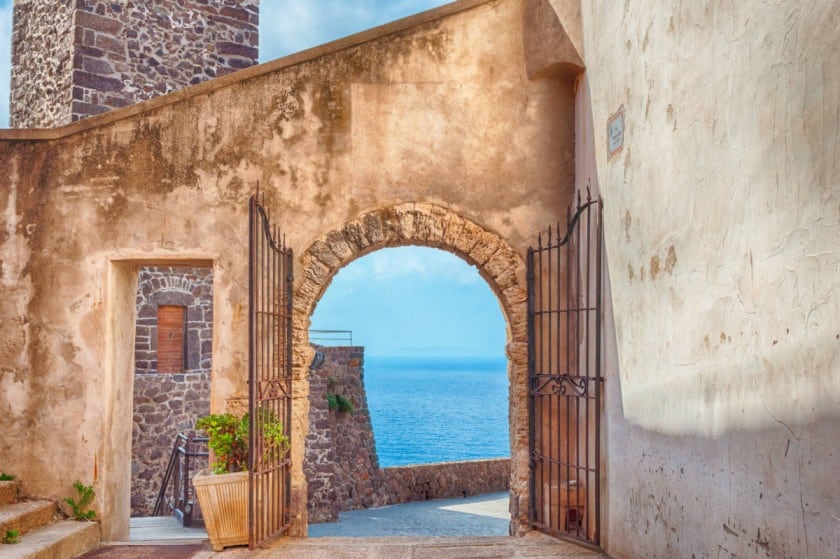 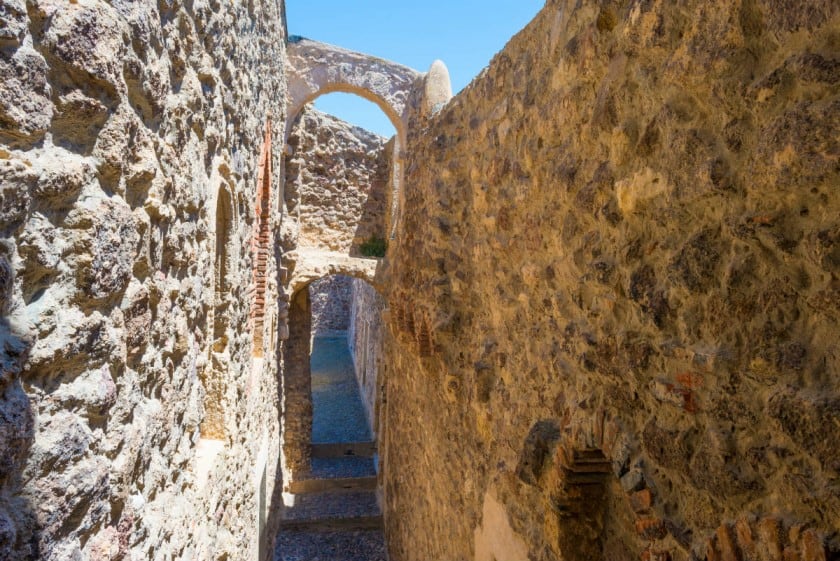 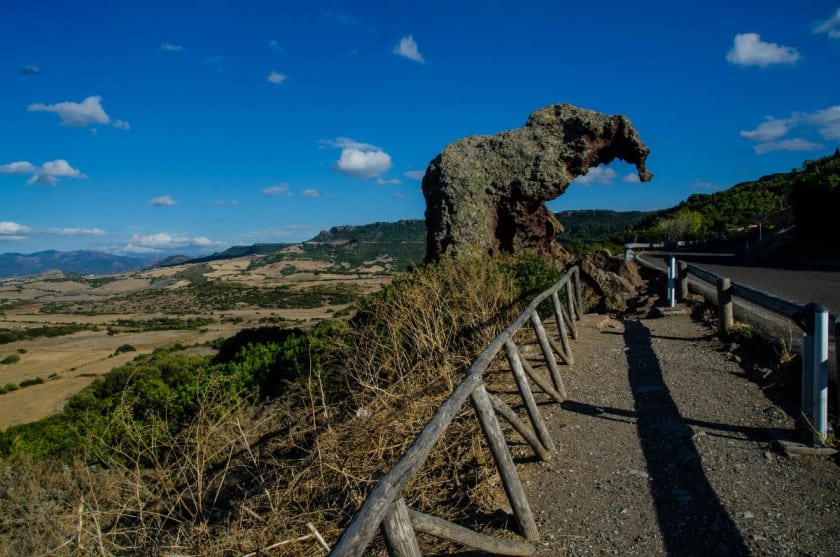 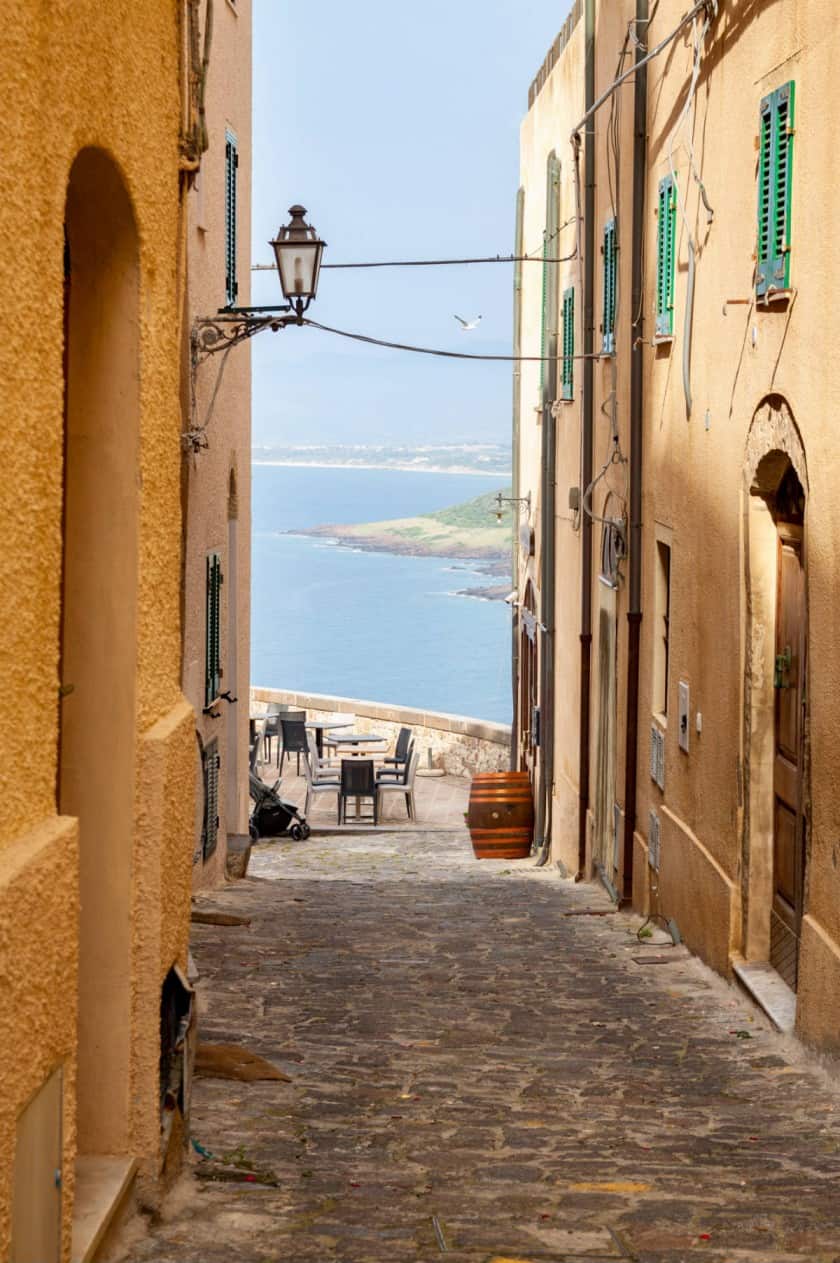 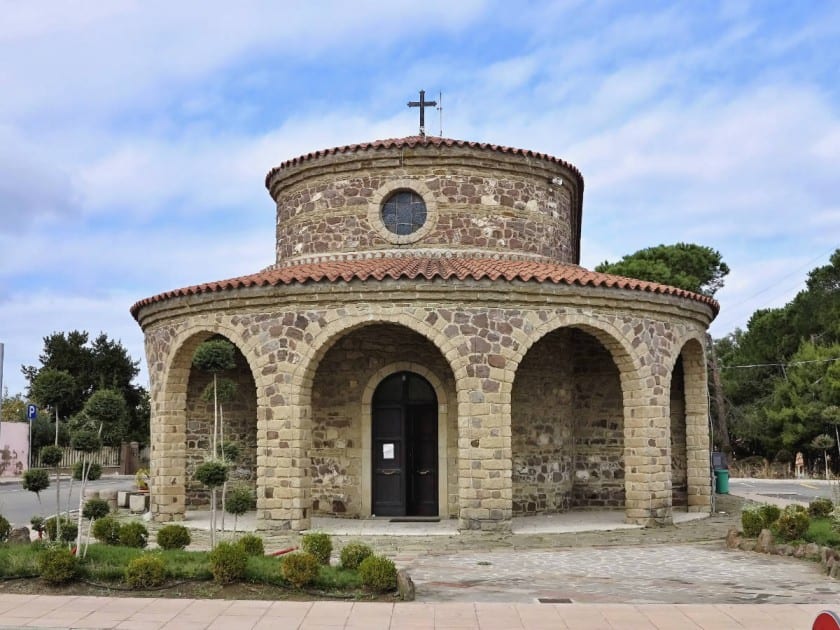 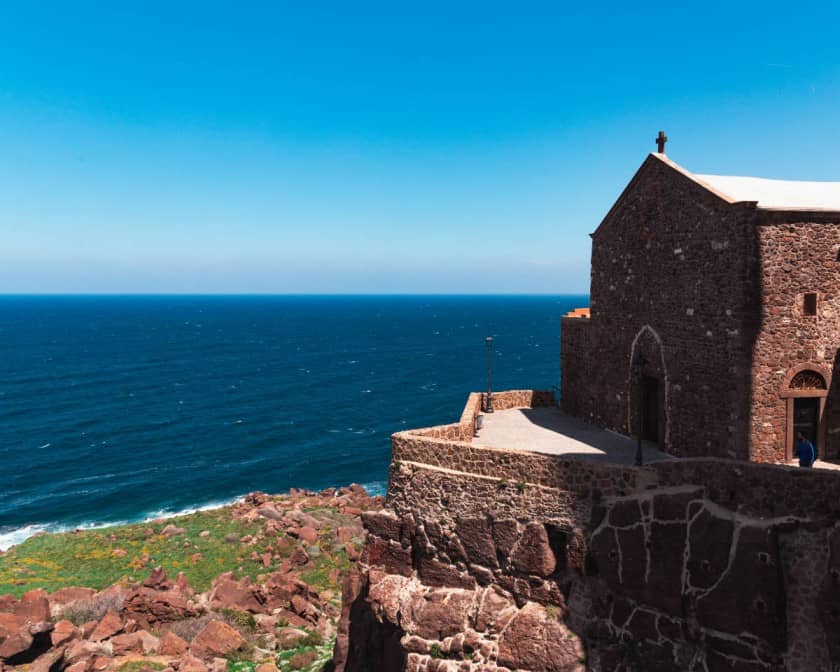 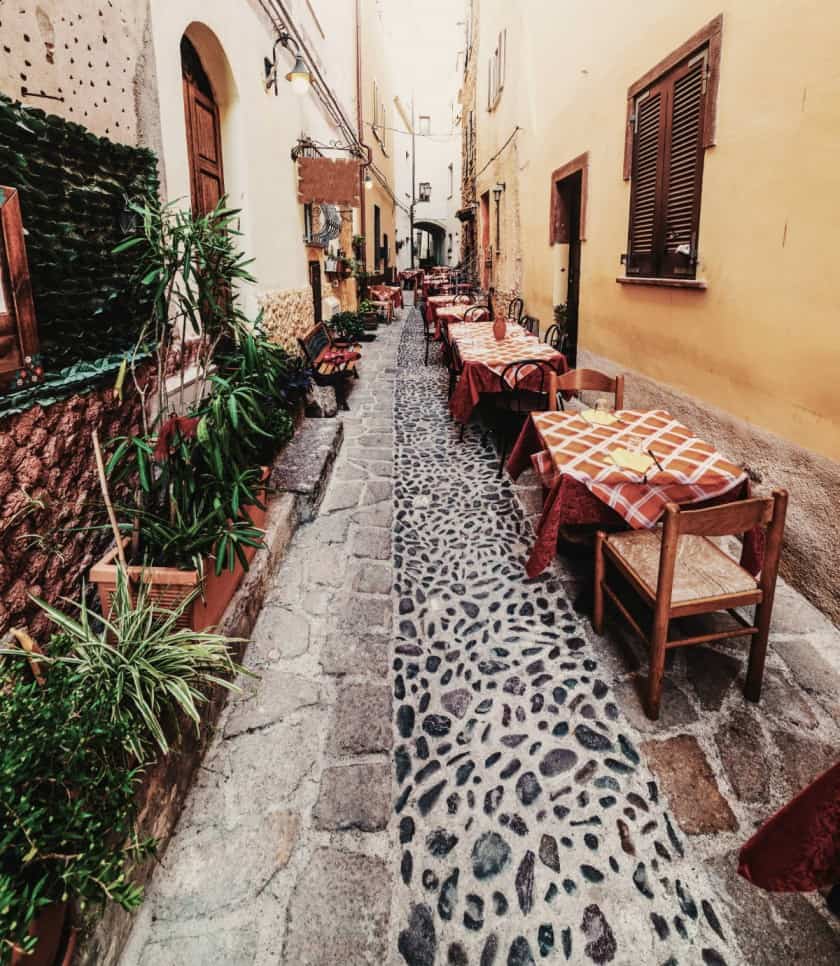 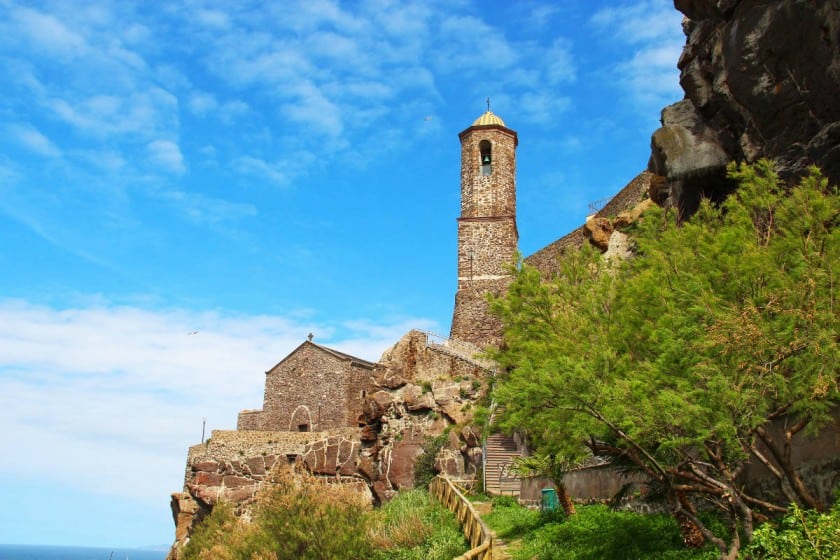 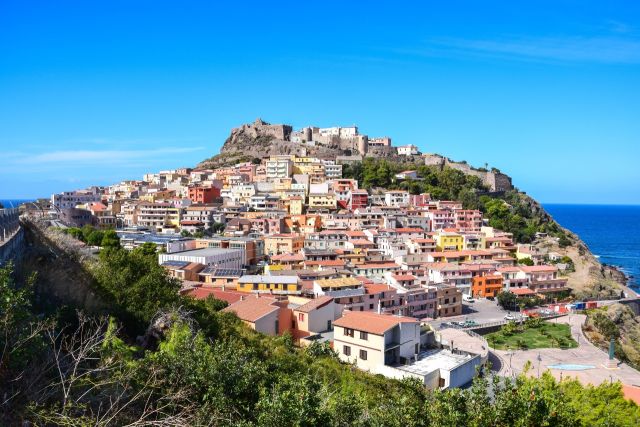 Located in the centre of the Gulf of Asinara, in the historical region of Anglona in the north of Sardinia, it is not difficult to imagine why Castelsardo has a very ancient human history.

From here, with a single glance you can embrace all the gulf coasts, even the ones of Corsica, right in front of us. An endless series of small inlets, natural docks, to then arrive to this promontory overlooking the sea, where after centuries of history, the village of Castelsardo rises, perfectly preserved.
Founded in 1270 by the Doria family of Genoa with the name of Castelgenovese, it was then conquered by the Aragonese and renamed Castellaragonese around 1520. The current name Castelsardo dates back to 1767, when it passed definitively to the Kingdom of Savoia. The entire village is built on a cliff and is entirely surrounded by fortified walls (even 17), and it is constituted by ancient centuries-old houses, streets and alleys that cut the whole village, following the perimeter of the promontory on which is lying.

From the Doria Castle, that from the top overhangs the inhabited area, the eye is fascinated by the bell tower of the Cathedral of Sant'Antonio Abate, placed on the edge of a rock, which in this way seems to majesticly lift up from the underlying empty space. And then the eyes follow the ridge of the fortified walls at the sea and the sentinel's path, that ends with the coastal tower of Frigiano. But the excellence of this place is not limited to all of this.

Castelsardo, besides having kept and preserved its historical treasures and its history for centuries tied to its position on the gulf, it alsp owes to the sea some really tasty traditions. Typical of Castelsardo are in fact all the fish dishes, in particular the lobsters alla castellanese (with a sauce made with lobster eggs), but also American lobsters, European spider crabs, mullets, picarels, John Dories, sea urchins and seafood. Do not miss the opportunity to enjoy some of these delicacies, while appreciating the magnificent view that opens up in front of you, on that wonderful terrace overlooking the Gulf of Asinara which is Castelsardo.

via Convento, 10, Sorso (Sassari)
16.40 Kilometers from Castelsardo
Sulis tower
Also known as Torre dello Sperone, Torre Sulis was built in the first half of the 16th century an...

Via Pretura, Aggius (Sassari)
30.66 Kilometers from Castelsardo
Porta Terra Tower
The Torre di Porta Terra, located in the square of Alghero, has been the main entrance to the cit...

Via Lepanto, 36, Stintino (Sassari)
39.92 Kilometers from Castelsardo
= distances as the crow flies

Bajaloglia Resort
An oasis of wellbeing and relaxation, where the scent of the Mediterranean vegetation will inebri...

Discovering Sardinia with the 100 Towers Walk
Visiting 105 towers scattered across 88 Sardinian municipalities: this is the aim of the 'Cammino delle 100 Torri, in Sardegna', a slow route that takes visitors to some of the most beautiful places on the big blue island in about 60 days. The itinerary crosses 450 kilometres of beaches and endless expanses of sea that are lost in the horizon of spectacular panoramas, sunsets with spectacular colours and pieces of Italian history that show the...
Continue
L'autunno a tavola nei borghi italiani
Italy has always given us exceptional traditional dishes from North to South and the variety of typical dishes extends not only geographically but also throughout all seasons of the year. In fact, there are dishes that were and still are enjoyed during a certain period of the year. These include autumn dishes. Let's see which to taste and where. Tagliolini with black truffle from NorciaThis dish has its origins in Umbria and precisely in the ...
Continue
Itinerary among 5 of the most suggestive villages of northern Sardinia
Our journey begins after a ferry crossing to Olbia where, after visiting the historic center and its wonders, we will be able to leave by car following the SS125 northwards, to Palau, to board a boat bound for our first destination , the island of La Maddalena and its village. The journey, starting mid-morning from the port city, should last about an hour and a half, therefore, upon arrival we can enjoy an excellent fish-based lunch in one of ...
Continue
5 romantic villages for emotions between poetry, dream and reality
Not just Halloween, trick or treat. Our Peninsula is dotted with romantic hamlets in which drunkenness rhymes with tenderness: to spend a day, a weekend or a long bridge in evocative atmospheres. 1. Monte Isola (Lombardy) Lake Iseo: refined, intimate and "vintage", with its pastel colored villas overlooking the water and, around, a crown of parish churches and monasteries. With a primadonna, Monte Isola, which stands out in the m...
Continue
A weekend between the villages of Castelsardo and Aggius
It is from the city of the fountain of the Rosello, an architectural jewel of Sassari, which begins this weekend in the far north of Sardinia. And 'the state road dell'Anglona that takes us from the capital to the first leg of the weekend, Castelsardo. Suggestive center of the coast, on the Gulf of Asinara, preserves, in its most ancient part, the typical medieval structure. The fortress of the Castello dei Doria dominates the inhabited ar...
Continue
Discovering 7 villages in Sardinia choosing the right ferry
Summer is almost upon us and the desire for holidays is increasingly felt. Among the most popular destinations in Italy, Sardinia offers innumerable tourist solutions, among which, of course, the Sardinian villages, which with their traditions, cultures and typicality, are the spearhead of a slow tourism, sought and absolutely surprising. Reaching these little jewels furrowing the seas of the Tyrrhenian coast of our boot represents an experie...
Continue
Recipe: Mirto, sips of well-being from the villages of Sardinia
"One enjoys one drinks as much as one's thirst". Thus wrote the great Italian poet Dante Alighieri (1265-1321) in the 20th canto of Purgatory of his universally known Divine Comedy. In the same period, "spirit" drinks began their unstoppable journey towards popularity. The elixir of Sardinia is the Mirto (myrtle), a liqueur with an alcohol content of 30-35 degrees obtained by cold hydroalcoholic infusion or dark purple berries or leaves: with the first one obtains the red myrtle, with the second the white myrtle is there. Both delicious w...
Continue
The Rock of the Elephant in Castelsardo and its ‘domus da janas’
"Who from Castelsardo runs through the National Way to Sedini, suddenly faces a strange spectacle. A giant elephant, three times as high as the huge prehistoric mammoths, coming out of the jungle and roaming toward the mountain. " (Edoardo Benetti)   In Castelsardo, the village in the province of Sassari, from which it is possible to embrace all the shores of the Gulf of Asinara, there is a rock eroded by time and wind, which dominates th...
Continue
Castelsardo is preparing for Holy Week
Easter is approaching and Castelsardo, one of the most characteristic villages of Sardinia, is preparing for liturgical celebrations that go beyond the purely religious aspect. The events held in the streets of the town, in fact, are real gathering events, among the oldest and most picturesque of the island. The program of Holy Week has been made known these day...
Continue
Corbule, Canestri and Pontine of Castelsardo: a story of interweaving
The Sardinian tradition of craftsmanship has an extremely rich and varied history with regard to the art of weaving and production of baskets: this is due to the vast amount of raw materials that can be used successfully in this practice, such as the asphodel , rush, straw and dwarf palm.
Continue