Share
Sabbioneta, located five kilometers from the river Po, is one of the best examples of the Lombard Renaissance architectural style, closed by the mighty defensive curtain wall which can be accessed through austere and imposing monumental doors. Particularly renowned are the antiques market held every first Sunday of the month, excluding January and August, and the Sabbio Summer Fest during the summer. In Sabbioneta you can taste and buy many typical products of the Mantuan lands. 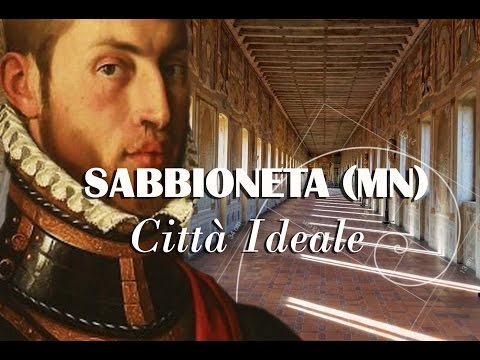 The village of Sabbioneta (Sabiùnèda in the Casalasco-Viadanese dialect), one of the most beautiful towns in Lombardy, is crossed by the 45th parallel. Its name derives from the Latin sabulum, sand. The city was founded by Vespasiano Gonzaga Colonna between 1554/1556 and 1591, the year of his death, in the place where there stood a fortress of his grandfather Ludovico and an ancient settlement. Placed on an alluvial ground between the Po and Oglio rivers, as well as along the route of the ancient Via Vitelliana, it occupied a strategic position in the heart of the Po Valley. For Vespasiano Gonzaga, Sabbioneta had to be above all a fortress and the power of its wall circuit certainly made it, at that time, one of the most armed bulwarks of Lombardy of Spanish domination. Sabbioneta was above all the capital of a small State placed among the great regional states: the Duchy of Milan to the west, ruled by the Spanish governorship at that time, the Duchy of Mantua to the east over the river Oglio, governed by the primeval line of the Gonzagas, cousins ​​of Vespasiano, and the Duchy of Parma and Piacenza to the south of the Po, dominated by the Farnese family, supportive and friend of Gonzaga himself. The territory of the small state of Sabbioneta was mainly concentrated to the eastern ramification of the diocese of Cremona and constituted a forced crossroads both for the commercial traffic in the middle course of the Po, and for the communications between the lower Brescia and Emilia. The most prosperous period in the history of the city was in the years of its rebuilding, under the rule of the prince Vespasiano Gonzaga Colonna, of which it became the residence.

The town, built according to the humanistic principles of the ideal city, houses within it several monuments such as the Palazzo Ducale or Palazzo Grande, ducal residence and place for the administration of the State, the Teatro all'Antica or Teatro Olimpico (1590) designed by Vincenzo Scamozzi, the first theatrical building of the modern era built specifically for this function, the Gallery of the Ancients or Corridor Grande, appointed to host the collection of ancient marbles as well as the hunting trophies, the Palazzo Giardino or Casino, a place dedicated to the otium and valuablely redeveloped between 1582 and 1587 by Bernardino Campi and his team of collaborators, the churches of the Assunta, Incoronata, del Carmine, the Synagogue and the historic Jewish quarter, today no longer inhabited by a community, with its activities of printing, founded in 1567 by Tobias Foa. Noteworthy in the area are the church of Sant'Antonio Abate in the hamlet of Villa Pasquali designed by Ferdinando Galli da Bibbiena and built by his son Antonio Galli and the small Sanctuary of the Madonna delle Grazie in Vigoreto formerly annexed to the Capuchin convent.

In 1970 Sabbioneta filming was made of the film Strategia del spno by Bernardo Bertolucci. On the occasion of the film, the town assumes the imaginary name of Tara. More recently (eighties) in Sabbioneta were also made the shooting of the film I Promessi Sposi and between the columns of the Galleria degli Antichi, the scene of the "Pest" is filmed. Also for the French film Marquise, released in 1997 under the direction of Vera Belmont, some scenes were shot at Sabbioneta.

The Municipality is part of:
I Borghi più belli d'Italia
Paesi bandiera arancione

Via Castello, 62, Monzambano (Mantova)
43.16 Kilometers from Sabbioneta
Polirone's Monastery and Civic Museum
The Monastery of Polirone is located in San Benedetto Po, in Lombardy.

Via Castello, 1, Monzambano (Mantova)
43.43 Kilometers from Sabbioneta
Osteria La Dispensa
All the delicacies of the Mantuan cooking are served using only natural and seasonal products.

Via Galleria 3, Sabbioneta
VAUDEVILLE CAFÉ - ENOTECA - OSTERIA
Café in the city center in front of the Teatro Olimpico.

Via Vespasiano Gonzaga 14, Sabbioneta
OSTERIA LA LUMIRA
Beautiful location on the banks of the Po river...

Viale Po 3, Gualtieri (Reggio Emilia)
12.58 Kilometers from Sabbioneta
Trattoria La Colomba
Small family-run tavern where you can enjoy the typical dishes of the Mantuan tradition as the bi...

Recipe: Pumpkin tortelli from the village of Sabbioneta, the flavors of the autumn countryside
The pumpkin embraces voluptuous amaretti, fruit mostarda and Parmigiano Reggiano. To enclose them, a thin casket of fresh pasta. They are the famous tortelli di Sabbioneta, typical of the city of Mantua and of all its territory, scattered with villages set in the green countryside of Lombardy. Among these there is Sabbioneta and in this recipe we propose the pumpkin tortelli that are prepared in this village founded in the sixteenth century by Vespasiano Gonzaga Colonna. A pasta dish that colors the tables in fall and whose particula...
Continue
Four steps ... in 4 fortified villages
4 Fortified villages that intrigue with their defensive face. And within the walls that surround centuries of history, here is the ancient core of villages that seem suspended in time and that have much to tell. Masterpieces of art kept tenaciously in time within defensive walls. The fortified villages are a continuous discovery, constellate Italy and represent a unique - indeed - to be protected and known. We offer you four, to start this journey in search of excellence and value.
Continue
Italian villages in movies, when cinema is set inside the villages – Episode 1
Italian villages are natural sceneries for arthouse masterpieces. From north to south, here are some location used for famous movies or by great directors, from Borghetto (Luchino Visconti) to Sabbioneta (Bernardo Bertoulucci), from Savoca (Francis F. Coppola) to Tremosine for a James Bond episode.
Continue