A trip to Otranto

Splendid Salento resort that offers its visitors a unique and exciting seaside holiday between the Bay of Turks and Porto Badisco. 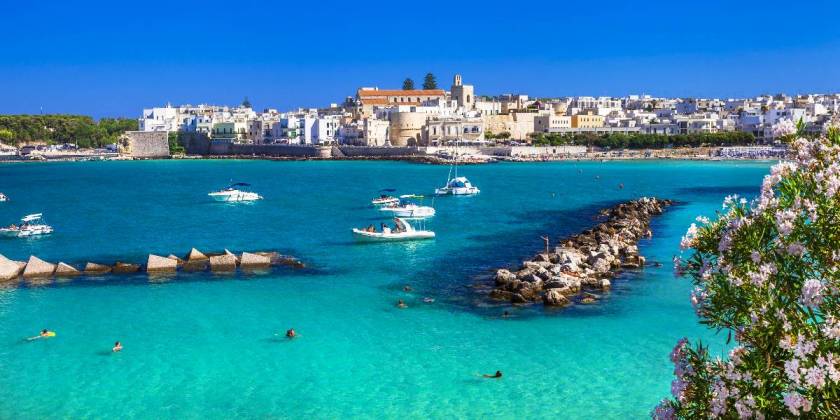 Due to its particular position and an enviable mix of culture and history, Otranto is one of the most beautiful villages in Italy and on the list of things to see absolutely along the Adriatic coast of Salento. Many people know it to be the first city in Italy to see the sun in the morning, when the warm rays of the sun reach the white houses in the historic centre. That's why we also recommend a visit on New Year's Eve, when Otranto hosts the famous Alba dei Popoli event.
The city of Salento also offers the opportunity to spend a beach holiday in complete relaxation, choosing between the Bay of the Turks and Porto Badisco. 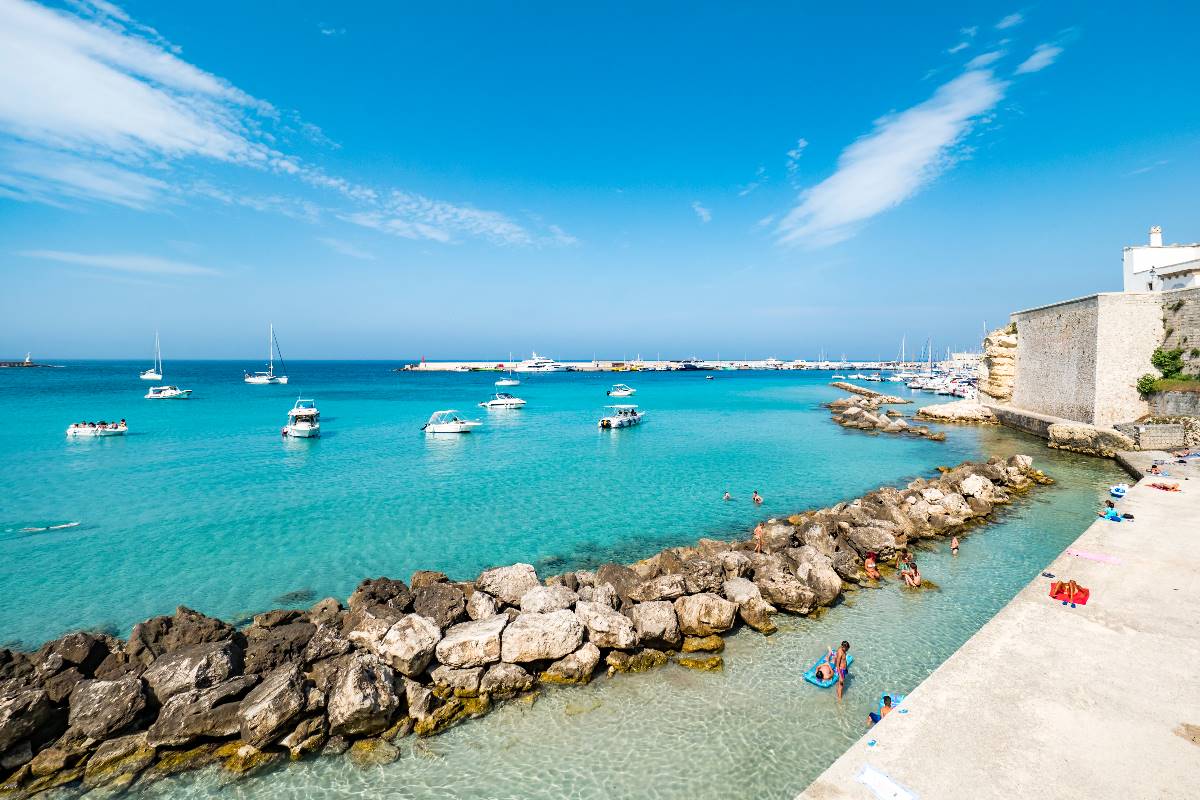 Recognized as a Messenger of Peace Site by UNESCO, the ancient village of Otranto gives its visitors an ever new emotion. Visitors' favourite activity is strolling along Corso Garibaldi, full of local antique shops, clothing and souvenirs. Crossing Corso Garibaldi you reach Piazza del Popolo, where the late eighteenth century clock tower stands out. Continuing from here you will quickly reach Porta a Mare, a few minutes from the port of the city, from where you can enjoy one of the best views of the whole Salento. The most scenic point where you can observe the infinite beauty of Otranto is the Pelasgi bastion. Remaining instead in the heart of the historic center, do not miss a visit to St. Peter's Basilica, which remains one of the most representative medieval buildings of the Byzantine building tradition. Just as entering the Cathedral of Santa Maria Annunziata means to immerse yourself in a place rich in art, history and love. Its construction dates back to the 12th century, with the aim of being the most important church in the whole territory. Therefore, it should not come as a great surprise that it is the most imposing cathedral in Salento.
Over the centuries the religious building underwent profound changes, dictated by the different peoples who dominated the city. Originally born as a Christian church, the Cathedral of Santa Maria Annunziata was converted into a mosque during the Turkish domination (late fifteenth century). Another evidence of the close link between the cathedral and the history of the city is the fascinating mosaic floor. The spectacular mosaic preserved by the church is of Norman origin (second half of the 12th century). 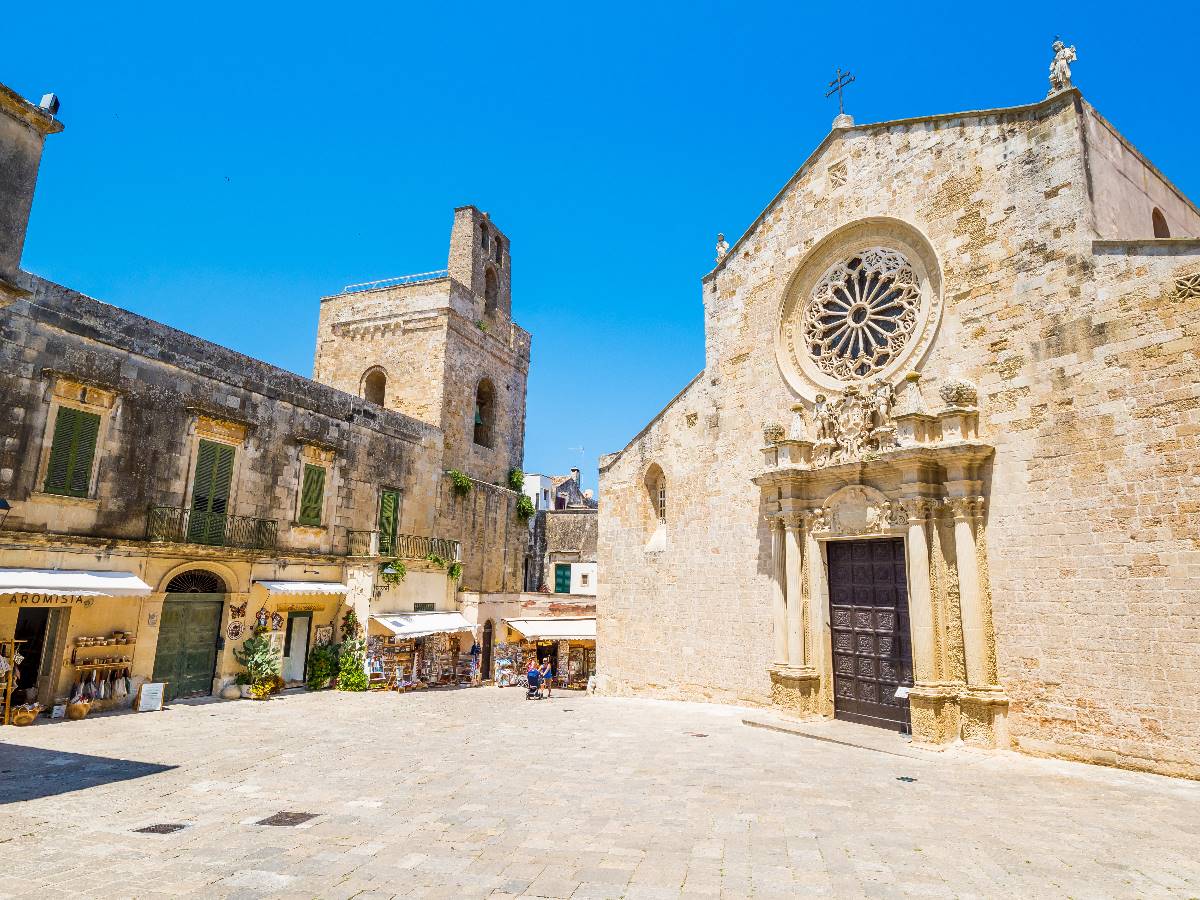 To absolutely visit the Aragonese Castle which remains one of the most suggestive places of Otranto. As the name suggests, the ancient fortress dates back to the end of the fifteenth century, after the Sack of Otranto, at the behest of Duke Alfonso of Aragon. Today the manor is a leading cultural centre within the Salento territory. We recommend a visit to the permanent collection entitled 'The Places of Prehistory', with the Grotta dei Cervi and Porta Badisco as protagonists. One last curiosity: the Aragonese Castle of Otranto is the source of inspiration of the author Horace Walpole to the masterpiece The Castle of Otranto, famous for having inaugurated the Gothic novel's trend all over the world. 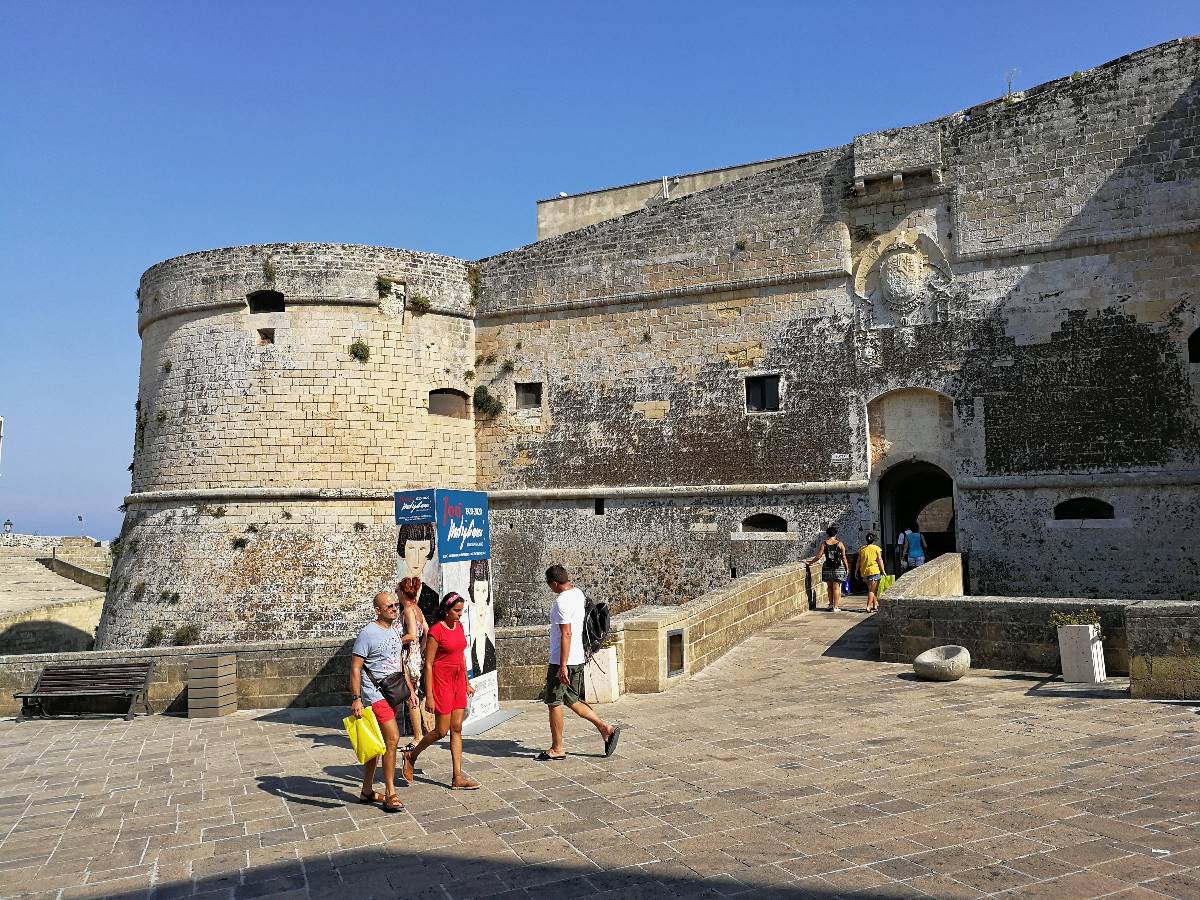 A little further north of Otranto lies the Bay of the Turks, so called because historians agree that the landing of the Turks in the second half of the 15th century was located on this stretch of the Salento coast. In the 2000s, the Bay of the Turks officially entered the list of the 100 most important places to be safeguarded in Italy by the FAI (Italian Environmental Fund). The clear sea water and the Mediterranean maquis around the beach give an unforgettable day at the sea in the northeastern tip of Salento. A few hundred meters from the bay there are the Alimini lakes, inserted in the green oasis where the beach itself is located. The protected oasis of the Alimini lakes is the ideal place to spend a few hours in complete relaxation if you love birdwatching. 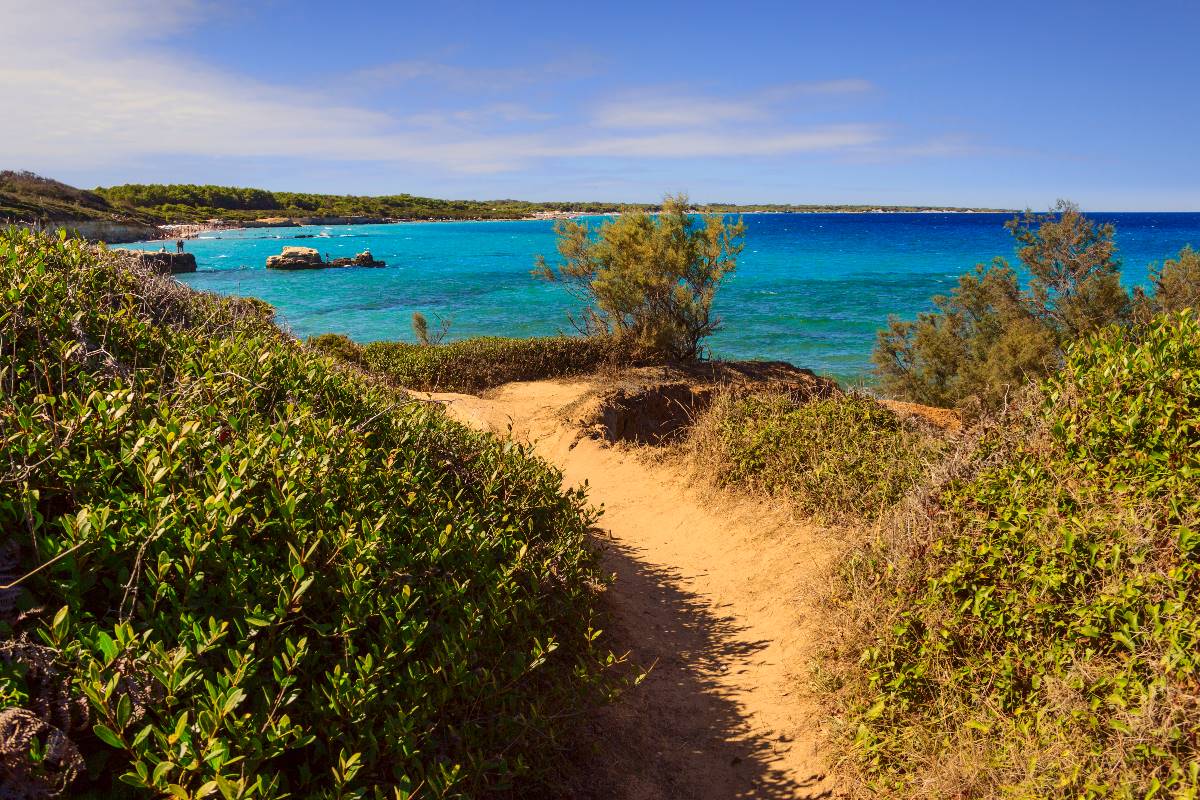 In most of the rankings where the 10 or 5 most beautiful places to go to the sea in Salento are presented, Porto Badisco always occupies a special position. Located only 10 km south of Otranto, the beach of Porto Badisco is not only crystal clear water and shallow water suitable for everyone, but also a place steeped in history. Here, in fact, there is the Grotta dei Cervi (Deer Cave), which contains over three thousand pictograms dating back to the Neolithic period and depicting hand, animal and human footprints. According to speleologists, the pictograms found in the cave date back more than 8 thousand years. It was once also known as Aeneas' Cave. Popular tradition has it that the legendary character of Virgil's Aeneid landed in Porto Badisco after his escape from the city of Troy with his father Anchises. 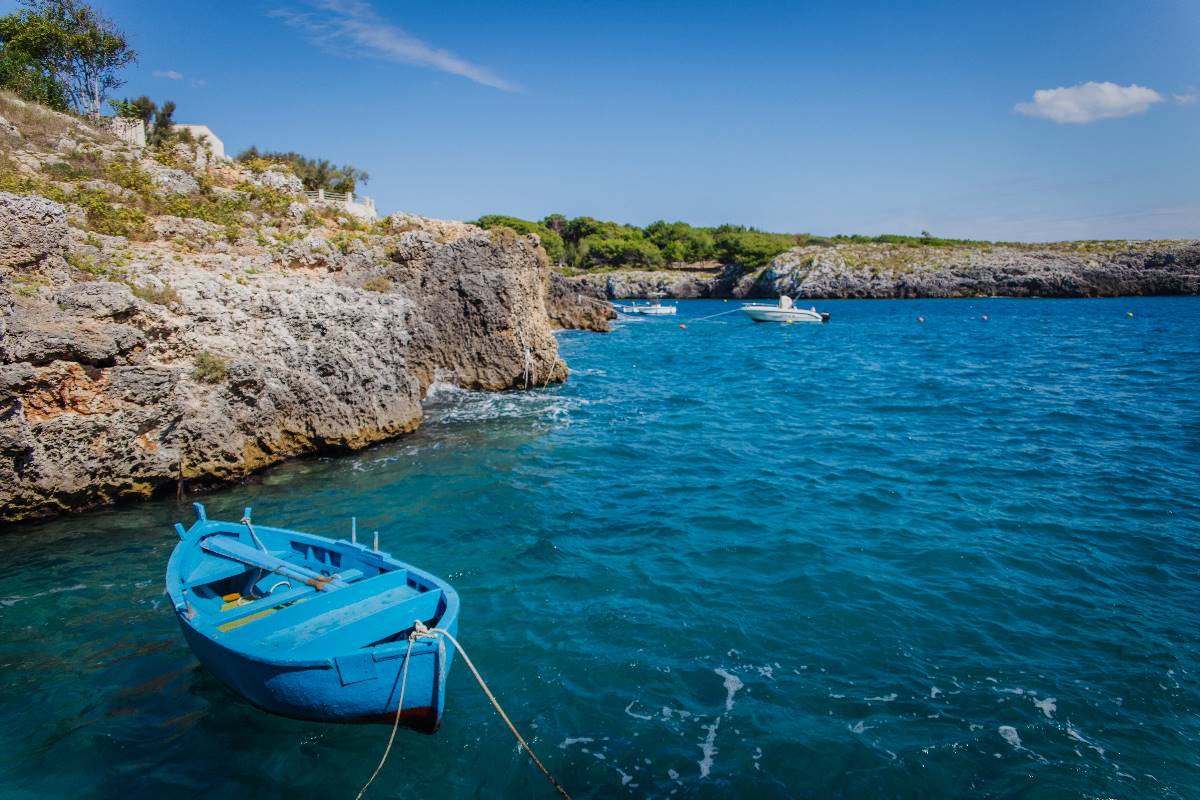 Deers' Cave
St. Peter's Church
Hypogeum of Torre Pinta
More...
are you an Italian villages lover?
Join our Community
and share you experiences!

Polignano a Mare: a destination to discover all...
Compiano, the magical village of Val di Taro
Casole d'Elsa: the open-air museum in the heart...
More...