Share
Angera is undoubtedly a charming lakeside town: it is an ancient village behind which stands the majestic Rocca Borromeo, an Archaeological Museum that collects the most important historical evidence of the area. The lakefront makes it unique for its large green meadows throughout Lake Maggiore. Angera presents itself to visitors as a museum, where you can get to know forty sites of historical, artistic and landscape interest.

A look at Angera 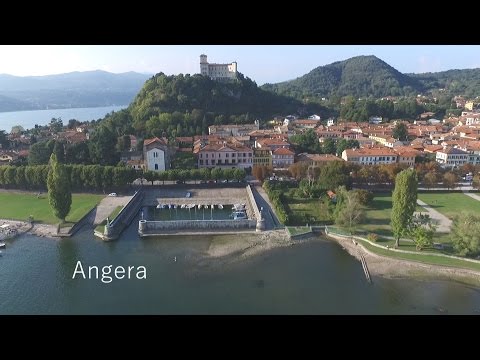 Ceramics finds from insubri and late celtic period testify to a settlement continuity starting at least from the II century B.C. between II and I century B.C. begin to spread in the area always more numerous Roman finds that testify to the successful Romanization of the area. In 49 B.C. even the inhabitants Angera (Ingera in dialect varesotto), as all the people who lived in the territory north of the Po, became Roman citizens with full rights. Later the village experienced a strong commercial development with the exploitation of the natural cove of Angera as lake harbor of exchange for goods transported by water along the Po, Ticino and Verbano, and products that there came via land thanks to Mediolanum-Verbannus Track: from here you could reach the alpine passes of the Novena of the Lucomagno (Lukmanier), the San Gottardo, the Splugen Pass and of San Bernardino. Angera was in fact in roman times, an important river port that put in connection the Cisalpine Gaul with the Rezia.

From the village began from the roman age the stone blocks of Angera and timber of the woods in the Alto Verbano, certainly used for the construction of important buildings in Milan and the territory. There is no certainty on the name of the village of roman age; the identification with the village Sebuinus mentioned on a footing of sculptures housed in the lapidary of the bobbin, is only a hypothesis, also because you do not know the exact origin of this base in the context of the extended borromaiche properties. The oldest name, testified to by the sources of the X century, is that of the Statio, which seems to indicate the role of the port and trading station played from Angera in ancient times. The name change in the early middle ages in Angleria, unsafe etymology, but very probably deriving from the contraction of Ad Glaream i.e. "at the gravel", present abundantly in the alluvial soil where once stood the main core.

In the Middle Ages Angera was the head of a parish which included countries of the two shores of the lake. On its territory, in 1300, there were 20 religious buildings. The history of Angera goes however read also in military key. At least from the XI century in the place of the current Rocca di Angera was a fortified structure that then became the property of the archbishops of Milan. In the thirteenth century the property passed into the hands of the Visconti family, who transformed it into a majestic fortress, in a dominant position on the whole country. In 1449 it was purchased by the family Borromeo, current owner. Angera assumed the title of city in 1497, for the appointment of Ludovico il Moro.

The history of Angera is narrated in the Civic Archaeological Museum, located in Via Marconi 2, in the center of the ancient village. The museum is located in a beautiful building in the fifteenth-century with portico colonnade.

The Rocca Borromea of Angera is one of the main points of interest in Angera. You can visit and hosts the Doll Museum, a collection of more than one thousand pieces among the richest in Europe, recently completed by the acquisition of precious french automata, all working. In another wing of the castle you will find the Museum of the childrenswear with heads collected between the nineteenth and twentieth century.

At the level of the lake, the walk "Allea" offers fantastic sunsets and a large space on the lakeside. Another point of interest is certainly the Oasis of Bruschera and isolino Partegora, protected area where you can see fauna and flora typical of Lake Maggiore.

Village of Angera
Municipality of Angera

the Municipality is part of:
Lake Maggiore, Comabbio, Monate and Varese Authority

Sanctuary of Our Lady of the Shore
On the lakefront of Angera, to close the Piazza Garibaldi in front of the Austrian port, stands t...
Piazza Giuseppe Garibaldi, Angera
Vintage Toy and Doll Museum
The vintage doll museum of Angera, in sixteen rooms of the Rocca Borromea, exhibits especially vi...
Via Rocca Castello, Angera
Holy Mount of Orta
Is the same Salome to recall the incident: "Together we did stage ... in Orta ... where the nearb...

Via Caire Albertoletti, 31, Orta San Giulio (Novara)
13.42 Kilometers from Angera
The Basilica of San Giulio
According to the legend, around 390 the holy reached the island sailing on its skirt and liberate...

Isola di San Giulio, Orta San Giulio (Novara)
13.90 Kilometers from Angera
Baptistery of St John the Baptist
The Collegiate Church of Santo Stefano in the hamlet of Lenno is one of the cultural and artistic...

Via Santo Stefano, Tremezzo (Como)
14.08 Kilometers from Angera
Isola Bella
Isola Bella, located in Lake Maggiore, is part of the group of the so-called Borromean Islands an...

Via Roma, 27-37, Castiglione Olona (Varese)
22.62 Kilometers from Angera
Monastery of Torba
The Monastery of Torba is located in Gornate Olona, in Lombardy, on the slopes of the hill on whi...

Hotel Belvedere
The Belvedere hotel, immersed in the enchanting scenery of the Isola dei Pescatori, offers a uniq...

Recipe: Pan De Mej - A typical Angera dessert
Pan De Mej is a typical dessert from the village of Angera that can also be tasted in other places in Lombardy. The name Pan De Mej comes from the fact that it is made with millet. Millet, together with other flours, was used to make bread. Over time, the Pan De Mej has been transformed into dessert cookies and now I will explain you how to prepare them at home. Ingredients: Flour 00 200 gr Maize Flour 300 gr Butter 150 gr
Continue
Angera launches the dialect... digital!
It rises on the Lombard side of Lake Maggiore, which dominates the southern edge, and is one of the most fascinating fortresses in northern Italy. We are talking about the Rocca Borromea of ​​Angera, which many tourists admire in all its beauty while walking along the Arona lakeside, which is on the opposite shore, the Piedmontese one, right in front of the Angera castle, perched on a promontory and dating...
Continue