Share
The village of Cividale del Friuli was founded by Giulio Cesare with the name "Forum Iulii", from which the whole region took its name, becoming the Lombard capital of Friuli. In the village the Lombard temple (unesco heritage), the Celtic hypogeum, the Church of Saints Pietro and Biagio, the Collegiate Parish of Santa Maria Assunta, its museums and the suggestive Ponte del Diavolo are worth a visit.

A look at Cividale del Friuli 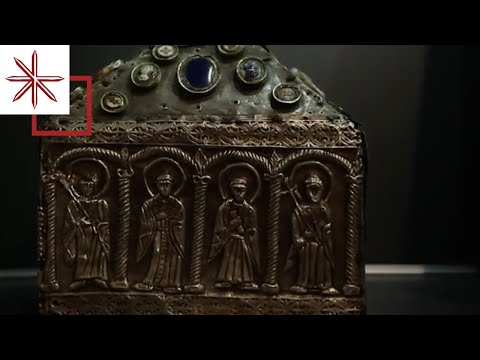 Video by Longobardi in Italia

The village of Cividale del Friuli (Cedad in Slovene) was founded by Giulio Cesare with the name Forum Iulii, from which the name of the whole region became,, the Longobard capital of Friuli. Between the seventh and eighth centuries it was called Civitas, Civitate (m) of the Forum Iulii. At the end of the eighth century Paul Deacon brought it back to him as Civitas vel Castrum Foroiulianum. In the tenth century, being allocated to the eastern part of the Lottery kingdom, he began to call himself Civitas Austria. By shortening the official name, the population called it Civitate (m), from which the local names of Sividàt, Zividàt, Cividàt and later, descended around the fifteenth century, first in literary terms, that of Cividale.

The human presence in the area where Cividale rises today dates back to ancient times, as evidenced by the prehistoric sites of the Paleolithic and the Neolithic found just outside the city; they are accompanied by abundant testimonies of the Iron Age and the Venetian and Celtic times dating back to the 4th century BC. The strategic position of this primitive settlement induced the Romans to settle down, perhaps founded in the middle of the 2nd century BC. a castrum, of obvious military nature, which was later elevated by Giulio Cesare to forum (market). Subsequently, the site was elevated to municipium, being attributed to the Roman tribe Scaptia and finally to the rank of Regio X Venetia et Histria when Attila raced to Aquileia in the fifth century. In 568 came from Pannonia the Longobards, of Scandinavian origin, whose king Alboino immediately elected the Roman Forum Iulii as the capital of the first longobard ducat in Italy and placing his nephew Gisulfo as his duke. Renowned for its capital, Civitas Austriae, the Lombards erected impressive and prestigious buildings, and in the surrounding area founded fortified structures assigned to the making, the noble roots of that German people; in 610 Cividale was looted and burned by the Avari, called by the Lombard king Agilulfo (then headquartered in Milan) to punish the rebellion of the Duke "Friulano" Gisulfo II. In 737, during the reign of Liutprando and to escape Byzantine incursions, the Patriarch of Aquileia Callisto decided to transfer his seat there, as did the Bishop of Zuglio who was cast out of Callisto himself. The city thus increased its role thanks to this important ecclesiastical presence; already a few decades later, in 796, the council was re-confirmed the indissolubility of marriage.

In 775 the Duchy of Friuli was invaded by the Carolingians, and the Lombards, with their Duke Rotgaudo in their heads, lastly opposed the arms of the Franks. Defeated by the ancient rulers, Carolingians established the Eastern brand of Friuli, retaining the Civitas Austriæ capital. The latter became the seat of an important court, especially during the march of Eberhard who attracted men of culture from all over Europe. In the 10th century, ie in the Ottoman era, the Friulian brand was downgraded to a county (or an area) and first placed in the brand of Verona and then in Carinthia (the latter being first part of the Duchy of Bavaria and subsequently asserting itself Duchy). The redeployment of powers at the central and northern European level left an important place for the patriarchs who gained their possessions and power from the beginning of the tenth century and in 1077 became free feudal lords of the Holy Roman Empire on a vast territory. Thus the patriarchal state lasted until 1419. Cividale remained, however, the highest political and commercial center of all Friuli, rivaling from the 13th century with Udine, which was in a strong ascendancy thanks to a more congenial geographical position. In 1353 Emperor Charles IV, after a bloody revenge by his brother Nicholas of Luxembourg (1350-58) - and also caught up against the Cividaleans to punish the assassination of Predecessor Bertrand - gave Cividale the opening of the " University.

In 1553 Cividale set up a Venice Ordinary Ordinary, chosen by the Senate in the nineteenth century of the Venetian patriziate, and in 1559 finally established its autonomy and its territory from the Patria del Friuli, thus unleashing from the Invisa Udine. In 1797 with the Treaty of Campoformido between Napoleon and Austria Cividale passed to the Habsburg Empire; after the brief period in which he was part of the Napoleonic Kingdom of Italy, he was re-assigned to Austria by the Vienna Congress (1815). Between 1848 and 1866 there was the presence of a lively Risorgimento movement; in 1866, after the Third War of Independence, it was annexed to the Kingdom of Italy with Veneto and Friuli and in the period known as Belle Époque was the scene of an empowering political activity. During the First World War, Cividale hosted the command of the Second Army and was damaged by air bombardments; occupied by Austro-Germans following the defeat of Caporetto, the city was regained by the Italians at the end of October 1918 after the victory over Piave. In the following years he was the hub of illustrious personalities given to Fascism. During the Second World War (1943) the city was annexed with all Friuli to the III Reich and here were also deployed Cossack troops and allied allied Germans. Its territory consumed not only civil war, but also a dramatic episode of struggle between Ottoman partisans (Liberals, Catholics, Shareholders and Monarchs Military) and Garibaldi (Communists and Socialists at the orders of the 9th Yugoslav Corps). In the second post-war period, Cividale was the seat of the command and some departments of the Mechanized Brigade "Isonzo", which was defended on the eastern border in the event of invasion by the Warsaw Pact, where some members of the Infantry Stallion held various works defensive, including the Purgesimo Gallery. The particular position in this historical and geopolitical context led to the presence in the area of ​​the Gladius Organization - a national articulation of NATO's Stay Behind - to which mainly Alpine and former Alpine troops trained to organize armed resistance in the territory in the event of a Soviet invasion.

They are definitely worth a visit to the Lombard temple (Unesco heritage), the Celtic hypogeum, the Church of Saints Peter and Biagio, the Cathedral of Santa Maria Assunta, its museums and the impressive Devil's Point.

Even at the table, the village of Cividale del Friuli boasts some food and wine excellence. Particularly important wines, cheeses and confectionery: Gubana, a typical sweet of the valleys of Natisone, made from sweet pasta sweetened with a filling of walnuts, raisins, pine nuts, sugar, grated gratin of lemon, spiral shape and cooked in the oven, gubanettes, similar to gubana but smaller, and loaves, fried sweet or savory pasta filled with raisins, pine nuts, nuts and hazelnuts.

the Municipality is part of:
Wine town

Via delle Valli, 2, Marano Lagunare (Udine)
42.12 Kilometers from Cividale del Friuli
River Stella Mouth Natural Reserve
One of the peculiar and distinctive environments of the entire lagoon of Marano, from the remarka...

Sauris di Sopra, 3/A, Sauris (Udine)
70.88 Kilometers from Cividale del Friuli
Lagoon Archeological Museum
The Archaeological Museum of the lagoon in Marano Lagunare exposes, in the palace of the Civic Ce...

Centro Civico, Via Sinodo, 28, Marano Lagunare (Udine)
41.79 Kilometers from Cividale del Friuli
Cjase Cocèl Peasant Life Museum
The Cjase Cocèl Museum of Fagagna, housed in an ancient rural house dating back in some of its pa...

Via Lisignana, 40, Fagagna (Udine)
26.07 Kilometers from Cividale del Friuli
Quadris Naturalistic Oasis
located north-west of the center of Fagagna, the Oasis of Quadris is a Site of Community importan...

Via Pontebbana 74/2, frazione Carnia, Venzone (Udine)
37.77 Kilometers from Cividale del Friuli
B&B Jasmina
Staying at the Venzone Bed and Breakfast you will have the opportunity to visit the imposing medi...

Vicolo Resia 1/2 - 33033, Codroipo (Udine)
37.65 Kilometers from Cividale del Friuli
Malga Alta Carnia cheese
Malga della Carnia cheese made from raw milk is one of the products par excellence along with tho...

Sauris di Sopra, 50 - 33020 , Sauris (Udine)
71.00 Kilometers from Cividale del Friuli
Legnostile Artistic Laboratory
Legnostile is the artistic laboratory that connects the past and present for woodworking but with...

Other Times Pastry Shop, Venzone (Udine)
Struky
The Struky are Gubana's mouthpiece previously offered by the bride and groom instead of the tradi...

Cividale del Friuli is present in issue 8 of our digital magazine e-borghi travel.
Read it now!

Friuli-Venezia Giulia, a thousand border tastes
In Friuli-Venezia Giulia, on the very North-East of Italy, the middle European, the Venetian and the Slavic cultures come together. Like the art and the traditions, the tastes from this area are a combination of different cultures that produce many unique products and recipes that are influenced by the landscapes, the environment and the climate. There are some typical products that have been awarded with the DOP (protected Designation of Orig...
Continue
Castello di Spessa Golf & Wine Resort of Capriva, to discover the villages of Friuli
Cividale del Friuli, Sappada, Venzone: a set of enchanted villages, starting from Cividale, Unesco heritage, passing through Sappada - awarded the orange flag - to get to Venzone, dotted with lavender that colors it with lilac and scented violet brushstrokes. To discover these and many other villages in the region there must be a starting point and then among the locations you must mark the castle of Spessa di Capriva del Friuli, an ...
Continue
Cividale del Friuli: the first capital of Longobardi's kingdom in Italy
Cividale del Friuli, in the province of Udine, was the first capital of the Kindom of the Longobards in Italy at beginner of Middle Age. The Longobards were a Germanic people originally from the current Scandinavian peninsula. The term "Longobardi" derives from lang and bert, long and beard, and indicated the long beard of these fearsome warriors who invaded Europe in the early Middle Ages. The Lombards knew the Christian faith also thanks to ...
Continue
Recipe: Jota, the tasty minestrone of the Friulian villages
In the past, the jota was based on essential and protein ingredients: sauerkraut, beans and cornmeal. The only concession to the throat was given by the pestat, a mixture of lard and aromatic herbs. Nowadays this typical cuisine cooked in the villages of Friuli-Venezia Giulia - also present on the tables of the provincial capitals - is served all year round and, depending on the climate, hot, cold or lukewarm, usually accompanied by wine glasses of the Carso that enhance its flavor. The jota also represents the pleasure of meeting and lig...
Continue
Recipe: the Pinsa, the typical Veneto dessert of the Epiphany
ALSO FOR VEGETERIANS The Pinsa, or Pinza, is a typical dessert of Veneto, Friuli and some valleys of Trentino. Even with the same name are also desserts completely different depending on the location, but in the northeastern regions has some simple and special features, and you can find two very distinct variations, the leavened Pinsa, typical of the area to the left of the Piave, and the unleavened Pinsa, typical of the area to the right of the Piave. The ingr...
Continue
Recipe: the Gubana from Cividale del Friuli
ALSO FOR VEGETERIANS Like many typical sweets of this territory, Gubana represented in the party's food. This typical specialty is loved in all the villages of the Valle del Natisone, but in Cividale del Friuli there are the first testimonies of the recipe dating back to 1409 when it was served in a banquet set up for Pope Gregory XII on a visit to the city. It is a sweet dough paste, stuffed with chopped nuts, pine nuts, raisins and lemon zest. A delight that owes its...
Continue