Share
The fortified village of Vigoleno is one of the most important historical monuments in the Piacenza area, in Emilia Romagna. The village is still accessed through the same door that over the centuries has seen soldiers, ladies and knights pass by.

A look at Vigoleno

On the towers of Vigoleno
Ivan Pisoni - e-borghi Community 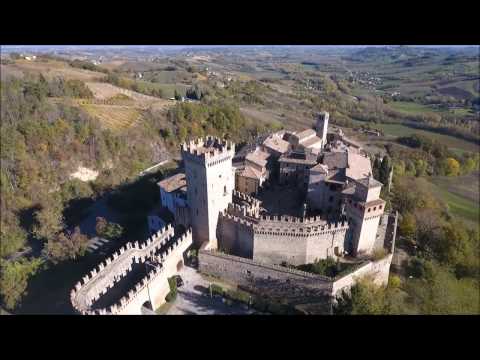 The fortified village of Vigoleno is one of the most important historical monuments of the territory of Piacenza, both for the elegance of its forms that for exceptional integrity of the entire plant Castrense.

Membership for five centuries, almost uninterrupted, to the noble family Scotti, has allowed the village to be among those best preserved. It is a combination of history and art but also of the gastronomic culture, where you can enjoy: salami DOP, tortelli, anolini, game, cheeses accompanied by DOC wines of the Colli piacentini. A real rarity DOC is represented by Vin Santo of Vigoleno, a Passito Wine of limited production kept in small wooden barrels for at least five years.

Given the strategic importance of the territory on the border with Parma, were assumed to defensive structures since the roman age. The existence of the fortifications of Vigoleno, however, is testified for the first time in the XII century, when the village churches protection to the commune of Piacenza. Further defensive additions were ordered in 1306 by Alberto Scotti, the merchant family Scotti of Piacenza. The town of Piacenza occupied following the site by destroying their defenses ricostruendole and after a short time. In the second half of the XIV century, the milanese family of the Visconti got the castle and then lose it and riottenerlo, thanks to a deception, during the war between the Duchy of Milan and Amedeo VI of Savoy. For order of Galeazzo Visconti castle was destroyed almost completely. The the Scotti family obtained the license to rebuild the castle in 1385 and lived in it for almost its entire history, until early 1900, when for economic reasons it was forced to sell it.

In the twenties and thirties of 1900, the castle became the property of Princess Mary Ruspoli-Gramont which invited in his residence extraordinary characters of the elite and the culture of the time such as Gabriele D Annunzio, Riccardo Bacchelli, the pianist Arthur Rubinstein and painters Max Ernst and Alexandre Jacovleff (which is responsible for the decoration of the theater of the castle). In the castle of private property and is currently used as a hotel, you can visit the noble floor, with the ancient halls and the Piccolo Teatro just 12 places.

The village, still today it is accessed for the same port that over the centuries has seen soldiers, ladies and knights. Passed the entrance, you enter the piazza with its center at the sixteenth-century fountain. Next to it rises the Donjon, mighty quadrangular tower which dominates the surrounding landscape. Located in front of the entrance of the castle there is the Oratory of the Madonna delle Grazie, elegant seventeenth century building, built on the ruins of an ancient hospitable for the faithful traveling along the Via Francigena. Going eastwards, you reach the Parish Church of San Giorgio. The Church, among the most suggestive examples of Paduan Romanesque, preserves in the facade the valuable lunette of Saint George killing the dragon. The stones with golden hues of the houses in the village, show sometimes remains of fossil shells that recall a time very far in which the whole area was covered by the waters of the sea.

Vigoleno is also included in the Regional Park of the Stirone and Piacenziano, a protected area that has significant elements of geological and naturalistic interest.

The Municipality is part of:
I Borghi più belli d'Italia
Association for the Castles in the Duchy of Parma and Piacenza

Via Sforza Caolzio, 57, Castell\'Arquato (Piacenza)
4.67 Kilometers from Vigoleno
Luigi Illica Museum
Luigi Illica, born in Castell'Arquato, was one of the exponents of the "Scapigliatura Milanese", ...

Piazza Matteotti, 1, Fontanellato (Parma)
22.73 Kilometers from Vigoleno
The Sanctuary of the Blessed Virgin of the Holy Rosary
Already in 1628 it was associated with the Madonna di Fontanellato the first miracle; the subsequ...

Via IV Novembre, 19, Fontanellato (Parma)
22.94 Kilometers from Vigoleno
Luigi Illica Museum
Luigi Illica, born in Castell'Arquato, was one of the exponents of the "Scapigliatura Milanese", ...

Scalinata Della Riva, 47, Castell'Arquato (Piacenza)
4.72 Kilometers from Vigoleno
The Sanctuary of Santa Maria in Monte Penice
Place in a particularly panoramic place, from its large square you can enjoy a wide view not only...

Strada del Torrino, 1/3, Bobbio (Piacenza)
41.19 Kilometers from Vigoleno
Bridge Gobbo
According to the legend, the Devil contacted San Colombano, promising to build the bridge in one ...

Via Ponte Vecchio, Bobbio (Piacenza)
40.75 Kilometers from Vigoleno
Saint Lawrence Church
The first mention of this church dedicated to San Lorenzo dates back to 1144.

Piazza IV Novembre, 2 - 29010, Vigoleno
Albergo Ristorante Piacentino
The ideal place to find relief and have a rest, it has been open for four generation. The homemad...

Piazza del Municipio, 2, Castell'Arquato (Piacenza)
4.68 Kilometers from Vigoleno
Bar Pasticceria Davico
The pastry's war-horse are the brioches filled with handmade creams with special flavours such as...

Via Caneto, Castell\'Arquato (Piacenza)
4.81 Kilometers from Vigoleno
Casa Benna
From the end of 90’s onward, continuous improvements have been made with regard to vineyard culti...

Loc. Casa Benna, 3 - 29014, Castell\'Arquato (Piacenza)
6.06 Kilometers from Vigoleno
Casa Benna
From the end of 90’s onward, continuous improvements have been made with regard to vineyard culti...

La Rocca Delicatessen, Castell'Arquato (Piacenza)
Culatta
The Culaccia "Il Mandolino" comes from the same part of the Culatello: the most valuable part of ...

La Rocca Delicatessen, Castell'Arquato (Piacenza)
Lo Strolghino
The strolghino was used to check the seasoning of the most valuable and bigger salami.

La Rocca Delicatessen, Castell'Arquato (Piacenza)
Salamino l'Alfiere
Known by the name of "Cacciatorino", seasoned and of small size, to be easily transported in the ...

La Rocca Delicatessen, Castell'Arquato (Piacenza)
Fiocco di Prosciutto "Il Cortigiano"
The fiocco di prosciutto is the walnut of smaller meat at the side of the femur.

Literature in places of history

Vigoleno in Festa ... with anolino

The Night of the Brigands

Domenica in Vigoleno, a small (medieval) world apart
Vigoleno is one of our favorite villages. We had already been there in the summer of 2014 on the occasion of the marriage of a friend, who had decided to get married in this tiny fortified village on the Piacenza hills, and we fell in love with it. So we wanted to go back five years later to visit it calmly during a cool and pleasant Sunday in spring and we realized that Vigoleno, awarded the Bandiera Arancione by Touring Club, ...
Continue
The history of the Orsanti: the first street artists were born in Vigoleno
If there is Mickey Mouse in Disneyland and Prezzemolo is in Gardaland, in Vigoleno there is a bear to act as your host. A wooden bear, don't be alarmed. Crossing the defensive walls and following a short cobbled section that leads from the main entrance to the heart of the village, you will come across a reproduction of an imposing mammal that, placed on a pedestal, will officially welcome you in this small medieval village nestled on the hill...
Continue
Guercino, history and mysteries
Piacenza is synonymous with enchanted villages, with Bobbio, Castell’Arquato and Vigoleno that stand out in the mosaic of the territory and tell an ancient story. And it is no less Piacenza, whose cathedral houses in its beautiful dome the precious frescoes of Guercino: a treasure trove of secret places and historical-artistic routes. You can admire the cathedral of Piacenza in a privileged position from the roof top of the "Lounge Bar L...
Continue
Recipe: Bargnolino the typical liquor in the provinces of Parma and Piacenza
Bargnolino is a typical liquor in the provinces of Parma and Piacenza, which is named after its main ingredient: the berries of the Prunus Spinosa plant, a shrub from with spiky branches that produces blue fruits, vulgarly called prugnolo or black thorn, but in Piacenza’s dialect, everybody calls it bargnò. It is an intense alcoholic and digestive drink that has to be tasted lowly with great moderation. Its preparation begins at the end of September with the harvest of berries, which in this period r...
Continue
Saint George: the knight saint of Vigoleno’s church
Vigoleno is a charming medieval village in the province of Piacenza. Nestled within the mighty walls, it was originally a hospitale, a place where the pilgrims of the time could stay and rest before continuing their journey, the hamlet has remained almost completely intact and still have the ancient charm of time.
Continue