Share
Located not far from Lake Trasimeno, Paciano is a small medieval village nestled on the slopes of Mount Petrarvella. Its historic center keeps its urban structure of ancient origin intact, divided into three parallel streets connected by orthogonal alleys which are accessed from the Porta Fiorentina, Porta Perugina and Porta Rastrella. 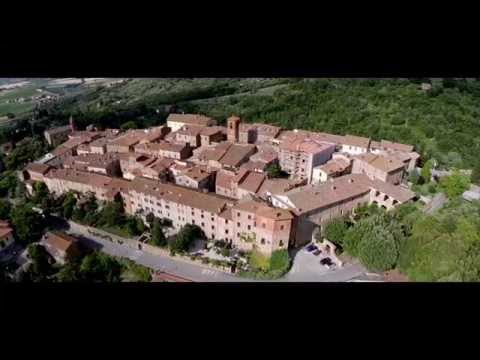 The village of Paciano, in Umbria, is not far from Lake Trasimeno. The medieval village is located on Mount Petrarvella, where in ancient times there was a temple consecrated to god Giano. Three doors can be accessed: Fiorentina, Perugina and Porta Rastrella. The village dates back to the fourteenth century), a period when it was given in the feud of Charles IV to William of Beaufort and subsequently incorporated into the State of the Church (first half of the 16th century).

The old Paciano castle was first mentioned in a diploma by Berengario I, Marquis of Friuli and Emperor, issued in Rome in 917, with which the Paciano and Panicale courts were donated to the marquis of Bourbon Uguccione. The origin of the name, according to some historians, can be attributed to Giano, "Pace di Giano" and to the same Roman goddess may refer to the translation from "Passus Iani", that is, "Passage to the Temple of Giano", whose remains are still visible 'an ancient road connecting Chiusi to Trasimeno, the current road of Ceraseto.

In 1182 Federico Barbarossa confirmed the possession of the estate at Campoleone's badge. In 1258 it is referred to as "Villa Pacani". In 1260 it was again called Castrum Pacani and in 1282 instead as Castrum Novum. From 1443 to 1444, the country must suffer the ruins of Ciarpellone, the former Lieutenant of Piccinino, who after destroying Piegaro is installed as master in Paciano until Perugia redeems him. In "Annali Decemvirali", Paciano is quoted as a beneficiary from 1461 to 1473 of contributions for the restoration of the castle walls and the construction of the tower. In 1489 the Baglioni took over the rule of Perugia and the Oddi with their followers were driven out of the city. They devastated the territory and after attempting to enter Panicale, they came to Paciano and entered there for the betrayal of a Pacianese. The Baglioni went with an army to Paciano to resuscitate him in Perugia. The peacekeepers made known that they were willing to give it to the city and to the Church only after the Pope's decision. The papal legacy thus recovered Paciano in Perugia and the Church and the Oddi with their followers had to promise to live outside the territory of Perugia .

In 1509, for the faithfulness shown to the Church, the Pope exempted all the inhabitants of Paciano Vecchio and its territory from payment of any tribute. In 1672 Pope Clement X acknowledged and declared Paciano Old County. On 12 February 1798 Paciano abandoned the Pontifical State and passed under the rule of the Roman Republic. With the French invasion in 1798, in Paciano on February 13, the tree of freedom was raised and on 17 March the Guardia Civica was established, under the direction of Giacinto Venturelli, already a commissar. On the 28th of April in Paciano, a "Catholic" army of about two hundred men came to Paciano, coming from Magione, who lowered the tree of freedom and installed the Crucifix in its place. In December of the same year the tree of freedom was raised. On October 1, 1799, Republican Deputment was dissolved and the Pontifical Government was rebuilt. In 1809, with the Napoleonic campaign, the Pontifical Government again fell. In 1860, the Royal Commissioner, based in Castiglione del Lago, sent a mandate to the municipality of Paciano to build the Paciano-Collelungo road. This road had long waited for Paciano's people. In the same year, with the passing of the army of Vittorio Emanuele II, Paciano also, with a referendum, chooses to pass under the Kingdom of Italy. From this moment Paciano ceases to have its own "personal" story and is involved in national events.

The village has the typical medieval shape, perfectly preserved. The main street leads from Porta Perugina and ends at Porta Fiorentina. The old town is crossed by 3 parallel routes: Via Sensini, via Danzetta, Via Rossini. Of course, there is a visit to the Palazzo Comunale, the Torre d'Orlando and the Church of San Giuseppe, in which there is a Madonna della Misericordia, painted by the late 15th century by Fiorenzo di Lorenzo. At the Brotherhood of the Holy Sacrament you can admire two wooden tables of the fifteenth century and a fresco by Francesco di Castel della Pieve, a painter considered master of Perugino. In the ancient seat of the Brotherhood there is also the San Giuseppe Collection, with art objects from the Etruscan age until the beginning of the 17th century. Lastly, the Museo TrasiMemo, or the Bank of Memory of the Trasimeno, is worth mentioning.

Via dei Longobardi, 291, Chiusi (Siena)
9.91 Kilometers from Paciano
Concattedrale of San Secondiano
The Concathedral of San Secondiano, in the village of Chiusi, is characterized for its isolated b...

Via V. Emanuele, 91, Castiglione del Lago (Perugia)
11.77 Kilometers from Paciano
Agriturismo Spazzavento
Our Agriturismo dates back to the XVIII Century when a few monks from Città della Pieve, decided ...

Viale Manciati, 2, San Casciano dei Bagni (Siena)
23.08 Kilometers from Paciano
Albergo Ristorante La Fontanella
A quiet environment where everything is studied in detail by the owners Danilo and Nila.

Via I Casali - 06040, Vallo di Nera (Perugia)
71.15 Kilometers from Paciano
Battilani Sapori
In the gastronomic paradise of Umbria...

Via Roma, 11, Castiglione del Lago (Perugia)
11.69 Kilometers from Paciano
Cantine Ravazzi
The Ravazzi Cellars have conquered the area between Umbria and Tuscany as a synonym of genuineness.

Piazza Pertini 8, San Casciano dei Bagni (Siena)
19.02 Kilometers from Paciano
Giacomo Mori
Since the end of the 19th century, the wine, born in the cellars of Palazzone, has travelled the ...

Piazza Pertini, 8, San Casciano dei Bagni (Siena)
19.02 Kilometers from Paciano
Pasticceria Il Campanile
A small place located at the entrance of San Casciano, where you can enjoy excellent croissants a...

Paciano is present in issue 6 of our digital magazine e-borghi travel.
Read it now!

Recipe: Brosega of Paciano
Brosega is a typical Umbrian dish, in particular of Paciano, a village in the province of Perugia, a few kilometers from Lake Trasimeno. Brosega is a simple dish, with very poor origins, which, since medieval times, was distributed on the tables of the most humble Umbrian families. Its preparation is also very easy. Brosega is a specialty based on sautéed tomatoes and accompanied by a lightly fried onion, to which are added, only ...
Continue
Recipe: the Umbrian Torciglione, typical of christmas holidays
ALSO FOR VEGANS The Umbrian Torciglione is a typical dessert for the holiday season and can be found on the tables of many families. This specialty based on almonds, has very ancient origins, almost legendary, and its twisted shape would recall the cyclicity of the year that dies and is reborn. It seems that the ancient pagan populations of the Trasimeno area used to prepare a votive pandolce with pine nuts and honey during the winter solstice. The name...
Continue