Share
Wandering around the historic center of Irsina is like re-immersing yourself in the past, a city that has kept its charm and splendor unchanged. An enchanting center that never ceases to surprise, with its masterpieces of art, the never monotonous territory, characterized by green hills and mountainous reliefs rich in woods, colorful landscapes of rare beauty, churches and architecture that evoke a glorious past. 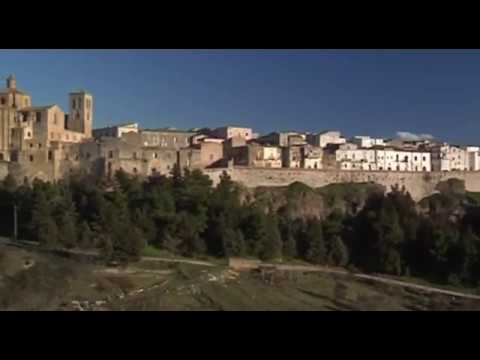 Irsina (Montepelòse or Mondepelòse in irsinese dialect, up to 1895 called Montepeloso) has origins who perdone age greco-roman and this makes it one of the oldest towns of Lucania. From the Middle Ages until 6 February 1895 the name of the country was Montepeloso. As regards the etymology, it seems that the Montepeloso name derives from the Greek plusos, that means the land fertile and rich, amended in pilosum by the Latini. The current name seems to derive from the latin Irtium.

It was besieged and invaded in 895 by the Saracens, who in 988 destroyed; it was rebuilt by Prince Giovanni II of Salerno and was disputed between the Byzantines and the Normans. The territory of Irsina is at the center of the battle of Montepeloso, fought on 3 September 1041, at a short distance from the shores of the Bradano river. The Byzantine Army is guided by Augustus Bugiano (Boioannes); the Norman forces are controlled by Atenolfo, brother of the Prince of Benevento, that also coordinates the military the Lombards. The knights are led by William of Altavilla and Argiro. The Normans lanciano the first charge, while the Greeks accuse the coup and fall to hundreds.

William I of Altavilla is sick but leaves his tent, placed above a hill and launches into the fray. According to the reporter Guglielmo di Puglia, the knights Normans sbaragliano the Byzantine forces and the troops that come from Calabria, from Sicily and from Macedonia and a group of mercenaries Pauliciani. According to the historian De Blosiis, hero of the battle is Gualtiero, son of Count Friend. The Byzantines are driven by Norman troops that are successful and, therefore, the city passed under the dominion of Norman. The Normans capture Augusto Bugiano, transfer it to Melfi together with the insignia Byzantine and then to Benevento the Deliver To Atenolfo.

According to the chronicle of the Beloved of Montecassino, Tristan, knight of following the lineage Altavilla in the territory of the Vulture, is the first Norman Count of Montepeloso, one of the twelve baronies of which composes the County of Puglia. In 1059 the Council of Melfi I, the Pontiff Nicholas II, elevates the County of Puglia to the Duchy of Apulia and entrusts to lineage Altavilla. The second Lord of the city, in 1068, is Goffredo, Count of Conversano, a nephew of Roberto il Guiscardo. In 1123 the Pope Callistus II with a bubble Montepeloso elects to episcopal seat, also to counteract the byzantine presence still strong in the country. In 1132 citizens adhere to revolt against Ruggero II and Montepeloso becomes the feud of Tancredi of Conversano, conte di Brindisi, but the following year Ruggero II the punishes for having deployed with the rebels and the ago shaved to the ground.

In the Swabian era was annexd to the county of Andria and after the death of Federico II became a marquisate under the lordship of Manfredi. In 1266, after the battle of Benevento, passed under the dominion of the Angevins, who donated it to Peter of Beaumont count of Montescaglioso and subsequently to Giovanni di Monfort. In 1307 it passed to the dominion of the Orsini del Balzo, that the lost as a result of the conspiracy of the barons, subentrarono when the Aragoneses. In 1586 it was purchased by the rich Genoese family of Grimaldi and finally passed to the Riario Sforza, who were the last feudal lords of Montepeloso.

In 1799 it joined the risings republicans raising the tree of freedom, soon choked by the troops of Cardinal Fabrizio Ruffo. After the unity of Italy was affected by the phenomenon of brigandage.

Certainly deserve a visit to the Cathedral of Santa Maria Assunta, the Church of the Convent of San Francesco and the Museo Civico Janora, which houses the collection of the historian and archaeologist irsinese Janora Michele.

The irsinese economy is based largely on agriculture: in particular on cereal crops and vines. There are also numerous craft activities and different holdings: famous is the buffalo mozzarella from Campania.

History
Human tower's game is practiced in Castell, Spain, in the Catalonia region from the seventeenth century. By there it has been widespread in the centre southern Italy during the Spanish domination. His most ancient testimony in our country is in Scalea (Cosenza) where in a painting of the Madonna of Pietà is depicted a dance among some human towers. Also in Lucania the dream of the overcoming of the limits you is translated into this rite in particular to Ferrandina, Irsina, Melfi and Brindisi, to the mountain. In these villages human towers were composed by six people.

Rules
Usually to conduct the game are groups of thirteen people who form the tower of three floors according to scheme 7 +4 +2 players. In the center is located a perch of wood to which the pizzicantari cling themselves. Once formed, the tower parades by turning on itself with harmony, along a path of about one hundred meters. To be a rhythm in the swirl, players sing nursery rhymes in dialect which incite themselves to not lose balance. Who gives up causes the collapse of the tower: the bump. These are the stanzas, translated from the dialect lucano, singing traditional P’zz’cantò:

Cathedral of Santa Maria Assunta
the church of Santa Maria Assunta is the main church of the village of Irsina in Basilicata.
Largo Cattedrale, 38, Irsina
Janora Civic Museum
The Janora museum of Irsina in Basilicata, collects the collection of art and archaeological find...
Piazza S. Francesco, 8, Irsina
The Norman Castle and the Tower
Within the architectural heritage of Tricarico the Norman Castle and the Tower constitute, togeth...

Via Levi Carlo, 40 - 75019, Tricarico (Matera)
15.92 Kilometers from Irsina
Baronial Castle
The Baronial Castle of Policoro dates back to the eighth century.

Largo Castello, 1 - 75025, Policoro (Matera)
69.37 Kilometers from Irsina
Prison tower
The Prison tower of Rotondella, in Basilicata, is what remains of the sighting tower built in 1518.

Piazza SS. Maria D'Anglona, Tursi (Matera)
61.21 Kilometers from Irsina
Norman Castle
The Norman Castle of Montescaglioso, to which the church of Santa Caterina is annexed, was built ...

Irsina is present in issue 5 of our digital magazine e-borghi travel.
Read it now!

Matera 2019 is now around the corner. But there's not only Matera
An area dotted with rock churches, suggestive places such as the lake produced by the San Giuliano dam and villages: Miglionico with its castle, Ferrandina, Bernalda with the archaeological beauties of the Metaponto marina, the Greek Heraclea (today Policoro) and Grassano , where Carlo Levi was confined before going to the Aliano dei calanchi.But it is above all on Irsina, Montescaglioso and Miglionico that we want to attract your at...
Continue