Share
Longiano, located a few kilometers from the Via Emilia, is a medieval village surrounded by a double wall and well preserved. The historic center offers numerous historical and artistic testimonies to discover, first of all, a visit to the Malatesta Castle cannot be missed. 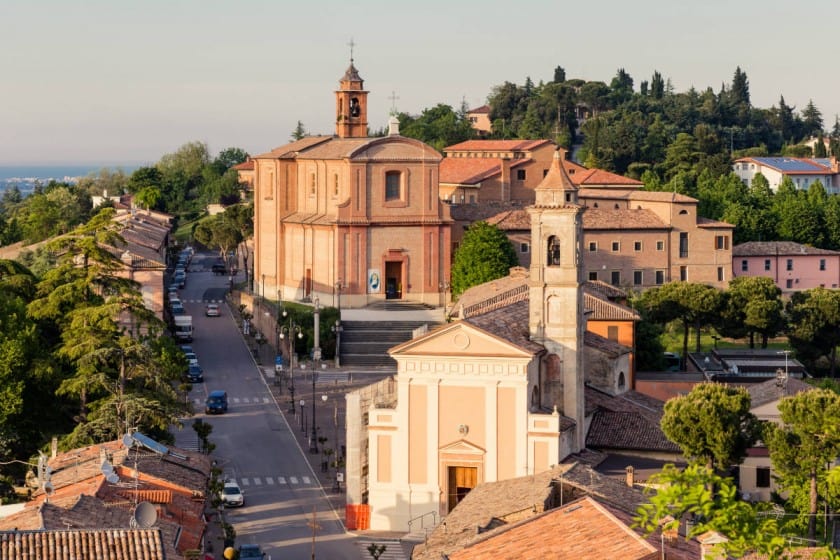 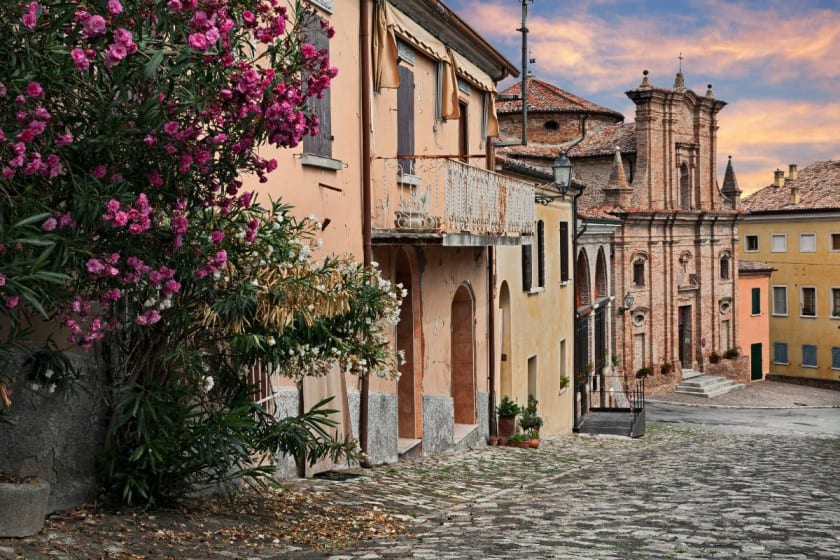 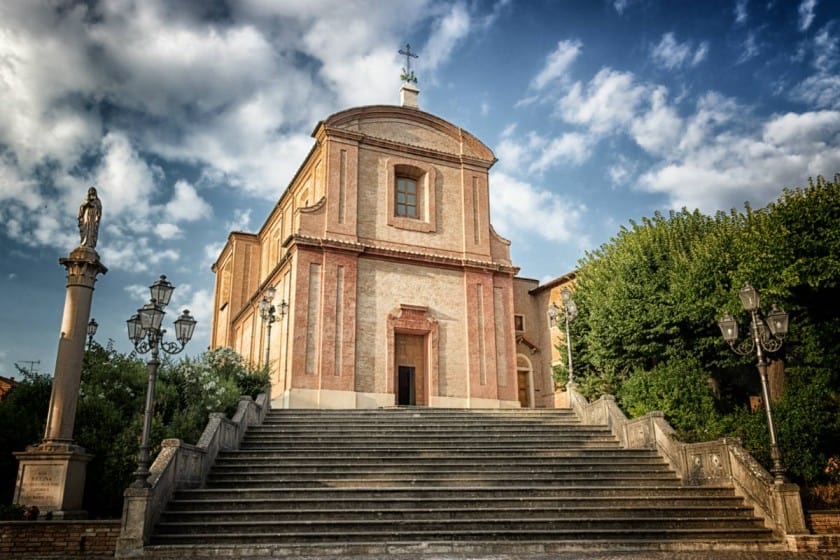 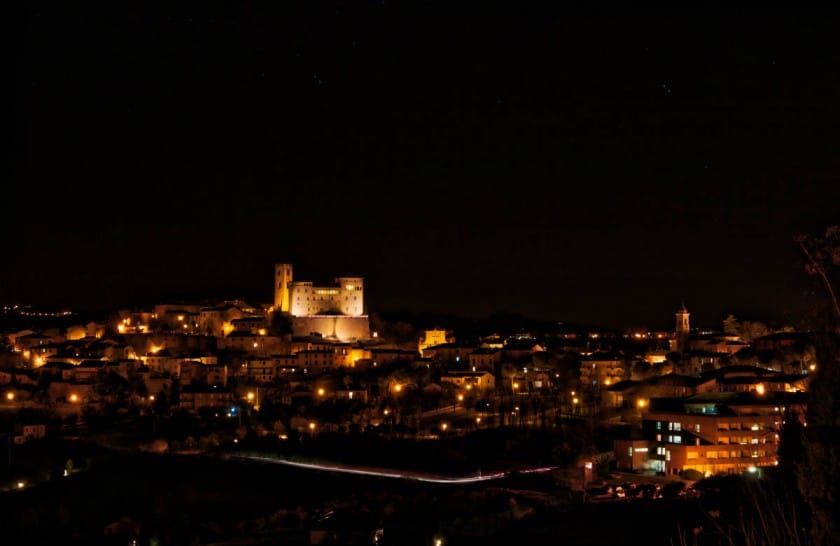 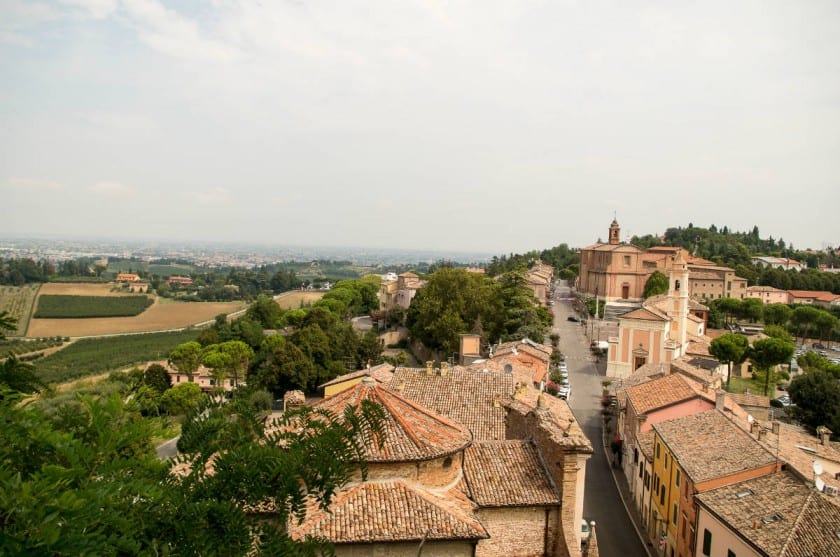 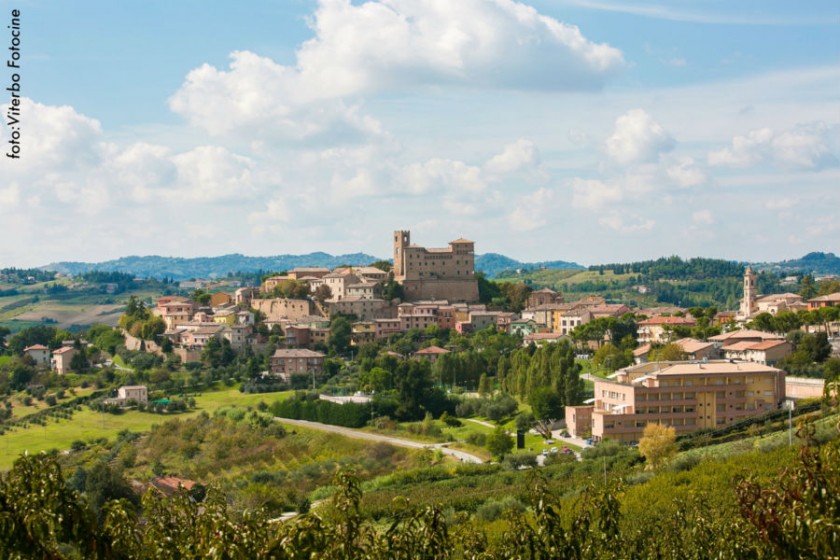 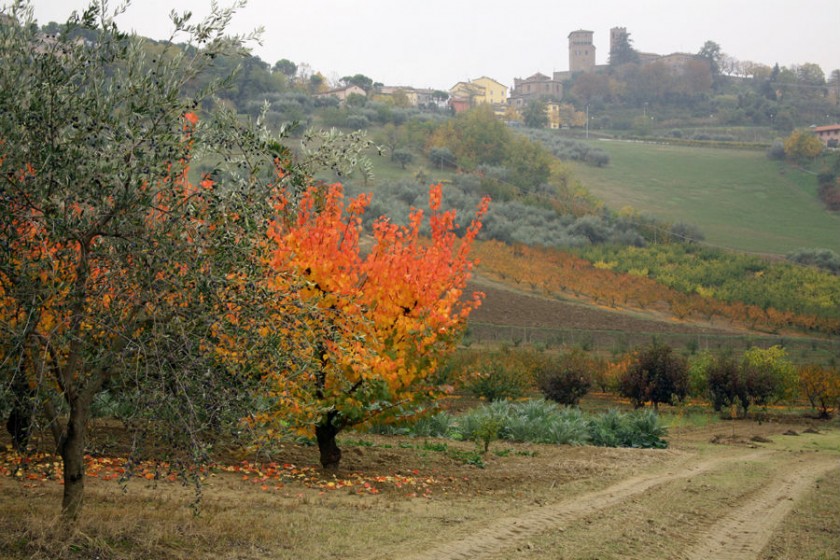 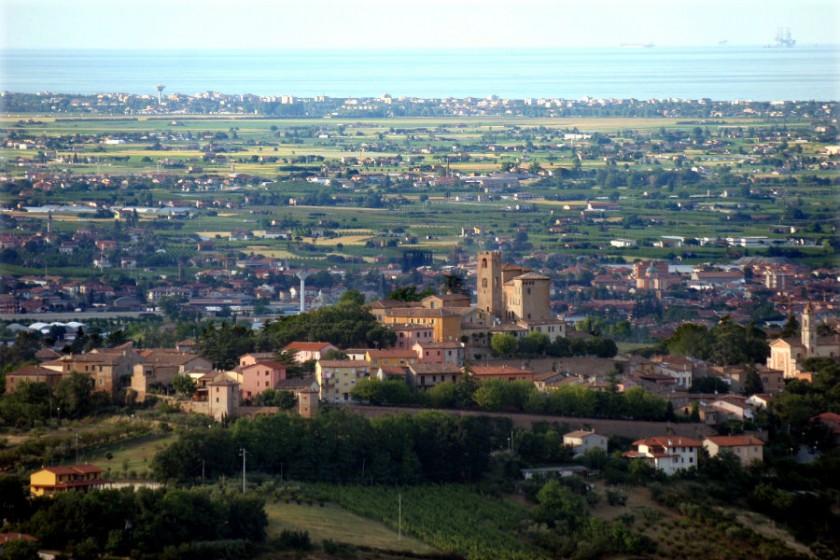 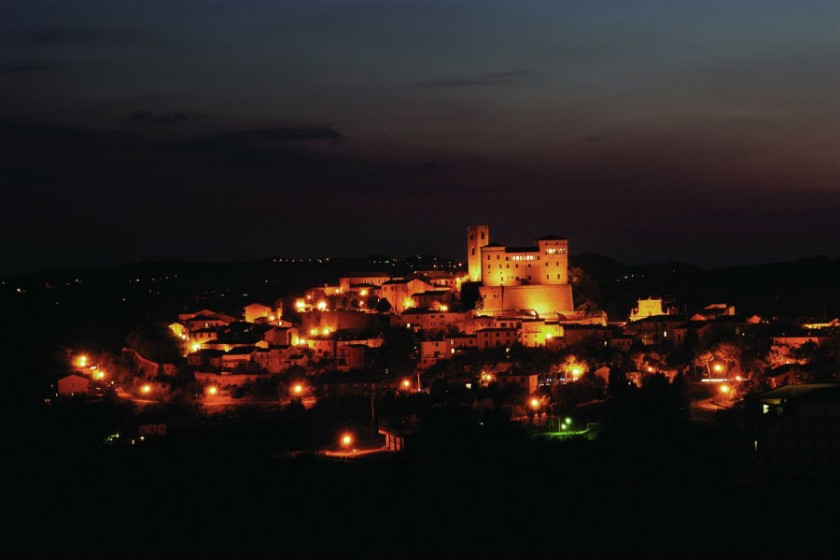 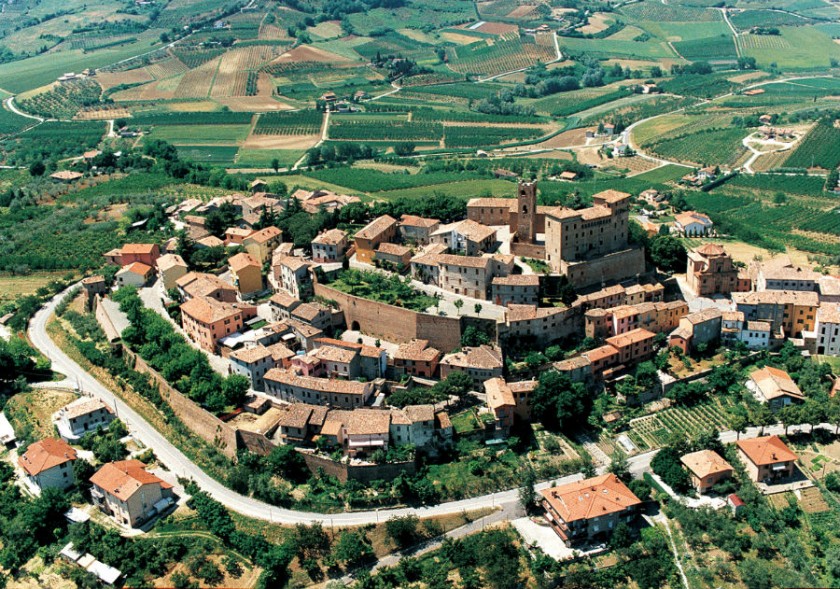 Longiano is located in the Valley of the Rubicone on the first hills in the territory between Cesena and Rimini, in Emilia Romagna, a few km away from the Via Emilia. The old town centre of Longiano, a well preserved hamlet of medieval origins surrounded by double city walls, offers various historical and artistic evidence, with lots of places to discover and rediscover.

Its origins probably date back to a period of time between the VII and VIII century, when the population of the area moved from the plain to the hill, to take shelter from Langobard raids. Longiano reached its greatest rise in popularity when it became the residence of Malatesta family. Subsequently it belonged to the Papal State, and it was also a Venetian dominion for a short time as the monumental tub in the courtyard of the Castello shows. In 1790 it went under Napoleon's sovereignty as the whole Romagna. During World War II Longiano, not so far from the Gothic Line, suffered numerous damages due to the bombing by the Allies: what remains as the evidence is the Rifugio Bellico, that partly crosses the old town centre.

First of all, you should visit the Castello Malatestiano, and also the treasures of the Fondazione Balestra that are guarded there: an authentic collection of works by the greatest artists of the Novecento Italiano, like Guttuso, Maccari, Morandi, De Pisis, Vespignani and a small and precious selection of works by foreign artists like Chagall, Goya, Matisse, Kokoschka and others. The visit continues during four other authentic museums, that show the city's care for culture and art: the Museo Italiano della Ghisa, that exhibits elements of urban decor made between 1800 and 1900 and restored by Neri SPA company; the Museo del Territorio, that collects tools from ancient crafts and evidence of the farming world; the Museo d'Arte Sacra, that inside the exquisite Baroque Oratorio di San Giuseppe collects numerous artworks, vestments, relics and sacred decors; and finally the Galleria delle Maschere della Commedia dell’Arte inside the rooms of the former Convento di San Girolamo, with bronze sculptures made by the artist Domenico Neri. The Rifugio Bellico, a tunnel dug from a rock, that crosses the Old Town centre from Via Porta del Ponte to Via Santa Chiara, is the evidence of the dramatic days of the Front passing and the bombing that also heavily affected Longiano during World War II. The Teatro Petrella is a nineteenth-century jewel, a typical example of an Italian theatre, finely decorated and characterised by an extraordinary acoustics and by a still very lively artistic activity. You can also visit interesting historical churches: the Santurario del SS Crocifisso, that guards a wooden crucifix of the XIII century by an anonymous artist of Giunta Pisano's school, and the Collegiata di San Cristoforo, with masterpieces from 1600 and 1700.

The hamlet rises in a generous territory that offers numerous typical products: from honey to the greatest wines of the Romagna area like Sangiovese and Trebbiano, or even to a scented extra virgin olive oil. Many companies offer the possibility to taste their products on the spot and it also possible to visit the ancient mill Turchi di Balignano. Also, numerous fruit trees colour the countryside during spring: cherry-trees, plum trees, apricot and the DOP nectarine peach. The culinary specialties of Longiano's cuisine are the simple and the tasty ones of the Romagna. Among the fist courses we can find cappelletti, passatelli, tagliatelle al ragù, lasagne, strozzapreti and “puntarine” (a type of pasta). While among the second courses, in addition to the classic piadina romagnola, you can try the rabbit with roasted potatoes, grilled wether, game, meat and cold cuts from "Mora romagnola" and refined pork meat.

Malatesta Castle and Balestra Collection
The Malatesta Castle of Longiano is the permanent home of the contemporary art collection of the ...
Via Porta del Girone, 14, Longiano
Gallery of the masks of the Commedia dell'Arte
The Gallery of the masks of the Commedia dell'Arte of Longiano is hosted in the premises of the E...
Piazza S. Girolamo, 3, Longiano
Italian Museum of Cast Iron
The Neri Foundation, who for years is dedicated to the recovery and study of these elements, hand...
Via Santa Maria, 18/a, Longiano
The Sacred Art Museum
The Sacred Art Museum finds important works of art alongside many priceless, sacred objects such...
Borgo Fausto, 46, Longiano
Territorial Museum
The Territory Museum collects about 6,000 finds coming from the territory of Longiano and from th...
Via Giannini, 16, Longiano
Pieve di San Donato in Polenta
The church of San Donato in Polenta is famous for the poem composed by Giosuè Carducci

Piazza della Libertà - 47032, Bertinoro (Forli Cesena)
17.32 Kilometers from Longiano
Inter-religious Museum of Bertinoro
The Interreligious Museum is set up in the medieval secrets and in the sixteenth century cistern ...

Piazza della Libertà - 47032, Bertinoro (Forli Cesena)
17.32 Kilometers from Longiano
The Basilica of San Vicinio
The chapel which closes the right nave preserves the relics of San Vicinio and its thaumaturgical...

Via Santa Maria, 2, Longiano
Il Poggianino
In the splendid setting of the Marecchia Valley, in the heart of the spectacular Romagna hinterla...

Nove Colli, cycling among the villages in Romagna
Starting from the sea with the smell of saltiness and pedaling immersing yourself in the Romagna landscape. Then drive through hairpin bends that climb over rolling hills, cross villages and, finally, admire the beaches and the blue waves of the waves from above. A day full of emotions that starts from the port of Leonardo in Cesenatico - Forlì Cesena - for the 48th edition of Nove Colli. The appointment is May 20, 2018, when lovers of ...
Continue
Recipe: the Spoja Lorda Romagnola
The spoja lorda romagnola is a typical feast dish that every real azdora (the real lady of the kitchen in Romagna) could do with your eyes closed! Also called the stuffed soup the spoja (puff pastry in dialect) is a delicate egg pasta (very similar to the Emilian puff pastry) filled with cream cheese, cooked in capon broth or hen which is then 'dirtied' (gross from which gross) with the stuffing. They have the appearance of small squares, about two centimeters on each side, made with the spur, the typic...
Continue
Award ceremony: Monte Carlo Master of Olive Oil Contest 2021
On June 5, the Principality of Monaco hosted the most important companies producing oils at the gardens Princesse Antoinette, with an event-prizes of great international scope.The Monte Carlo Master of Olive Oil Contest 2021 has seen the participation of 170 oils from 3 continents who have competed for the various awards divided into categories and assigned by the jury of experts. An event to promote the excellence of the olive oil sectorThe competition, now in its fifth edition, has b...
Continue