Share
Castiglion Fiorentino, whose origins date back to the Etruscan and then Roman times, rises on a hill in Valdichiana. Considering its spiral shape, from a distance it is possible to see the towering Torre del Cassero which dominates the historic center.

A look at Castiglion Fiorentino

CASTIGLION FIORENTINO (AR) - I look down on the...
Luca Spinelli - e-borghi Community 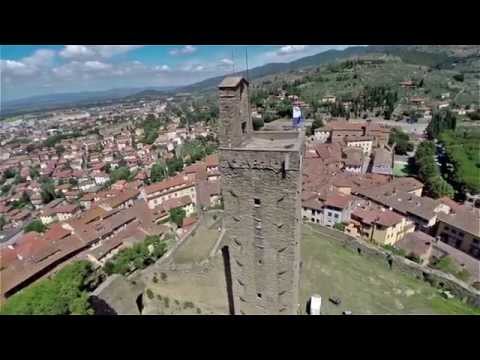 The inhabited center castiglionese developed in Etruscan, already starting from the VI century B.C. crucial crossroads between the two Lucumonie of Arezzo and Cortona city center erigeva on top of the hill, as witnessed the archaeological excavations carried out in the area of the tower the formwork. The Etruscans brought a first reclamation to Val di Chiana, crossing at the time by the river Clanis: this flowed in the opposite sense of the current Channel Master and constituted an important waterway navigable. In the area castiglionese remain testimony to this period many archaeological finds, including the famous deposit of Brolio, found in the nineteenth century in the homonymous hamlet, and consisting of a large amount of bronzes. Joints The Romans, they decided to exploit the fertility of the area for the food requirements of the Urbe. But with the empire of Augustus the panorama changed radically: among the causes of the flooding of the Tiber which occasionally allagavano Rome was considered the Clanis, which was a tributary of the straw, which in turn is a tributary of the river romano. The Romans ostruirono therefore the foce of the Clanis, causing the stagnation of water and the consequent impaludamento of Valdichiana. It is likely that Castulone is expanded in this period, rising on a hill and then being immune from malaria, from which many of the peoples of the inhabited areas of the valley were fled. The inhabited center is recalled by the documents with the name of "Castiglione" not before the X century, when it is a feud of the marquis of Monte Santa Maria. From 1384 the town passed definitively in Florence and from this moment onwards, renamed "Castiglion Fiorentino", will remain under its domain.

Certainly deserve a visit le Logge del Vasari, the Castle of Montecchio Vesponi, the Pieve di San Giuliano and its Collegiate Church and the Sanctuary of the Madonna of the bath.

Strolling in the countryside of Arezzo and looking upwards, behold the thirteenth century walls of the medieval village of Castiglion Fiorentino. The bubbling of the watercourses accompanies the walk like crystal clear music in the background while, immersed in the wonderful landscape of the fertile Valdichiana and following the road that reaches to the historical center of the town. Around, olive trees and vineyards as far as the eye can see, and where cattle graze of the famous chianina herds. Looking to the east, you’ll lose yourself in the fog of the Preappennini  mountains. Overcoming the towers that delimit the historic center, you arrive in the Town Hall square, the heart of the village from which, under the arches of the Loggia Vasari (1513), we can admire the beautiful Val di Chio. Continuing the walk up to the archaeological area of the Cassero, to stopping to rest in the public garden that surrounds the tower. Stretches of walls from the IV century B.C. confirm that this was etruscan area. By climbing to the top of the tower of Cassero, you can enjoy a splendid sight over the village, the Val di Chiana and the Val di Chio. And after you have enriched you spirit by visiting the six churches within the walls and the collections in the Pinacoteca Civica at the church of Sant'Angelo, we sooth and comfort at lunch, ordering in some local restaurant a nice cut of chianina meat, accompanied by a glass of excellent Tuscan wine. In the air there is still the echo of the voice of Roberto Benigni, that in the initial stage of his famous life is beautiful reaches the walls of the country by car, while is mistaken by the castiglionesi for King Vittorio Emanuele III.

the Municipality is part of:
Paesi Bandiera Arancione

Via Porta S. Giovanni - 52046, Lucignano (Arezzo)
15.58 Kilometers from Castiglion Fiorentino
Porta Sant'Angelo
Porta S. Angelo, closed at the end of the 18th century, at the time of the Viva Maria uprisings a...

Piazza San Francesco, Lucignano (Arezzo)
16.17 Kilometers from Castiglion Fiorentino
Municipal Museum
The Municipal Museum of Lucignano houses the main work of the village: the Tree of Love or Golden...

Piazza della Collegiata, 8, Lucignano (Arezzo)
16.24 Kilometers from Castiglion Fiorentino
Municipal Museum
The Municipal Museum of Lucignano houses the main work of the village: the Tree of Love or Golden...

Piazza Mameli, 1-2, Anghiari (Arezzo)
24.59 Kilometers from Castiglion Fiorentino
Cassero
In front of the formwork there is the Piazza delle Logge, in Lucignano

Via Rosini - 52046, Lucignano (Arezzo)
16.47 Kilometers from Castiglion Fiorentino
Medici Fortress
The Medici Fortress was built on a hill for defensive purposes of which today only the ruins remain.

Via Senese Aretina, 80 - 52037, Sansepolcro (Arezzo)
30.25 Kilometers from Castiglion Fiorentino
Borgo I Tre Baroni
Within the green heart of Tuscany, in the Casentino valley, I Tre Baroni is located in a great po...

Via di Camaldoli, 52, Loc. Moggiona, Poppi (Arezzo)
50.06 Kilometers from Castiglion Fiorentino
Albergo Casentino
Casentino is a heap of suggestions and values in which humans and environment are still able to h...