Recipe: The Tortellini from Valeggio

In honor of the tortellino of Valeggio, also known as "Navel of Venus" or "Love knot", the "Feast of the Love Knot" is celebrated annually in Valeggio sul Mincio 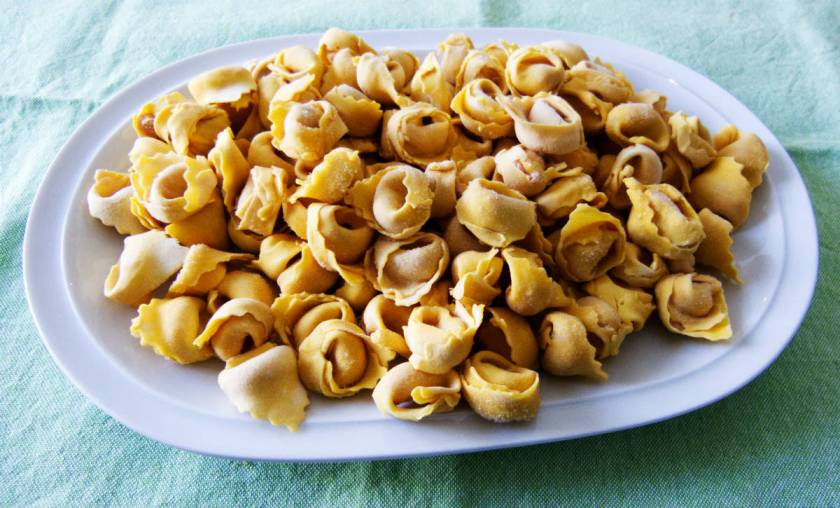 A recipe for egg pasta filled with pork, chicken, veal and beef. Valeggio tortellini are one of the most famous traditional first courses of Veronese cuisine.
The recipe dates back to the legend of the 1300s, when a loving couple, a soldier and a nymph, took refuge at the bottom of the Mincio to escape their enemies, leaving on the river bank a handkerchief knotted as a symbol of their love.
In honor of the tortellino, also called "Navel of Venus" or "Love knot", every year in June, on the Visconti bridge of Valeggio sul Mincio, the "Feast of the Love Knot" is celebrated, during which you can enjoy this specialties on two tables about six hundred meters long in the presence of four thousand diners. Valeggio tortellini can be served both in broth and with butter and sage.
Let's see how to prepare them.

For the dressing
capon broth or butter and sage

Let's start by preparing the meat filling first. Finely chop the onion and brown it in a saucepan with the oil over low heat. Add the pork, beef, chicken and veal cut into small pieces with rosemary and nutmeg. We add pepper and salt, in a few quantities, because raw ham and cheese will give the dough greater flavor.
At the end of cooking, remove the rosemary and let it cool. We mince or whisk the cooked meat with the raw ham, the cheese, the breadcrumbs and a yolk of one of the 5 eggs. We form a ball and wrap the filling in kitchen paper and let it rest for at least an hour.
Let's prepare the pasta now. We sift the flour and add the remaining eggs with half a glass of water and a pinch of salt. Let's work it well and roll it into a very thin sheet. Then cut the dough into 4 cm squares on each side and place a ball of meat filling in the center. We close the square of pasta along its diagonal, making it become a triangle, and we join the two corners, pressing them. Once prepared and ready to cook, we can serve them with capon broth or with butter and sage.

What to see in Borghetto sul Mincio

Visconti bridge
More...
are you an Italian villages lover?
Join our Community
and share you experiences!