An excellent Sardinian revisitation of a typical Spanish first course 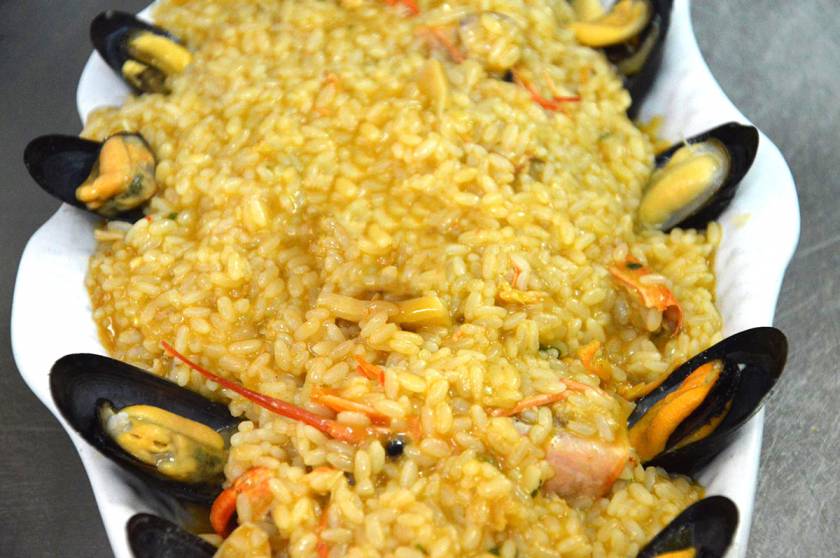 In essence, what differentiates the paella from Alghero to the Spanish one is the use of the fregula instead of rice. But not only: this typical first course of Alghero, a seaside village located on the north-western coast of Sardinia, uses also della bottarga and Sardinian sausage. Unlike what you might think at first glance, this specialty is very recent: it dates back to 2003 and was prepared for the first time during the celebrations for the city's 900th anniversary. Sardinia, and in particular Alghero, underwent Hispanic domination for almost four centuries. This is why the Algherese paella is the gastronomic expression of the cultural contamination between Catalonia and Sardinia.

Cook the mussels in a pan. In the classic pan "da paella" we fry the onion in extra virgin olive oil. Add the crumbled sausage and chopped chicken breast. After a few minutes, add the yellow pepper, always cut into small pieces. Then we add, following this order: tomatoes, peas, saffron dissolved in a little broth and finally fregula. Vegetable broth should be added continuously to prevent the ingredients from burning. After the cooking time of the fregula, we add the squid cut into rings. Then, after 5 minutes, we also cut the prawns, fading with the water from the mussels. At this point we add the mussels, removing the valve without a shellfish. At the end of cooking, we give a nice sprinkling of mullet bottarga and a drizzle of extra virgin olive oil.

The Church of San Michele
Sulis tower
Porta Terra Tower
More...
are you an Italian villages lover?
Join our Community
and share you experiences!