Recipe: La Michetta of the village of Dolceacqua, between love and legend

The Michetta di Dolceacqua is typical of the Ligurian village and, compared to the homonymous type of bread, seems to be linked to a love story. A simple and tasty delicacy, to go back in time and taste the present 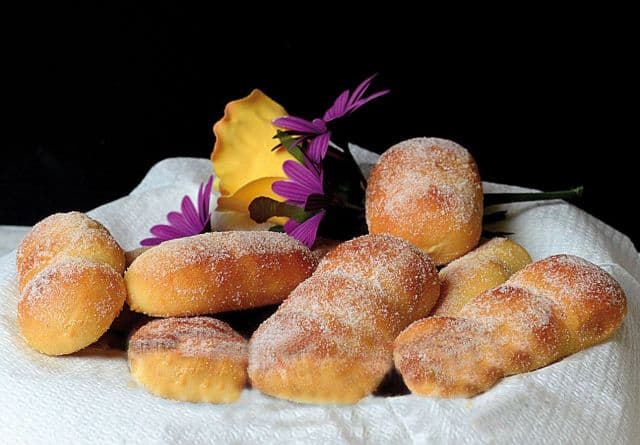 It is said that the Michette di Dolceacqua were invented by the women of the village after Lucrezia, a girl who had decided to marry Basso, the man she loved, refused to submit to the will of the local Marquis who imposed the Ius primae noctis. The girl, it is said, let herself die of hunger and thirst in the dungeons of the castle. The "promised spouse", at this point, gave the assault to the palace along with some rebels, forcing the marquis to abolish the infamous law.

The first step is to dissolve the brewer's yeast in a little warm water. While the yeast is melting, prepare a fountain with flour on a wooden shelf and add the eggs, olive oil, sugar, butter, grated lemon peel, salt and melted yeast to order. At this point you need to start kneading, pulling the dough a lot, then let rise at least an hour, then mold the michette giving the dough an elliptical shape, about four centimeters long and two wide, and place them in a pan - in which you must put a little bit of oil - distant from each other. This is to prevent it from sticking with the second leavening, which must also last one hour. When they have approximately doubled their volume, put them in the oven and let them cook until golden, then moisten the top and sprinkle with the remaining sugar.

What to see in Dolceacqua

Doria Castle
Giovanni Morscio Gallery
More...
are you an Italian villages lover?
Join our Community
and share you experiences!