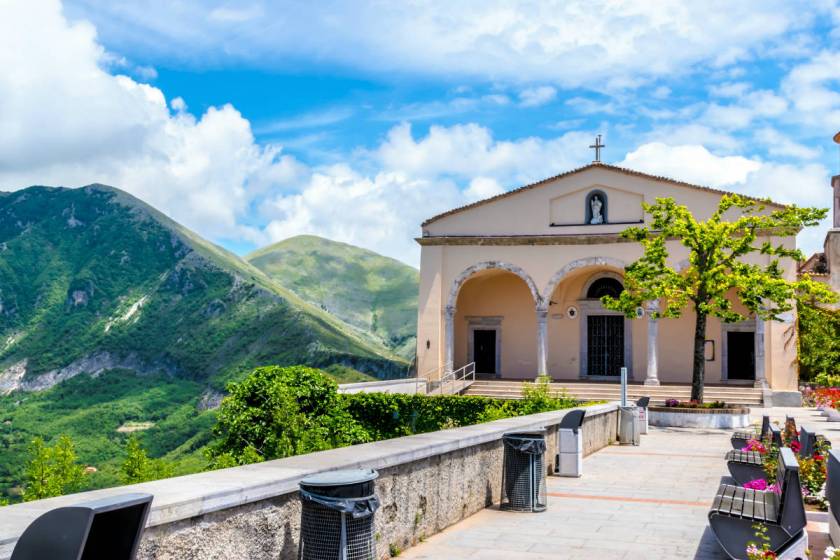 the sanctuary of San Biagio in Maratea is located at the highest point of the oldest part of the village, said Castle, and houses the relics of the Patron Saint Biagio. Tradition is built on the site of a pagan temple dedicated to Minerva. When he received the relics of the holy Armenian, became the sanctuary of Saint Biagio, chosen as patron of the city: this event is commonly dated to the year 732. Day 4 March 1562, the Pope Pius IV granted a treasure of indulgences to the church and knew what for Catholics is the miracle of the Holy manna.

The facade of the church has a portico with three arches in neoclassical style, with four columns that support a triangular gable, in which there is located a niche with a small statue of San Biagio in white marble. The church is divided in four environments: three naves and the presbytery, almost as big as the central nave.

The oldest work is present in the church is the fresco representing the Madonna with the Child, commonly called Madonna of the Pomegranate, dated to the late 15th century, located on the first pillar on the left of the nave. Follows the tabernacle in marble, dated 1519, donated to the Church by William Diodato. The work represents an ark, complete with prayerful that contemplate the SS. The Sacrament. The ancient baptismal font in stone, placed between a lateral nave and the central one, is dated to the XV-XVI century.

Via Libertà, 11, San Paolo Albanese (Potenza)
4749.35 Kilometers from
Casa del Mago
Located in the center of the medieval village of Castelmezzano, the Casa del Mago is an ancient a...

Corso Vittorio Emanuele II°, 17, Castelmezzano (Potenza)
4789.66 Kilometers from
B&B Il Sasso
A very convenient structure for any destination, without having to use the car, a stone's throw f...

Via San Nicola, 9, Sasso di Castalda (Potenza)
4772.87 Kilometers from
Katoqi - Tourist house
For a stay in the historic centre of São Paulo Albanian, Katoqui - Tourist House is ideal. A part...

Via Armando Diaz , San Paolo Albanese (Potenza)
4749.52 Kilometers from
Time Bridge Pub
A place with a warm atmosphere and a destination not to be missed during a stop in the village of...

Via Provinciale, 5, Sasso di Castalda (Potenza)
4772.83 Kilometers from
= distances as the crow flies
Farmhouse Fattoriabio
A company with a long tradition that has carried on its business in full respect of the surroundi...

Contrada San Giovanni, 85030 , San Paolo Albanese (Potenza)
4748.08 Kilometers from
= distances as the crow flies
Bridge to the Moon
The Ponte alla Luna bridge in Sasso di Castalda is a spectacular Tibetan bridge with the longest ...