On rivers, lakes and springs: the most beautiful villages on the water in Italy

The flow of water, with its musicality and scenic impact, makes these villages charming bucolic places where peace and authenticity reign. 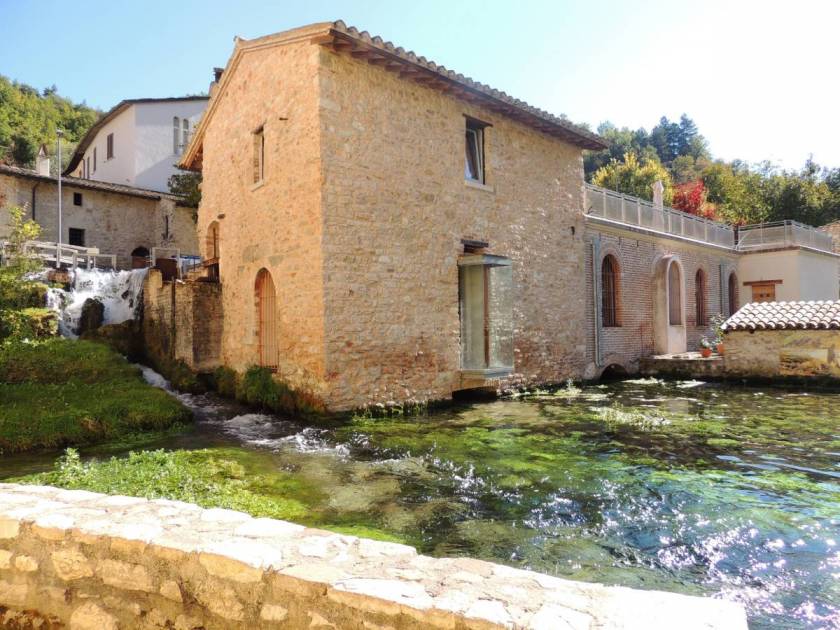 Often when people talk about villages on the water, they immediately think of those towns overlooking the sea. And yet the hinterland conceals real gems, some of which are little known and off the beaten track, created on the banks of streams, rivers, lakes or springs. The flow of water, with its musicality and scenic impact, makes these villages charming bucolic places where peace and authenticity reign.

From Rasiglia to Peschiera del Garda
Among the most beautiful and iconic villages on the water in Italy, one cannot fail to mention Rasiglia in Umbria, nicknamed 'the village of streams'. This village, located between Colfiorito and Foligno, is literally crossed by the waters of the Menotre river and those of the Capovena spring: those who walk among its old stone houses and picturesque mills will find themselves among streams, canals, waterfalls and small bridges that make this village a real postcard.
The same effect is triggered by Dolceacqua, a small Ligurian village in the heart of the Nervia Valley, which enchanted even Monet with its black stone portals and characteristic alleyways. The Impressionist artist depicted in many of his paintings, exhibited in the "Musée Marmottan Monet" in Paris, above all the ancient humpback bridge (defined by Renoir as a "jewel of lightness") that crosses the Nervia River with the Doria Castle in the background.. 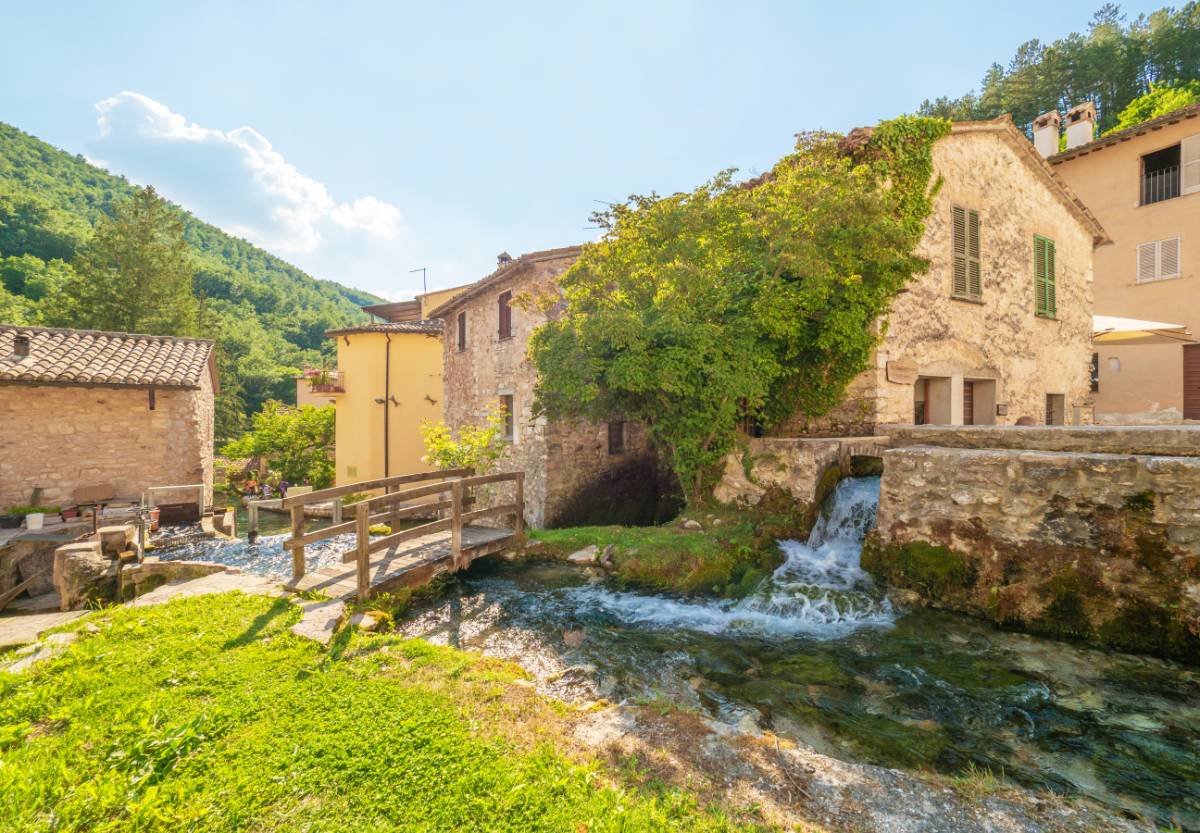 Borghetto sul Mincio, a pretty hamlet of Valeggio sul Mincio of Lombard origin, is known as the 'village of mills' and was founded on the banks of the River Mincio. The village is characterised by a medieval style and the presence of mills, with the Visconti Bridge in the background, built at the end of the 14th century by Gian Galeazzo Visconti: this construction was an integral part of a grandiose defensive system together with the Serraglio fortifications and the Scaligero Castle.
Remaining in Veneto, one of the most beautiful villages on the water is Peschiera del Garda, whose historical centre literally rises on small islands connected by many small bridges such as the Ponte Pedonale. Its Venetian fortifications are splendid and have been declared a UNESCO World Heritage Site, as well as the Fortress surrounded by bastions and gates, above all Porta Brescia with a patrol walkway offering a panoramic view of the whole of Peschiera del Garda. 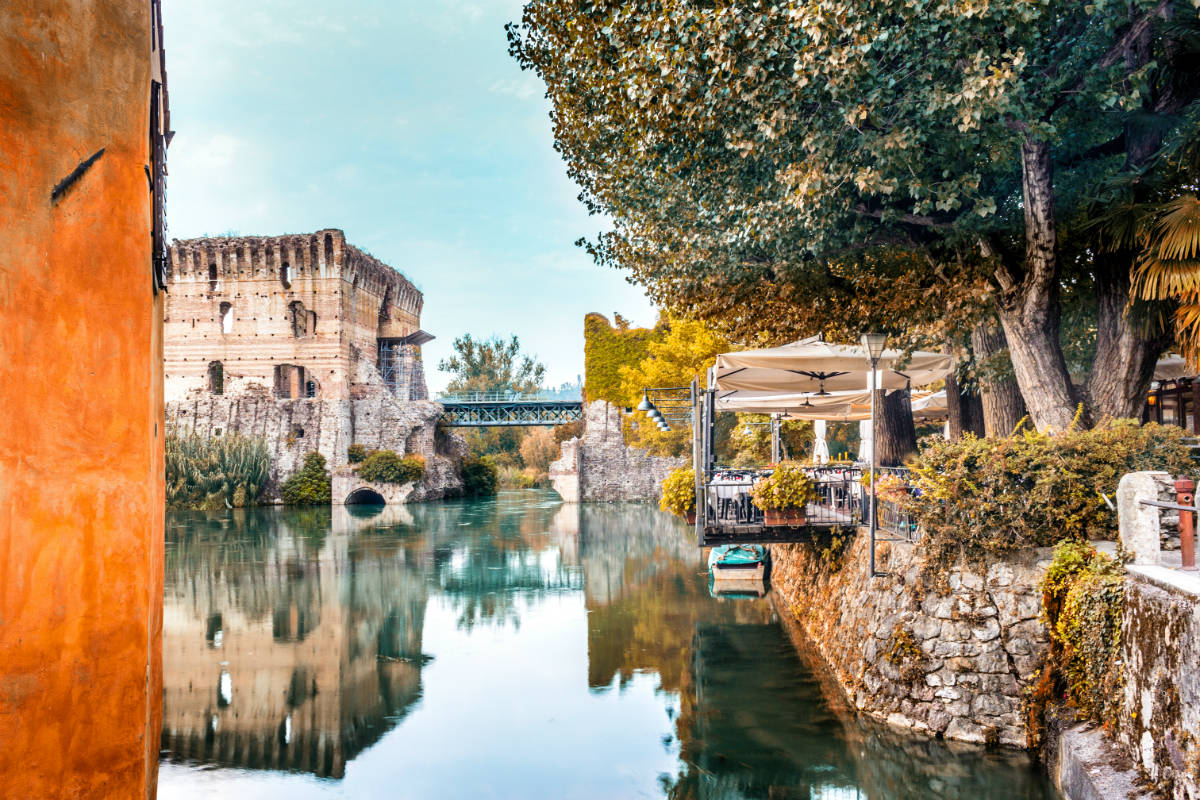 From Bagno Vignoni to the Island of Loreto
Some of Italy's most enchanting villages on the water are in Tuscany and among them is Bagno Vignoni, located right on the Via Francigena and frequented by illustrious personalities of the past such as Catherine of Siena and Lorenzo de'Medici. The village is a true pearl of the Val d'Orcia and has its main feature in Piazza delle Sorgenti, where there is a large rectangular basin where the hot thermal waters of an underground spring flow: all around it stand ancient Renaissance-style stone buildings, with a picturesque loggia.
Moving on to the province of Arezzo, we come to Loro Ciuffenna: this pretty village on the water is literally cut in two by the river Ciuffenna, on the banks of which stands one of the oldest water mills in Tuscany, presumably dating back to 1100 and still in operation today. Also enchanting is the Romanesque bridge, once part of the "Seven Bridges" circuit, and the 12th-century parish church of San Pietro. 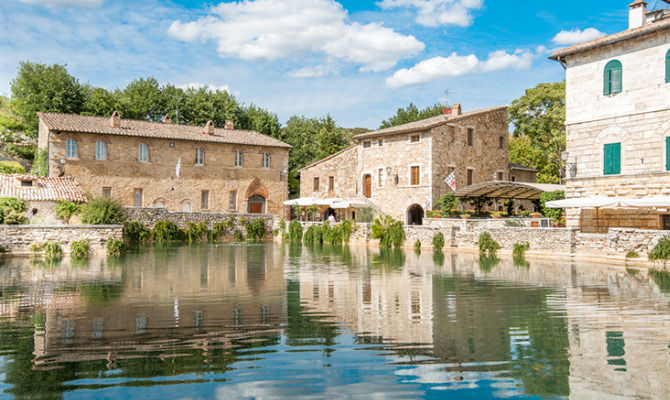 Santa Fiora is located in the Grosseto area, at the foot of Mount Amiata and is also known as the 'Land on Water'. This small town, which houses the interesting Museum of the Mercury Mines of Monte Amiata in Palazzo Cesarini Sforza, has its strong point in the Peschiera di Santa Fiora: what was once a pool used to breed trout is now the centre of a beautiful park where the waters of a fresh spring flow. Also not to be missed is the collection of Della Robbia terracotta in the splendid 13th-century Pieve delle Sante Flora e Lucilla.
Although it cannot in fact be considered a real village, one cannot fail to mention the dreamlike beauty of Isola di Loreto, part of the municipality of Monte Isola. It is a small island in the middle of Lake Iseo, which is privately owned and cannot be visited except from a distance by boat. Well, on this hermitage stands a castle worthy of the most romantic of fairy tales, built in the early 1900s by the knight Richieri. The turrets are reflected in the water of the lake, as well as the surrounding walls with battlements and the larch and conifer woods that surround the castle, offering a truly spectacular view.

Via del Bosco, 06034, Rasiglia
Maison Resola
In the heart of Borghetto – one of the most beautiful bourgs of Italy – on the banks of the river...

What to see in Borghetto sul Mincio

Visconti bridge
More...
are you an Italian villages lover?
Join our Community
and share you experiences!