Acquaviva Picena: fortified walls, the fortress and the pajarole

The village of Acquaviva Picena, famous for its fortress and for the traditional pajarole, is located in the Marche region. 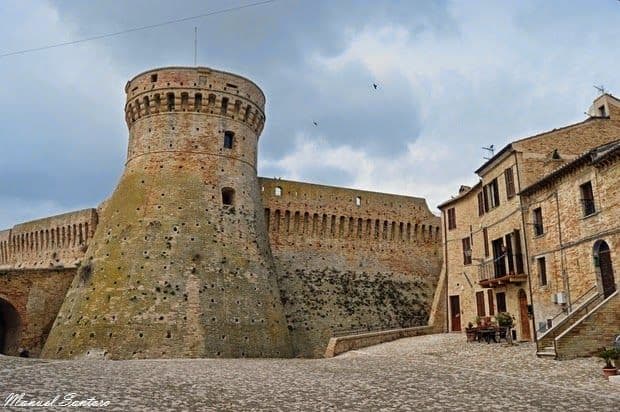 Completely surrounded by fortified walls, the village of Acquaviva Picena - in the province of Ascoli Piceno - is dominated by the famous fortress, a masterpiece of Renaissance military architecture. The first construction of the fortress dates back to the fourteenth century by the nobles of the Acquaviva family, but was then rebuilt in 1474 on a project by the architect Baccio Pontelli. It presents an irregular quadrilateral plan, which encloses a large central court with a well and with vertices reinforced by towers.

The tallest tower, the keep, cylindrical in shape, is about 22 meters high. It is one of the best preserved fortresses in the Marche region and in 1907 it was donated to the municipality of the town. The village of Acquaviva Picena, narrow and long, reveals a long alley that begins at the level of the walls, passes under several buildings and comes with a staircase on Via Marziale, the main axis of Acquaviva.

To visit is the Museum of Ancient Weapons that the fortress houses inside: a valuable collection of weapons from the fourteenth and eighteenth centuries, including some pieces from other continents. The Palio del Duca, a historical re-enactment of the wedding of Foresteria d'Acquaviva with the daughter of a nobleman of the court of Frederick II, is held annually in the large courtyard - at whose center stands a well. In addition to the fortress, there is the whole village to explore, which can be accessed by four open doors in the castle walls: a succession of significant Romanesque, Gothic and Renaissance.

Piazza San Nicolò is the barycentre of the ancient village, arranged in an elongated shape between two opposite hills, on which overlook the church of the same name, of the sixteenth century, Casa Rossi Panelli and the Civic Tower. Among the churches of the village stand out the church of San Lorenzo, containing a seventeenth-century altarpiece, the Church of San Giorgio and the church of Santa Maria delle Palme. Outside the historic center, however, stands the church of S. Francesco with the adjoining convent, one of the oldest monasteries of the Marche, attributable to the thirteenth century. Traditional activity of the village is the production of straw baskets, carried out according to a method handed down from generation to generation. These are the "pajarole", the wheat straw baskets typical of Acquaviva Picena. Glimpses of local folklore to be experienced also with a path in the Museum of "Pajarola".