Casole d'Elsa: the open-air museum in the heart of Tuscany

An ancient village that has become known as Borgo degli Artisti. Among ancient buildings and prominent monuments, the alleys of Casole d'Elsa are home to contemporary sculptures and profound and significant works of art 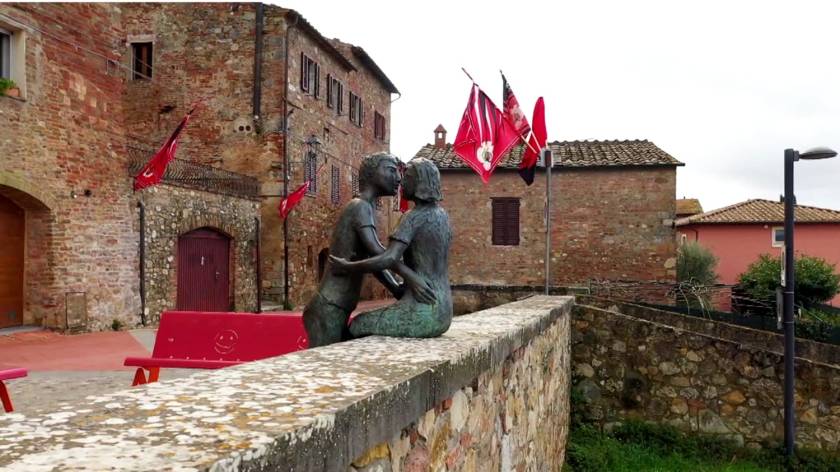 Between the provinces of Florence and Siena stretches the beautiful Val d'Elsa, one of the most iconic places in the Tuscan region. Crossed by the Via Francigena, the Val d'Elsa holds within its territory historical and artistic testimonies of immense value, often enclosed within the walls of medieval villages. San Gimignano, Certaldo and Monteriggioni are just a few of the must-visit places in Val d'Elsa. Then we cannot forget Colle Val d'Elsa, a stone's throw from which stands Casole d'Elsa, a small village with a very ancient past that today has earned the nickname Borgo degli Artisti. Indeed, strolling through the alleys of Casole d'Elsa, among ancient palaces and churches, sculptures of fine workmanship and deep and intimate meanings, also created by contemporary artists, crop up. 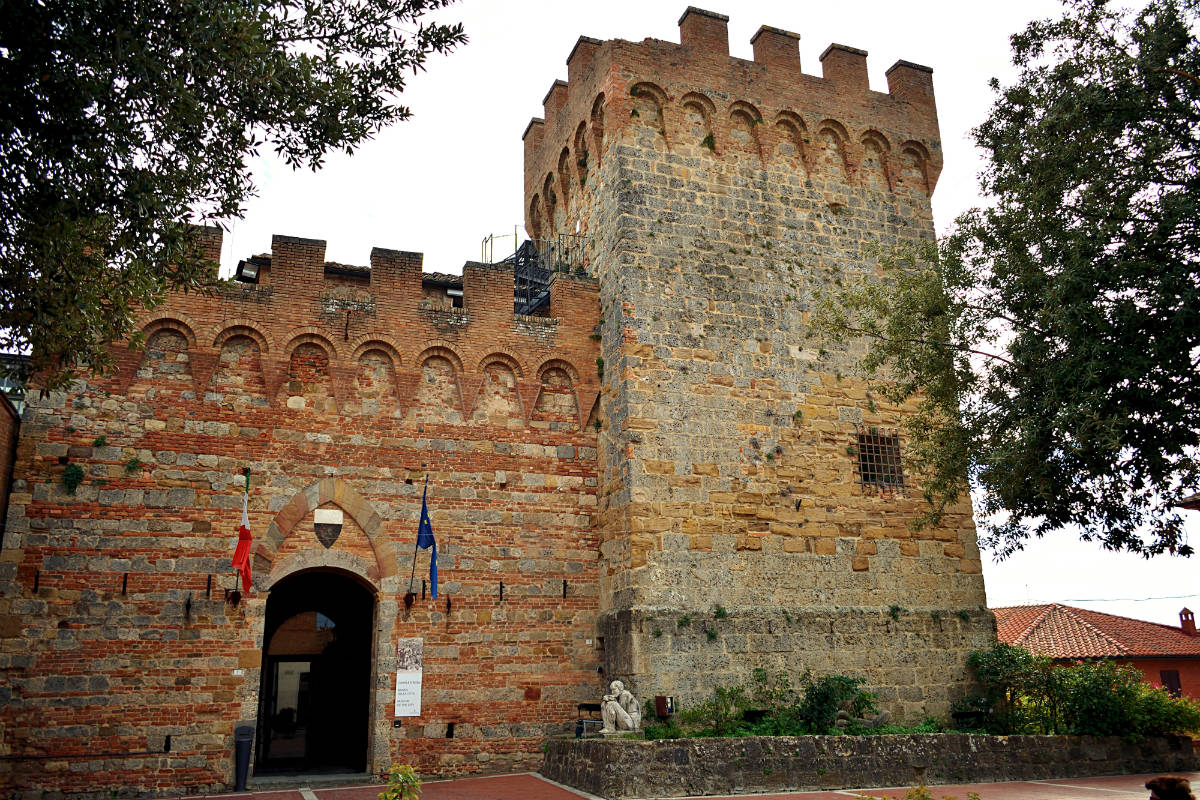 The statues of Casole d'Elsa

Casole d'Elsa is a village with clear Etruscan origins, as evidenced by the findings of tombs related to the ancient pre-Roman civilization: it passed from the hands of the Bishops of Volterra to those of Siena, which provided the town with fortifications, complete with walls in a curious ovoid shape, complete with round towers still visible today.
Those who wonder why it is nicknamed Borgo degli Artisti need do no more than walk through its marvelous narrow streets: art installations, paintings, workshops and, above all, statues dot the historic center of the village, making Casole d'Elsa a veritable open-air museum.

One encounters statues of children positioned in more or less hidden places: one depicts a boy crouching in a niche next to a colorful seedling, another sees a similar sculpture protruding from the parapet of a tall window, and yet another springs from a well. Also impressive is a sculpture of a man, who appears to be middle-aged, in the act of entering a house while softening the figure of a little girl sitting on a bench, almost inviting visitors to keep her company. 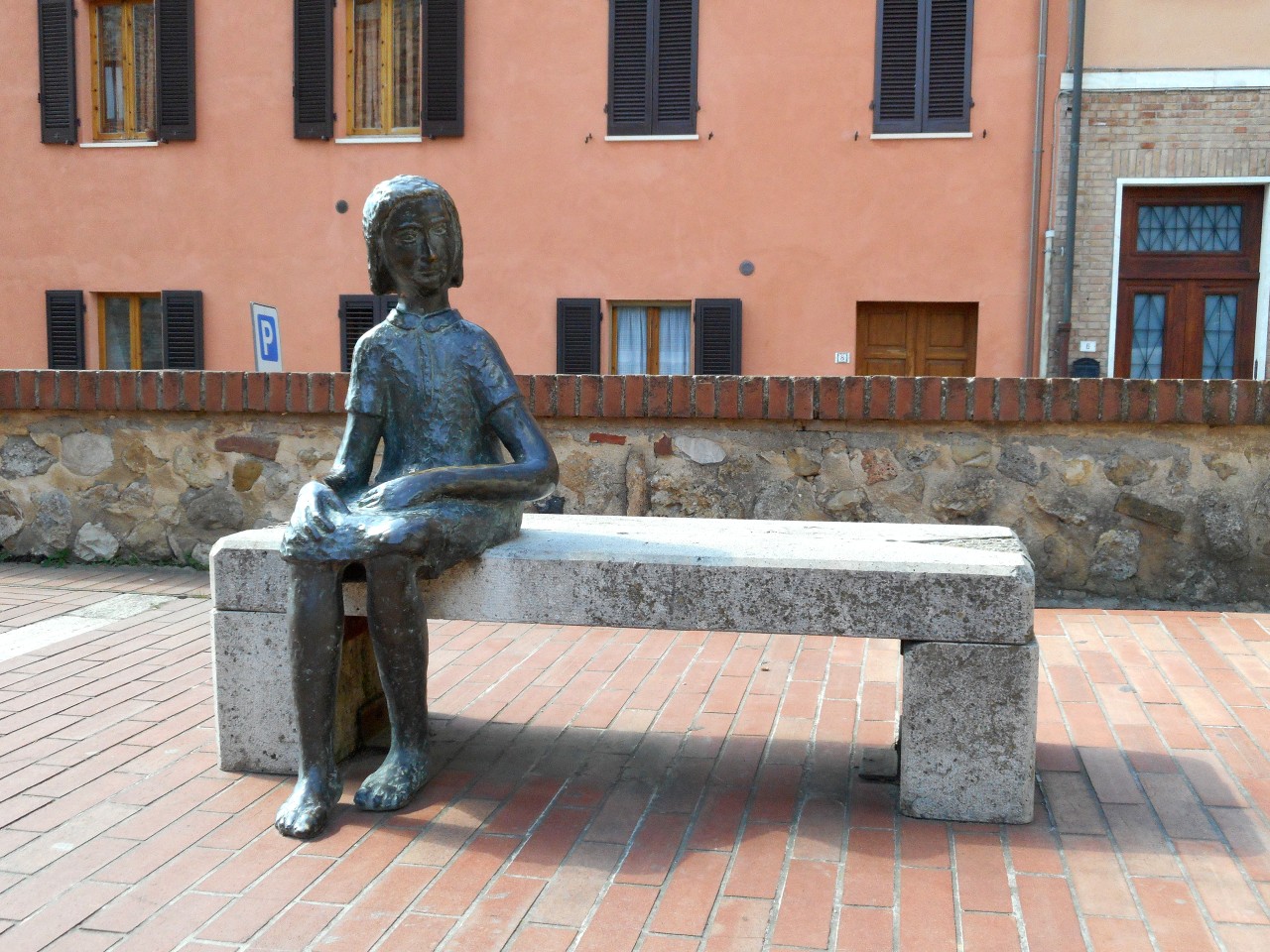 But the most famous sculptures found in Casole d'Elsa are the Two Lovers and A Sweet Eternal Embrace: the former, by Giuseppe Ciani, depicts two young people exchanging effusions with her sitting on a low wall, while the latter, by Andrea Roggi, is basically an olive tree whose trunk takes the form of a pair of lovers. 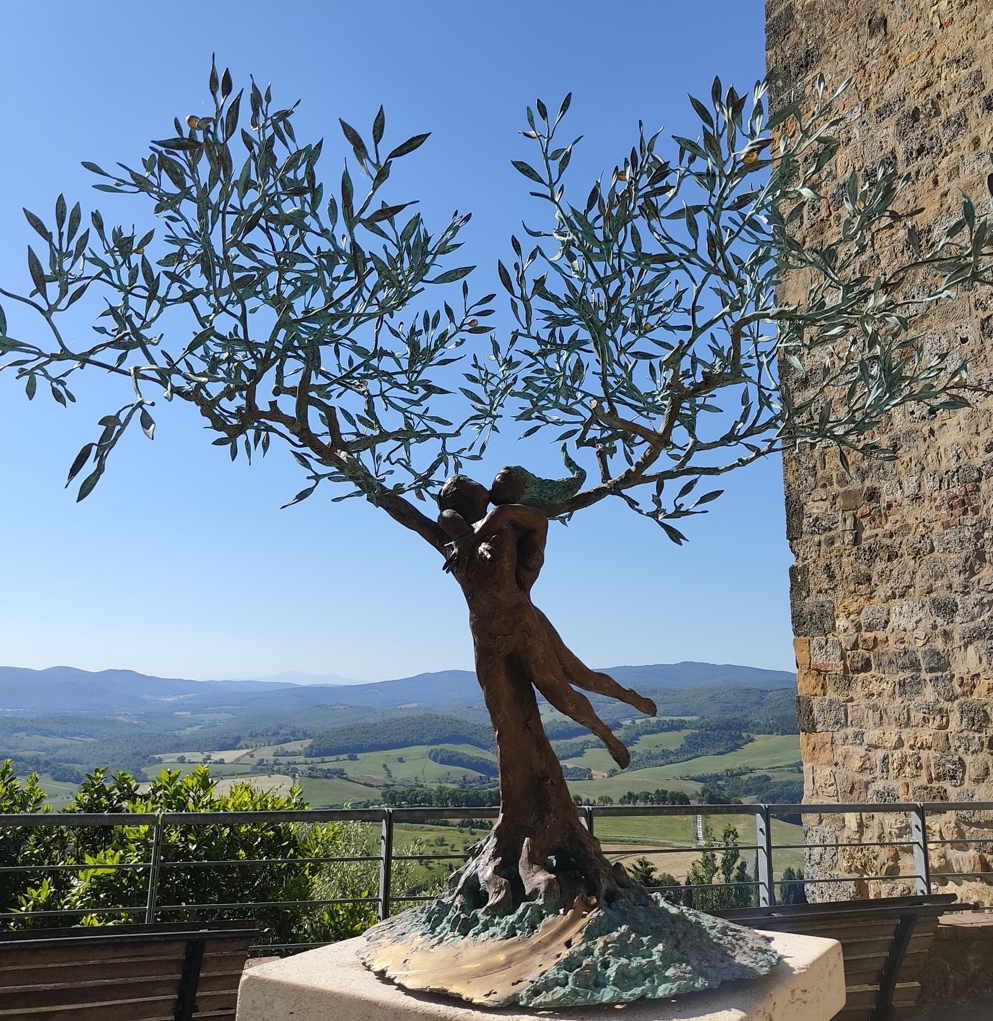 Another symbolic sculpture of Casole d'Elsa is the one created by Luca Ferrini, commissioned by Duccio Santini and dedicated to Gino Bartali: it depicts three cyclists in the act of pedaling and was created precisely on the occasion of the Giro d'Italia, which, in the year 2019, passed through the village of Casole d'Elsa. 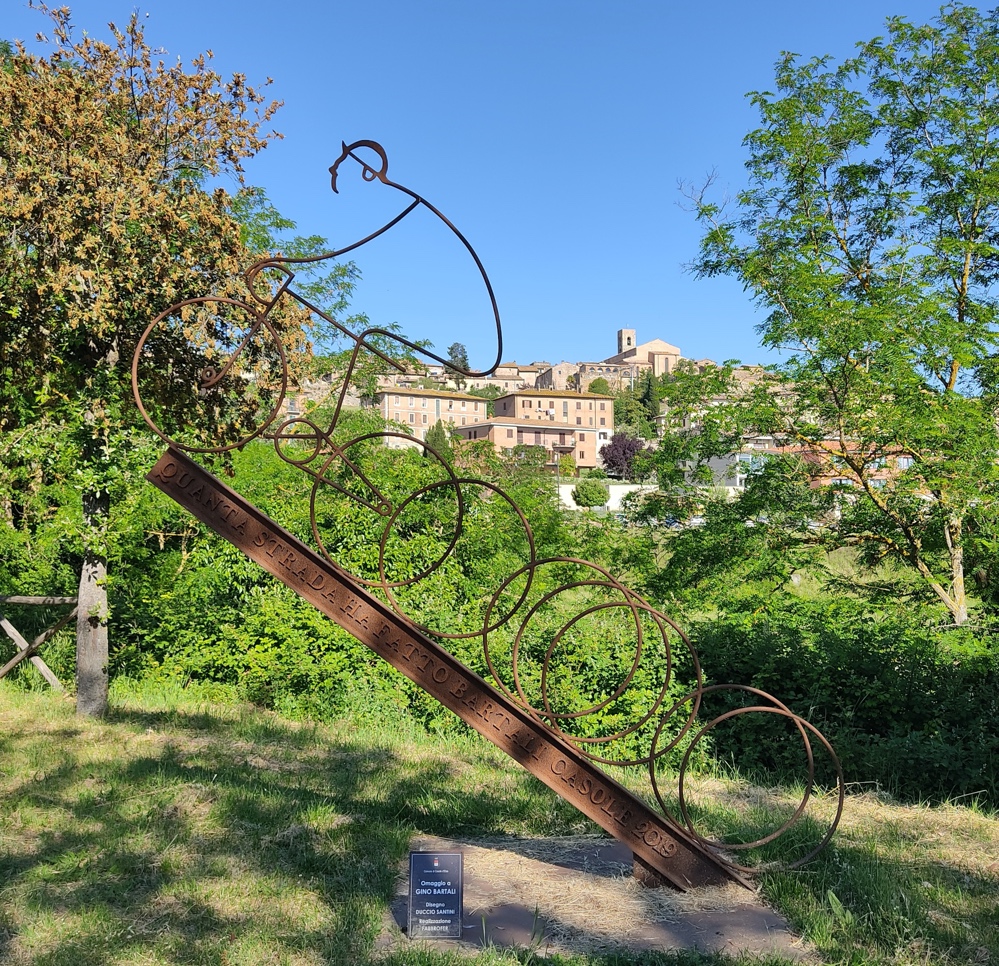 What to see in Casole d'Elsa

Casole d'Elsa is also home to some works by London-based artist Nigel Konstam, who moved to this corner of the Val d'Elsa in the 1980s: here the man opened a small atelier, inside which he worked on his marble and bronze sculptures. Konstam's, whose most beautiful work in the village is the Good Samaritan, is just one of the many artists' workshops present: those of Anna Morandi, who started her own Laboratorio Galleria d'Arte, and that of Marta Bonelli also stand out. 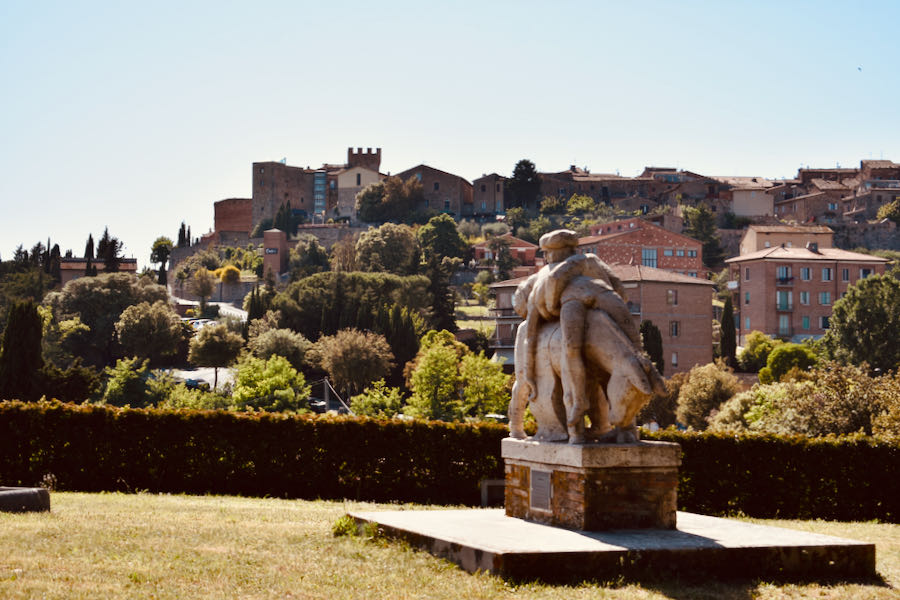 Going to Casole d'Elsa to admire these sculptures is also an opportunity to discover the village's historical heritage, starting with the 14th-century Rocca Senese: it is one of the most imposing fortresses in the area, complete with Guelph battlements and a stone keep. Today the Rocca Senese hosts exhibitions dedicated to contemporary art, attracting enthusiasts from all over the region and beyond.
Walking along Via Alessandro Casolani, one arrives in the presence of the Palazzo Pretorio, home of the Pinacoteca d'Arte Senese (Sienese Art Gallery), guardian of a series of emblems related to noble families dating from the period between the 15th and 17th centuries. 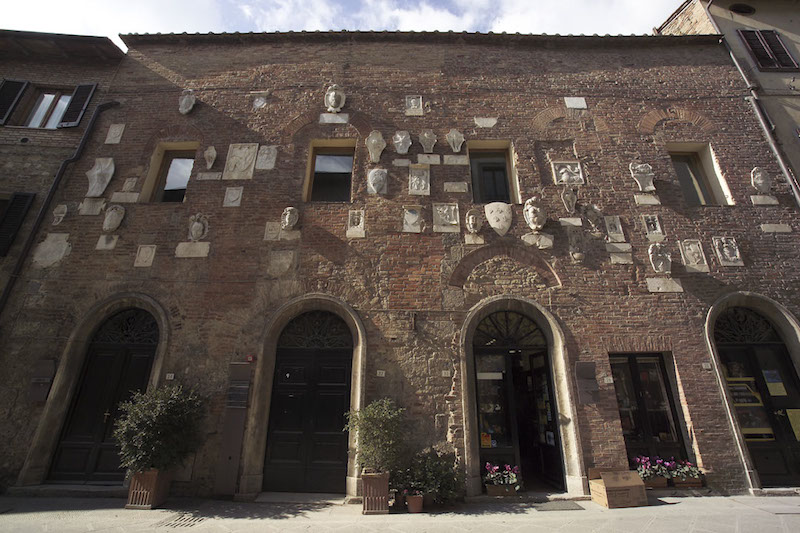 Another exhibition space to visit in Casole d'Elsa is the Museo Civico Archeologico e della Collegiata, located inside the Collegiate Church of Santa Maria Assunta, built in Gothic-Romanesque style in the 12th century. The museum houses artifacts related mainly to the Etruscan civilization and a marble head carved in the 6th B.C., probably a sign of the presence in the nearby woods of a temple.
Finally, the Church of San Niccolò, not far from the center of the village and currently used as a cemetery chapel, is also worth a visit. The church is the result of the reconstruction of the crypt of the Collegiate Church of Casole where it was located until the 13th century, when the church was transformed into a Gothic style. 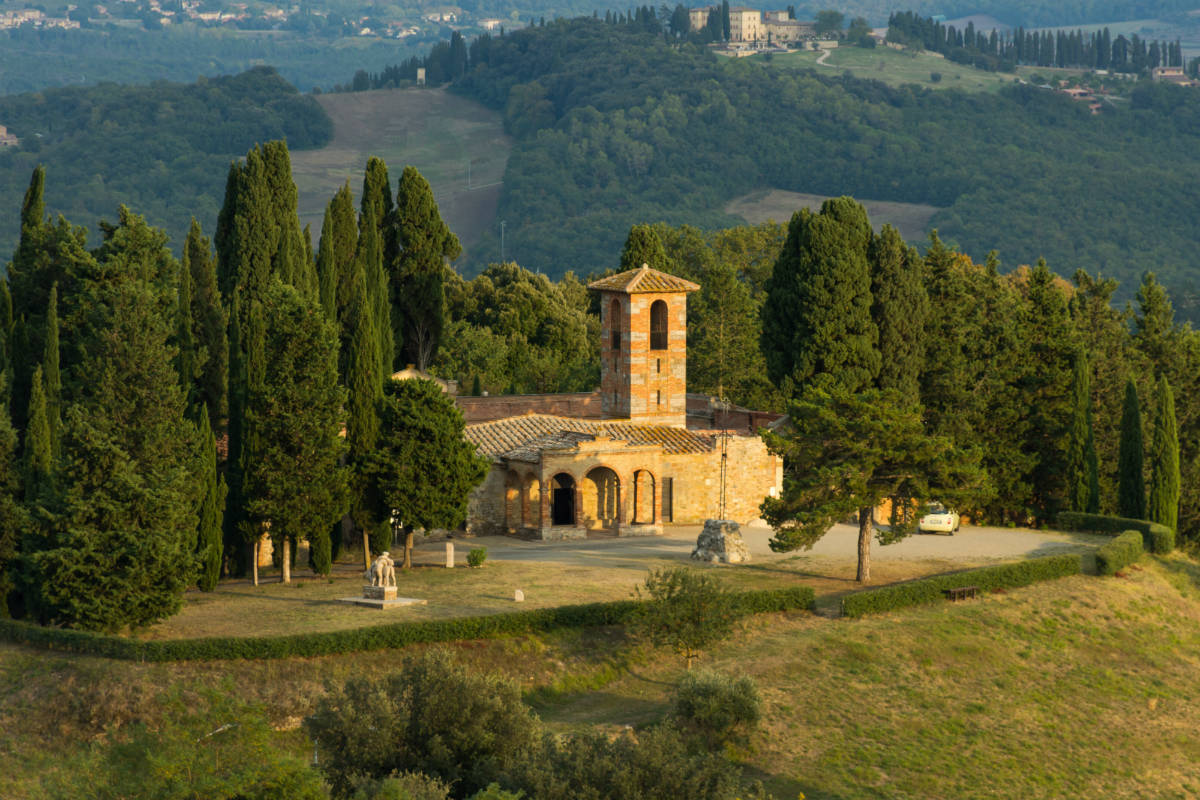 What to see in Casole d'Elsa

Rocca Senese
The collegiate church of Santa Maria Assunta
Church of Saints Andrea and Lorenzo
More...
are you an Italian villages lover?
Join our Community
and share you experiences!