Discovering 4 Easter rites in the villages of Southern Italy 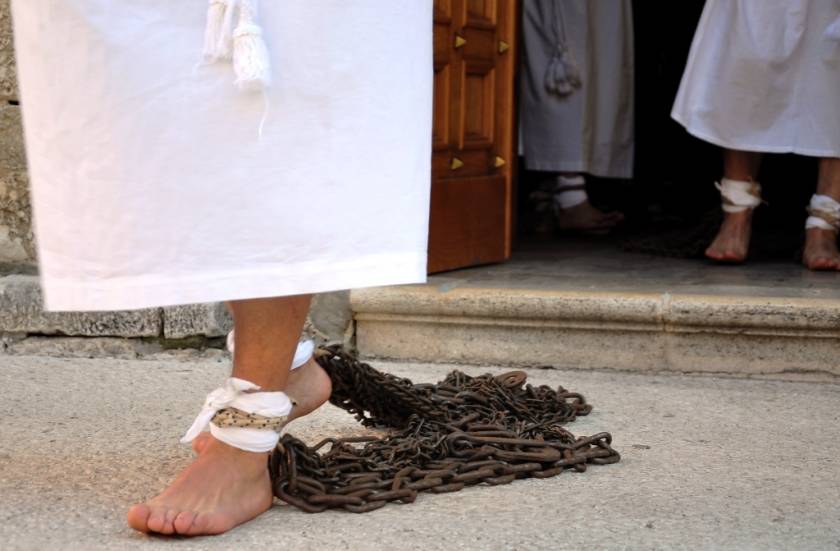 Easter rites are very popular throughout the country, especially in the villages of southern Italy and the islands, where there is a strong link with customs of Spanish origin, which date back to the periods of Iberian domination and have been handed down almost intact to the present day. Below we discover some of the most characteristic and original Easter celebrations in the villages of southern Italy.

Procida: in search of an authentic Easter
If in summer Procida is a popular destination for holidaymakers who want to discover an extraordinary sea and a village rich in history and tradition, during Holy Week the island becomes even more evocative. Local traditions have been handed down since the 16th century and include the observance of a precise ritual that begins on Holy Thursday. At the end of the day, there is a procession of twelve apostles who parade through the streets of the island, wearing a cross and a crown of thorns, along a route that winds its way through thirteen churches to the site of the Last Supper.
Here the apostles share legumes, roasted fish, lamb, unleavened bread and wine, all ingredients reminiscent of those consumed by Jesus and his apostles. The ritual continues on Good Friday, when the Procession of the Mysteries begins at dawn: for this event, statues representing the main scenes in the life of Jesus are paraded by the confraternity of the Turchini.

The Procession of the Mysteries in Montescaglioso
The Procession of the Mysteries is an event that takes place in different ways, but it has several elements in common in the various villages of southern Italy, including the splendid Montescaglioso in Basilicata, which lies within the archaeological area of the Park of the Rock Churches. Here, the event is inaugurated by the so-called mamuni, hooded figures wearing a crown of thorns and flanked along the way by the confraternities and six statues, each depicting a mystery. This town's link with the Catholic faith is very strong indeed, and it is not surprising that the Easter celebrations are one of the moments when the town comes alive with a ferment that is not only religious, but which tells of the importance of customs for the solidity of community life. 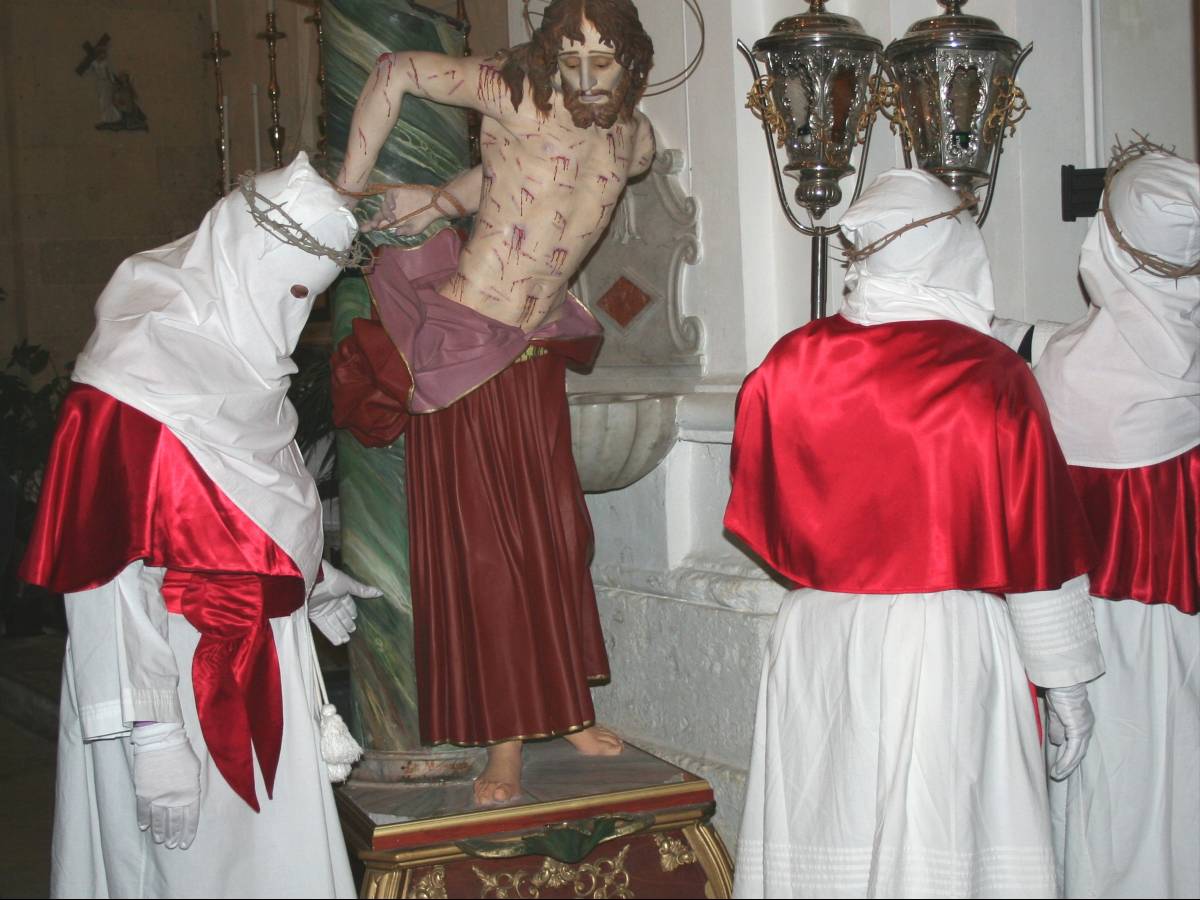 Holy Week in Troia: the Procession of the Chains
Moving on a few kilometres to the province of Foggia, we come across the beautiful town of Troia, rich in architectural beauties such as the rose window of the Cathedral and famous for hosting a very special Holy Week. The event is distinguished by the custom of Good Friday, when the Procession of the Chains is held, a pilgrimage undertaken by five penitents to visit all the churches where adoration takes place. The men are dressed only in a white habit and carry a heavy wooden cross on their shoulders, while they are hindered by chains tied to their feet, symbolising the labours and sacrifice of Christ. 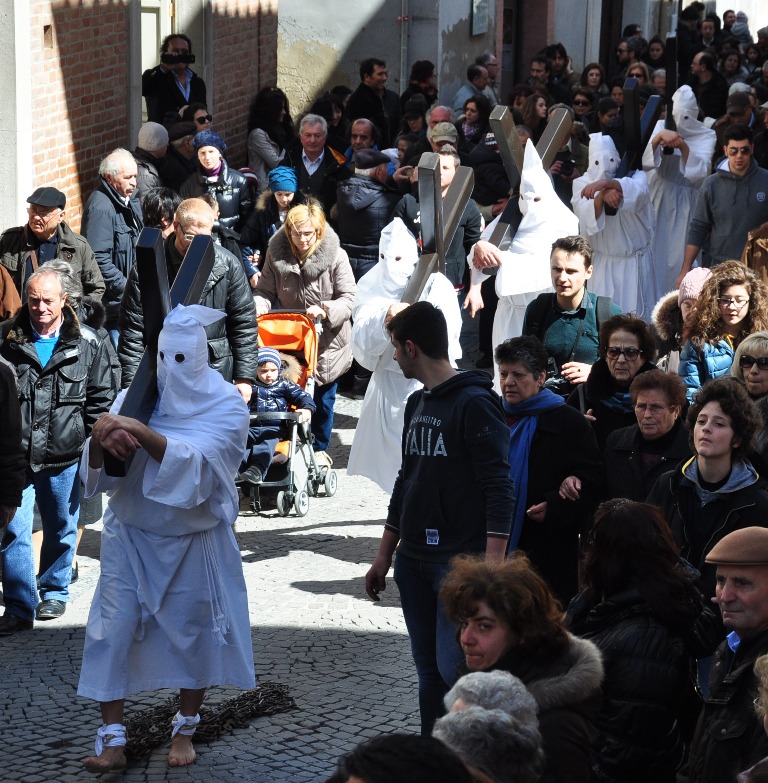 Alghero: a week of holy "festivities
In the seaside town also known as 'little Barcelona', it is not surprising that the Easter tradition is reminiscent of Spanish customs. Here, the Easter rites involve the entire town: as is often the case for the "Semana Santa" celebrated on the Iberian peninsula, the faithful men gather to pay homage to a wooden statue of Christ, in front of which they stop to pray.
The women dress in black and visit the statue with the aim of asking for grace. When Good Friday arrives, it is time for the ritual of the unmasking of the statue representing Christ, which is then placed from its cross inside a specially prepared cradle.
The real climax of the week coincides with the start of the candlelight procession: the parade starts from the Chiesa della Misericordia and winds its way through almost the whole of Alghero, covering the streets with suggestive red reflections due to the colour of the special cards with which the candles are wrapped. Participants pay particular attention to advancing following an ancient dance step, which imitates the act of cradling a child.
The various religious brotherhoods take part in the same event, distinguishing themselves from the crowd by their typical pointed hats. The great festivities for Holy Week end on Easter Sunday, when the Risen Christ meets the Madonna: this is the moment when penitence gives way to joy and celebration of the Resurrection, which the people of Alghero celebrate in front of a firework display and flights of doves, the traditional Easter symbol. 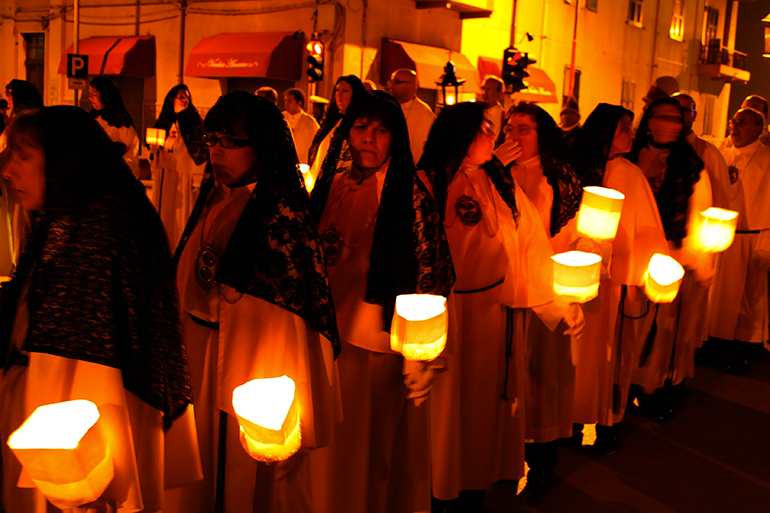 Viale I Maggio, Alghero
San Michele Boutique Hotel
The San Michele Hotel is located in the center of the picturesque fishing village of Marina Corri...

What to see in Troia

Avalos Palace, the Civic Museum and the ghost of the Marquis
Cathedral of Santa Maria Assunta and the Museum of the Treasure of the Cathedral of Troy
Church of San Basilio Magno
More...
are you an Italian villages lover?
Join our Community
and share you experiences!

In Basilicata, discovering the Lucanian village...
Polignano a Mare: a destination to discover all...
Compiano, the magical village of Val di Taro
More...