Share
From afar Civita di Bagnoregio appears as a hermitage suspended between heaven and earth: the village rises in the province of Viterbo on a tuff promontory which, from a height of about 443 meters, rises between the ravines of the Rio Torbido and the Rio Chiaro, in a spectacular setting that makes Civita di Bagnoregio one of the most beautiful villages in Italy.

A look at Civita 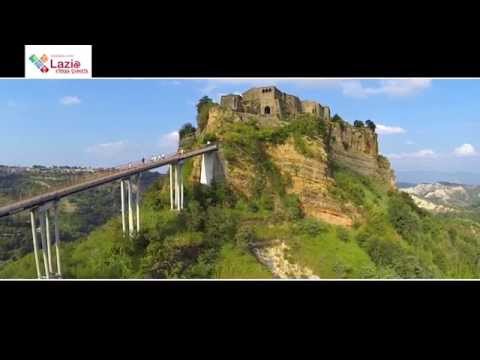 The numerous Etruscan tombs found on the site suggest that the area where Civita di Bagnoregio stands today has been inhabited since the Etruscan era. The area was crossed by waterways and was close to important communication routes such as the one that connected the nearby Lake Bolsena to the Tiber: soon the Romans, then the Goths and the Lombards, arrived, until the Frankish domination that led to the lordship of many noble families such as the Monaldeschi.
In the thirteenth century Civita di Bagnoregio prospered as a free municipality until the plague of 1221 decimated its population. At the behest of Pope Alexander VI Civita di Bagnoregio ended up under the power of the Apostolic Delegation of nearby Viterbo.
The two earthquakes of 1695 and 1794 jeopardized the existence of the town and, amid landslides and landslides, the population abandoned it in favor of Rota.
After being the scene of the historic Battle of Bagnorea between the Pope's soldiers and the Garibaldi soldiers, Civita di Bagnoregio became part of the kingdom of Italy in 1870.
An inexorable state of abandonment followed until tourism revived the fortunes of this splendid town: you must know that some scenes of films such as "The two colonels" with Totò and "The enchanted city" by the great Japanese director were shot here Hayao Miyasaki.

Entrance to the village

You will have certainly heard of Civita di Bagnoregio as "the dying city". The reason is that the layer of friable clay present at the base of the tuff cliff, over the centuries, is constantly eroded by the waters of the streams, the wind and the rains, endangering the stability of the village. The same spectacular Valle dei Calanchi that surrounds it has been shaped thanks to erosions: the badlands, specific to the place that will appear to you like waves in an arid sea of ​​stone, are clay ridges that can reach great heights and important depressions.
To reach Civita di Bagnoregio you have to cross a pedestrianized concrete bridge, at the end of which you will find yourself in front of the Porta di Santa Maria. This masonry entrance is dominated by a beautiful loggia and is decorated on the sides by two small lions with human heads in the jaws, in memory of the expulsion from the village of the hated Monaldeschi in 1494. With a little attention you will be able to see some engraved cross, perhaps left by pilgrims returning from the Holy Land or by some Templar.

Once through the Porta di Santa Maria you will find yourself in a town where time has stopped, where the late medieval style is almost intact. You will walk in silence, under the gaze of some sly cat, among artisan shops, elegant peperino portals, ivy-clad houses and Renaissance buildings decorated with profferli and mullioned windows. Among the latter stands the Palazzo degli Alemanni, which is also home to the "Geological and Landslide Museum" where you can learn more about the geological history of the village.
The heart of Civita di Bagnoregio is Piazza San Donato: do not expect a paved space because here you will find only red soil, just as it was in the distant fifteenth century. In the square there is the old Cathedral of San Donato, whose Renaissance facade of the '500 betrays the medieval origin of the church. Inside, in addition to a fine fresco from the Perugino school, there is a wooden crucifix which, according to Christian tradition, in 1499 would have communicated to a faithful the end of the plague. Every Good Friday he is carried in a procession between appearances in period costumes and solemn songs to the Annunziata Church of Bagnoregio, and then returns to Civita by midnight to preserve it from earthquakes and landslides.
If you reach Civita di Bagnoregio in the first days of June you will witness the ancient Palio della Tonna which takes place right in Piazza San Donato, among jockeys on the back of their donkeys who challenge each other by turning in circles to win the Palio.

Between caves and good food

Wandering through the alleys of Civita di Bagnoregio there will be many belvedere that you will meet, from which you can enjoy spectacular views over the Valle dei Calanchi. Looking closely, you will not struggle to see many underground caves excavated in Etruscan times: reaching the "Museum of Ancient Civitas" you will find yourself wandering in hypogean environments where peasant life took place in the 30s. Here are preserved Etruscan and Roman finds, but also oil mills, plows, spades, scales and other utensils of daily life, as well as dining rooms and bedrooms faithfully reproduced in some caves.
Much more mystical is the Grotta di San Bonaventura where the little Giovanni di Fidanza is healed by San Francesco d'Assisi who, after the miracle, pronounces the words "Bona Ventura": for this reason the young man, when he becomes a Franciscan, adopted the name of Bonaventura.
Before leaving Civita di Bagnoregio stop in one of the characteristic restaurants of the village and enjoy the typical cuisine of the ter

Piazza Sant'Agnese, 16 - 01030, Vitorchiano (Viterbo)
18.68 Kilometers from Civita di Bagnoregio
Monsters Park
The Monsters Park is a monumental complex that is located at Bomarzo, in Lazio.

Via Borgo Cavour, 45 - 01030, Vitorchiano (Viterbo)
19.17 Kilometers from Civita di Bagnoregio
House of Santa Rosa
The house of Santa Rosa is the place where the saint would perform miracles.

Via Casa di Santa Rosa - 01100, Vitorchiano (Viterbo)
19.60 Kilometers from Civita di Bagnoregio
City Museum
The Museum of Acquapendente is located on the ancient urban route of the Via Francigena, nel Lazi...

Via Roma, 134-136, Acquapendente (Viterbo)
23.70 Kilometers from Civita di Bagnoregio
Monsters Park
The Monsters Park is a monumental complex that is located at Bomarzo, in Lazio.

SP20, Bomarzo (Viterbo)
18.93 Kilometers from Civita di Bagnoregio
Flower Museum
The Flower Museum is located near the village of Acquapendente, in Lazio.

L’Arco del Gusto
Tastings and products typical of the area of the Tuscia.

The villages in the hills
Italy is rich in villages, those small urban agglomerations with an intimate dimension and rarefied atmosphere that so enchant anyone lucky enough to set foot there: they are small jewels, born in a very distant past and developed around fortified citadels that still show all their secular grandeur.Among the most enchanting Italian landscapes there are the hilly ones, where hillocks, vineyards, castles and above all picturesque villages altern...
Continue
The 10 most beautiful villages set in the rock
The Italian territory is rich in wonderful landscapes. Some of the places able to combine history and charm are the villages. From north to south, the villages are numerous and scattered in every region. They can be found in the most varied places: from islands to inland areas, from lakes to mountains, from hidden bays to jagged cliffs. But each of them is capable of making anyone who takes the time to visit them fall in love. Among the most c...
Continue
Fusion between architecture and nature: the most fascinating stone villages in Italy
Embedded in the most solid natural element, stone villages are among the most spectacular building agglomerates in the whole of the Bel Paese. Let's set off to discover some of the best, to mark for an upcoming vacation or trip out of town. From Piedmont to Liguria: Chianale and Apricale The beautiful village of Chianale, nestled in an area on the border between Piedmont and France, is located in the upper Varaita Valley and is surrounded by ...
Continue
The 10 most beautiful alleys of the Italian villages
Italy is a land full of wonders and places to discover. Tourists from all over the world come to visit the villages of the country to discover characteristic streets and alleys that offer unique views of the world, characterized by small and narrow picturesque cobbled and stone streets that often climb to the heights and panoramic places overlooking breathtaking views. Getting lost in the alleys and streets of Italian villages is one of the be...
Continue
5 among the most beautiful and characteristic italian villages set in the rock
It opens another view of the hidden wonders of the Mediterranean boot, chosen for you five of the most beautiful villages in Italy set in the rock, places where nature and architecture coexist in perfect balance giving life to glimpses and landscapes unique in the world. Our journey begins with Sorano, a village with unique and enchanting atmospheres, in the province of Grosseto, in the Tuscan Maremma. Also called "The Matera of Tuscany", t...
Continue
Italian villages in the movies, when cinema is shot in the villages - Episode 2
We continue our journey to discover the villages that served as the scenography for big (and small) masterpieces of both national and international filmmaking. The Italian villages offer suggestive locations that have been the background of several adventures, the only limit is the imagination and creativity of directors, screenwriters and writers, who masterfully bring Italian beauty to the big screen. After the success of the
Continue
Italian villages in movies, when cinema is set inside the villages – Episode 1
Italian villages are natural sceneries for arthouse masterpieces. From north to south, here are some location used for famous movies or by great directors, from Borghetto (Luchino Visconti) to Sabbioneta (Bernardo Bertoulucci), from Savoca (Francis F. Coppola) to Tremosine for a James Bond episode.
Continue
Summer 2020, Travel in Italy: the villages, ideal destinations to visit in the post-coronavirus
From today, May 4, the restrictive measures imposed by the government during the lockdown period will begin to be eased. Many regions, for example, will allow you to move within your territory to walk to the sea or to the mountains. These will be the first steps for a gradual recovery to normal, while respecting the distance and the use of masks to block the spread of the covid 19. In the meantime, less than two months are left at the beginning of summer 2020. "Travel in Italy" it is the slogan that recurs most often in the media, as well...
Continue
The Director Alessandro Genovesi chose Civita di Bagnoregio for his new film 'Matrimonio Italiano'
On 1st of March will be out the new film by Alessandro Genovesi 'Matrimonio Italiano', an italian comedy that surely will be sparkling and profound at the same time. Inspired by the Broadway musical 'My big gay italian wedding' by the Italian-American Anthony J. Wilkinson, the film also takes inspiration from what's happened in the Italian society with the recent law on civil unions. The new comedy by Genovesi in fact tells the story of the love between Paolo (Salvatore Esposito, Gomorra) and Antonio (Cristian...
Continue