Share
In the place where the Sicilian city Halyciae once stood, stands the village of Salemi, one of the most secluded and interesting from an artistic and monumental point of view in the province of Trapani. In the historical center there are ancient palaces, built in the local Campanella stone, and churches, the oldest of which is the early Christian basilica of San Miceli, the medieval castle and the Jewish quarter of Rabato.

A look at Salemi 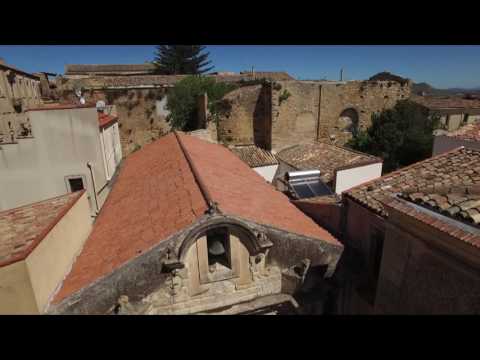 Feast of San Biagio in Salemi

The Arab-medieval village of Salemi is located in the Belice Valley, Sicily. Located between the hills cultivated with vineyards and olive groves, it is surrounded by the castle from whose curved terrace of the circular tower it is possible to see a vast panorama of western Sicily to the sea. Located on the site of the ancient elite town of Halyciae, it was the scene of the ongoing wars between Selinunte and Segesta. In 272 BC, conquered by the Romans, it was declared a free city and free of voluntary submissions. In the fifth century, like the rest of Sicily, first fell under the rule of the Vandals, then under that of the Goths. In 535, it was subjugated by Byzantine Belisario, General of Justinian. In 827, he fell under the aegis of the Arabs that made it prosper and with which the name Salemi originated. From the agricultural point of view, the Arabs introduced many new cultivations in the surrounding countryside: oranges, lemons, peaches, apricots, asparagus, artichokes, cotton, aubergines and spices such as saffron, carnation and cinnamon. In 1077, and then in the Norman age, the town was under considerable development. During this time the Castle was built. In 1194, the dominions of the Swabians followed. In 1266, at the death of Frederick II, the Angioino period began, which however reduced the population in misery. In 1441, and precisely on 11 December, a confederation of Salemi, Trapani, Mazara, Monte San Giuliano and the Barons of Castelvetrano and Partanna formed a confederation, which undertook defense, supporting the expenses of the Queen Bianca and the Real home of Aragon. Salemi was therefore most fortified and guarded during the Turkish invasions. In 1735, with the coronation of Charles III of Spain to King of Sicily, which took place on 30 June, Bourbon domination began.

In 1860 Giuseppe Garibaldi, after joining Marsala, headed for Salemi where, on May 14, he was received with great enthusiasm from the people. Thanks to the help of Baron Giuseppe Triolo of Sant'Anna di Alcamo, who had joined him with a band of little ones, took over the rule in the name of Vittorio Emanuele II, the future king of Italy. In the Town Hall Square, called "Dictatorship" on the occasion of the event, a tombstone remembers that on that date Giuseppe Garibaldi arrived in Salemi declaring himself a dictator of the Kingdom of the Two Sicilies: "Sicilians! I guided you a host of prodigies to the heroic scream of Sicily, the rest of the Lombard battles. We are with you! We ask nothing but the liberation of our land. All united, the work will be easy and short. Then I dare! " On that occasion, the Hero of the Two Worlds herself, on its own, hoisted the flag of the Norman-Svevo Castle, the flag of the Tricolor, symbolically proclaiming Salemi Capital of Italy, a title that kept for a day.

In 1968, on the night between 14 and 15 January, the city was severely struck by a severe earthquake that roared to many common plains in the Belice Valley. Following the seismic event, the Salemite political authorities and the architects called to design and redesign the structure of the commune opted for the reconstruction of the country in a new style. For these reasons, urban development has led to a decentralization towards the downstream side of the hill called "New Country", and now represents, together with the Cappuccini, one of the most densely populated areas and districts. The old town is characterized by an arabeggiante plant scheme with very articulated blind alleyways, leading to increasingly segregated courtyards and particularly steep stairs.

They are definitely worth a visit to the Norman Castle, the Ritual Baptism Museum and the Salemi Civic Museums, which include the sections: Sacred, Archaeological, Risorgimento, Mafia Museum, Stone Campanedda Museum. Inside the museum there is an 18th century chapel that faithfully reproduces the Casa Santa di Loreto "Casa della Madonna". Among the most flourishing typical traditions, we need to remember the weaving of rugs on the frame, the embroidery and the processing of the stone, made from the quarries of the territory and used for the decorations of the houses and carved by local artisans.

U Giardinieri
U
Giardinieri is a Salemite mask. He wears the Burgisi costume, namely, zuava trousers, jacket, jacket, brown velvet, black boots, a white shirt and a red handkerchief. In the head a hat decorated with multicolored crimson paper flowers from which at the back are always fringed with multicolored paper, behind the back contains a container called "sachina". Through an extensible tool on carnival days, tangerine garden products are offered to cute girls or cucumbers and carrots to those unpleasant. Nothing is known about its origins. other Sicilian masks that used the "Ladder" were the "u scalittaru" palermitano and "a vecchia" of San Fratello.

Village of Salemi
Municipality of Salemi

Largo Castello, 91016, Erice (Trapani)
30.44 Kilometers from Salemi
Pepoli tower
The Torretta Pepoli, one of the symbolic monuments of Erice, was built in 1881 by the Count Pepol...

91016, Erice (Trapani)
30.55 Kilometers from Salemi
Spanish quarter
The Spanish Quarter is an ancient fortress of Erice from the first half of the 17th century that ...

Piazza Plebiscito, 7, Mazara del Vallo (Trapani)
26.23 Kilometers from Salemi
Genovese Cave
The Grotta del Genovese is located on the island of Levanzo, the smallest of the Aeolian islands.

Via Calvario, 27, Isola di Levanzo, Favignana (Trapani)
46.89 Kilometers from Salemi
San Giuliano church
The church of San Giuliano is one of the oldest places of worship in Erice, dedicated to San Giul...