Share
Just 55km from Syracuse there is one of the most picturesque villages in Sicily: Marzamemi, a small hamlet of Pachino. To those who set foot there for the first time it seems to have been catapulted back in time, when life revolved essentially around fishing and tourism, which today supports the local economy, was just a utopia. Crystal clear sea, beaches and history make the village a place to discover and live at a slow pace.

A look at Marzamemi 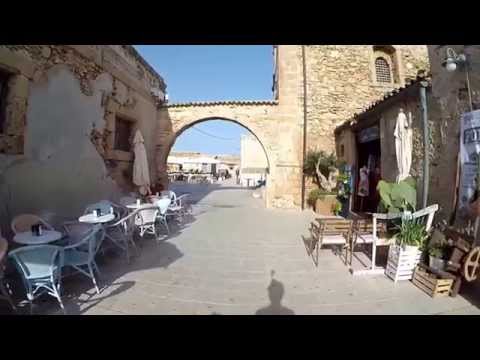 La Befana comes from the sea

The Tonnara and the Villadorata

The origin of the name Marzamemi, marsà al-ḥamāma or Baia delle Tortore, reveals the presence in the territory of the Arabs who built a tuna fishery here in 1000 AD. Another hypothesis wants the origin of the name from Marza and Memi, or small port.
The fishing village of Marzamemi, in the province of Syracuse, was founded in the 18th century after the Villadorata family bought the Arabic tuna trap in 1630, which was suitably enlarged: with the Villadorata family the fishermen's houses, the church and the family residence were then built.
The tuna fishery, where the tuna in oil and salted tuna was produced, remained in activity until 1969: the skiers, the long boats used by the tuna fishermen, were put back in the Loggia degli Scieri, a large hall with tuff arches that today hosts dinners, events and weddings.
Next to the Tonnara stands the Palace of the Prince of Villadorata built in sandstone and overlooking the bright Piazza Regina Margherita: the baroque building dates back to 1725 and on the facade you can admire stone gutters and the Villadorata coat of arms on the portal. Entering the Palace and passing a staircase from the tree-lined courtyard, you can visit the prince's room, with its small balcony overlooking the tuna fish.

From Piazza Regina Margherita to Balata

In addition to the Prince's Palace, two churches overlook the airy Piazza Regina Margherita: the oldest is the Church of San Francesco da Paola dating back to 1752 and adjacent to the tuna fishery, while the other dedicated to the same saint (also the patron saint of Marzamemi celebrated every August with an evocative sea festival with regattas and cuccagna at sea) dates back to 1950, has a wooden door and a beautiful rose window in Romanesque style.
The square is literally surrounded by the old fishermen's houses, now requalified and turned into craft shops, ice-cream parlours and characteristic little restaurants where you can taste the typical products of the area, which are true local peculiarities: don't miss dishes based on Pachino ICG cherry tomatoes, smoked swordfish and obviously bluefin tuna, including mosciame, ventresca and bottarga.
In the evening the square lights up with a thousand lights that cross it from one end to the other and there is no better place to stop and enjoy the simple but authentic atmosphere of the place.
From Piazza Regina Margherita there are a series of picturesque alleys, one more enchanting than the other: walking along Vicolo Villadorata you arrive directly at the small port of Balata, certainly the most characteristic of the other in Porto Fossa, with its limestone paving.
From Balata, in addition to the peeling boats of the fishermen who still dance back and forth in their fishing trips, you can admire the Isola Piccola, also known as Isolotto Brancati after the doctor of Pachino who built his villa there, hosting among others the essayist and writer Vitaliano Brancati.

From the beaches of Marzamemei to the Vendicari Reserve

The beaches surrounding Marzamemi are many and suited to the needs of every type of tourist, from the largest and liveliest beach of San Lorenzo to that of Spinazza, perfect for families and snorkelers alike.
The beach of Isola delle Correnti, 17km away from Marzamemi, is very fascinating: the name suggests just the spectacle that can be seen in this place, with the sea currents of the Mediterranean and the Ionian Sea that meet.
Then there are the wildest and most uncontaminated beaches, located within the Vendicari Reserve between Marzamemi and Noto, just 20km away: at the Tonnara beach you can swim among the remains of the Byzantine civilization while at the Eloro beach, located at the edge of the mouth of the river Tellaro, there are the remains of an ancient Roman domus.
A holiday in Marzamemi cannot fail to include a visit to the beautiful "Riserva Naturale Orientata Oasi Faunistica di Vendicari" which, thanks to the presence of as many as four swamps, is a veritable sanctuary for migratory birds: birdwatchers can admire waders, herons, cormorants, knight of Italy, storks and graceful flamingos.
In addition to these wetlands, among which only the Small Marsh never dries up, the Vendicari Oasis also consists of beaches as previously mentioned, salt pans, long coastal dunes, fragrant Mediterranean scrub and lotomies: the latter are stone quarries made by man around the fifth century to extract the materials necessary for the construction of monuments and temples.
Whoever wants to discover the beauties of the Reserve can choose the itinerary that suits him best: in this case he will be able to discover not only the varied nature of the oasis but also its numerous archaeological sites such as a Hellenistic building where fish was processed, an ancient necropolis, an 18th century tuna-fishing factory and the Swabian Tower (also called Bafutu) of Arab origin, which was also once used for tuna processing.

The Municipality is part of:
Citty of flavors
Citty of wine
The Wine Road of the Val di Noto

Via Resistenza, Sortino (Siracusa)
47.10 Kilometers from Marzamemi
Apollonion
The Apollonion is one of the most important monuments of Ortigia, in Sicily.

Via dell'Apollonion, 19, Siracusa (Siracusa)
39.06 Kilometers from Marzamemi
Akrai
The ancient Greek colony of Akrai is situated in the village of Palazzolo Acreide, in Sicily.

Borgo del Carato
Romantic place with a fascinating history, a farm house in Sicily suspended between sea and count...

C.da Fondi Vecchi/Famelio - 96010, Palazzolo Acreide (Siracusa)
37.27 Kilometers from Marzamemi
Borgo Albergo
You will sleep in one of the six houses of the village provided to guests thanks to a project of ...

Via E. Pessina, 83-159, Ferla (Siracusa)
44.92 Kilometers from Marzamemi
Hotel Colle Acre
Colle Acre Hotel is located within an area of tranquillity, in Palazzolo, a city included in the ...

Marzamemi
Marzamemi, or 'marsà al-ḥamāma', (bay of turtle doves), as the Arabs had baptized the place, when they still lived here is a Sicilian fishing village dating back to the seventeenth century and a place already known at the time of Greek domination on the site. Set on a slab of rock overlooking the Ionian Sea and geographically located between Pachino a (South) and Noto a (North), in the south-eastern part of the Sicilian island, the smal...
Continue
The Recipe: Sicilian cannoli
Sicilian cannoli’s name derives from river canes to which the shell was rolled up during the preparation since a few decades ago and it is one of the typical pastries of Italian confectionary. Ingredients FOR THE DOUGH: Rice flour 800 gr Cornmeal 200 gr, cornstarch 300 gr, xanthan gum 10 gr Granulated sugar 120 gr Unsweetened cocoa powder 15 gr, baking powder 15 gr Mars...
Continue