Share
Between the Val di Chiana and the Val d'Orcia stands Sarteano, a village of historical and naturalistic importance, whose past is made known for the presence of the Castle. Its landscape offers pleasant walks, on paths with marked paths. 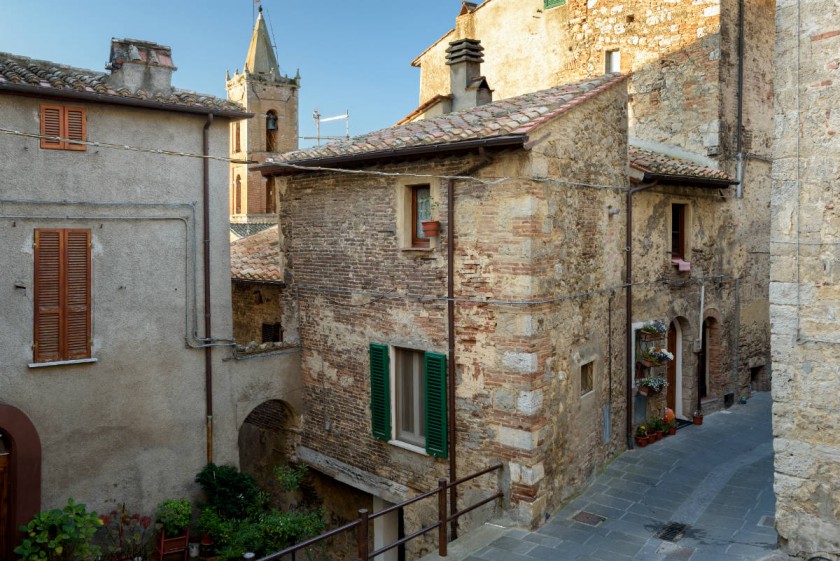 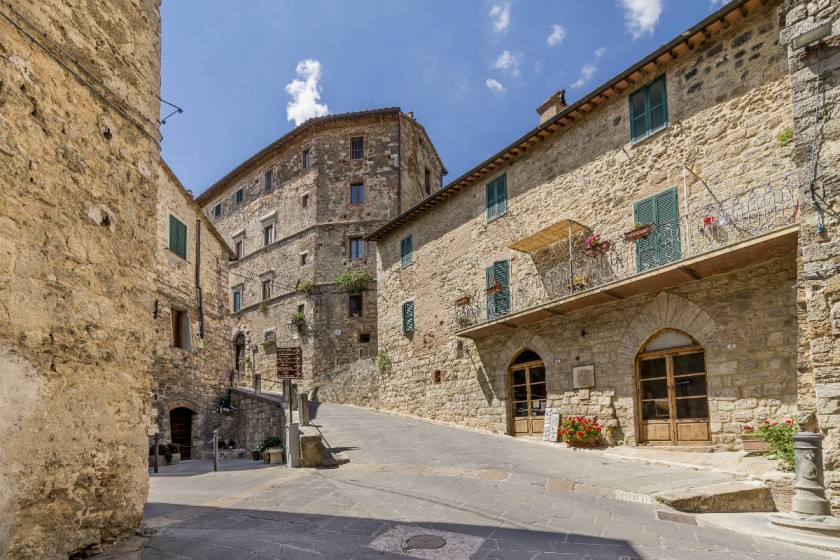 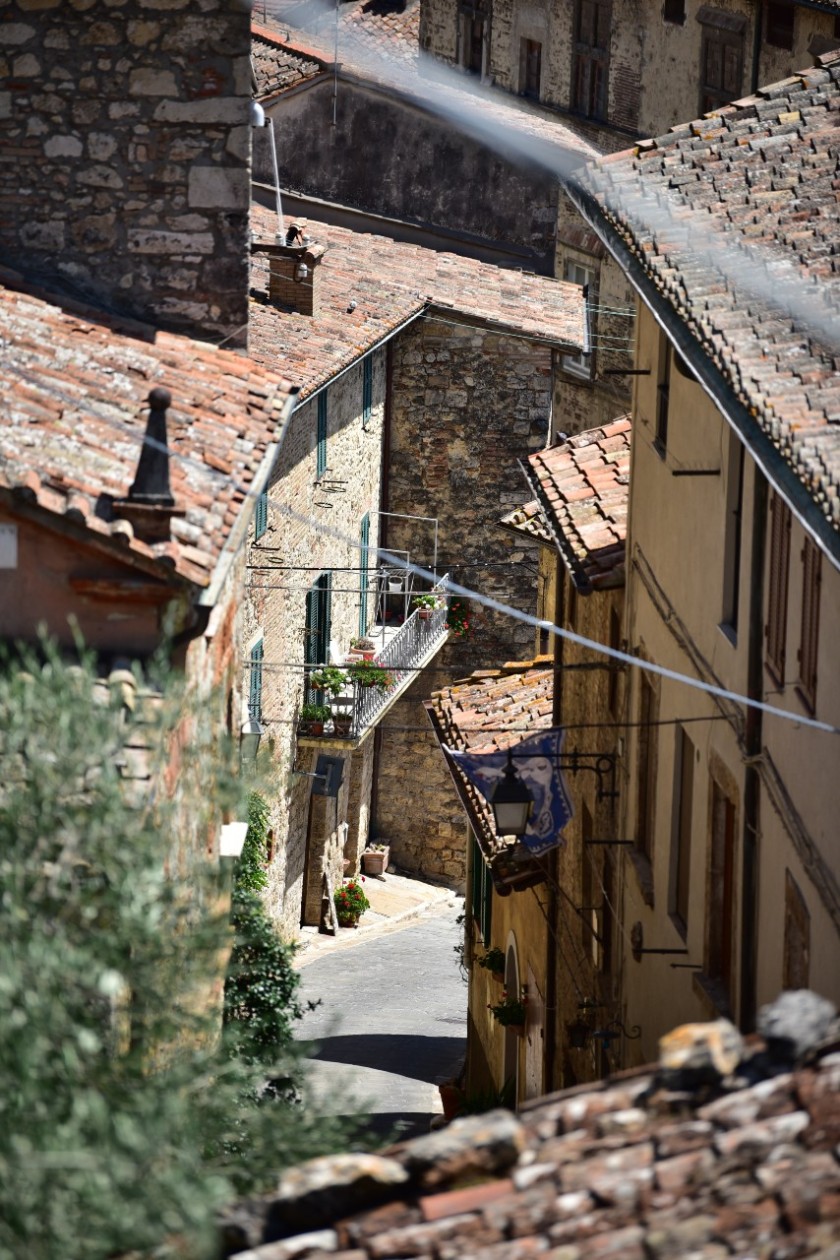 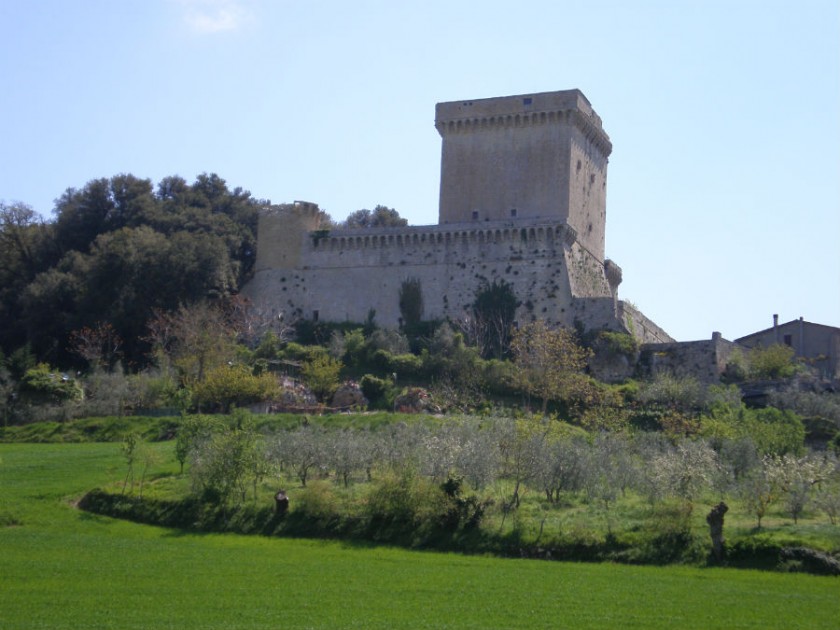 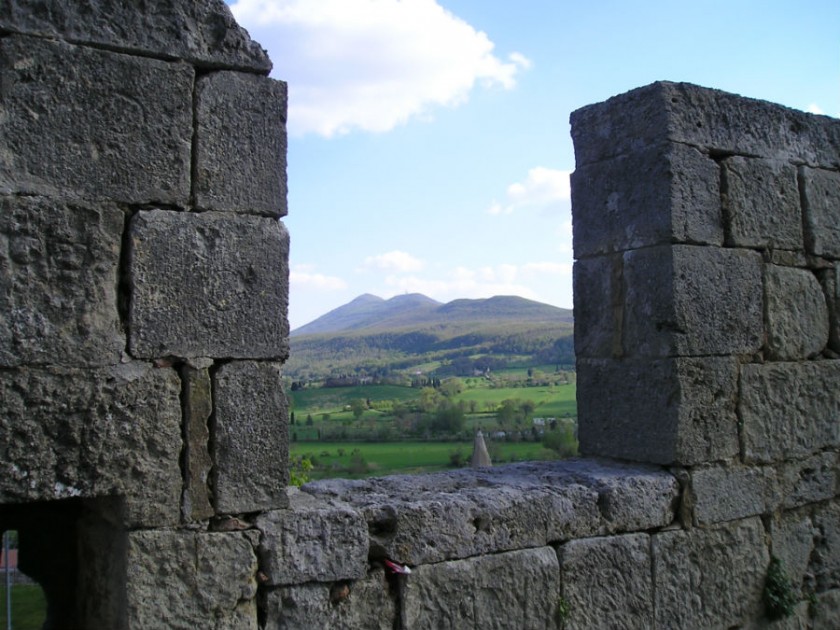 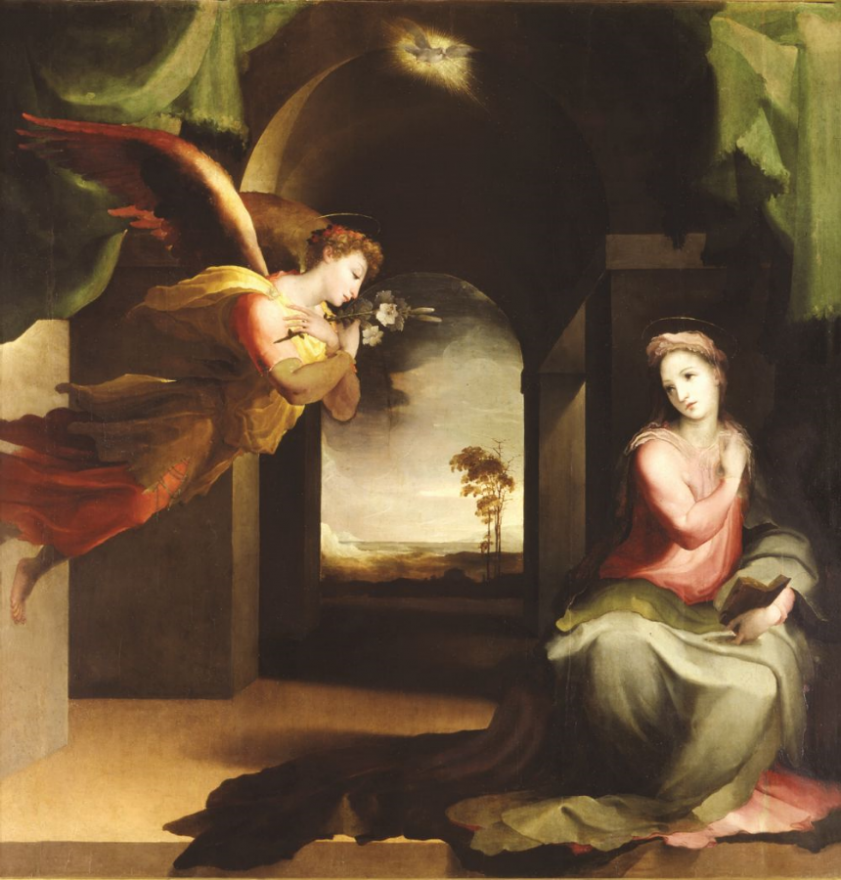 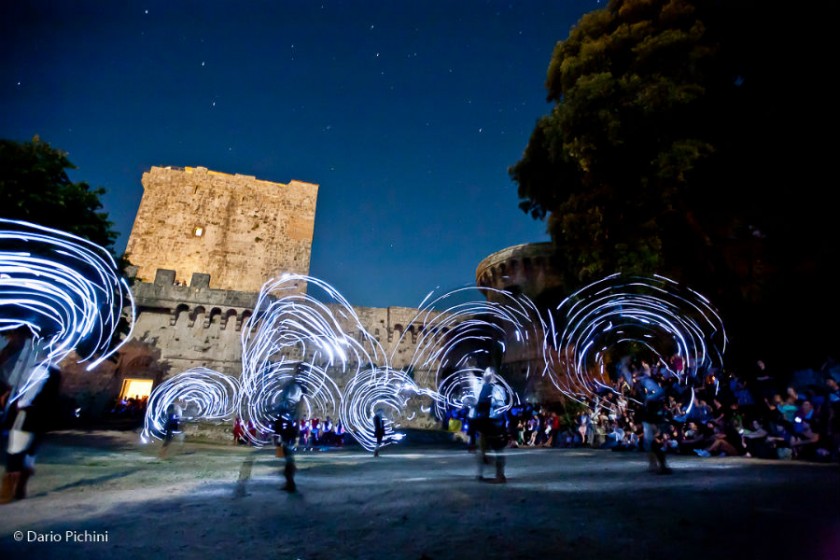 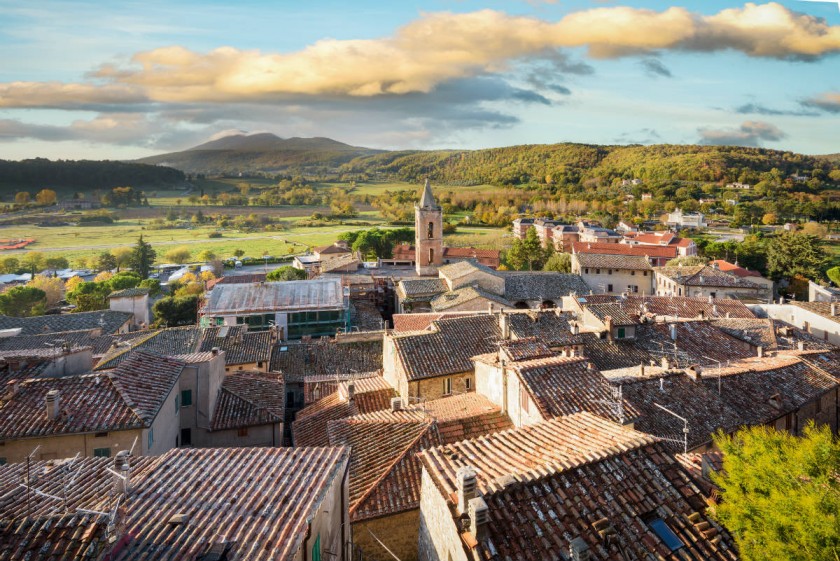 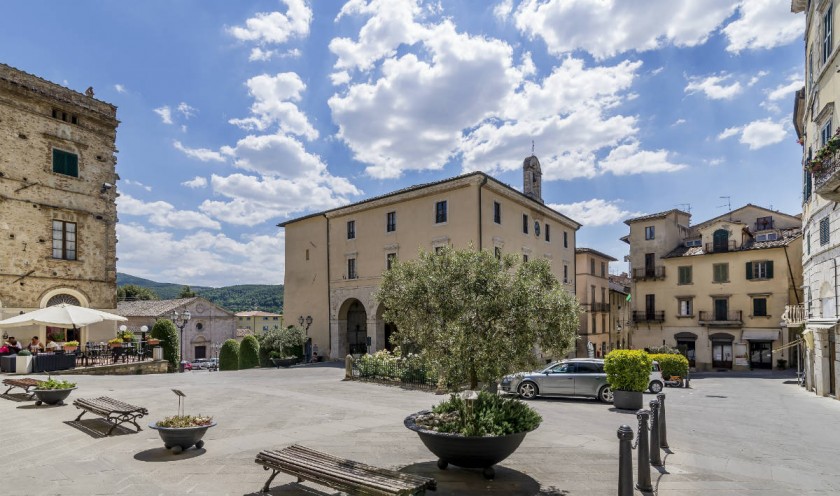 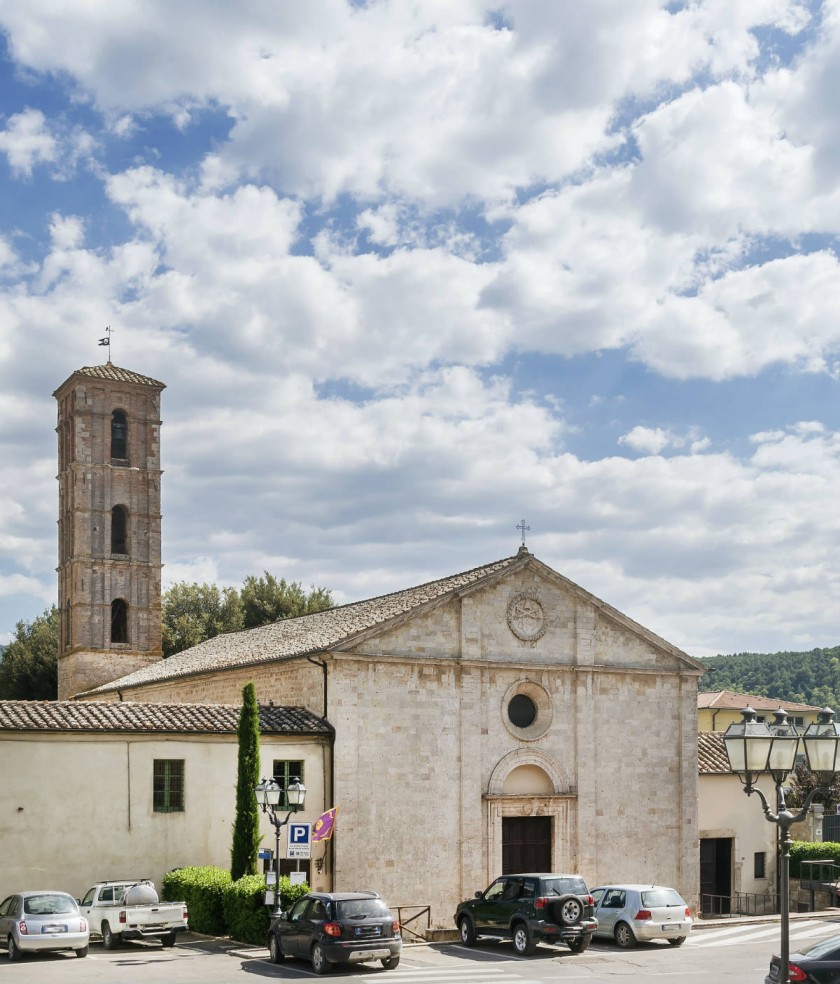 Sarteano is a village of historical importance and naturalistic, placed on the buttresses of the Val d'Orcia, in a plateau on the border with the Val di Chiana. The medieval past of the country is testified from the castle, the main element of the architectural landscape, and by a large number of churches. The economy fundamentally is based on agriculture and on tourism. The products of the earth are olive oil, wine and wheat.

From the Neolithic Period to the bronze age, the testimonies relating to the origin of the village are widely known thanks to the very rich archaeological documentation coming from the Cave of the bear. The cave, today not open, is divided into two parts, communicating through narrow passageways. In the surrounding areas, generally on the surface were found groups of vessels of the bronze age, some containing even grains of wheat, which suggested intentional depositions linked to ritual practices. The frequentation of the cave continues up to the XI century B.C. and they have finally traces of Roman times with fragments of dishes and anforoni. Another karst cavity in the territory of Sarteano is La Buca del rospo located on the western slope of Monte Cetona that returned vases of the Ancient Bronze Age deposited for a ritual collection of dripping water circuit.

But are the traces of an Etruscan past ones that have marked the territory around Sarteano, from the IX to the I century b.c. The first settlements occupied hilly areas most high, near the necropolis of Sferracavalli, along the road that leads to Radicofani and then, especially during the VII century B.C. in the area toward Castiglioncello del Trinoro where the immense necropolis of Solaia-Macchiapiana, with its numerous burials within canopi (vases cinerari a human head typical of this territory), demonstrates the presence nearby of a residential center densely populated in the late period-Orientalisation. With the Archaic Period instead, i.e. with the VI century B.C., there was a shift of the living area on the hills which are less high, slightly above 500 m., to get closer to what was at the time the political center of hegemony, i.e. the Polo Urbano of Chiusi who lived at that stage its most prosperous period, as demonstrated at the end of the century the undertakings of the Lucumone Porsenna. Thus the necropolis of greater importance of that period are precisely that of the Palazzina, placed along one of the tracks the gloomy, i.e. the viari tracings that led him toward closed, and the necropolis of Pianacce. The latter has reserved a series of extraordinary discoveries, in addition to being located in an area of great landscape suggestion with a splendid view on the Val di Chiana, control over what was a fundamental and ancient road axis north-south between Orvieto and Arezzo. In the first place the exceptional tomb of the quadriga hellish, with unique paintings and the vibrant colors of the second half of the IV century B.C. In Roman times it was maintained a widespread occupation of the area, also in virtue of the exploitation of the thermal springs and certainly two important areas of settlement had to be in the area of Sant'Alberto and in the other, very wide, of Peschiera Giannini and surrounding areas. Remains of these thermal buildings linked to rustic villae, show a remarkable degree of sophistication, as demonstrated by the plates of type Bell from Colombaio and from Peschiera. All traces of this intense and vital past are exposed in the Archeology Museum of Sarteano.

The most ancient document now exists concerning Sarteano in medieval times is dated 1038 and speaks of the castle as the fief of the Counts Manenti, distant Lombard origin. The fortress, construction surrounded by double walls with the male square and round towers at the sides. In the XIII century it was a feud of the Counts Manenti and ceded by the latter to the town of Sarteano.

The Bagno Santo, nearby the town of Sarteano, (Locality Santa Lucia) the spring gushes of gutters. The cataloging of these waters is among those sulfurous alkaline-that come out at a temperature of about 24°C These waters are believed to cure for infection of the eyes and skin. The source of gutters, together with other neighboring are known as the waters of Bagno Santo.

The Natural Reserve of Pietraporciana takes its name from the hill upon which extends separating the Val d'Orcia from Val di Chiana. Its beechwood, residue of one of the most vast beech forests, develops on the northern slope of the hill, where the microclimate is kept sufficiently cool and moist.

Worthy of note is also the fraction Castiglioncello del Trinoro, lying on a splendid natural balcony allows visitors the suggestive view of the Val d'Orcia, declared by the Unesco Italian site of the Patrimony of the humanity. The center of etruscan origins attested by numerous finds discovered in the nearby necropolis of Solaia. The tradition remembers him as Castrum Trinum Latronum, "Castle of three thieves", ready to rob pilgrims and wayfarers passage along the Via Francigena.

From the nineteenth century pharmacy, which was the cultural cenacle of the country, to the small eighteenth-century Teatro degli Arrischianti, Sarteano shows immediately its value. Worth the trip since here to the beautiful Annunciation by Domenico Beccafumi in the church of San Martino: realized in 1546, two years after the famous painter complained in a letter that he was not yet paid. The village has the good fortune of being in a beautiful territory, that puts together the uncontaminated Val d'Orcia, coffer of biodiversity, and the wonderful landscapes of the Val di Chiana.
Conscious of living in a blessed place in the ancient heart of central Italy, 5thousand inhabitants were able to constitute a thirty associations, all culturally alive and busy even where one would expect only peace, silence and perhaps boredom. On the contrary: Sarteano is bubbling of activity, it has a vibrant theatrical and musical scene (the Accademia degli Arrischianti, founded in 1731, was refounded thirty years ago), it attracts artists and preserves its craftsmen. Visited the palaces of the most ancient and important families, and the castle around which arose the village, it exits from the historical center to climb along Monte Cetona, whose slopes are dotted with small settlements, ruins, sources, streams. The toponyms remind us of the ties with history, with the ancient families, with water. The charm of these paths is not given only by the beauty of nature, but also from their ancient bond with the man: first by the Etruscans and then the pilgrims and wayfarers directed along the Via Francigena.

Fortress of Sarteano
The fortress of Sarteano, in Tuscany, is a building surrounded by a double circle of walls with t...
Via del Forte, 57, Sarteano
Archaeological Museum of Sarteano
The Archaeological Museum of Sarteano, in Tuscany, is hosted in the rooms of the sixteenth-centur...
Via Roma, 24, Sarteano
St. Andrew's Church
the St. Andrew's Church is located in Castiglioncello del Trinoro, near Sarteano Tuscany.
Via di Mezzo, 2, località Castiglioncello del Trinoro, Sarteano
collegiate church of San Lorenzo
The collegiate church of San Lorenzo in Sarteano Tuscany dates back to the beginning of the XIII ...
Piazza S. Lorenzo, 1, Sarteano
Church of St. Martin in Foro
The Church of St. Martin in Foro of the village of Sarteano Tuscany, stood in the main square of ...
Costa Vallepiatta, 1, Sarteano
Museum of Mount Cetona Prehistory
The Museum of Mount Cetona Prehistory documents the various stages of human settlement in the ter...

Palazzo Comunale, Via Roma, 37 , Cetona (Siena)
3.86 Kilometers from Sarteano
The Museum of the Cathedral and the Labyrinth of Porsenna
The name derives from the description of Plinius the Elder of the mausoleum of Porsenna, the lege...

Piazza Duomo, 2, Chiusi (Siena)
7.12 Kilometers from Sarteano
Concattedrale of San Secondiano
The Concathedral of San Secondiano, in the village of Chiusi, is characterized for its isolated b...

Via dei Longobardi, 291, Chiusi (Siena)
7.17 Kilometers from Sarteano
Radicofani Fortress
The construction of Radicofani Castle, in Tuscany (IX century) is attributed to the Carolingian E...

Piazza Grande, 4, Montepulciano (Siena)
13.47 Kilometers from Sarteano
The Museum of the Cathedral and the Labyrinth of Porsenna
The name derives from the description of Plinius the Elder of the mausoleum of Porsenna, the lege...

Find where to sleep in Sarteano

The Way of Etruria: from Volterra to Chiusi, 12 exciting stages in the footsteps of the greatest pre-Roman civilisation
When one thinks of the great civilisations of Italy's past, the Romans immediately come to mind; yet not everyone knows that this glorious people, who dominated the world for centuries, drew much from another civilisation that excelled on Italian soil: the Etruscans. They occupied a vast territory stretching from the river Arno to the Tiber, encompassing the current regions of Tuscany, Lazio and Umbria. They founded eleven major centres that f...
Continue
Unique Tuscan villages to Love - Download a free travel guide to the 51 certified Tuscan villages
It has recently been made available a free travel guide by Toscana Promozione Turistica, in Italian and English, about 51 Tuscan villages certified in the Borghi più Belli D'Italia, Paesi Bandiera Arancione, Mibact's Gioielli d'Italia and UNESCO World Heritage Sites. The volume, edited by Claudio Bacillieri, director in chief for Borghi Magazine, accompany th...
Continue