Share
Defined the Manhattan of the Middle Ages, known above all for the medieval towers that stand out on its panorama, the village of San Gimignano, stands on a high hill in the Val d'Elsa. An agricultural town known for the Vernaccia wine production, one of the finest white wines, and the cultivation of saffron. 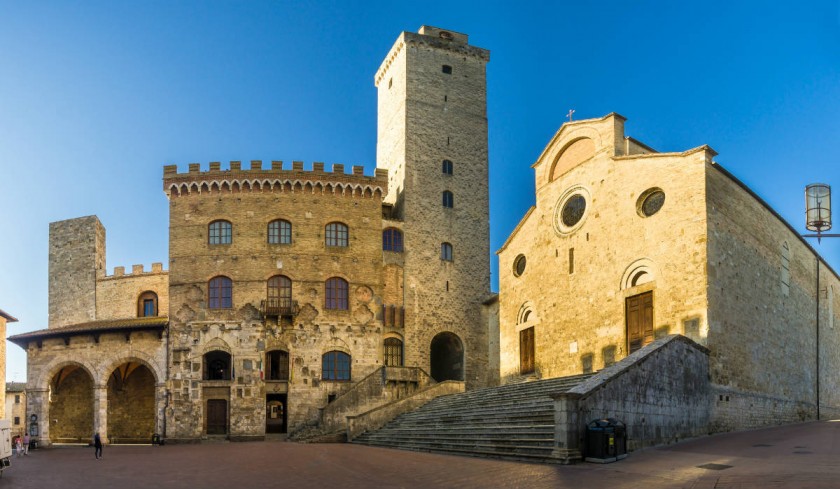 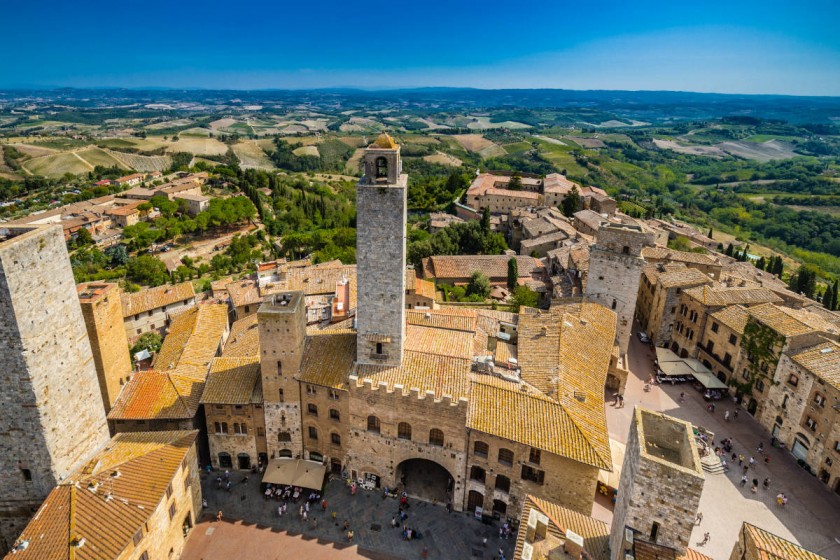 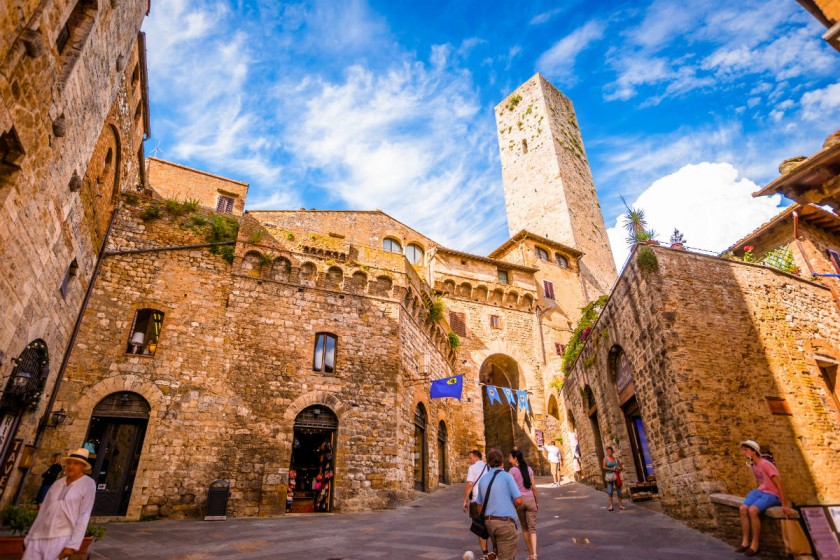 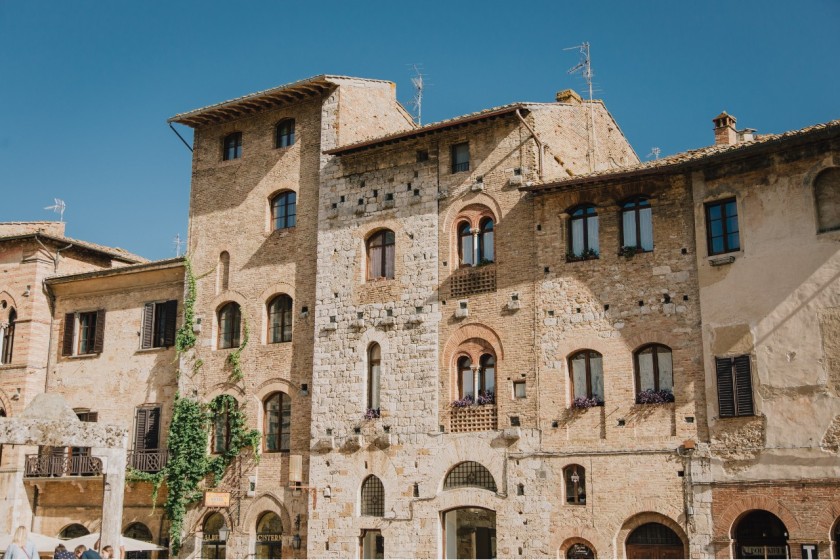 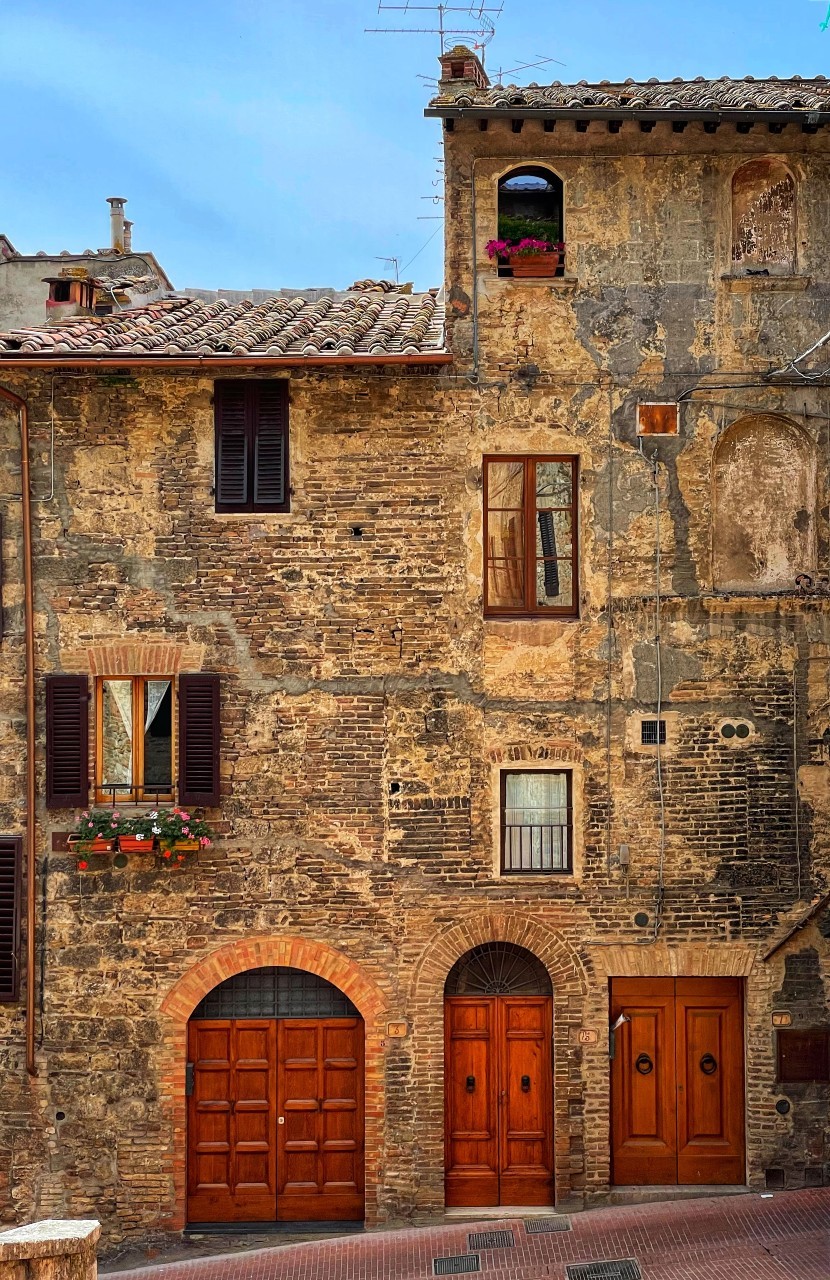 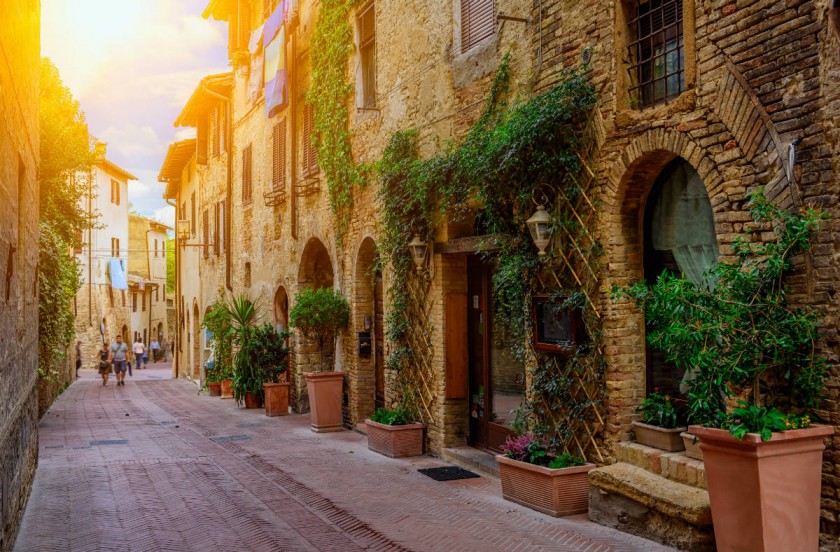 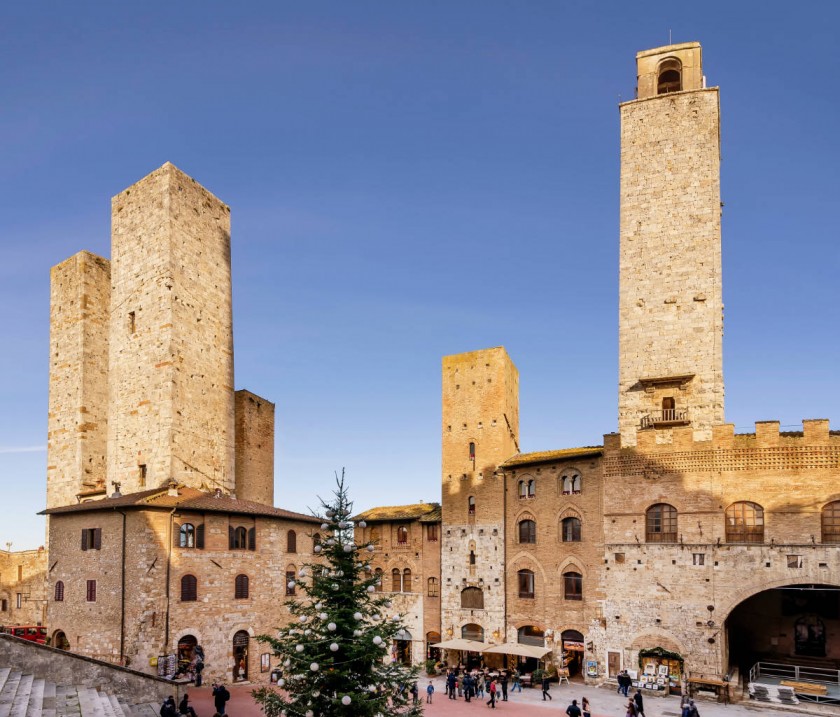 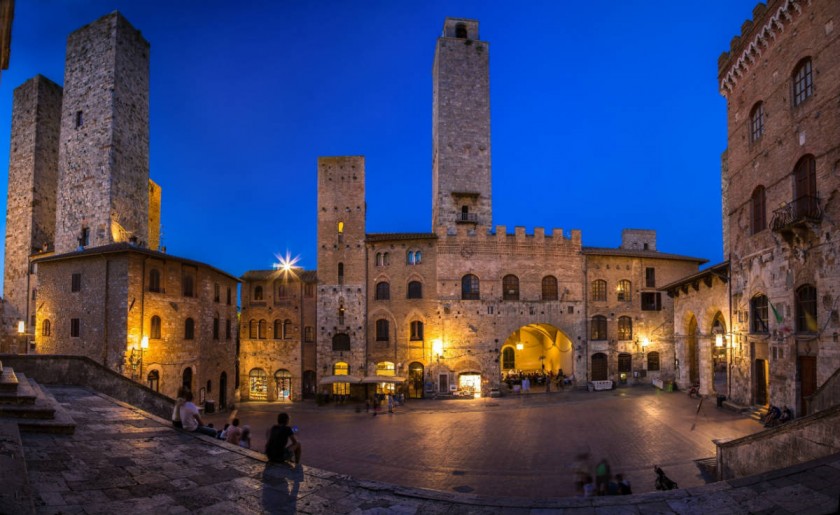 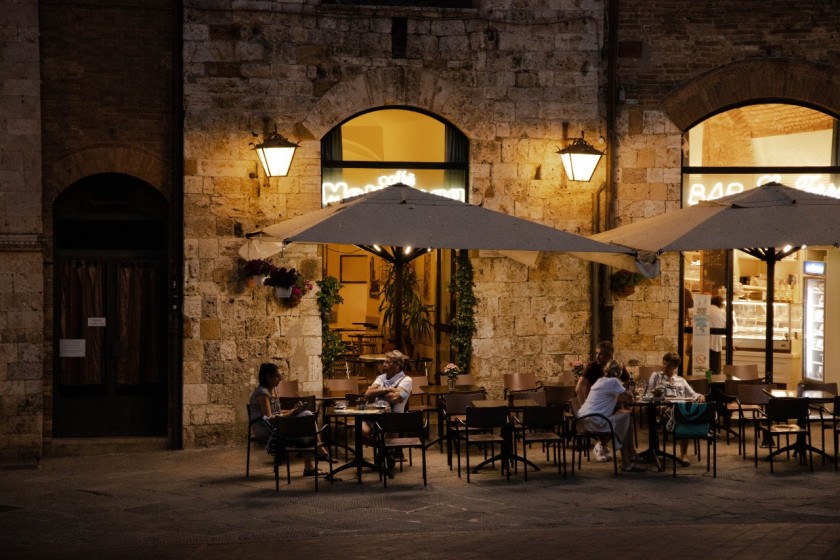 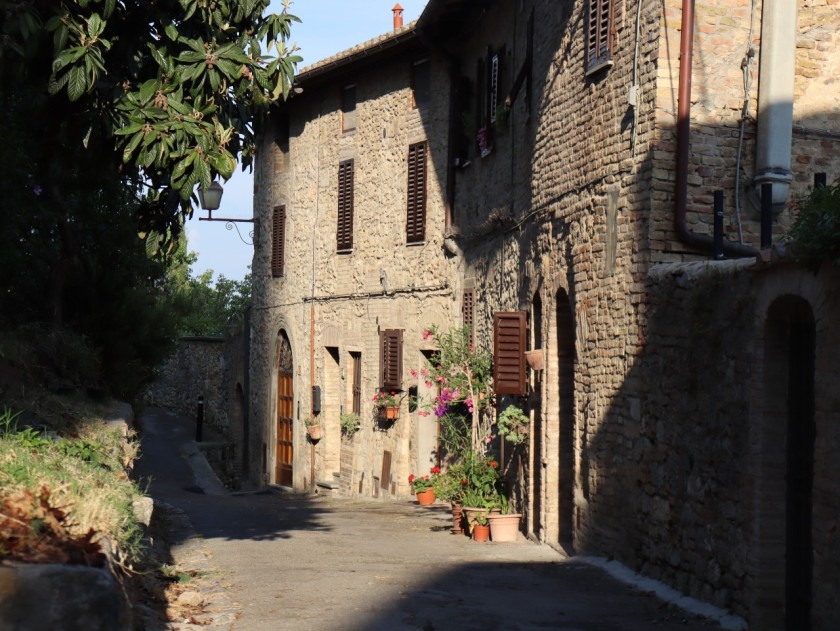 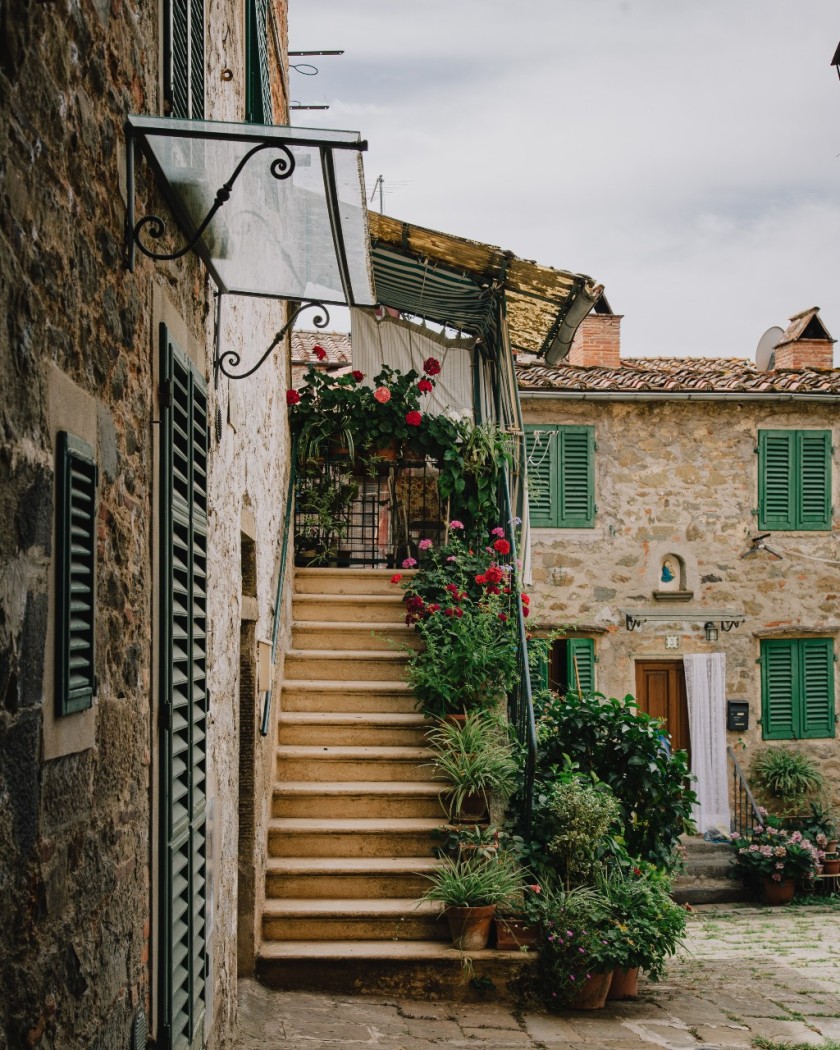 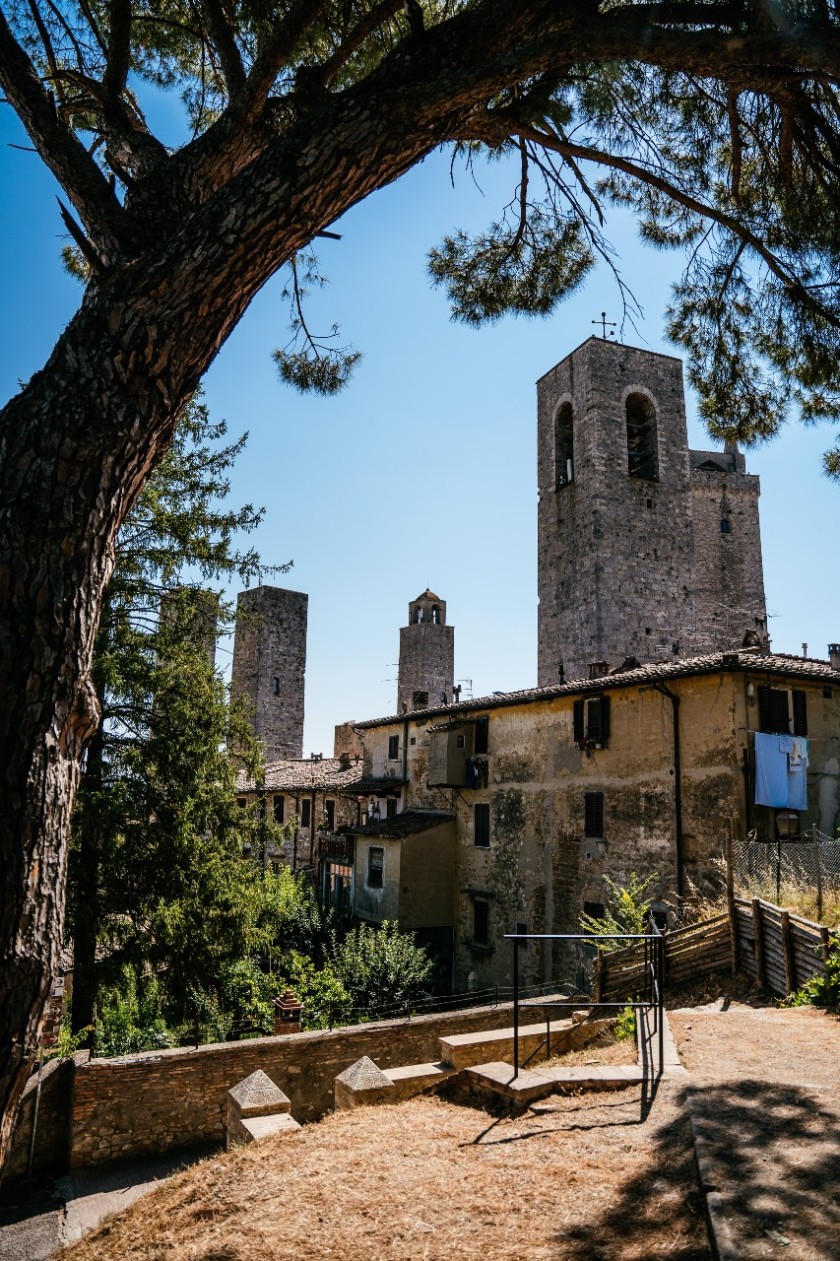 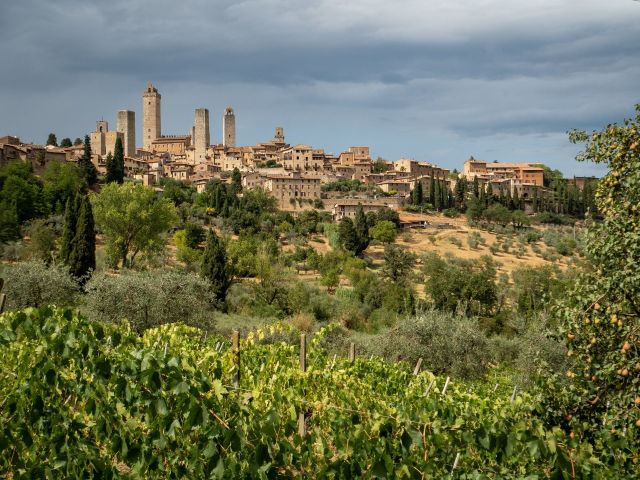 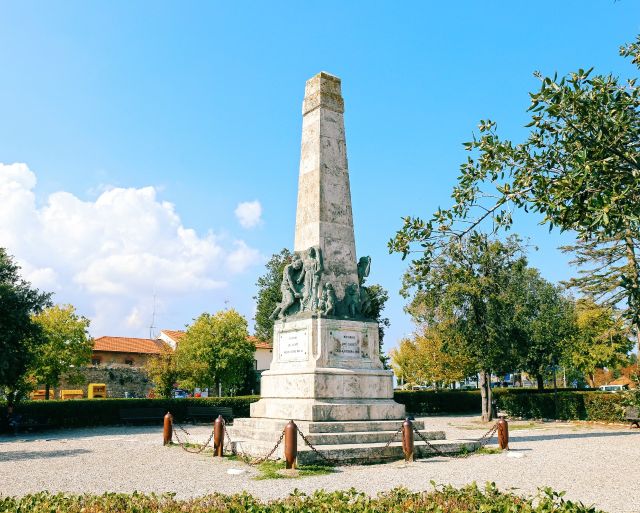 A look at San Gimignano 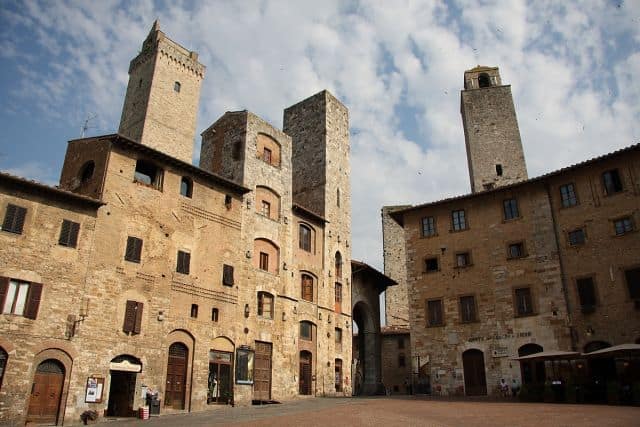 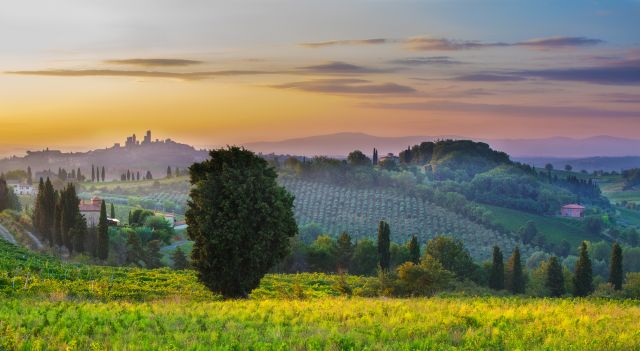 The village of San Gimignano, located on a high hill in the Val d'Elsa, is a small fortified town halfway between Florence and Siena.

Known above all for the medieval towers that stand out on its panorama, San Gimignano has acquired the nickname of Manhattan of the Middle Ages. The oldest is the Torre Rognosa, which is 51 meters high, while the highest is the Torre del Podestà, also called Torre Grossa, 54 meters.

San Gimignano is a farming town famous for its Vernaccia wine production and saffron cultivation, which with its characteristic, pungent and slightly bitter taste can be combined with fish, vegetables and white meats.
The Vernaccia di San Gimignano is one of the finest white wines, is produced in a small area of Tuscany between Siena, Pisa and Florence coinciding with the municipal territory of San Gimignano.
It is well known and appreciated throughout the world and was the first Italian wine to receive the mark of Denomination of Controlled Origin (DOC) in 1966.

Tuscany is a region where 15 types of prized honey are produced, all of excellent quality and in San Gimignano it is produced mainly that of acacia and millefiori. In the kitchen, in addition to the combinations with cheeses, honey is excellent for the preparation of desserts.

If you arrive at San Gimignano any day, perhaps at dusk, when the stone streets are lost in the dark leaving the towers the last breath of light, it is not difficult to be influenced by the aspect of the town, feeling suddenly at the gates of the Middle Ages.
You enter almost foreigners, rising up the track that has given substance to the town. From the port, on to the contrada San Matteo until the heart, with the two squares: the religious with the Cathedral and the civil, called Della Cisterna, with noble houses.
The Francigena road, axis of pilgrims going to Rome, crossed the inhabited area from north to south. Also for this reason that the XIII century it was the moment of greatest economic fortune of the city and its countryside, thanks to the saffron trade throughout Europe. In the XIV century followed, however, a rapid decline, which led in 1351 to the subjugation to the city to Florence. The XIV and XV centuries were fundamental however from an artistic point of view, thanks to the presence in the city of numerous teachers, from Siena or Florence, called especially from religious orders to embellish their possessions: San Gimignano fills, thus, with works of Barna da Siena, Bartolo di Fredi, Taddeo di Bartolo, Benozzo Gozzoli.
It is as unique as its own decline and the marginality that the city has suffered until the nineteenth century were the conditions that have allowed the extraordinary crystallization of its medieval appearance: reason why today San Gimignano is counted among the Unesco World Heritage Sites.

The Consortium worked towards attainment by the DOC Vernaccia di San Gimignano of DOCG recognition in 1993. It also worked for the birth, in 1996, of the San Gimignano Rosso DOC, which became San Gimignano DOC in 2012, with which it is possible to make “Rosso”, “Rosato” and “Vin Santo”.
These include the selection of new clones of the Vernaccia di San Gimignano grape variety, which began in 1994 in collaboration with Florence University and the plant nursery Vivai Rauscedo, and led to the homologation of eight new Vernaccia clones between 2002 and 2007; the Vernaccia di San Gimignano Sensorial Identity project, accomplished with the staff of Professor Bertuccioli of Florence University, which led, in 2008, to the definition of the sensorial profile of Vernaccia di San Gimignano, a tool that is essential to the recognition of the grape variety through sensorial analysis; the identification of the DNA of Vernaccia di San Gimignano and its traceability in wine, a research pursued by the Sergè company of Siena University, with the contribution of the Province of Siena, starting from 2009, which led to the identification of the DNA of Vernaccia in 2010 and continued with the study on traceability, completed in 2012.
In 2012, the year of the fortieth anniversary of its foundation, Consorzio della Denominazione San Gimignano attained the Erga Omnes, the extension of the institutional tasks to all users of the denomination (appellation), members and non-members, obliging the latter to contribute to the consortium’s activities.
This is a historical step through which the legislation recognises that the promotional and defensive activities managed by Consortia provide benefits to all users of the denomination. To achieve a constant general qualitative improvement in the production of both grapes and wine, the Consortium organises constant refresher courses aimed at its members for the agronomical management of vineyards and cellar techniques, and creates projects in conjunction with Research Institutes.

Via Giovanni Boccaccio, 18, Certaldo (Firenze)
8.35 Kilometers from San Gimignano
The Palazzo Pretorio
Palazzo Pretorio or dei Vicari is located in Certaldo, in Tuscany.

Via Borghetto, 1, Barberino Tavernelle (Firenze)
13.81 Kilometers from San Gimignano
The collegiate church of Santa Maria Assunta
The primitive church was built inside the Castle of Casole, a village that drew its wealth from b...

Strada Provinciale 9 di Pievasciata, 48/49, loc. Pievasciata, Castelnuovo Berardenga (Siena)
28.75 Kilometers from San Gimignano
Palazzo Pretorio
In the middle of the road that connects the imposing fortress to the Collegiate Church of Santa M...

S.P. Monte Volterrano, 8, Volterra (Pisa)
17.66 Kilometers from San Gimignano
Lupaia
An agritourism resort in the heart of Tuscany, between Pienza Montepulciano. La Lupaia is a luxur...

Travel proposals in San Gimignano and in its territory

Traditional procession of the Holy Cross, with the confreres of Mercy

San Silvestro under the Towers

Our news about San Gimignano

Crossing is more important than arriving
I tasted my first ribollita in Gambassi Terme after a 24 kilometer stage under the sun of the Val d'Elsa that wanted me to believe I was still in August, between the dust of the white roads and the water that was never enough. A nice guy with a strong Tuscan accent served it to me. For me everything was new, he, on the contrary, gave me a distracted look, like someone who sees wayfarers every day. The idea of putting me in gear came to me by ...
Continue
Tuscany: The Vernaccia of San Gimignano, the great white wine of the heart of Siena.
Among the most picturesque and fascinating villages of Italy, the characteristic medieval architecture of its historic center has long been declared a UNESCO World Heritage Site. When you come to his sight you can not stay unenchanted. San Gimignano is famous for the ancient towers that make up the impressive profile of the hamlet, and have earned it the medieval Manhattan nickname, swaying on the abbey and the extraordinary surrounding landscape. There were over seventy towers and house-towers of the town of San G...
Continue
Carnival in the Villages: The best events not to be missed
Carnival in the Villages is a great celebration that involves everyone, from the youngest to the oldest. An opportunity to rediscover local traditions and customs, have fun with masks, dancing, parades of floats, street performers, musical and entertainment shows, games, crafts, street food, tastings and markets. Several events are organized every year all over Italy, which are not to be missed. In Florence, for example, the Great Carnival Parade is a must-see event: a big party dedicated to children that includes masks, music, ga...
Continue
San Gimignano is going back to the Dark Ages
San Gimignano returns to relive the Dark Ages. No, the inhabitants of the Tuscan village, famous throughout the world for its multiple towers, will not be deprived of all the comforts of today, falling back suddenly in the medieval era. The Municipality has decided to join the Earth Hour WWF 2019, scheduled for Saturday 30 March. Lights out, therefore, at the Loggia del Teatro in Piazza Duomo: this is what the administrative council has ordered, on the occasion of the internation...
Continue
Unique Tuscan villages to Love - Download a free travel guide to the 51 certified Tuscan villages
It has recently been made available a free travel guide by Toscana Promozione Turistica, in Italian and English, about 51 Tuscan villages certified in the Borghi più Belli D'Italia, Paesi Bandiera Arancione, Mibact's Gioielli d'Italia and UNESCO World Heritage Sites. The volume, edited by Claudio Bacillieri, director in chief for Borghi Magazine, accompany th...
Continue