Share
A medieval village located between the Val di Merse and the Crete of the Val d’Arbia. Small and charming, Murlo is the center of an agricultural and tourist area full of villages, castles and churches. The landscape has high and wooded hills on the side of the Merse river while towards the Grosseto Maremma, on the side of the Arbia river, the hills are lower and softer, typical of the Sienese Crete. 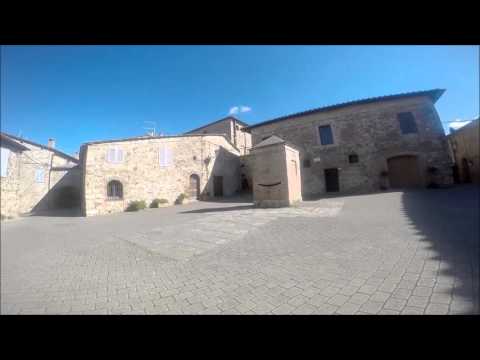 Murlo is a medieval Tuscan village situated in a border position between the Val di Merse and the Crete of the Val d’Arbia. Small and charming, Murlo is the center of an agricultural and tourist area rich in villages, castles and churches.
The name derives from the latin murulus ("Muretto"), with the meaning of "walled place", but it also seems could derive always from the latin "mus" ("mouse") having regard to the rampant mice on the oldest municipal coats of arms.
The landscape presents high hills and woodland on the slope of the river Merse going toward the Maremma grossetana; instead, on the slope of the river Arbia, the hills are low and softer typical of Crete Senesi.

Murlo is famous all over the world for its ancient past told by the Etruscan settlements, whose testimonies can be admired in the local Museum "Antiquarium of Poggio Civitate", located in the historic center.
From 1189 to 1778 the town was the seat of the eponymous episcopal fiefdom, ecclesiastical lordship ruled by the bishop of Siena, of which the palace, the adjoining parish church of San Fortunato and the famous castle, consisting of two access gates, remain.

The territory of Murlo also includes the centers of Casciano di Murlo and Vescovado. The latter is an ancient center formed by the merger of the two villages of Andica and Tinoni, which at the beginning of the 19th century were still separated.

The area's livelihood is agriculture, sheep farming, oil and wine production. Developed is the activity of hunting and fishing, which engages so many murlesi. The territory also lends itself to the search for the delicious white truffle.

On the one hand the lands coached by art and medieval civilisation, but also by wars and riots, on the other hand the stories of ancient stands, of tombs of the cults of the people of lucumoni. Murlo, erected on a sunny hill at the boundary between the basin of the Arbia and the first maremmana land, is also located at the boundary between the cultural and artistic influence of Siena and the most ancestral etruscan background. It is said that for its isolation, Murlo and its inhabitants have inherited and maintained a direct descendants from that people, also demonstrated scientifically through genetic analyzes carried out on the current inhabitants.
You can admire testimonies of the etruscan origins of the town at the local museum Antiquarium, situated in the historical center inside the Palazzo Vescovile. Not only a collection of finds, but a cultural-historical trip inside the princely residence of Poggio Civitate. There you can observe statues of male figures, animals, sphinxes, a gorgon, friezes depicting various moments of the primitive family life.
The village is tiny, entirely collected inside a perimeter of a vaguely triangular shape of the walls of the XII century, on which it is juxtaposed with a curtain of buildings.
Being among the woods and valleys of the surroundings, the suggestion is to take the fascinating path that runs on the track of the old railway line for "The Befa", with different staging points and the possibility to get closer to the places of the lignite mines with its labor village.

Via della Rocca, 1, San Gimignano (Siena)
44.11 Kilometers from Murlo
Montalcino Fortress
The fortress of the village of Montalcino, in Tuscany was built in 1361.

Piazza Grande, 4, Montepulciano (Siena)
32.80 Kilometers from Murlo
Pottery Museum
The Pottery Museum is located in the locality of Petroio, in the village of Trequanda, in Tuscany.

Strada Provinciale di Pieve a Salti , Buonconvento (Siena)
10.76 Kilometers from Murlo
Agriturismo Spazzavento
Our Agriturismo dates back to the XVIII Century when a few monks from Città della Pieve, decided ...

Via Berignano, 76 - 53037, San Gimignano (Siena)
43.92 Kilometers from Murlo
Azienda Agrituristica Pomponi
In a genuine Tuscany, an authentic farm greets you with the sincere warmth of a family.

loc. Santa Margherita, 34 , San Gimignano (Siena)
45.28 Kilometers from Murlo
Pasticceria Il Campanile
A small place located at the entrance of San Casciano, where you can enjoy excellent croissants a...

Viale Gramsci 9, San Casciano dei Bagni (Siena)
51.15 Kilometers from Murlo
Giacomo Mori
Since the end of the 19th century, the wine, born in the cellars of Palazzone, has travelled the ...

Piazza Pertini, 8, San Casciano dei Bagni (Siena)
53.82 Kilometers from Murlo
Cantine Ravazzi
The Ravazzi Cellars have conquered the area between Umbria and Tuscany as a synonym of genuineness.