Share
Wrapped in the splendid stone walls, the medieval village of Monteriggioni rises at the south-western end of the Chianti region. The beating heart of the village is the Castle, founded in the second decade of the thirteenth century by the Republic of Siena.

A look at Monteriggioni 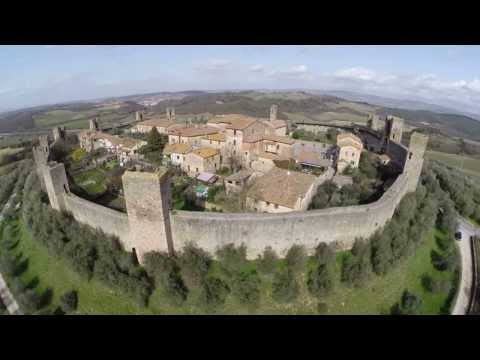 The medieval village of Monteriggioni is a part of the so-called the Montagnola Senese. The territory has stretches extremely differentiated: it can in fact be easily noted how around the relief of Montemaggio there are some small plains as Pian del Lago and Pian del Casone, Il Canneto, alternating with a series of small valleys formed by rivers and streams that characterize the central part and eastern part of the territory.

The castle of Monteriggioni was built by the Sienese, for order of the podesta Guelfo from Porcari, in a period between 1214 and 1219. The ground, purchased by the noble family from Staggia, was the site of an ancient Lombard farm (the designation of Montis Regis probably indicated a bottom of royal property or that enjoyed tax exemptions from the crown portion). The construction of the castle by the Republic of Siena had mainly defensive purposes, as the village rose on Monte Ala in position of domain and surveillance of the Francigena, to check the valleys of the Elsa and of the Staggia in direction of Florence, historic rival of Siena. The building practically ex novo of a castle was a novelty in the expansionist policy of Siena: previously, in fact, the city had purchased castles already existing. The circular path of the walls was obtained simply by following the trend hill natural. The castle of Monteriggioni was also surrounded by so-called charcoal burners, i.e. moats filled with coal that was burned to repel the assaults.

The plain at the foot of Monteriggioni was occupied by a swamp, on the margins of which faced Monteriggioni and the ancient Abbadia a Isola, that depended on the bishop of Volterra. When the monks of the Abbey began the land reclamation of the marsh digging a tunnel to divert the waters, the senesi filled overnight because the swamp was a natural protection against the armies of enemies. The question went on for a long time, until in 1246 it came to a compromise: the monks ultimarono gallery, and the Senese preserved a substantial area near the castle. Still today, in the plain of the reclaimed, emerges an old tower, located just above the underground gallery: served as a breather and input for the maintenance of the tunnel, which today is no longer viable because blocked by debris.

The core of Monteriggioni is a small fortified village. The diameter of the castle is 172 meters, surrounded by a massive walls of elliptical shape with a thickness of up to 2 meters, interspersed with 15 towers and two ports, which surrounds a hill called Monte Ala. The Towers, today, rise above the walls to 6.5 meters, with a thickness of 4x6 meters, and are visible only 11: the other four were reduced to the level of the walls (were "cimate") the 11 raised were, so to speak, restored in the 1920s, on the occasion of the centenary Dantesque 1921, because visible from the then via the main transit, the Cassia. Above the walls ran a walkway that traveled around the entire perimeter. In 2005 were rebuilt some parts of the walkway, from which you can enjoy a unique view and suggestive. The Porta Franca or Romea (oriented toward Siena) rises at the base of a tower while that toward Florence, bears underneath, opens in the wall and is next to one of the towers of the fortified perimeter. Entering from Porta Franca or Romea, which originally was equipped with a heavy railing which was lowered in the event of danger, you enter Piazza Roma, the heart of the village. The square was originally "a sterro" (without flooring), but was paved in the seventies with stone from the quarries of Rosia (said stone from Torre). Today the square is surrounded by gardens and orchards, very important in the past to allow the survival of the population even in case of siege. The square is overlooked by the Church of Santa Maria Assunta.

One of the oldest towns of the territory is that of Abbadia a Isola, beyond Abbadia you can visit Strove, an ancient village of Little back to the VI century with a precious Pieve a hut. Inside the former marshes of the Canneto and near scanty is located a etruscan necropolis dating back to the IV century B.C. Other places of remarkable importance are the fourteenth-century castle of the nut and the villa of Santa Colomba that, on horseback between the fifteenth and sixteenth century, was the residence of the lord of Siena Pandolfo Petrucci.

Dug in your literary memories and pull out that passage of Dante's Inferno: "… as upon its round enclosing walls Montereggione crowns itself with towers ". Since those times astonished all. From the beginning of the thirteenth century, when it was not yet a village, but a small fortress, an outpost along the ancient road Romea that already for centuries was beaten by the pilgrims.
Inside the walls, which adapt to the altimetric curves of the hill, the building, made of low houses which slightly exceeds the height of the waist, is set on a quadrangular mesh, with three tracks parallel to each other and a large square, rightly considered the most beautiful among the small squares of Tuscany. On one of its sides, the prospect of the church of Santa Maria Assunta, in romanesque-gothic style. Is hereby appointed parish church already in the XIV century.
Do not forget that in the territory of Monteriggioni rises from the beginning of the XI century, well before the turreted village, one of the most important religious buildings of the whole of the Val d'Elsa: the Badia dei Santi Salvatore, Cirino and Sebastiano, otherwise known as Badia a Isola, erected around the year one thousand for want of a noblewoman of Lombard origin, Lady of Monte Maggio and Val di Strove, in aid to the pilgrims.
Thousand and even more are the treasures of art and nature that hides the territory of Monteriggioni: its position between ancient runs of Etruscan, Roman, Mediaeval and modern has made it a formidable "park of wonders" to investigate with passion and with every means: on foot, on horseback or by bicycle.

Via Provinciale - 53031, Casole d\'Elsa (Siena)
15.19 Kilometers from Monteriggioni
Rocca Senese
The Rocca di Casole d'Elsa, now the seat of the Municipality, is a fourteenth-century fortress co...

Viale Italia, 8 - 56025, Casole d'Elsa (Siena)
55.76 Kilometers from Monteriggioni
The collegiate church of Santa Maria Assunta
The primitive church was built inside the Castle of Casole, a village that drew its wealth from b...

Via Berignano, 76 - 53037, San Gimignano (Siena)
16.86 Kilometers from Monteriggioni
Agriturismo Spazzavento
Our Agriturismo dates back to the XVIII Century when a few monks from Città della Pieve, decided ...

Loc. Spazzavento, Fraz. Piazze - 53040, Cetona (Siena)
79.61 Kilometers from Monteriggioni
Azienda Agrituristica Pomponi
In a genuine Tuscany, an authentic farm greets you with the sincere warmth of a family.

loc. Santa Margherita, 34 , San Gimignano (Siena)
18.50 Kilometers from Monteriggioni
Pasticceria Il Campanile
A small place located at the entrance of San Casciano, where you can enjoy excellent croissants a...

Viale Gramsci 9, San Casciano dei Bagni (Siena)
78.36 Kilometers from Monteriggioni
Cantine Ravazzi
The Ravazzi Cellars have conquered the area between Umbria and Tuscany as a synonym of genuineness.

Via delle Cantine, 2 - Loc. Palazzone, San Casciano dei Bagni (Siena)
80.23 Kilometers from Monteriggioni
Giacomo Mori
Since the end of the 19th century, the wine, born in the cellars of Palazzone, has travelled the ...

Crossing is more important than arriving
I tasted my first ribollita in Gambassi Terme after a 24 kilometer stage under the sun of the Val d'Elsa that wanted me to believe I was still in August, between the dust of the white roads and the water that was never enough. A nice guy with a strong Tuscan accent served it to me. For me everything was new, he, on the contrary, gave me a distracted look, like someone who sees wayfarers every day. The idea of putting me in gear came to me by ...
Continue
5 romantic villages for emotions between poetry, dream and reality
Not just Halloween, trick or treat. Our Peninsula is dotted with romantic hamlets in which drunkenness rhymes with tenderness: to spend a day, a weekend or a long bridge in evocative atmospheres. 1. Monte Isola (Lombardy) Lake Iseo: refined, intimate and "vintage", with its pastel colored villas overlooking the water and, around, a crown of parish churches and monasteries. With a primadonna, Monte Isola, which stands out in the m...
Continue
La Bagnaia Golf & Spa Resort Siena: welcome to the medieval village
The sparkling air and the spectacular landscapes of the Sienese countryside are the ideal destination for a journey far from everyday life, the office and the city. Above all, allow you to regain the pleasure of a holiday in which every moment is a gift. The right address is La Bagnaia Golf & Spa Resort Siena, Curio Collection by Hilton, an authentic and perfectly preserved medieval village, an oasis of peace and tranquility set in 1,100 h...
Continue
Castello di Velona: tastings of Montalcino
At the Castle of Velona Resort Thermal Spa & Winery wellness is the order of the day. Signature cuisine, first of all, then treatments in the thermal spa, tastings of typical Tuscan products and wine tasting with champions of Bacchus from the best Italian vineyards. The Castello di Velona, ​​in fact, is the author's setting for the wine tasting - with the skilful direction of the Millenaria Tower sommeliers - in which guests can taste wine...
Continue
The Legend of Captain Zeti at Monteriggioni
Monteriggioni is a village in the hills of Montagola Senese, which, rising from the relief of Montemaggio, dominates the surrounding area. The hamlet is also called the "crown of Italy" because of the shape that the numerous towers enclosed by the walls give to the hamlet. Founded as an outpost in the 13th century, in ...
Continue