Share
On the border with Umbria, Chiusi is famous for the splendid Etruscan vestiges, countless excavations, unearthed finds unique in the world, these precious testimonies are exhibited at the National Etruscan Archaeological Museum, which certainly deserves a visit. 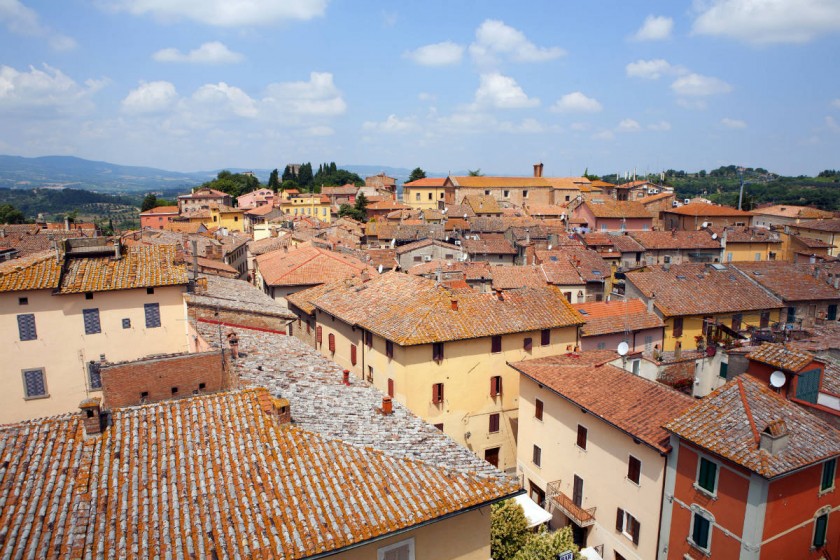 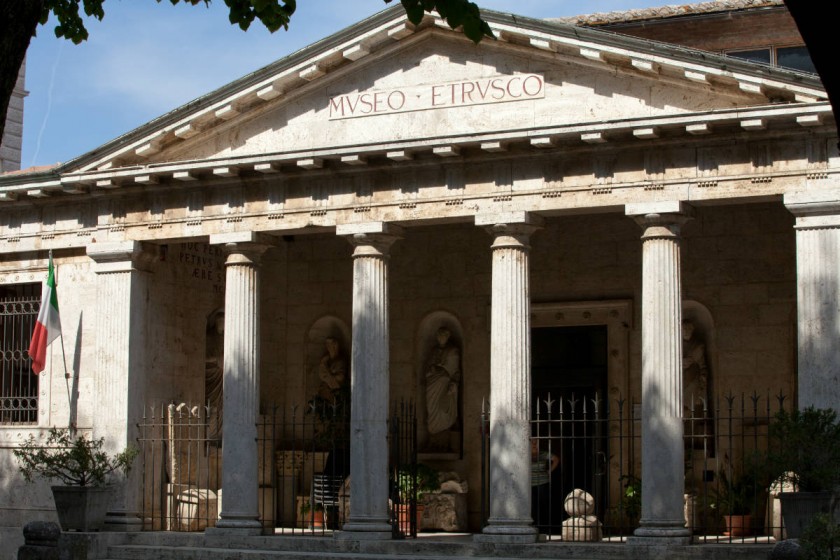 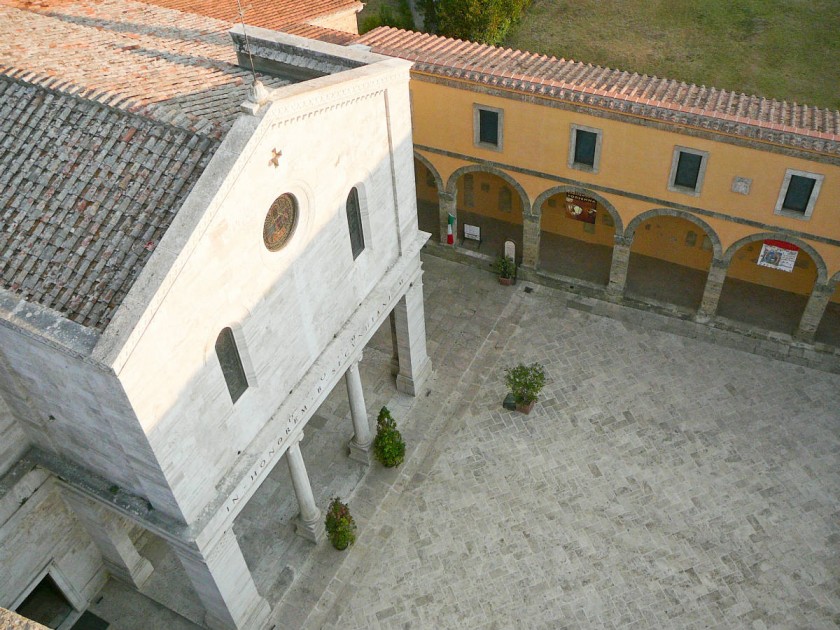 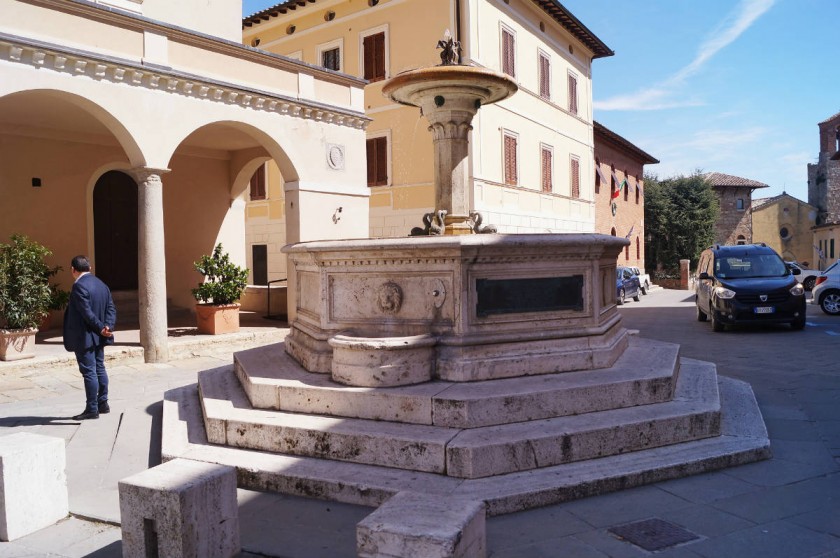 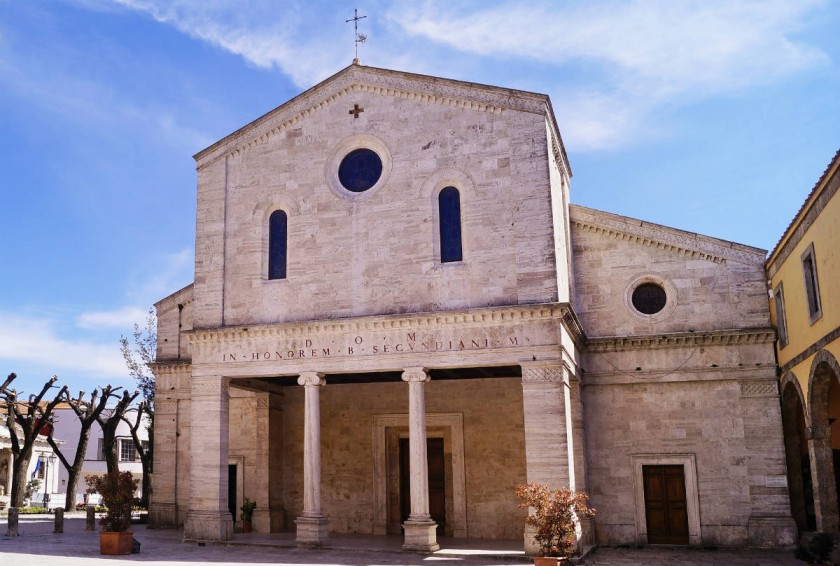 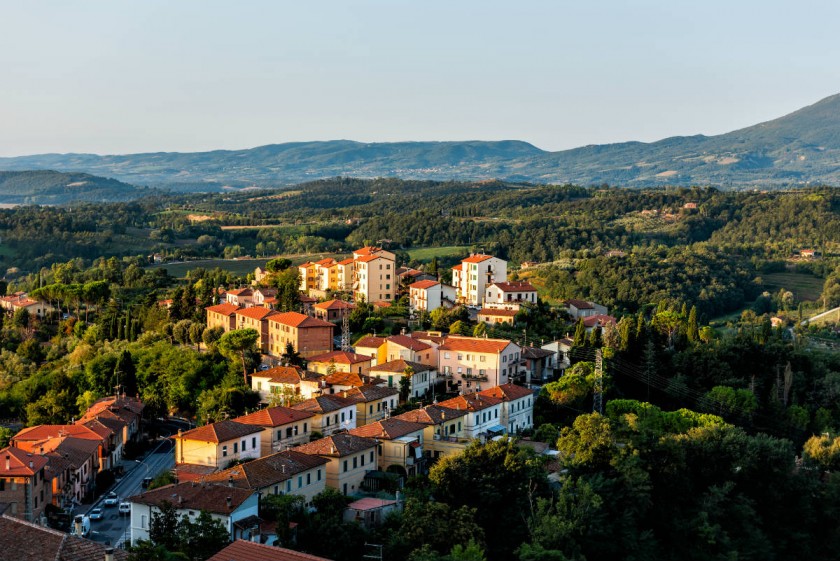 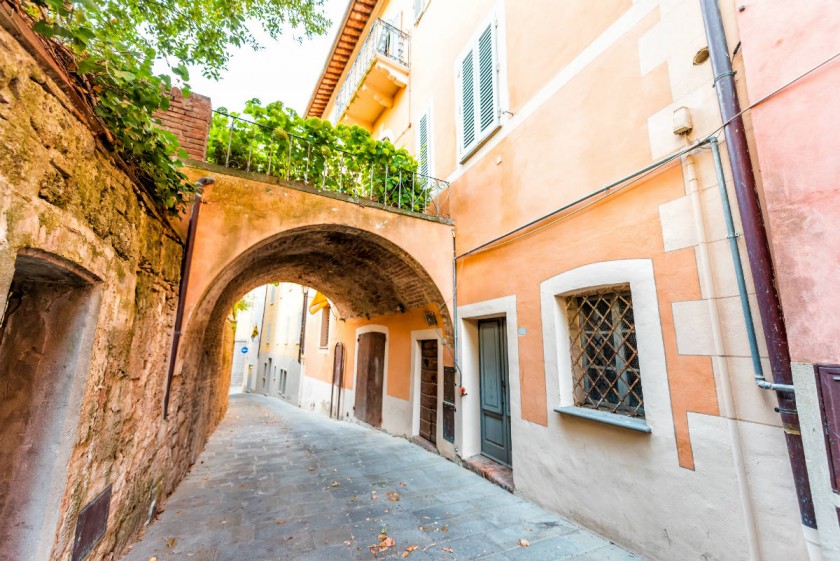 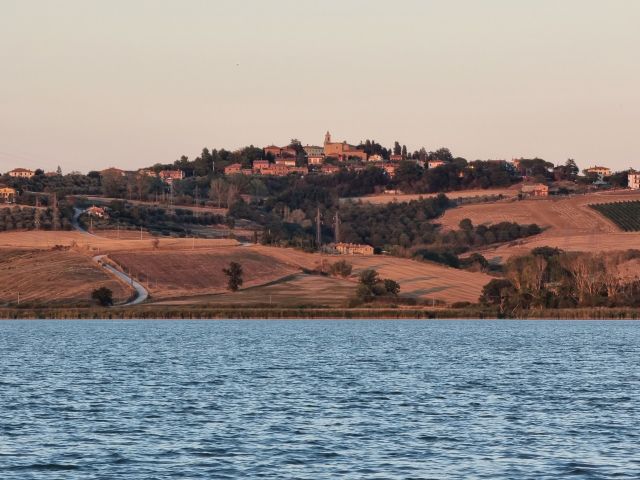 On the border with Umbria, in the province of Siena, there is the ancient village of Chiusi.
The first archaeological evidence consisting trace the first settlement in the area in the Iron Age, with rich funerary objects from the VIII century B.C. the Etruscan city of Clevsi, became the Latina Clusium (Klysion Κλύσιον, in ancient Greek), had a fundamental importance, since located on the artery that connected Rome to the northern Etruria, following the Tiber and its main tributary the Clanis, being the valley bottom of the homonymous valley extremely fertile. The summit of his power lies at the end of the VI century B.C. when, under the guidance of King Porsenna, besieges and controls for a short period, Rome. In 89 B.C., with the extension to its inhabitants of Roman citizenship, Chiusi enters fully into the political orbit of Rome. Its prosperity continues even in the Imperial Age, during which Chiusi-Clusium remains an important transit point on the via Consolare Cassia and river Clanis, then navigable to the Tiber. From the III century A.D. the city became an important center for the spread of Christianity, as witnessed by the catacombs of Santa Mustiola and Santa Caterina and the Cathedral of S. Secondiano. In the following centuries closed is also the seat of a Lombard Duchy, after which begins a long period of decadence. The time most critical of its history coincides with the swampiness of Chiana Valley and only in the nineteenth century the complete reclamation of the valley the returns importance.

Chiusi is famous for the splendid Etruscan remains, innumerable excavations have brought to light findings are unique in the world, such precious testimonies are exposed at the National Etruscan Museum of Archeology, which certainly deserves a visit. The museum is articulated in three sections in which it traces the history of Chiusi through the exposure of numerous archaeological masterpieces, vases, terracottas and funerary sculptures. Between the Etruscan tombs, most remarkable are the tomb of the pilgrim, the tomb of the Monkey, the Pania and the tomb of the Lion. Not many years it has been opened to the public an interesting route, the so-called maze of King Porsenna, an intricate system of underground passages of the Etruscan Age, and that passing through the subsoil of Chiusi, leads to a monumental cistern dating back to the I century AD. Of the first Christian age are the catacombs of Santa Mustiola and Santa Caterina.

In front of the Archaeological Museum there is Piazza del Duomo, monumental heart of Chiusi. The Cathedral was built in the XII century and and next to it there is the Museum of the Cathedral which preserves important finds, between which the precious manuscripts Benedictines. To the left of the Cathedral there is the tower of San Secondiano, built in the XII century and transformed into a bell tower in 1585. From Piazza del Duomo we can follow the ancient Decuman (via Porsenna), along this way are some interesting buildings among which: the palace Bonci Casuccini, former Fanelli palace, today Baldetti, of the XV century and the Palazzo Della Ciaia of the XVI century. Continuing in via Arunte it then comes to the Prato from which you can enjoy a beautiful panorama, from here you can catch a glimpse of the Fortress of the XII century, today private property. Taking Via Paolozzi you arrive at the church of San Francesco with the adjacent convent with a beautiful cloister, you then enters piazza XX Settembre where are the Palazzo Comunale, the Clock Tower and the Logge, in addition to what we find the Church of Santa Maria of death. The city walls, largely demolished to reuse the stones or during the second world war, they remain only some sections between which a single gate (Porta Lavinia) of three that there were originally.

Situated in the extreme south of the province of Siena, at the border with the Umbria and next to that with the Lazio, Chiusi is the perfect destination for all those who want to immerse themselves in history, but it is also a simple land, generous and rich of traditions. The city derives from the etruscan city of Chamars, rich and powerful under the reign of Porsenna.
The Cathedral of St. Secondiano, built by Bishop Florentinus in the half of the VI century, is one of the oldest churches in Tuscany. Remodeled several times over the course of the centuries, it still preserves the original architecture of the Paleochristian basilica. The statue of Saint John the Baptist of the imposing baptismal font is attributed to Sansovino.
The Cathedral Museum collects material of great value of the early Christian era, medieval and modern, even if his fame is linked mainly to collection of the splendid Benedictines dicodici miniati, of the second half of the fifteenth century, from the Abbey of Monte Oliveto Maggiore.
From the museum we go down to the Labyrinth of Porsenna, grating of tunnels, for tradition burial of the great Etruscan king, in reality the rest of the aqueduct that crosses the village reaches the tank under the bell tower of the duomo. The visit ends in the bell tower, from whose top we can admire a splendid landscape.
Just a few kilometers from the historic center, you will find the lake of Chiusi, one of the more interesting passage points along the "Trail of the Reclamation".

Village of Chiusi
The Municipality of Chiusi

Concattedrale of San Secondiano
The Concathedral of San Secondiano, in the village of Chiusi, is characterized for its isolated b...
Via Porsenna, 89, Chiusi
The Museum of the Cathedral and the Labyrinth of Porsenna
The name derives from the description of Plinius the Elder of the mausoleum of Porsenna, the lege...
Piazza Duomo, 2, Chiusi
Chiusi National Archaeological Museum
With the ticket of the Archaeological Museum of Chiusi you can also visit the tomb of the Lion, t...
Via dei Longobardi, 291, Chiusi
Church of St. Martin in Foro
The Church of St. Martin in Foro of the village of Sarteano Tuscany, stood in the main square of ...

Piazza Luigi Pecori, 1-2, San Gimignano (Siena)
88.80 Kilometers from Chiusi
The collegiate church of Santa Maria Assunta
The primitive church was built inside the Castle of Casole, a village that drew its wealth from b...

Piazza della Libertà, 32, Casole d'Elsa (Siena)
81.78 Kilometers from Chiusi
Palazzo Pretorio
In the middle of the road that connects the imposing fortress to the Collegiate Church of Santa M...

Find where to sleep in Chiusi

Via V. Emanuele, 91, Castiglione del Lago (Perugia)
14.96 Kilometers from Chiusi
Lupaia
An agritourism resort in the heart of Tuscany, between Pienza Montepulciano. La Lupaia is a luxur...

Località Lupaia, 74, Torrita di Siena (Siena)
19.28 Kilometers from Chiusi
Lupaia
An agritourism resort in the heart of Tuscany, between Pienza Montepulciano. La Lupaia is a luxur...

Via Berignano, 76 - 53037, San Gimignano (Siena)
88.71 Kilometers from Chiusi
Battilani Sapori
In the gastronomic paradise of Umbria...

Travel proposals in Chiusi and in its territory

Explore the cellars of Brunello di Montalcino - from 160 €
Sip one of the most important wines in Italy and explore the wineries where it is produced
| Travel proposal valid until: Saturday 31 december 2022
full day | June to December 2022 | Max: 8 people
Interested villages: Montalcino
A Vespa tour from Siena with lunch at a winery in Chianti - from 129 €
Set off from Siena on a Vespa scooter and enjoy splendid views of the rolling hills, vineyards and olive groves of the Tuscan countryside.
| Travel proposal valid until: Monday 31 october 2022
Approx. 8 hours
Interested villages: Monteriggioni, Radda in Chianti
Hot air balloon flight over Tuscany from Siena - from 290 €
Enjoy aerial views of the Tuscan countryside during a 1 hour hot air balloon flight
| Travel proposal valid until: Saturday 31 december 2022
3 hours | Valid all year round | Max: 6 participants

The Way of Etruria: from Volterra to Chiusi, 12 exciting stages in the footsteps of the greatest pre-Roman civilisation
When one thinks of the great civilisations of Italy's past, the Romans immediately come to mind; yet not everyone knows that this glorious people, who dominated the world for centuries, drew much from another civilisation that excelled on Italian soil: the Etruscans. They occupied a vast territory stretching from the river Arno to the Tiber, encompassing the current regions of Tuscany, Lazio and Umbria. They founded eleven major centres that f...
Continue
Unique Tuscan villages to Love - Download a free travel guide to the 51 certified Tuscan villages
It has recently been made available a free travel guide by Toscana Promozione Turistica, in Italian and English, about 51 Tuscan villages certified in the Borghi più Belli D'Italia, Paesi Bandiera Arancione, Mibact's Gioielli d'Italia and UNESCO World Heritage Sites. The volume, edited by Claudio Bacillieri, director in chief for Borghi Magazine, accompany th...
Continue