Share
A small medieval village in the Val d'Elsa located in a dominant position on a hill, disputed since the early 1200s first between Volterra and Siena, then involved in the war between Guelfi and Ghibellini. After a year of Florentine rule, Casole was definitively admitted to the domains of Siena. Its appearance as a medieval village reveals its soul of disputed land, with the walls and the Rocca Senese in relief, now the seat of the municipality. 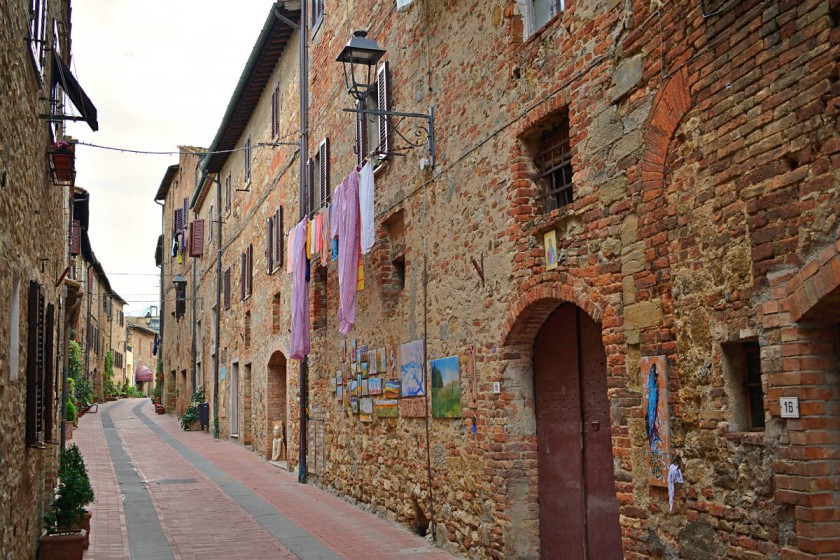 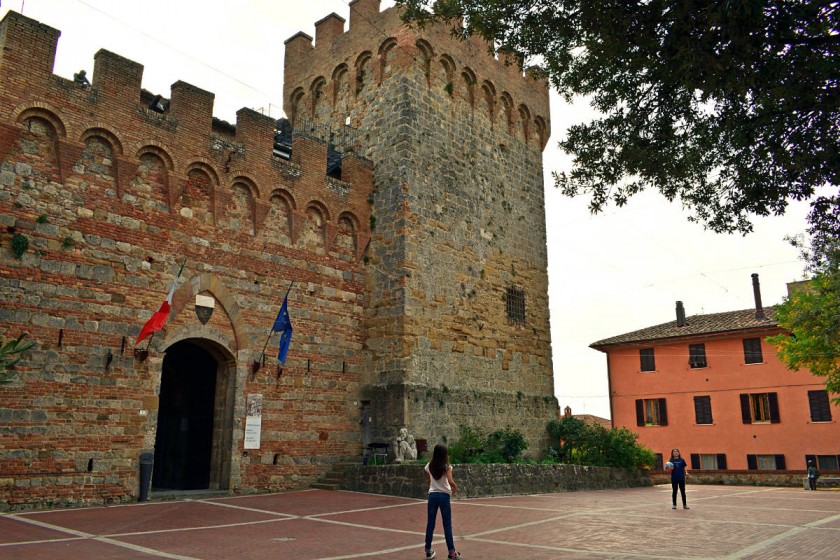 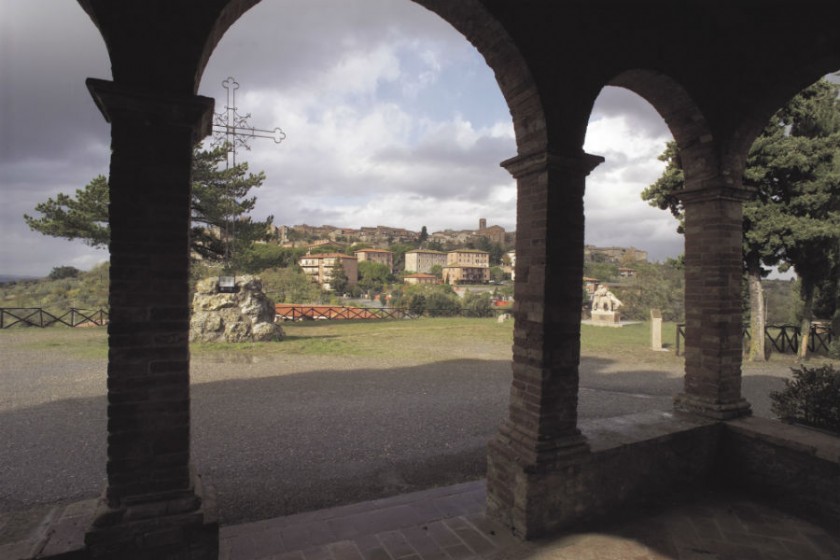 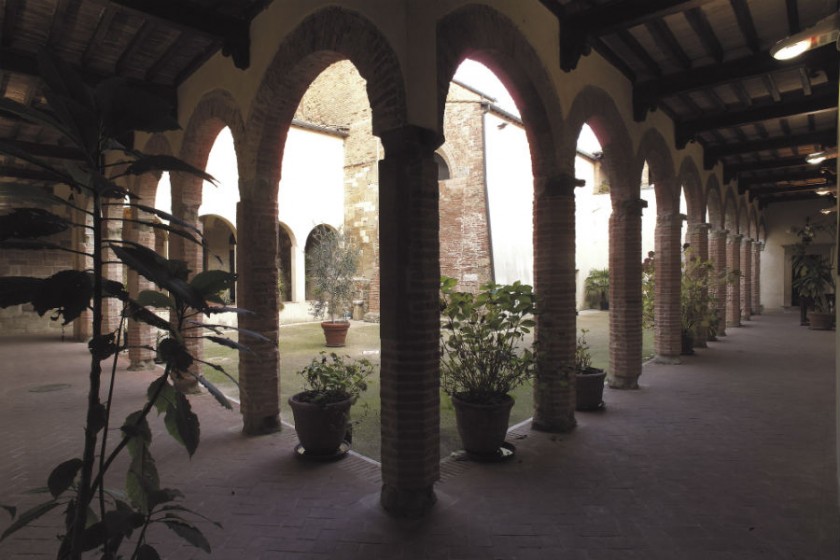 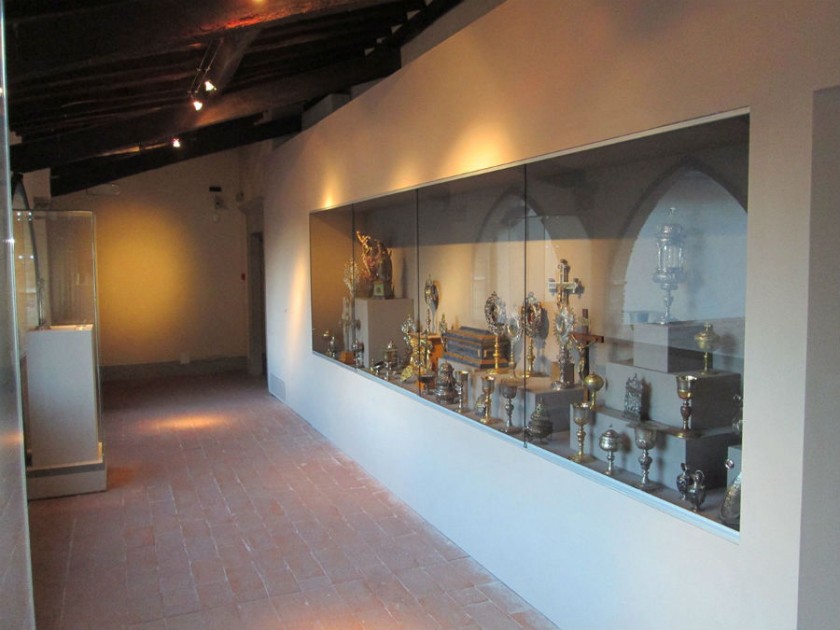 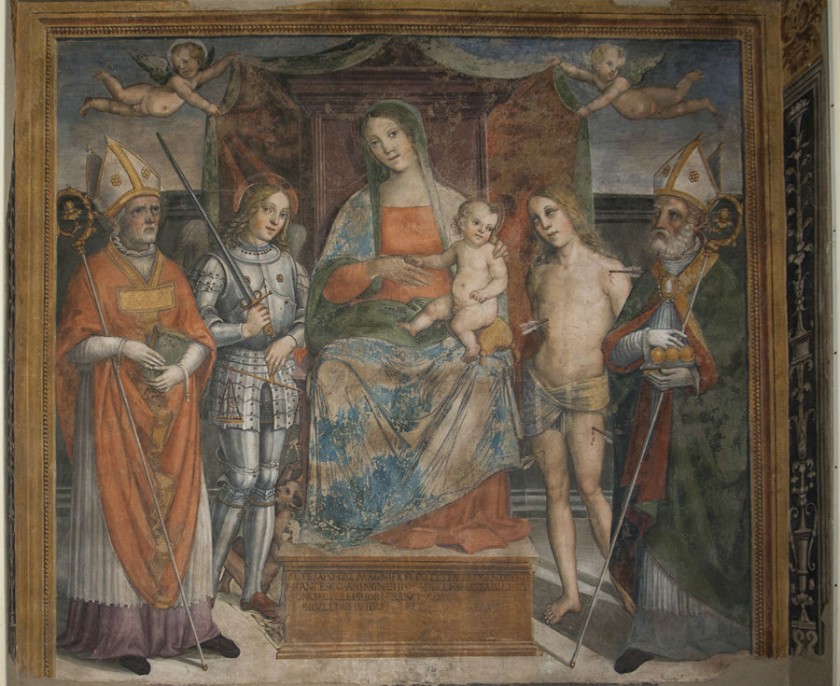 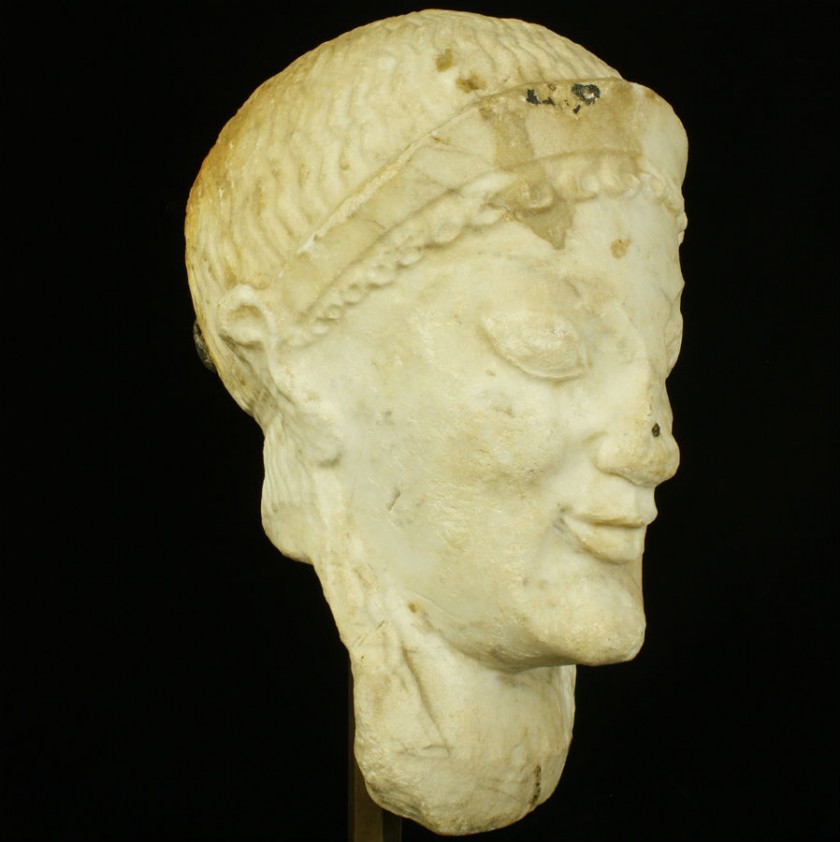 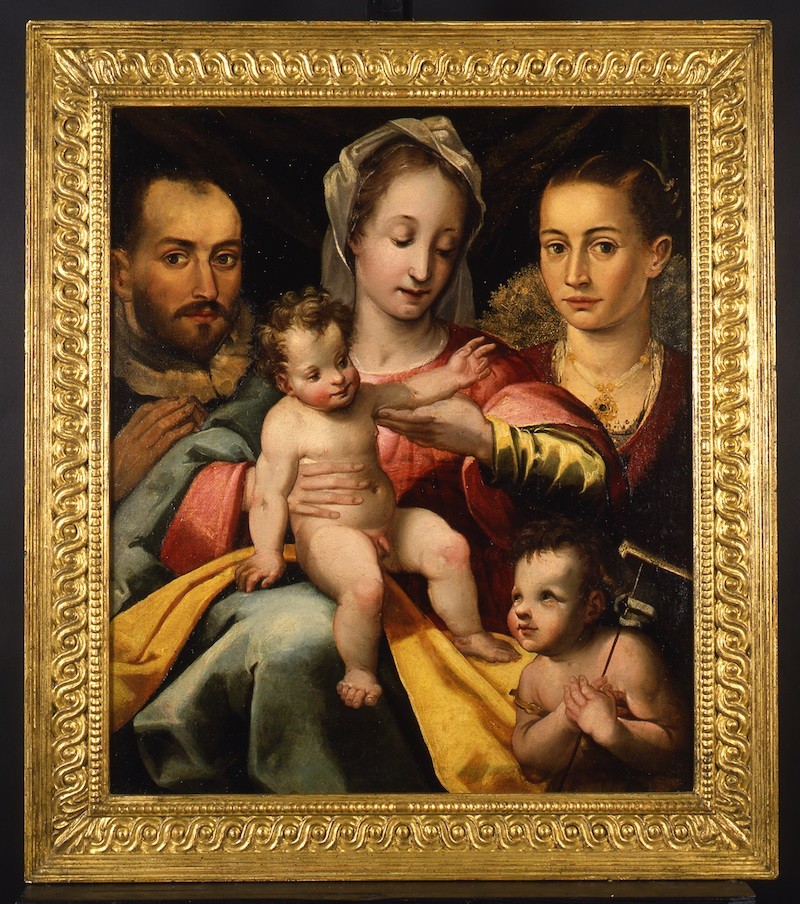 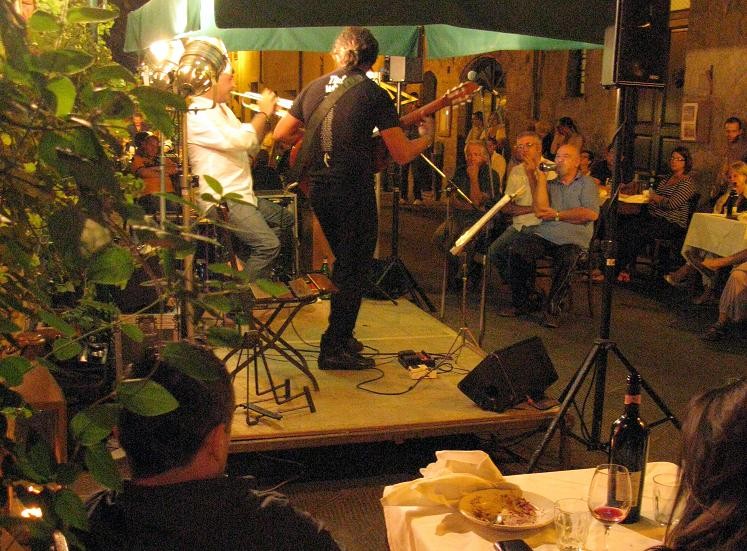 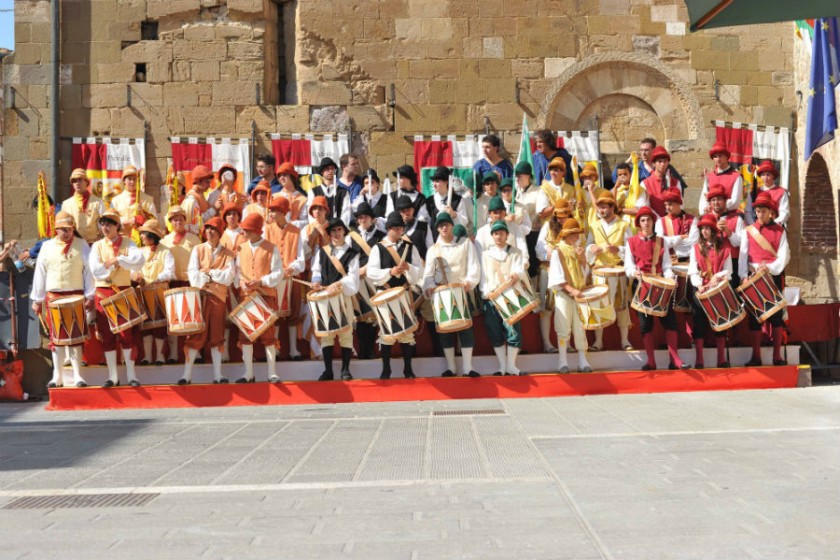 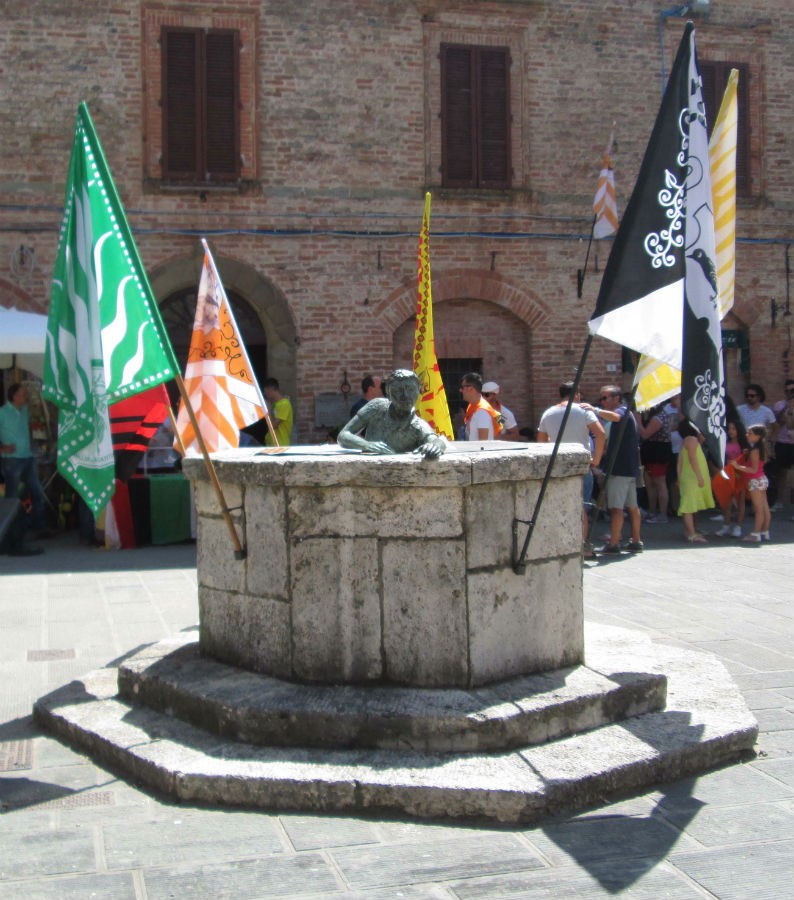 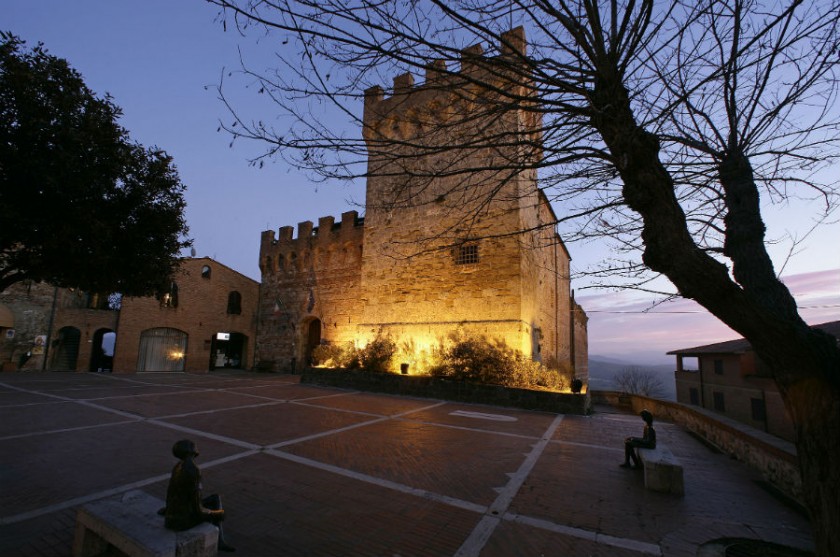 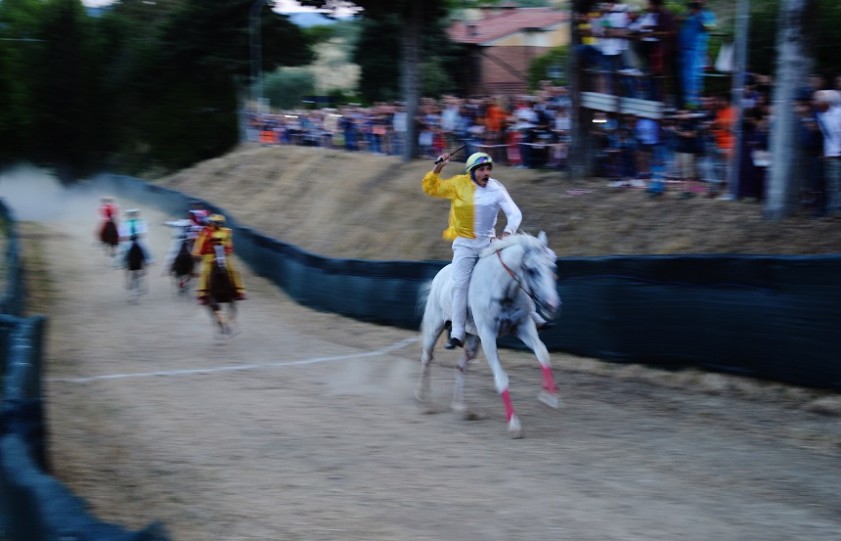 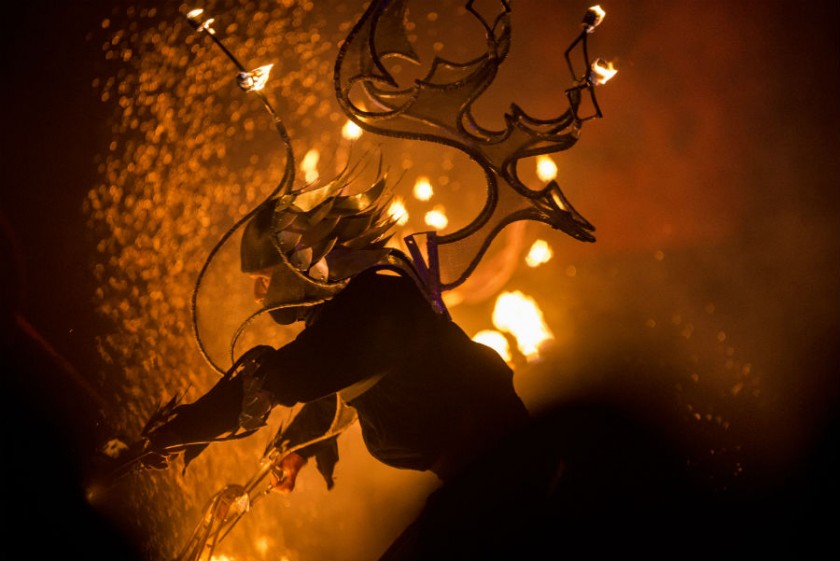 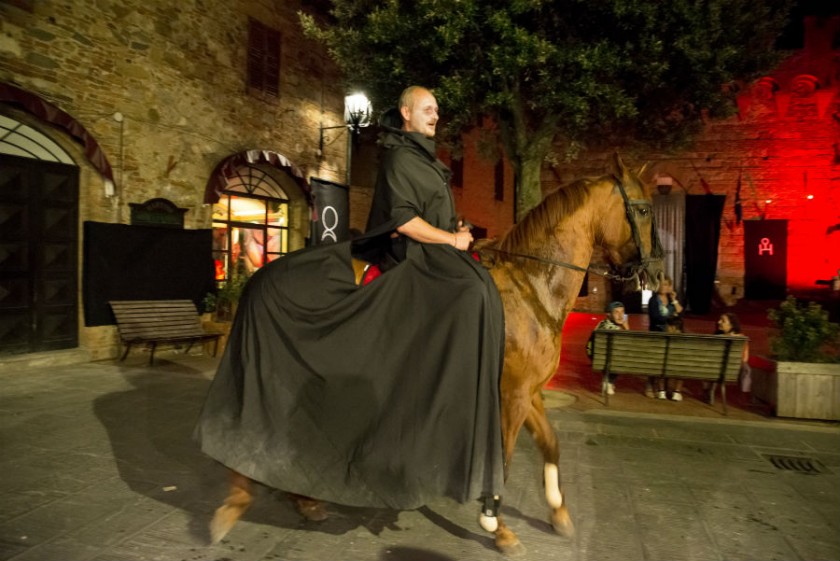 A look at Casole d'Elsa

The territory of the present hamlet of Casole d'Elsa, Tuscany, has been an important place since the primordial times not only for the exploitation of natural resources, but also for the location along important communication routes between the various areas of the Tuscany center -west and inward penetration. It rises on the first propaganda of the Metallifere Hills, lapped by the rivers Cecina and Elsa and framed by the massif of Montagnola Senese.

The first secure traces of human resources date back to the Neolithic age. If the age of the Bronze Age, characterized by the beginning of exploitation of the mineral resources (copper) in the area of ​​the Metallifers Hills, is poorly attested, the Iron Age (IX-VIII century BC) assumes more defined characters. With orientalisation (VII century BC) and above all with the archaic age (VI century BC), we witness the emergence of small local potentates living on farms spread across the territory and gaining wealth from the ferocity of the soil and the control of the communication paths. With the Hellenistic age (the second half of the IVth-beginning of the 1st century BC), the hegemonic role of Volterra is increasingly evident. Casole is attested by the first decades of the XI century as an important castle. Early references to the establishment of two consuls of Casole date back to 1208, while, a few years later, castellanza pacts again linked the Colle and Casole communities, the latter represented by the figures of two rectores societatum. Despite the articulated imperial privilege of Frederick II of Swabia (1224), which recognized and legitimized the interference of the volcano bishops with regard to the nomination of the rector or consuls of Casole, as well as of other Valdelene towns, in the middle of the century now completely structured, with a podestà, a council, a college of "elders" and, presumably, already with its own statutory elaboration.

Over the course of the 13th century, Siena's interference increased steadily, under whose domain Casole passed after the victory of Montaperti (1260). The village was home to the ancient church of Santa Maria Assunta, whose first certificates date back to the XI century. The primitive church, enlarged and reconstituted in solemn forms in 1161, would have known a substantial alteration of the structure and a further rise and expansion between the end of the 13th century and the early 14th century. The church and its cloister were the seat chosen for the conclusion of acts of salient importance for Valdelian history. During the last twenty-two years of the 13th century some important figures were distinguished in Casole, socially and patrimonially attributable to rulers holding majestic domination forms, leading members of the ecclesiastical aristocracy, interpreters of excellence in an elite juridical culture derived from studies of canonical and civil law, frequentors of various degrees of the papal court, but always with roles of absolute importance.

In 1313, on the occasion of the descent into Italy of the army of Arrigo VII of Luxembourg and the concomitant rebirth of the powers of power and autonomy that peculiarly characterized the aristocratic components of philosophical and neo-ghibelline faith in the Tuscan municipalities, Casole rebelled Sienese government and received an important imperial garrison on the initiative of the dominion Ranieri, son of Porrina, supported by the Ghibelline faction of the castle, to which the Andrei also belonged. The following year however, following the substantial failure of Henry VII's intervention in Italy, he found the subordination of Casole to Siena fully reconfirmed, as evidenced by a large and articulated stipulation between the two communes (April 1314). Ranieri del Porrina, banned with his son, was exiled to Pisa, the stronghold of Ghibellinism in Tuscany. From the 16th century the events of Casole follow those of the Grand Duchy of Tuscany and therefore of the new Italian State.

Worth a visit are the parish church of the Collegiate Church and the adjacent Palazzo della Prepositura which houses the Museo Civico Archeologico and Collegiate Church, first among the museums of sacred art of the sienese area. Leaving the museum located in the heart of the historic center, next to the Parish Church, today the Collegiata Church and along the main street (Via Casolani) toward south, meets the Palazzo dei Priori which has an interesting facade enriched by numerous coats of arms of the podestas, priori and captains of the people who in the centuries amministrarono this castle. Inside there is a collection of Sienese art of the Twentieth Century (visits on request). Later instead there is the Rocca, a typical structure Sienese military erected in the middle of the Fourteenth Century, inside has the seat of the Museum of the city: here is told through a series of graphic reconstructions, the ancient settlements in the territory, the various construction phases of the castle and the original appearance of the historic buildings (free entrance). In concluding the visit to the historical center deserves a pass the two circular towers built in 1481 in the eastern perimeter of the circuit medieval masonry by Francesco di Giorgio Martini, the greater military architect of the Renaissance.

The vast territory that surrounds the ridge on which is perched Casole d'Elsa, was inhabited since antiquity, prove it numerous archaeological discoveries, among which we have two monumental tombs in the locality of Mucellena and Agresto, The hypogea are visitable. To the medieval era date back several buildings of cult, appreciable for an early update on the art Romanic Pisana, that filtered through the yards of Volterra, was irradiated in the hinterland valdelsano as in the case of the Parishes of Mensano, Pievescola and Marmoraia. There are many ancient castles including Mensano, Gracciano and Querceto, which still today, even if largely processed, documenting the vitality and the strategic importance of a border territory between Volterra Siena and Florence. The writer Carlo Cassola has set in the hamlet of Gracciano his novel La ragazza di Bube.

Bypassing rumps and hills of the Elsa valley, just defiladed from via maestra from Colle in Volterra, we can meet the ancient Castle of Casole d'Elsa, in its own way the prototype of all Tuscan villages, no aspect excluded. Visible immediately at the reaching of town, here's part of the boundary of Murata on which intervened in the XV century with two strong towers, the famous military architect Francesco di Giorgio. In the beautiful square it stands Palazzo of the Propositura, seat of the civic museum of archeology and the Collegiata. Walking through the historic center, harmonious and lively, we stop in different shops of typical local products. We let ourselves, finally, fascinate by numerous contemporary art installations. In the main street are the Palazzo Pretorio, with its beautiful parade of coats of arms on the facade and the Rocca, today the seat of the Town Hall and the Museum of the city. Within the latter, we reach the small tower to enjoy its privileged panoramic point and admire from there the hills and valleys of the surroundings of incomparable charm, and the whole village, with its farmhouses and its churches, among the most beautiful of the Sienese countryside. We go up to the fraction of Gracciano, traveling in time and in the places in which the writer Carlo Cassola has set his novel The Girl of Bube. The second Sunday of July, the citizens of Casole involve us with passion and commitment in the celebrations of the Palio, lower than that of Siena only by fame.

The Palio is a tradition historical cultural entrenched and consolidated by centuries in the territory of the province of Siena. This event recalls, in fact, circumstances, customs and ways of being of the people of the Tuscan countryside the mid 1800's, period to which date back testimonials certain, even if the origins may have roots more remote. The celebrations, which concluded with a horse race, took place annually, in honor of Sant'Isidoro, holy farmer, to strengthen the agricultural vocation of the municipal territory.

The Palio was played by the most important agricultural plots of then (splintering, D'Albertis, Querceto, Gracciano, La Pergola, etc.) which represented in fact the whole village. The event, which had timely continuity, was interrupted at the end of the Sixties, in consequence of the depopulation of the countryside for a strong migration toward the industrious neighboring towns. In this period the casolese population in fact passes from 5 thousand units of the early twentieth century to 2500 inhabitants. However, the people remained the spirit of tradition was never faded and in 1976 regained her new life, which he revived the feast. In the face of a changed social reality was also born a new regulation and the farms were replaced by new entities representing portions precise municipal territory. Thus were born the districts of Rivellino, Pievalle, the blackbird, Cavallano, Gracciano and Casole Campaign.

From there onwards the Palio has regained the continuity that was interrupted for about twenty years and it is characterized by an increasing participation of the population which has riabbracciato with great enthusiasm the old tradition. Today the district are well inserted in the social fabric casolese, well structured and carry on an activity that goes beyond the day of the feast, even if found the highest expression on that occasion.

Via Paolo Mascagni, 43, Pomarance (Pisa)
14.47 Kilometers from Casole d'Elsa
Lombroso Museum
The former asylum in Volterra is now open to the public on a regular basis.

Find where to sleep in Casole d'Elsa

S.P. Monte Volterrano, 8, Volterra (Pisa)
16.90 Kilometers from Casole d'Elsa
Lupaia
An agritourism resort in the heart of Tuscany, between Pienza Montepulciano. La Lupaia is a luxur...

Travel proposals in Casole d'Elsa and in its territory

Our news about Casole d'Elsa

Casole d'Elsa: the open-air museum in the heart of Tuscany
Two Lovers © Visit Tuscany Between the provinces of Florence and Siena stretches the beautiful Val d'Elsa, one of the most iconic places in the Tuscan region. Crossed by the Via Francigena, the Val d'Elsa holds within its territory historical and artistic testimonies of immense value, often enclosed within the walls of medieval villages. San Gimignano, Certaldo and Monteriggioni are just a few of the must-visit places in Val d'Elsa. Then...
Continue
Unique Tuscan villages to Love - Download a free travel guide to the 51 certified Tuscan villages
It has recently been made available a free travel guide by Toscana Promozione Turistica, in Italian and English, about 51 Tuscan villages certified in the Borghi più Belli D'Italia, Paesi Bandiera Arancione, Mibact's Gioielli d'Italia and UNESCO World Heritage Sites. The volume, edited by Claudio Bacillieri, director in chief for Borghi Magazine, accompany th...
Continue