Share
Celle Ligure is a small jewel of the Western Ligurian Riviera, overlooking the sea. The village has colorful houses lined up along the coast, sandy beaches and characteristic alleys overlooked by buildings of great artistic value, including Palazzo Ferri, the current Town Hall. Its historic center still retains the charm of the ancient fishing village. To fully enjoy the beauty of the country, there is nothing better than getting lost in the alleys and squares.

A look at Celle Ligure 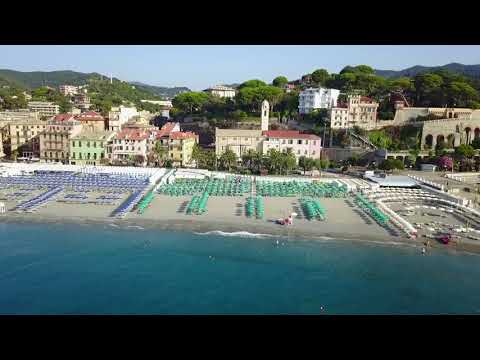 The origin of the village of Celle Ligure may be traced back, at least in its primitive dislocation, located more inside respect to the current urban center, approximately at the XI century. Only later, it has been founded the current historical village along the coast where there were only the huts used as boat deposits and seafaring equipment. From here the name cellae.
The life of Celle Ligure had throughout the Middle Ages the common events to neighboring countries, at least until the ancient Marca Aleramica, in which these lands were included, tear apart in various domains. According to the documents of the XII century, were the Marquises of Ponzone to have, for almost two centuries, the dominance on Celle Ligure; they underwent, due to weddings, consular families Genoese: before the Malocello (XIII century) and then the Doria. Passed to the domain of Genoa in 1343 cells obtained the concession by the Doge Simon Boccanegra to join in a Podesta office, with the countries of Varazze and Albisola. Among other concessions, the three communities were free to manage their goods through municipal statutes: the Celle's one, of 1414, was popularly called the Negrin. The popular government lasted until 1798, the year of the fall of the Republic of Genoa. The current cell is a small jewel overlooking the sea, arranged in a harmonious creek of Riviera Ligure di Ponente and characterized by two sandy beaches on which sweetly degrading the hills, rich of pines, olive trees and crops. The extremely mild climate, the extension of its beaches of fine sand, appreciated already from the first tourists who came to the resort at the end of the Nineteenth Century, have favored cells the birth of a touristic vocation, that the country has maintained and increased up to obtain important awards. Two souls coexist in this small village. The village of Celle Ligure is in fact divided into two distinct parts: the Plans, placed to east, modern, rich in hotels, villas, sports equipment and the area structured around the historical center, ancient village of fishermen, with small colored houses, aligned along the shore and the caruggi, on which overlook buildings of high quality and artistic value, including the Palazzo Ferri, current Town Hall. A green and flowery walk more than a kilometer, perfectly integrated in the historical context, winds to merge, along the littoral, the old village with the plans. Behind runs, on the promontory of the Crocetta, a stretch of the ancient route of communication with neighboring countries, today splendid walk said Romana, where you can enjoy an incomparable panorama of the Riviera: the crystal blue of the sea, the green of the hills, the red and the slate roofs. The extremes of the country, two pinewoods (Bottini Park in the west and the Natta Park levante) allow pleasant excursions and stops in the coolness, in addition to representing privileged panoramic observatories. From the coast it is possible in a short time, to penetrate through a dense network of roads and paths in the surroundings of the hinterland to discover medieval villages and remains in the stone of ancient buildings, as well as the signs of an original popular religiosity testified by numerous churches and oratories. Certainly deserve a visit the Oratory of the disciplined, Church of Our Lady of Consolation with the Augustinian Convent and the Church of Santa Maria Assunta, in the locality of floors. The Oratory of San Michele, indicated as disciplinatorum domus in the documents of the second half of 1500, is originally consisting of a single rectangular hall is simple and essential, with a presbytery stuccoed only in the Nineteenth Century. It retains a San Michele Arcangelo crate polychrome wooden by Maragliano (1694). The Church of Our Lady of Consolation, was built in the XV century by the Community cellese. Was entrusted to the Augustinians in the XVII century and purchased by the same in 1904. The facade was redone in neo-romanesque style, while the interior has been made to a single nave in 1725. The Church of Santa Maria Assunta, much more recent (1950), preserves inside a balustrade and a holy water stoup of color turquoise signed by Emanuele Luzzati; on the facade stands a large high relief of the Master Lucio Fontana, the Assunta and the Archangel Michael stabbing the Dragon. Also include, in the locality of Roglio and Cassisi, two fortress-houses: robust construction to a square base, with cabins for the sentinels, which in the past assolvevano the function of defense and shelter of the villagers during the attacks of piracy. The two majestic towers with a square floor plan, instead, (the greater is that of "Bacci", the other is the "Camilla") located in the locality of Cornaro, were part, as guard towers on the sea of the defensive system of the village of Celle Ligure.

the Municipality is part of:
Bandiere Blu

Parish Church of San Michele
The church of S. Michael is one of the first appearances built on place. The distance from the se...
Piazza S. Michele, 2, Celle Ligure
Mount Ursino Castle
The Mount Ursino Castle rises in defense of the historic center of Noli, in Liguria.

Via Lancellotto, 3, Finale Ligure (Savona)
25.40 Kilometers from Celle Ligure
Valdemino Caves
The Valdemino Caves are a cavities complex near the village of Verezzi, in Liguria.

Miramare Hotel
Just steps from the historic center and the beaches of Noli, the Miramare Hotel will seduce you w...

Via Aurelia 35, 17026, Noli (Savona)
18.60 Kilometers from Celle Ligure
Hotel Capo Noli
In a strategic position, directly on the sea, overlooking the natural Gulf of Noli, the Hotel Cap...

Via Colombo 101-17026, Noli (Savona)
18.43 Kilometers from Celle Ligure
Ristorante A Topia
In the heart of the village Verezzi.

Via Roma 16, Borgio Verezzi (Savona)
26.92 Kilometers from Celle Ligure
Pasticceria Scalvini
The choice of prime ingredients and the faithfulness to the best recipes of the bakery tradition...

Via Cristoforo Colombo, 3 - 17026 , Noli (Savona)
18.33 Kilometers from Celle Ligure
Martini Tobacco Shop 1937
This famous tobacco shop was established back in 1937. The passion for tobacco has been passed al...

Via Dante,65 - 17053, Laigueglia (Savona)
50.83 Kilometers from Celle Ligure
Opiﬁcio di Verezzi
The factory is located in the main street of the wonderful village of Verezzi.

Passeggiata C. Colombo - 17053, Laigueglia (Savona)
50.44 Kilometers from Celle Ligure
Le Palme bathing establishment
If you want to enjoy a relaxing and peaceful beach holiday, this is the place for you.