Share
Medieval town, the historic center of Correggio still appears well preserved today. Corso Mazzini is the main street of the center, flanked on both sides by paved porticoes in Verona marble. Among the main monuments of Correggio there is Palazzo Principi, started in 1507 under Francesca di Brandeburgo, widow of Count Borso.

A look at Correggio 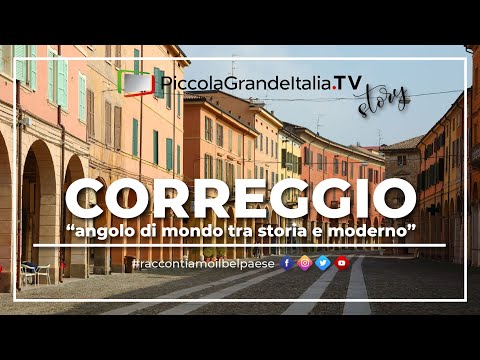 Already inhabited in Roman and Lombard times, Correggio was a fief from the 11th century of the family from which it took its name: the Da Correggio, who between the 16th and 15th centuries rivaled Visconti and Este, also becoming lords of Parma for a short period.

The name Correggio (Curèš in the Correggio dialect, Curèz in the Reggio dialect), according to legend, derives from the progenitor of the Da Correggio, who during a battle was seriously wounded near the "corrigia" (belt) and was saved thanks to the intervention of the Madonna . Hence the Latin term corrigia o corrigium, which means "strip of leather".

The historic center of Correggio is still well preserved today and it is possible to admire the Basilica of San Quirino, built between the first and second half of the '500.
Corso Mazzini is the main street of the historic center, flanked on both sides by Verona marble paved porticoes.
Among the main monuments of Correggio there is Palazzo Principi, begun in 1507 under Francesca di Brandeburgo, widow of Count Borso, and Eretto designed by Biagio Rossetti.

Next to the palace is the neo-classical Theater named after the recently restored musician Correggese Beato Asioli.
Not far from the center, in Via Roma, there is the Church of St. Francis built in 1470 and currently not open to the public.Not far away is the church of S.Chiara (1666) and the church of S.Sebastiano, also not open to visitors inside, built next to the Convitto complex.

From 1009 to 1635 the Lordship of Correggio developed. In 1452, when by then his lords had had to resign themselves to the ancestral territories and were therefore primarily interested in strengthening themselves juridically and diplomatically in them, Emperor Federico III recognized the title of Conti from Correggio, also delimited the lands and boundaries of the Committee by submitting it directly to the Empire.
Then began the period, lasting about a century, of greater fortune of the city and its Lords. The center of attraction of the political and social life of the County was represented by the Court, which was the seat of diplomatic and cultural activity of great importance.

There were guests Ludovico il Moro, Ariosto, Bembo, il Molza, Bernardo Tasso, and many others among the most important artists and lords of the time. The same local representatives of politics and culture were of the highest level: Nicolò il Postumo, Veronica Gambara, Rinaldo Corso, Claudio Merulo and, above all, Antonio Allegri.

On May 16, 1559, Emperor Ferdinand I of Hapsburg raised Correggio to the rank of City, conferring, at the same time, the privilege of beating money and maintaining a Catalog of the city's nobility. In 1616 it was built in Principato. In 1635 Prince Siro da Correggio was accused of beating false money and therefore was deprived of its territories, which were annexed, a few years later (1641, confirmed in 1659), in the Duchy of Modena and Reggio.

the Municipality is part of:
Unione Pianura Reggiana

Jesi Palace
Samuele Jesi, one of the best Italian engravers, was born in the homonymous palace, located in th...
Corso Giuseppe Mazzini, 8a, Correggio
Archaeological park and open-air museum of the Terramara di Montale
The archaeological park of Montale, in the hamlet of the municipality of Castelnuovo Rangone, is ...

Corso Giuseppe Mazzini, 8, Correggio
Il Correggio Restaurant
In the beautiful internal courtyard of the ancient Jesi palace of Corso Mazzini, there is the res...

Correggio (Emilia Romagna), birthplace of the artist Luciano Ligabue
It is in the heart of what is called the Food Valley that Correggio is spreading. Reference center of the Union of Municipalities of the Plains of Reggio Emilia, it is a center with medieval origins linked to the Lombard domination. Elevated to the rank of city in 1559 by the emperor Ferdinand I of Habsburg, to which he ...
Continue