Share
A hilltop village in the shape of a bunch of grapes, Castelnuovo Val di Cecina is characteristic for its architectural homogeneity, the narrow and winding alleys paved with stone, the medieval doors, the views of the valley. From here, nature trails start that reach places of historical interest, such as the bridge over the Pavone stream, or panoramic views from which you can admire the Cornia Valley and the Gulf of Piombino. 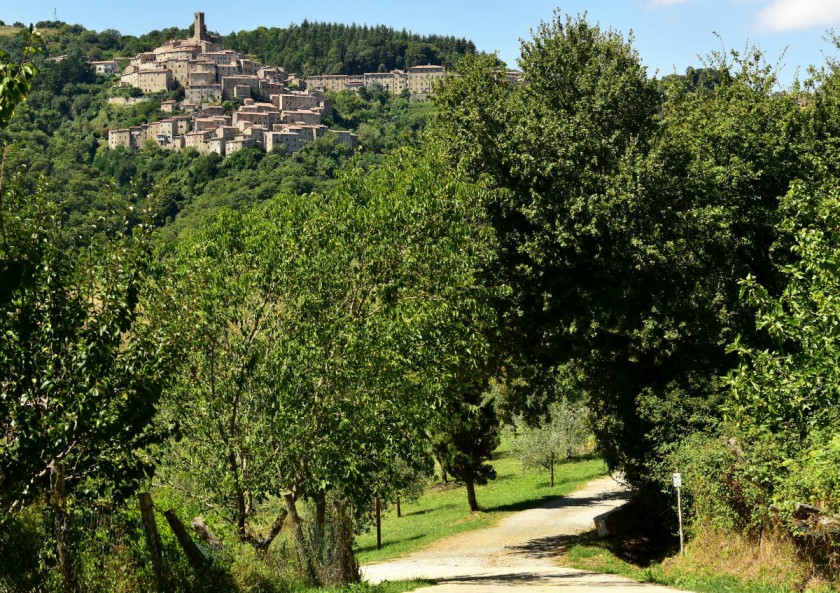 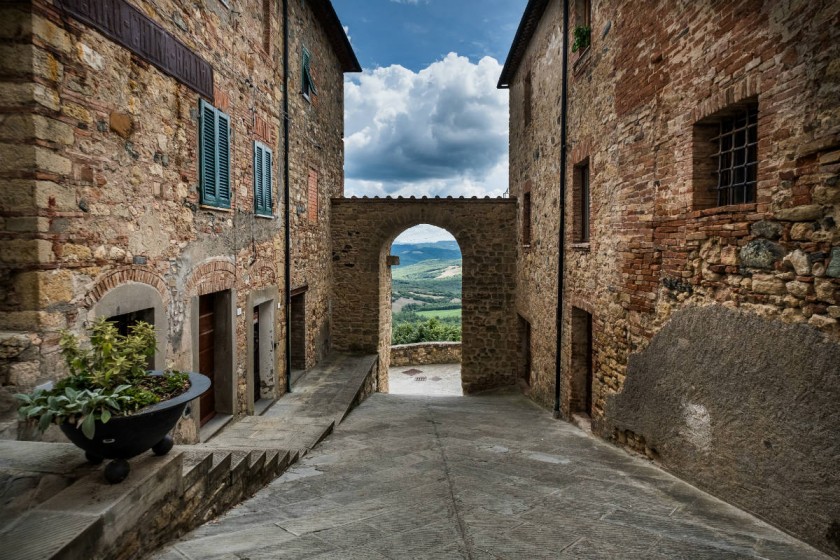 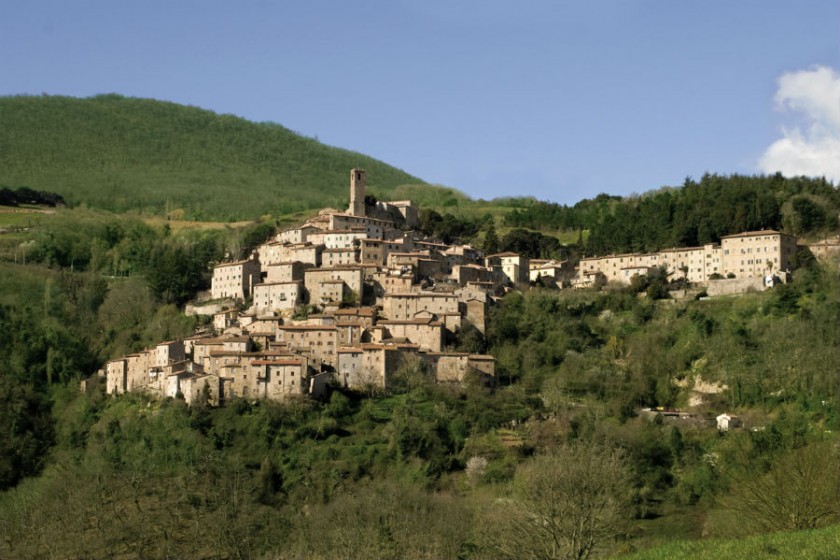 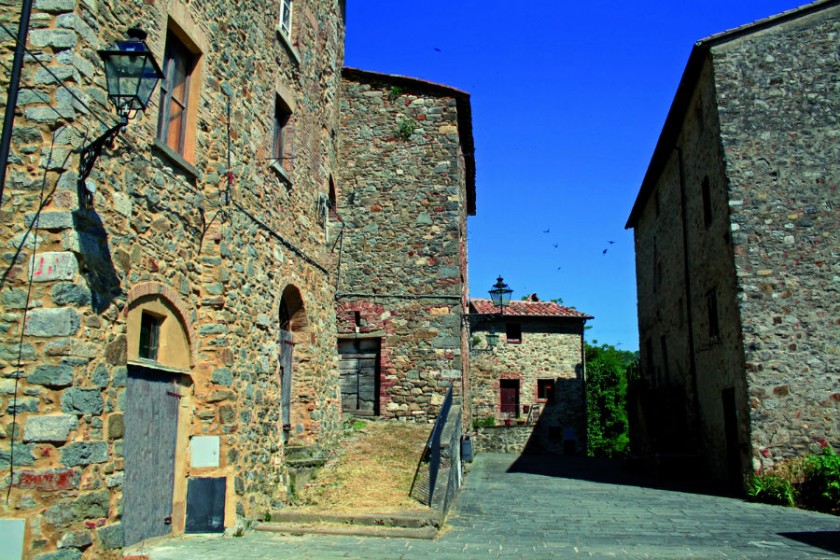 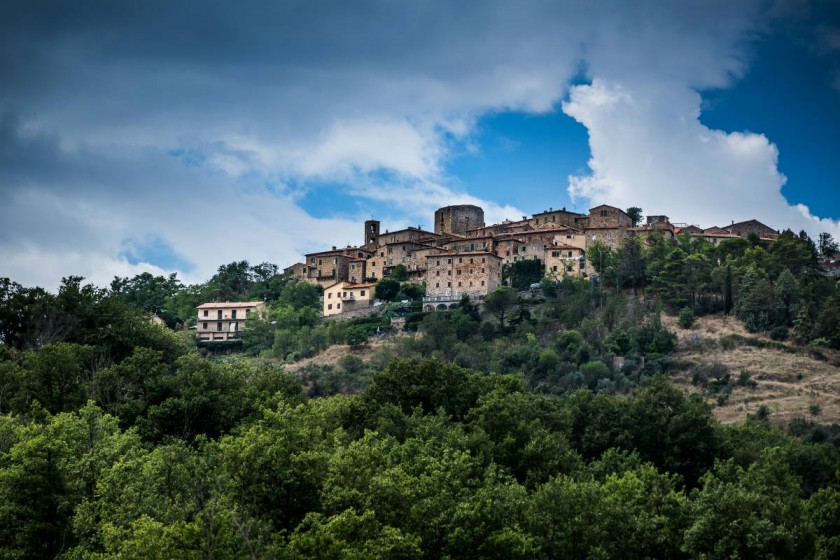 Castelnuovo Val di Cecina is a hilltop village, in the province of Pisa, whose characteristic is its cluster-like shape of grapes.
Of Etruscan origin, it gained importance in the Middle Ages when it became a fortified village of the Pisan Republic on the borders of that of Siena.

Castelnuovo Val di Cecina is characteristic for its architectural homogeneity, the narrow and winding streets paved with stone, the medieval gates, the views over the valley. The parish church preserves a beautiful crucifix from the early 14th century considered one of the finest examples of the Pisan sculptural school. The Oratory of San Rocco and the church of the village complete the itinerary of the holy places.
The communal territory has a varied morphology that ranges from the Apennine environment to the Mediterranean scrub and then hills again with vineyards and olive groves. From Castelnuovo there are naturalistic trails that reach places of historical interest such as the bridge over the Pavone stream, or panoramic views from which you can admire the Valle del Cornia and the Gulf of Piombino.

Nearby are archaeological sites of the Etruscan and Roman period. Near the fortified village of Montecastelli, the Buca delle Fate, an Etruscan hypogeum of the 6th century BC and the remains of the copper mines, which were inactive since 1941, are noted. After a long excavation campaign, the Bagnone spa area is once again visited, a Hellenistic complex of the 3rd century BC from which water springs are still present at temperatures between 40 and 70 degrees. In the medieval hamlet of Leccia, there is the chapel dedicated to Madonna del Latte, whose celebration is celebrated on June 14 invoking its protection from hail.

In a sunny and mild day, you walk along the narrow and winding streets paved in stone of the village from the characteristic shape of a pine cone, facing, time after time, one of its medieval doors. Stopping to take breath, gaze toward the valley, enjoying the landscape view thanks to some of its suggestive and sudden glimpses. It is already autumn, but the weather is still beautiful, ideal for an excursion around Castelnuovo, between the thick chestnut woods that cover the surrounding landscape, coloring it of yellow, red, brown. You walk up to the Pavone stream, with its two splendid Renaissance bridges. But equally enjoiable are the walks in the village, with their taste of Middle Ages. The parish church houses a crucifix of the beginning of the Fourteenth Century, precious work from the Pisana School of Sculpture. If you go up to the fraction called Sasso, where the valley of the river Cornia begins, it is possible to observe the natural phenomenas of the "putizze" (cold gas exhalations) and of the “fumaroles” (gaseous emissions accompanied by steam), expressions of the intense geothermal activities that characterizes for millennia the subsoil of these areas. You can conclude the walk in this locality admiring the remains of an ancient etrurian spa.

The Municipality is part of:
Paesi bandiera arancione

Via Moncini, 57, Massa Marittima (Grosseto)
17.35 Kilometers from Castelnuovo Val di Cecina
Etruscan Acropolis
The Etruscan acropolis tells the oldest story of Volterra and is part of the 'Enrico Fiumi' Archa...

Piazza Frà Domenico da Peccioli, 56037, Peccioli (Pisa)
40.75 Kilometers from Castelnuovo Val di Cecina
Diocesan Museum of Sacred Art
It contains works from the Cathedral of Volterra and other churches in the diocese, including pai...

Itinerary outside of Pisa: a weekend between Casale Marittimo and Castelnuovo Val di Cecina
Amongst the most beautiful Tuscan and Italian cities, Pisa has glimpses of rare beauty, so that, as you move away, you often want to turn around to look again to look up at the tall top of the leaning tower, dominating one of the most beautiful corners in the world for its architectural content. The extraordinary nature of Pisa and its territory has, not only priceless artistic treasures, a history that dates back to the times of the Mariti...
Continue
Unique Tuscan villages to Love - Download a free travel guide to the 51 certified Tuscan villages
It has recently been made available a free travel guide by Toscana Promozione Turistica, in Italian and English, about 51 Tuscan villages certified in the Borghi più Belli D'Italia, Paesi Bandiera Arancione, Mibact's Gioielli d'Italia and UNESCO World Heritage Sites. The volume, edited by Claudio Bacillieri, director in chief for Borghi Magazine, accompany th...
Continue