Share
Located in a particularly fascinating region of Valnerina, the village partly preserves the Romanesque religious and civil buildings of the early Middle Ages. The urban layout is characterized by flat ring roads and very steep radial ramps. The high tower that stands on the side of the village multiplies in the palombare towers, which constitute a peculiar element of the Valnerina landscape.

A look at Vallo di Nera 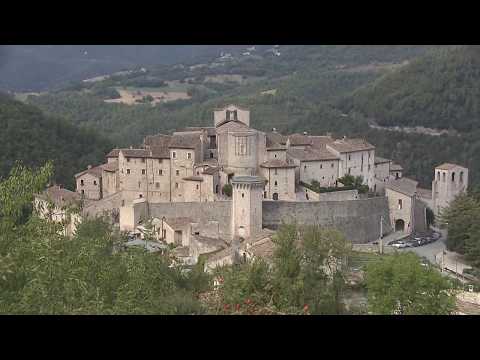 Archaeological evidence corroborates the thesis of the existence of remote settlements related to the indigenous peoples of this valley already in the VIII century B.C. In the period between the IV and the II century B.C. began the historical era of Valdinarco and subsequent Romanisation, witnessed by archaeological findings. Since 1177 Vallo di Nera became a feud of the Germanic duke of Spoleto Corrado of Hursligen and, in 1217, Jacopo Capocci formally granted to the inhabitants of Vallo di Nera possession of Colle di Flezano and the right of erigervi a castle in exchange for protection and defense on the part of Spoleto.

But Vallo di Nera, for its characteristic of important strategic point of control of the road, was fiercely contested between the status of the Church and Spoleto, in the XIII century, managed to conquer it. Nature and culture find an authentic symbiosis to Vallo di Nera, expressed in the ancient name of the place Castrum Vallis, where Vallum could be traced back both to the fortified place along the valley, as far as the longobardo Wald forest.

Thus still appears today Vallo di Nera a stone castle in the midst of the green woods which surround it. The urban plant placed on top of a hill is very compact and is characterized by roads to ring in the plane and by radial ramps very steep.
The high tower which stands on the side of the country it multiplies in palombare towers, which constitute a peculiar feature of the landscape of the Valnerina. These towers, originally built with functions of defense, have subsequently played an important role in the agricultural economy of the area, in so far as they allowed a vertical organization of functions: down the stable, above the dwelling, higher up the barns and, on top, La colombaia which provided fertiliser for the fields and meat for the inhabitants.

Outside the walls lies the village "I casali" softened from the workshops of the sixteenth-century along the roads which connected Vallo di Nera with the neighboring communes. The territory of high quality landscape and artistic comprises castles and villas of Meggiano, Piedipaterno, Geppa, paternal Monte Fiorello, Piedilacosta, La Pieve, Campore, Borbonea, Roccagelli.

Vallo di Nera is entirely surrounded by walls and towers and preserves intact its medieval urban structure, with narrow alleys surmounted by arcs. You recall the Franciscan church of Santa Maria, which contains frescoes (also in the sacristy) of the Giotto school including the famous "White Procession" painted by Cola di Pietro da Camerino in 1401, the parish church of San Giovanni Battista with frescoes by Jacopo Siculo and that of Santa Caterina annexd to the former convent of the Franciscan tertiary with remains of frescoes.

The pastors of Vallo di Nera are the ancient and famous, depositaries of the oral tradition of the Valnerina made of nursery rhymes, work songs, stories hyperbolic, that deserve to be heard by those who want to discover the secrets of the Valnerina. The House of Stories was born as a center of research and documentation with the purpose to make known this intangible heritage. Among the products of Vallo di Nera cheese deserves a special place. Every year takes place in June Fior di Cacio, gastronomic event where you can taste all the variety of cheeses of Vallo di Nera and of the Valnerina. Other delights of the area are: trout, truffles, honey and cold meats.

The Municipality is part of:
I Borghi più belli d'Italia
Città per la pace

Piazza Masolino, Panicale (Perugia)
69.44 Kilometers from Vallo di Nera
St. Lucy's Church
The Church of St Lucy in Montefalco is one of the most ancient of the village.

Via Roma, 11, Castiglione del Lago (Perugia)
78.23 Kilometers from Vallo di Nera
Paniﬁcio Pucci
The Pucci bakery confectionery has been offering for years its customers a rich production of swe...

Recipe: Umbrian cheese cake
Among the Umbrian tables, on Easter morning, there is a traditional cheese cake. A savory panettone which, depending on the area, may undergo variations while maintaining its constants: cheese, pecorino cheese, salt and pepper. As per tradition, this soft rustic is accompanied by the flavors of the capocollo, boiled eggs and wine and in ancient times it was customary to prepare it during Holy Week and then take it to church, to be blessed, on Easter day.Let's see how it is prepared.
Continue
800 years old: Happy birthay Vallo di Nera
A long parchment dated 23 September 1217 and signed by Jacopo by Messer Giovanni Capocci, Podestà di Spoleto, attests the birth of the castle of Vallo di Nera and the concession to the men of Vallo of the right to live on the hill of Flezano, formerly occupied by a fortress of the Duke Corrado d'Urslingen. So Vallo di Nera populated and  the ancient Castrum Valli, built in the heart of Valnerina. In a few days the ancient village will celebrate 800 years, and i...
Continue