Share
The ancient village of Orta San Giulio is located along the waters of Lake Orta: a strategic point and today one of the ideal stages from which to admire the small body of water. A few hundred meters from Piazza Motta, the heart of the village, right on the tip of the promontory, you can see the Island of San Giulio not far away. 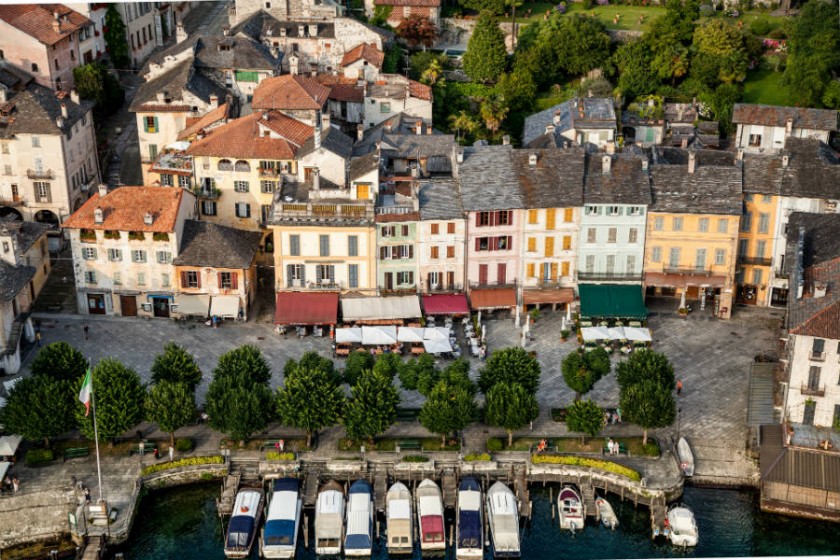 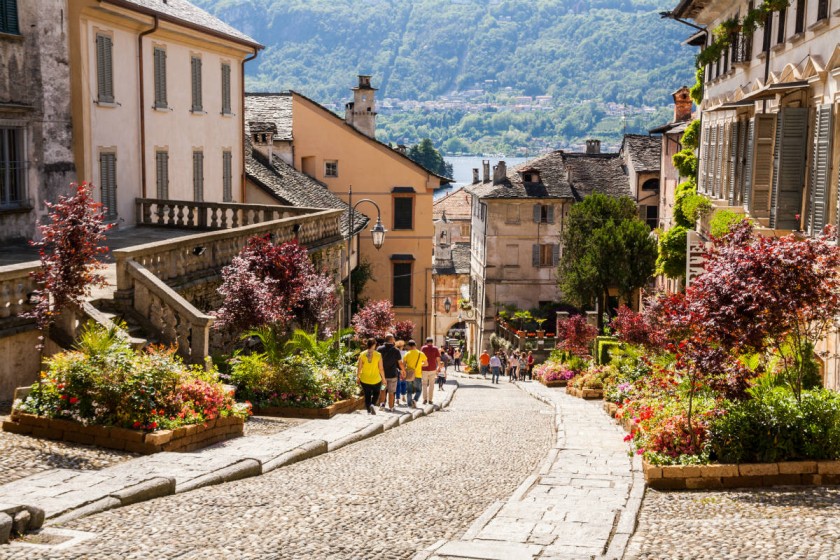 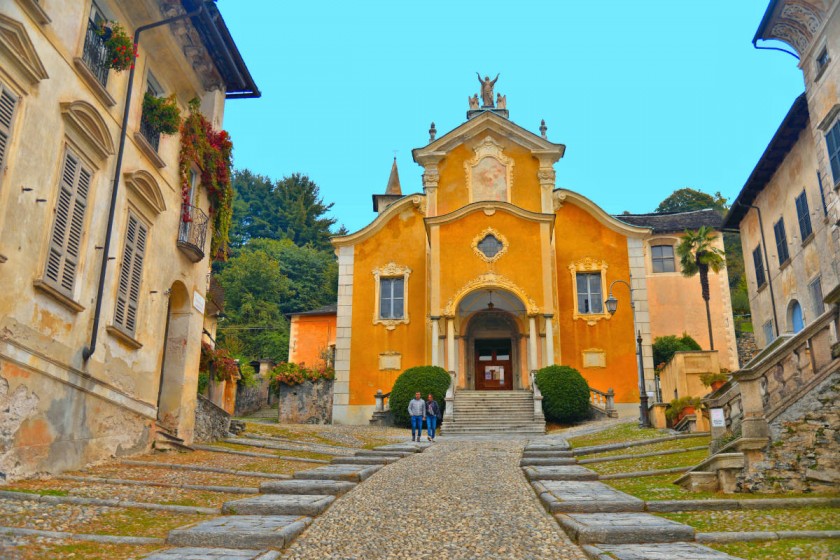 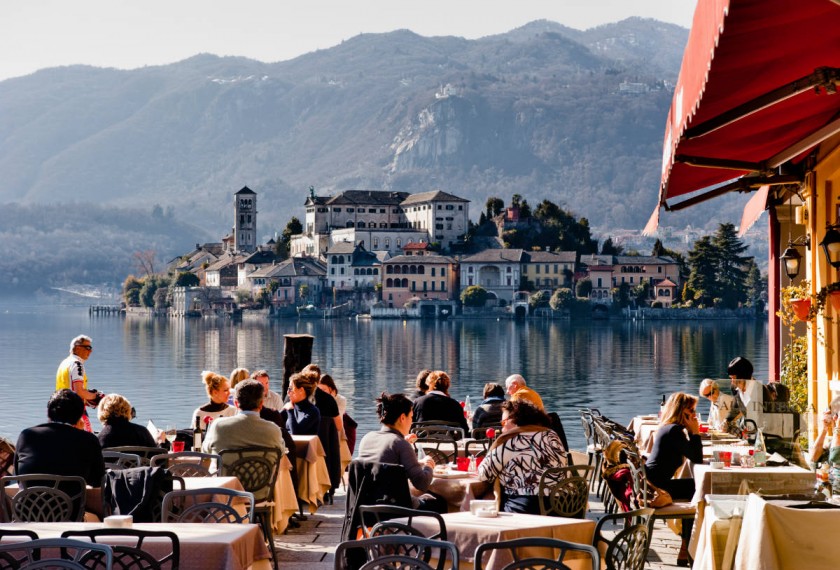 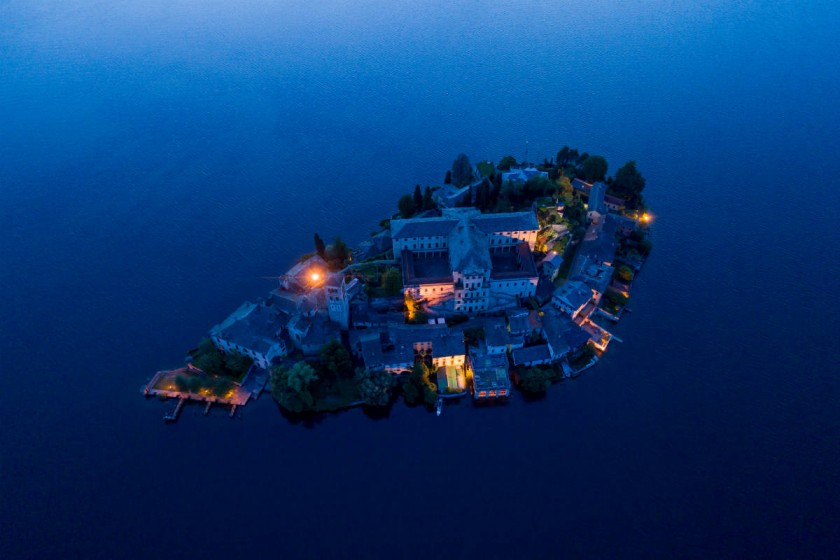 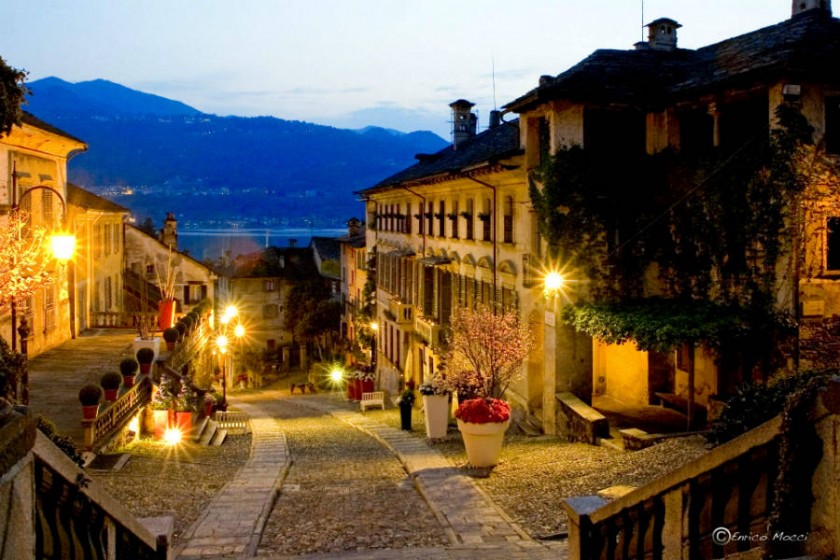 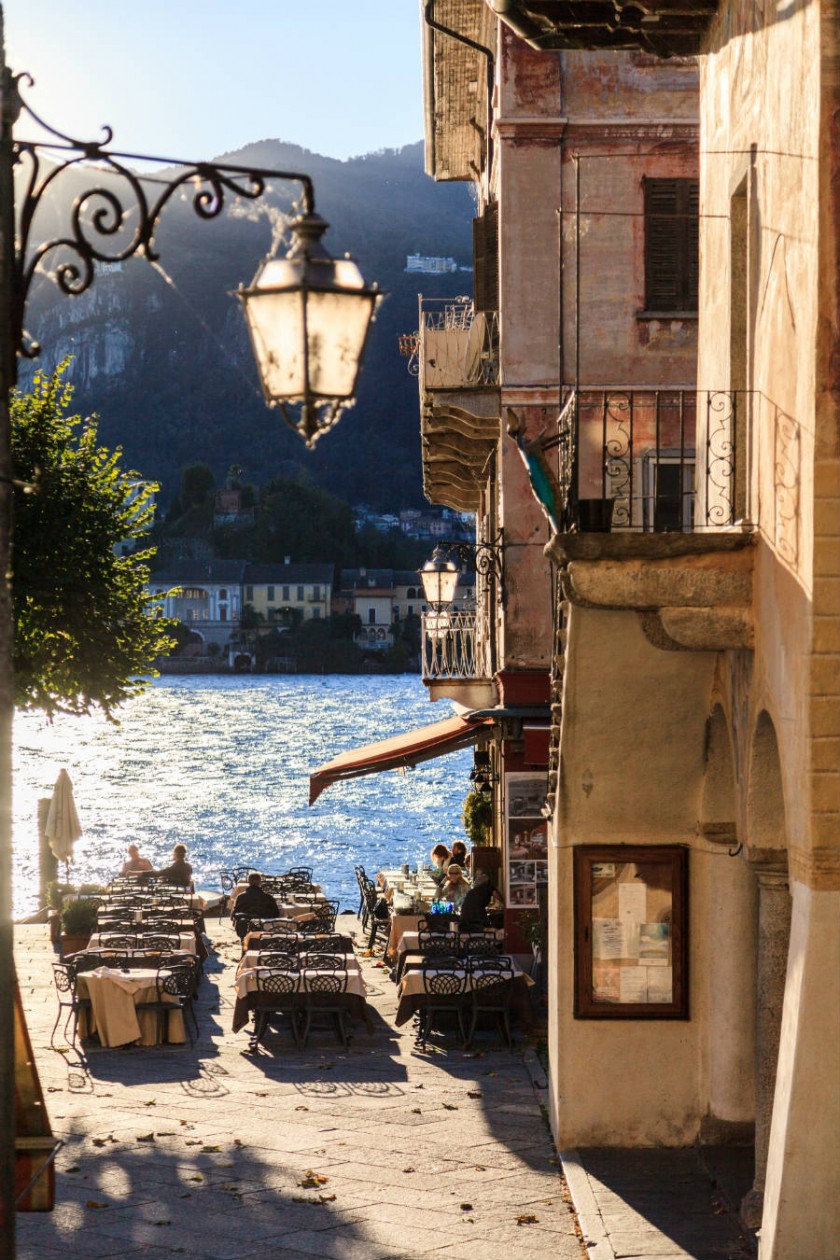 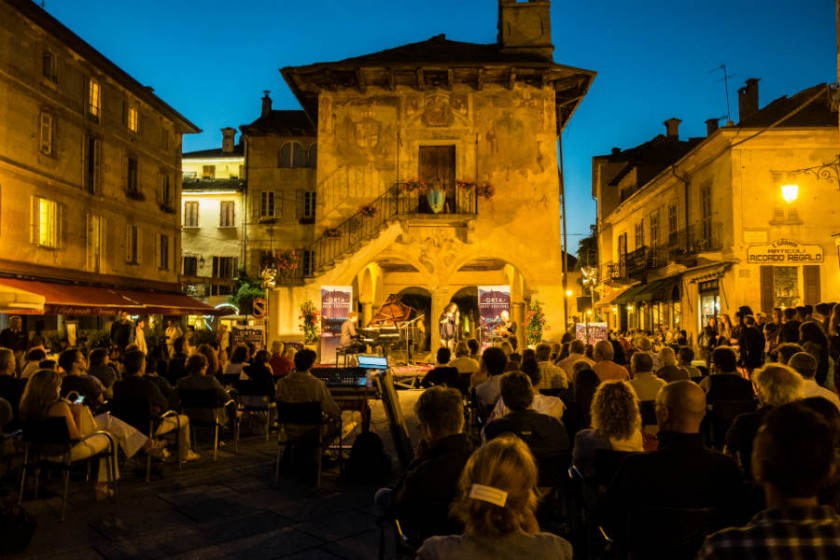 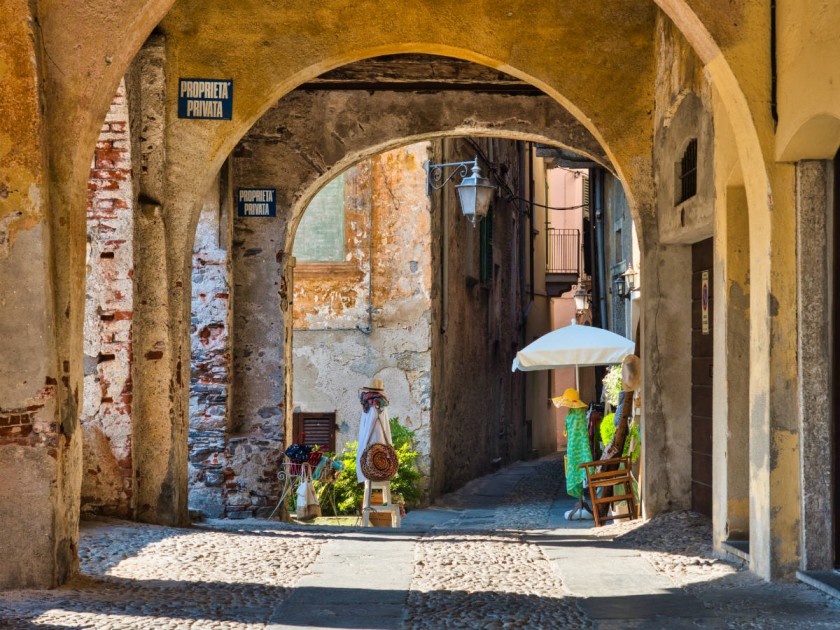 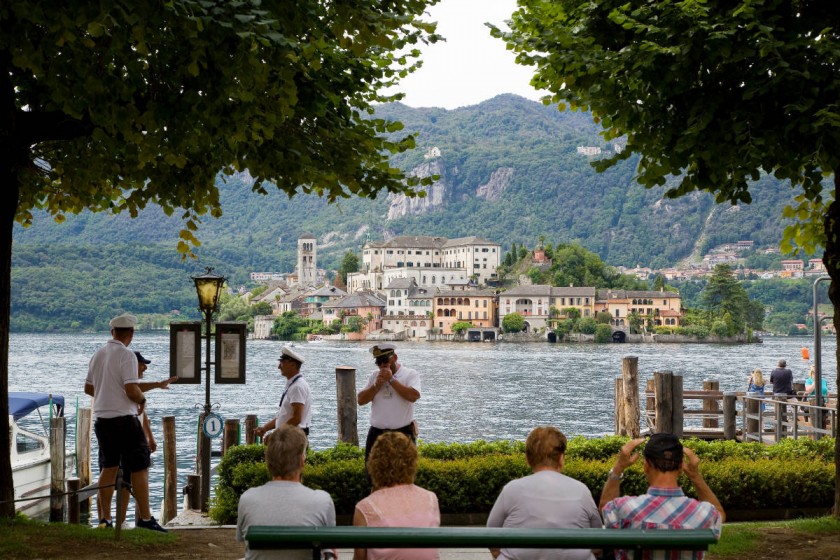 Orta San Giulio, Below: Chapel VII, with the Pope and the cardinals by Giovanni and Melchiorre D’Enrico (1634) 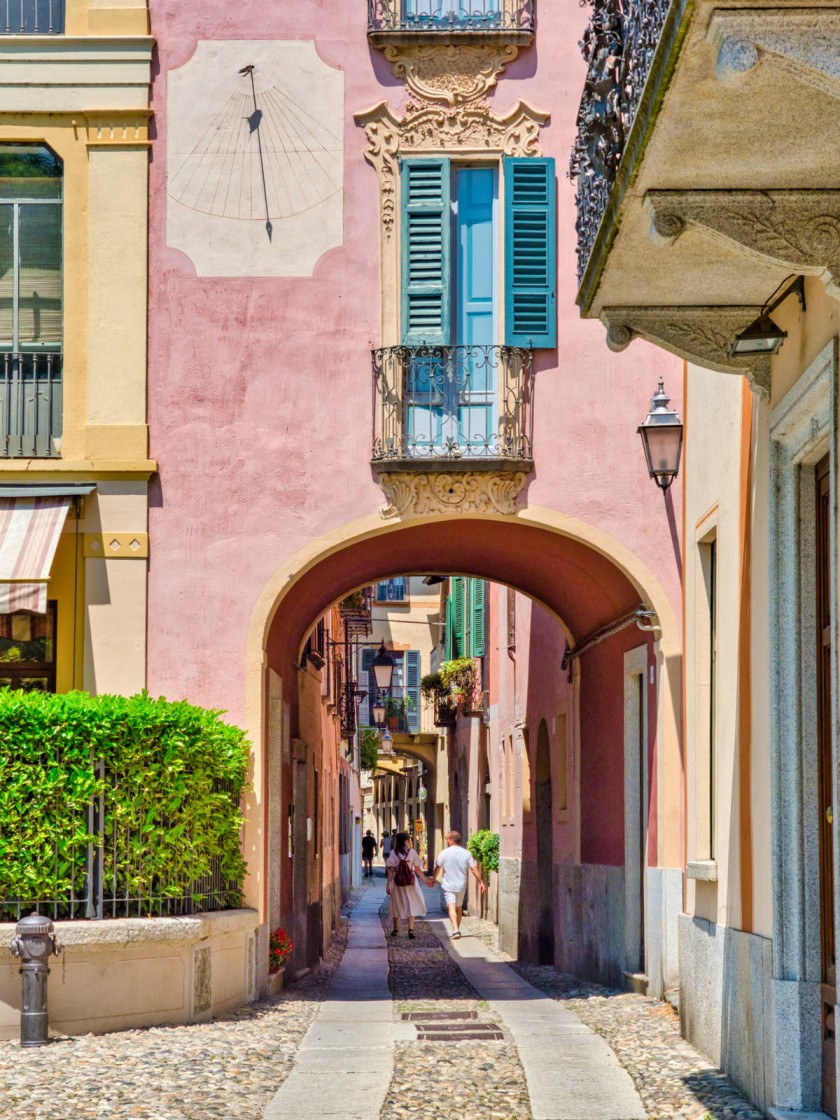 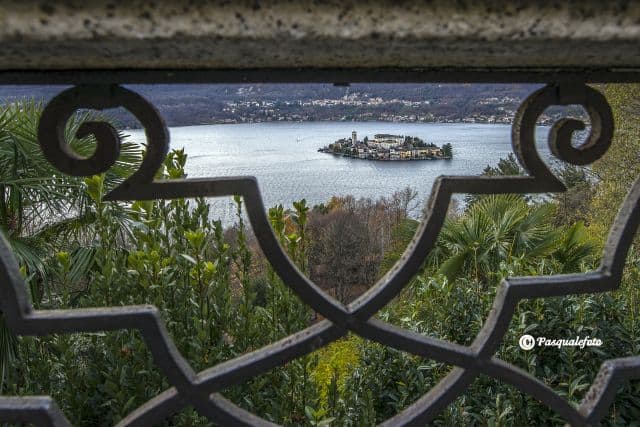 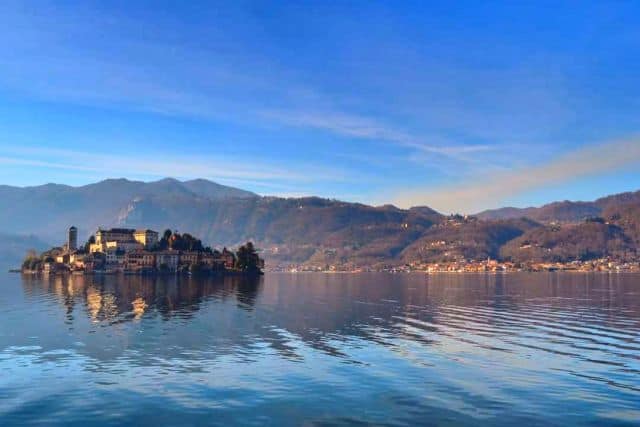 Located at the end of a hilly promontory which gently slopes towards the shores of the lake, the hamlet of Orta rises in front of the Isola San Giulio (patron saint of the village) and is located in the middle of the eastern shore of this small smooth lake, which is inherently a little jewel. The crest of the municipality bears the inscription Hortus conclusus (closed garden), from which the name Orta derives. This small miracle is completely pedestrian and retains the timeless charm of the medieval villages, characterized by picturesque alleys that run above and below the main street, parallel to the lake.

Under it many alleys descend to meet the shores of the lake, while others above it, go back steeply towards the Sacro Monte di Orta (UNESCO World Heritage), considered by Nietzsche "one of the most evocative places in the world".
At the center of the town you will find Piazza Motta, pulsating heart of the life of the village, from which the connections for the Island of San Giulio begin; it overlooks the Broletto or Palace of the Community (on the facade you can admire the city crest), in which in the Middle Ages the power was exercised. In front of the Broletto begins an uphill road called 'Motta' from which you reach the parish church of Santa Maria Assunta (1485). On the road there are some historical buildings, including Palazzo Gemelli and Palazzo De Penotti Fortis. On the opposite side of Piazza Motta instead, the visitor will be enraptured by a marvelous area which opens out onto the lake. There is a small jetty and shortly after (about 400 meters from the shore), that little jewel that is the island of San Giulio will open out in front of your eyes. The small island seems to float on the water edge and is dominated by the building of the former seminary that today hosts the Mater Ecclesiae Monastery of Benedictine nuns. On the island there is also the Basilica of San Giulio, the most important church in Romanic style of the area. Lastly, the village of Orta comprises numerous districts, as for example the Moccarolo, that follows the banks of the lake towards the south, and definitely deserves a walk in it. In this handful of alleys you will follow the ancient houses of the fishermen and craftsmen and villas with gardens overlooking the lake. One of these is Villa Motta. Built in the second half of the nineteenth century, in addition to housing a wonderful garden that gives its incomparable views over the lake and the Island of San Giulio, competes with Sacro Monte for the title of more evocative panoramic point of the whole village.

the Municipality is part of:
I Borghi più belli d’Italia
Paesi Bandiera Arancione

Holy Mount of Orta
Is the same Salome to recall the incident: "Together we did stage ... in Orta ... where the nearb...
Via al Sacro Monte, Orta San Giulio
The Basilica of San Giulio
According to the legend, around 390 the holy reached the island sailing on its skirt and liberate...
Isola di San Giulio, Orta San Giulio
Palazzo Penotti Ubertini
The structure of particular artistic charm, regularly hosts exhibitions and cultural events. The ...
Via Caire Albertoletti, 31, Orta San Giulio
Vintage Toy and Doll Museum
The vintage doll museum of Angera, in sixteen rooms of the Rocca Borromea, exhibits especially vi...

Via Rocca Castello, Angera (Varese)
12.29 Kilometers from Orta San Giulio
Sanctuary of Our Lady of the Shore
On the lakefront of Angera, to close the Piazza Garibaldi in front of the Austrian port, stands t...

28838, Stresa (Verbano-Cusio-Ossola)
14.13 Kilometers from Orta San Giulio
Isola Madre
Isola Madre is the largest of the Borromean islands and is located halfway between Baveno and Pal...

28838, Stresa (Verbano-Cusio-Ossola)
15.89 Kilometers from Orta San Giulio
Baptistery of St John the Baptist
The Collegiate Church of Santo Stefano in the hamlet of Lenno is one of the cultural and artistic...

Via Gippini, 11, Orta San Giulio
Hotel Baiardo
In Romagnano Sesia, Hotel Baiardo is an excellent location for a relaxing stay

Via Novara, 337, Romagnano Sesia (Novara)
20.13 Kilometers from Orta San Giulio
= distances as the crow flies
Management Body of the Protected Areas of Valle Sesia
The Authority is entrusted with the management of two regional parks: the Natural Park of Alta Va...

Corso Roma, 35, Varallo (Vercelli)
12.46 Kilometers from Orta San Giulio
Management Body of the Protected Areas of Ticino and Lake Maggiore
Headquartered in Cameri, it now manages over 20 protected areas in the northeastern quadrant of P...

Our news about Orta San Giulio

Villages of Piedmont, authentic harmony
There is a world of widespread beauty in Piedmont, of stories to be told, of scents and flavours to be experienced: 14 small towns included among the Most Beautiful Villages in Italy, 34 awarded the Orange Flag as a mark of tourist-environmental quality, 5 marked with the Green Ear for sustainable rural development. And throughout the region there are more than a thousand municipalities with less than five thousand inhabitants, custodians of a...
Continue
5 romantic villages for emotions between poetry, dream and reality
Not just Halloween, trick or treat. Our Peninsula is dotted with romantic hamlets in which drunkenness rhymes with tenderness: to spend a day, a weekend or a long bridge in evocative atmospheres. 1. Monte Isola (Lombardy) Lake Iseo: refined, intimate and "vintage", with its pastel colored villas overlooking the water and, around, a crown of parish churches and monasteries. With a primadonna, Monte Isola, which stands out in the m...
Continue
Orta San Giulio: between the mortadella of Orta and the views on San Giulio
A splendid village in Lake Orta territory, among the extraordinary views on the lake, gastronomic workshops and restaurants that offer the delicious local cured meat with polenta or panissa. In this corner of Northern Piedmont, where the waters of Lake Orta weave between the Novara mountains framed by wooded heights and a handful of suggestive villages, there is a particular cold cut among the protagonists of the assorted local gastronomy. A unique and delicious salami, which comes from the beautifu...
Continue
The island of silence and the legend of the dragon of Lake Orta
In ancient times, the island of San Giulio, the only one in the Orta lake and overlooking the village of Orta San Giulio, was little more than a rock inhabited by snakes and a dragon that was living on cattle and sometimes human lives. Today the island is called the Island of Silence not only for the limited number of inhabitants, largely nuns, but also for the curious walk of "silence and meditation". The Island of Silence is definitely a place full of peace and magic enc...
Continue
Today we celebrate World Water Day
Today, March 22, we celebrate World Water Day, established in 1993 by the General Assembly of the United Nations. This year the theme is Water for all - Leaving no one behind ("Water for all, let's not leave anyone behind"), which is inspired by the sixth of the 17 goals for the sustainable development of the 2030 Agenda, or "to guarantee everyone the availability and sustainable management of water and sanitation by 2030». «Water is a precious commodity and it...
Continue