Share
The gateway to the historic region of Lunigiana, dominating the entire village is the beautiful Malaspina Castle, one of the most beautiful and best preserved fortresses in the area. Thickly crossed by paths suitable for trekking and mountain biking, it is a pleasure to discover the luxuriant nature of the mountains that surround the village. 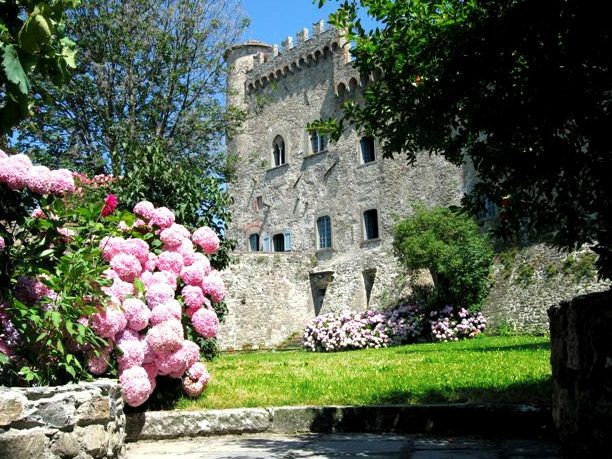 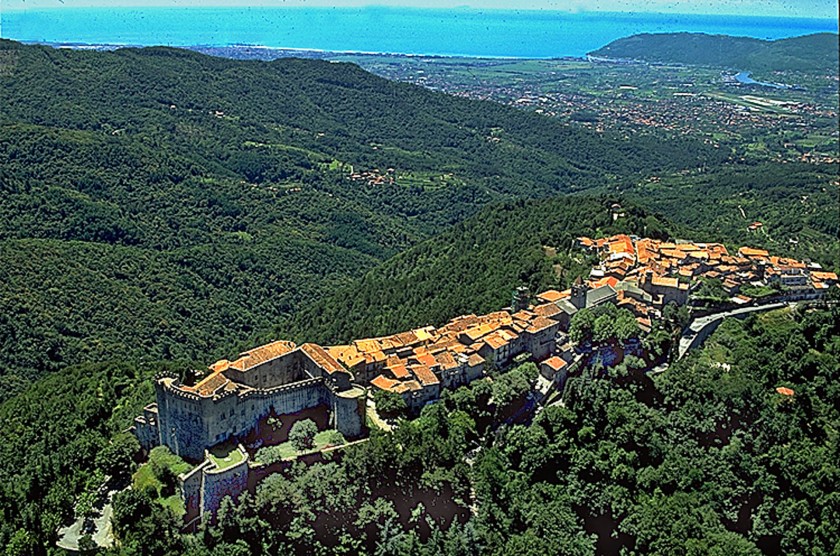 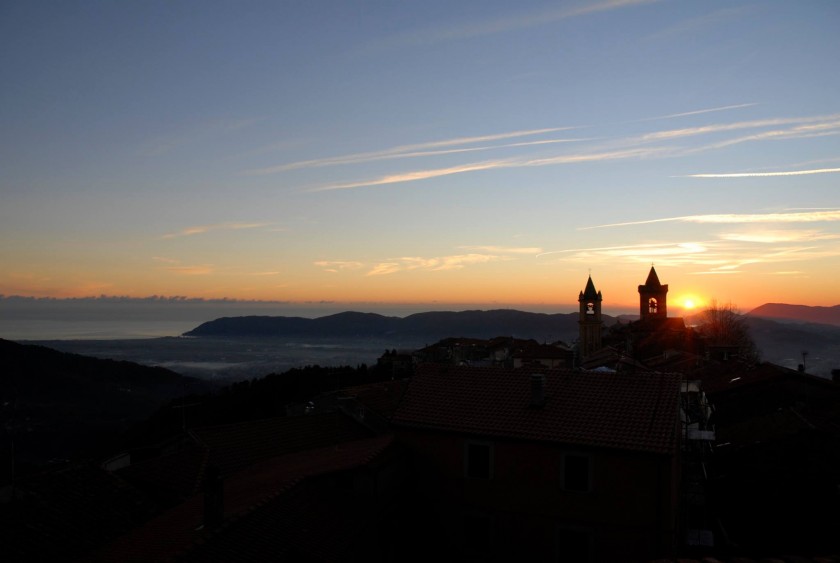 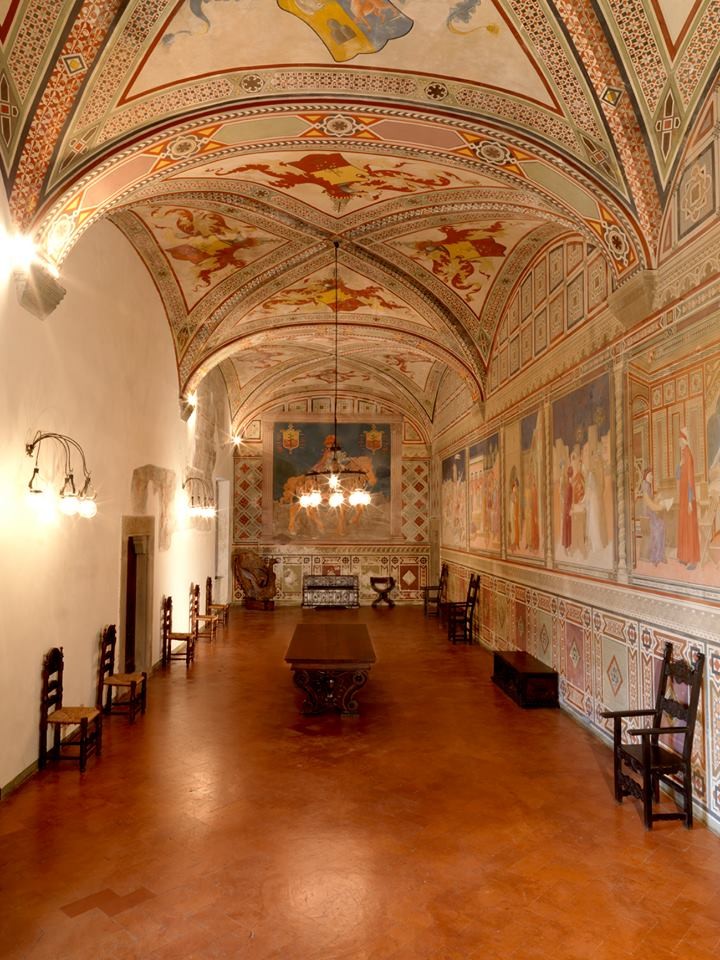 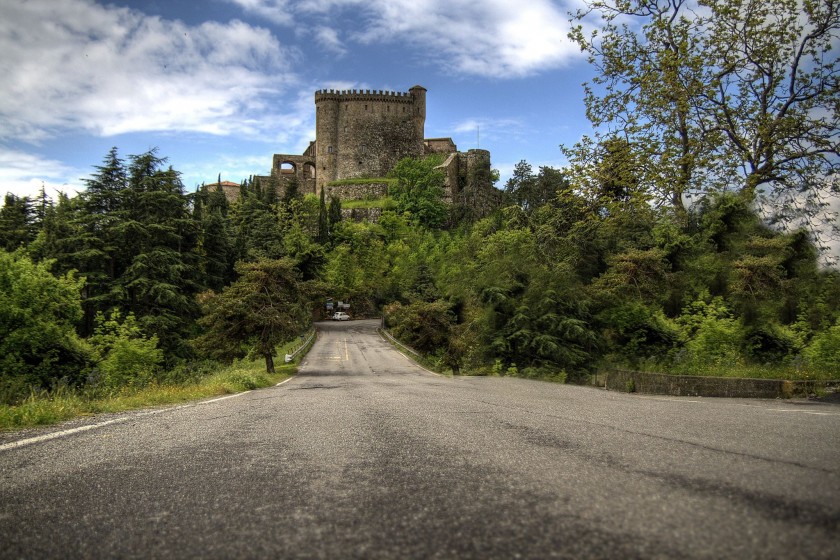 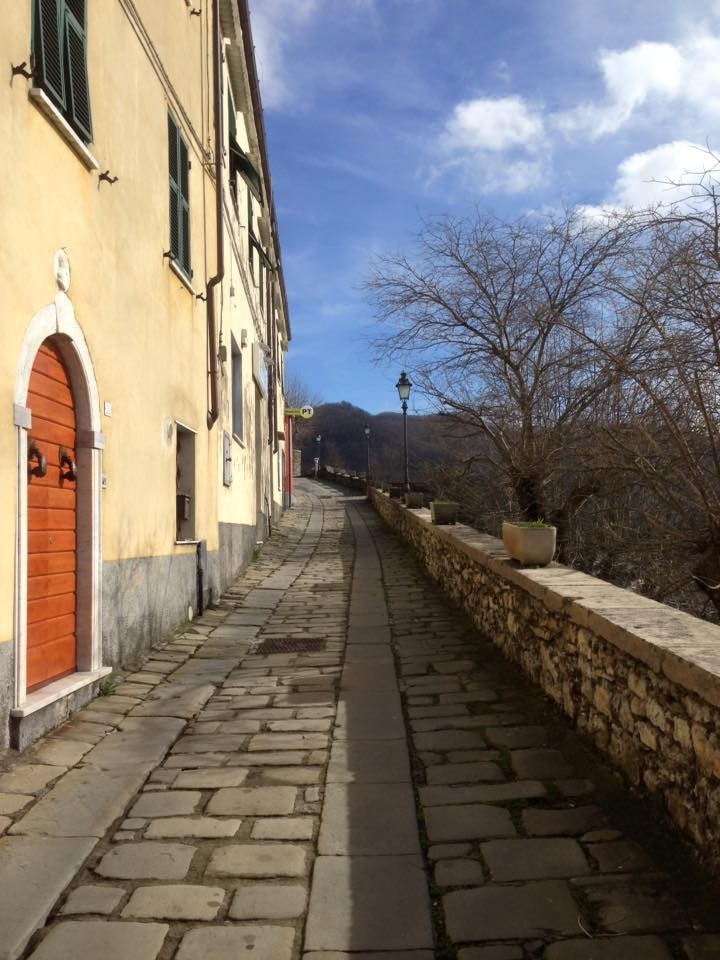 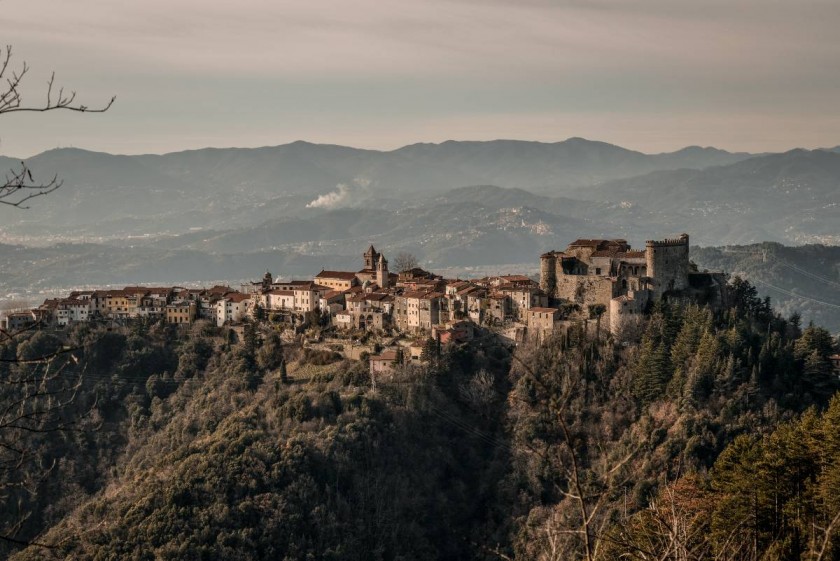 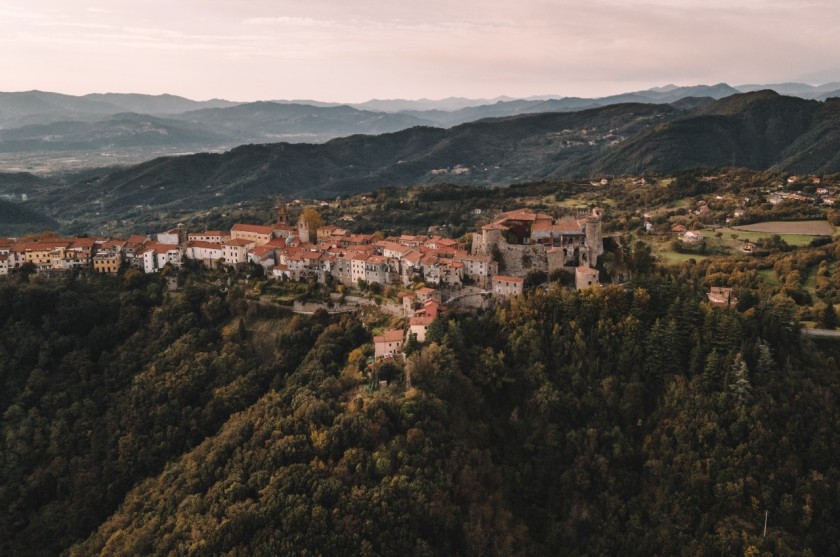 Fosdinovo is an ancient village located in the historic region of Lunigiana, in Tuscany.
Inhabited since prehistoric times, Fosdinovo was the capital of an independent marquisate governed by the most important branch of the Malaspina dello Spino Fiorito family, whose marquises were imperial vicars in Italy.
In ancient times the town was the protagonist of the clashes between the Malaspina and the bishops of Luni, but from 1340, Spinetta Malaspina became the sole owner of the feud, beginning an era of relative splendor and tranquility until 1800.
The undisputed symbol of the village is the Malaspina Castle, located at the top of the mountain and the inhabited area, establishing itself as one of the most beautiful and best preserved Lunigiana fortresses.

Going to discover the village it is possible to see: the Parish Church of San Remigio, originally wanted by the bishops of Luni; the Oratory of the Compagnia dei Bianchi, whose white marble facade dates back to the second half of the 1600s.

Fosdinovo is located in an area marked by the battles of the Second World War and terrible massacres of civilians.
These events are remembered in the Audiovisual Museum of the Resistance, with an exhibition that focuses on "memory", consisting of documents such as interviews, archive images and recordings, presented through multimedia supports that establish an interactive relationship with the visitor.

Locally they produce an excellent white wine, Vermentino fosdinovese or the Colli di Luni Bianco DOC and the Vino Bianco IGT Toscana. Among the red wines, instead, you can find the Sangiovese, Malvasia Nera, Ciliegiolo, Cannaiolo, Colli di Luni Ross DOC, Vino Rosso IGT Toscana and the "Merla" (a biotype of Cannaiolo with a small dose of Colorino).

Among the typical dishes of the fosdinovese tradition we recall the Testarolo (fosdinovese variant), the castagnaccio and the pattone. The testaroli ("testaròi" in fosdinovese dialect) made in Fosdinovo differ from the lunigianesi ones for smaller size, different preparation and because they are not cut, seasoned and served in a dish, but they are filled with olive oil, pesto, grated pecorino cheese, mushroom sauce, salami, stracchino cheese or other things (also sweet food like hazelnut spread), rolled up and eaten like a sandwich. There is a feast dedicated to the testarolo on the fourth weekend of July in Fosdinovo. The castagnacci, instead ("castignà" in fosdinovese dialect), are one of the many typically fosdinovesi dishes where they use chestnut flour, scented with rosemary or blended with pine nuts and orange peel. You can try them for example at the Chestnut Festival that is held on the third Sunday of October. Finally, the pattone are dishes prepared with chestnut flour and water, cooked on chestnut leaves and served rolled up with ricotta cheese and/or hazelnut spread.

Fosdinovo, the only hamlet certified by the province of Massa Carrara, from the Middle Ages to the XVIII century was the small capital of an independent marquisate reigned by the noble family Malaspina that settled here at the beginning of 1300. All of this to say that here, as everywhere else in Lunigiana, you can breathe history, as the high walkway between the Ghibelline battlements of the castle allows you to enjoy this great location on the Val di Magra, where the village rises. Residence and political centre of the family, the Castle of Malaspina is the symbol and main attraction of Fosdinovo. The historical commemoration that takes place in July is not a usual reenactment of the Middle Ages, but a way to feel the stone's breathing, which lasts from seven hundred years, and actually more because the Malaspina restored and enlarged a castle which was already a couple of centuries old. In one of its rooms Dante Alighieri seemed to have found hospitality. Coming in places like this is a need. It is the desire to escape from the short time of appointments, of immediate deadlines, of the daily news, and enter into a long time, linked to the memory of those who lived here, in these houses, under these beams, between these walls. Here he is, Galeotto Malaspina, the lord of Fosdinovo: in his sepulchral monument of 1367, in the parish church dedicated to Saint Remigius, a French saint whose cult spread in Italy through the Via Francigena. Here is the building in which there was the old Mint. And there, the Malaspina Theatre with its inlaid wood boxes on which the dust of time lays down.

Villa Malaspina of Caniparola
the Villa Malaspina of Caniparola is located at the foot of the hills of the village of Fosdinovo...
Viale Malaspina, 32, località Caniparola, Fosdinovo
Malaspina Castle
The Malaspina Castle is the biggest and best preserved castle of the Lunigiana, in Tuscany.
Piazza Sauxillanges, Fosdinovo
Audiovisual Museum of the Resistance
The Audiovisual Museum of the Resistance is located in the village of Fosdinovo, in Tuscany.
Via delle Prate, 12, Fosdinovo
Sotto-Ria
A gallery about 70 metres long, 2.20 metres wide, paved with geometric patterns and sandstone peb...

Via Varignano Vecchio, 55, Portovenere (La Spezia)
16.29 Kilometers from Fosdinovo
Doria Castle
The Doria Castle of Porto Venere in Liguria is one of the most majestic military architectures of...

Sentiero 1, Portovenere (La Spezia)
17.53 Kilometers from Fosdinovo
Byron's Cave
The Byron's Cave is located near the rocks under St, Peter's Church, in the village of Porto Vene...

Via dei Mulini, 1, Portovenere (La Spezia)
17.59 Kilometers from Fosdinovo
St. Peter's Church
the St. Peter's Church is located in the village of Porto Venere, overlooking the gulf of the poe...

Fosdinovo is present in issue 4 of our digital magazine e-borghi travel.
Read it now!

Travelling with Dante: the most fascinating villages in the life and work of the Supreme Poet
The Supreme Poet influenced Italian culture, creating a common language and drawing inspiration from his wanderings around Italy to build a collective memory in his most famous work, the Divine Comedy. Let's discover below which villages are linked to Dante's personal or artistic life. Brisighella and Certaldo: life and works of Dante in two splendid villages We begin our journey in the footsteps of Dante's travels among the most beautiful vi...
Continue
The other Tuscany: travelling around the hinterland villages and the islands
If Florence, Pisa, the “Chiantishire” as well as the villages like Volterra and San Giminiano are famous all over the world, Tuscany is actually an endless chest of historical, architectural and natural treasures that can astonish even the ones who think they know this region pretty well thanks to many precious details that are like precious jewels that deserve to be slowly discovered in a well-being mood. But your experience there...
Continue
Pesto
DISH ALSO FOR VEGETERIAN The Testaroli alla Lunigiana is a typical and simple dish of the tradition of Lunigiana and Pontremoli’s area that was already popular in ancient Rome. The Testaroli are a sort of a bread wrap cooked in “testi”, cast-iron or terracotta containers (nowadays you can also cook them in a pan) from which the dish is named after; then they are cut into little squares and once they are boiled and cooled down...
Continue
5 villages with ghosts and witches for Halloween
Five villages to be discovered during Halloween, atmospheres full of charm and mystery, spirits that linger in castles and witches who wink from the darkness: 1. Triora (Imperia) It is par excellence "
Continue
The ghost of the marquis Carlo Francesco Agostino of Fosdinovo
The Malaspina Castle of Fosdinovo is a fortress dating back to the mid-twelfth century which, with its architectural features and the stories related to this building, it dominates the territory of Lunigiana with a unique charm. From its strategic position in the north of Tuscany, between the Apuan Alps and the Tyrrhenian coast (Lerici, Cinque Terre, Versilia), you can admire a panorama that extends from the Apuan Alps to the Plain of the River Magra to the sea. On clearer days you can...
Continue
Unique Tuscan villages to Love - Download a free travel guide to the 51 certified Tuscan villages
It has recently been made available a free travel guide by Toscana Promozione Turistica, in Italian and English, about 51 Tuscan villages certified in the Borghi più Belli D'Italia, Paesi Bandiera Arancione, Mibact's Gioielli d'Italia and UNESCO World Heritage Sites. The volume, edited by Claudio Bacillieri, director in chief for Borghi Magazine, accompany th...
Continue