Share
The hamlet of Grazie is located in the territory of the municipality of Curtatone about 7 km from the city center of Mantua. The village is characterized by a deep, consolidated, suggestive intertwining of various components. A well-preserved historical core, which has coexisted for centuries in profound symbiosis with the surrounding environment.

Lotus flowers in the river Mincio

A look at Grazie 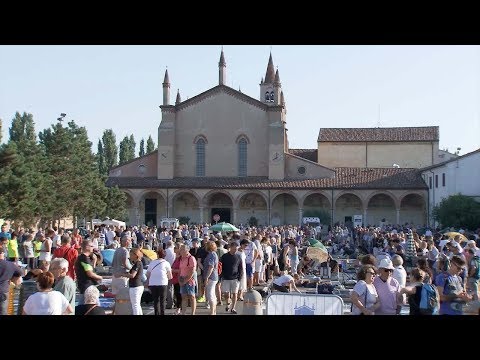 The hamlet of Grazie, between the end of the Eighteenth Century and the early years of the Nineteenth Century, employs nearly two hundred people, grouped into 43 families that live in a score of houses. The pole of attraction housing is without doubt the Sanctuary, whose origins date back to 1200, around which piazzale arise the dwellings, many of which are shops and especially inns and taverns, owned by the Marquis Capilupi or of the Franciscan Fathers of the sanctuary or family Siliprandi. Between the shops, numerous butchers, and not by chance, in the beginning of the nineteenth century opens the seat of the Foro Boario, i.e. the locus of bargaining of cattle and other animals.

The economic activities live thanks to the heritage of the ancient Fair, instituted in 1425 by Gianfrancesco Gonzaga who ratified the use established to open commercial activities in order to meet the needs of the many pilgrims visiting the Sanctuary built at the behest of Francesco Gonzaga in 1399.

The village is characterized by a profound interweaving, consolidated, suggestive of various components. A historical nucleus well preserved, which has lived together for centuries in profound harmony with the surrounding environment. The most ancient part of the town consists of buildings in array present in Via Madonna of snow, in whom they recognize the original cell that gave rise, in time, to the various typologies building codes. In the small cottages (modest in size and with a maximum height of two floors except some three storey) present on the right side of the square you can find the typological changes which occurred in the course of the years and the fact that all dwellings have been formed with the closure of the porticoes facing the square. For architectural features worthy of note, a distinction is made between two buildings: one on the right side of the square and the other prospettante via Francesca at the corner of Via San Pio X (Palazzo Sarto).

The ancient village of Grazie is finally embraced by the river Mincio, which precisely in that position form a huge loop that directs it toward Mantua and constitutes, in the form of moist area, one of the natural places of major interest both nationally and internationally. The Mincio Valleys are in fact a natural complex of enormous importance from the point of view of the environment, of great originality and a certain rarity for the complex of characteristics that enclose. This is one of the largest and most important wetlands in northern Italy, where the waters remain at narrow depth for a period of time sufficiently long to allow the formation of sediment, the growth of many communities vegetal hygrophilous, as well as the presence of numerous animal populations associated with them. The valleys are visitable through navigation services associated with guided visits.

Sanctuary of the Beata Vergine delle Grazie
Sanctuary of Beata Vergine delle Grazie is located near Curtatone, in Lombardy.
Piazzale Santuario, 5, Grazie
Museum of Madonnari
The Museum of Madonnari is located at Grazie di Curtatone in Lombardy.
Piazzale Santuario angolo Madonna della Neve, 29, Grazie
Visconti bridge
The Visconti bridge of Borghetto sul Mincio in Lombardy is a bridge-dam built in the XIV century.

Via dell'Assunta, 5 - 46018, Sabbioneta (Mantova)
23.72 Kilometers from Grazie
Ducal Palace
the Ducal Palace, or Grand Palace, is a historical building of Sabbioneta, Lombardia

Via Galleria, 5 - 46018, Sabbioneta (Mantova)
23.87 Kilometers from Grazie
Polirone's Monastery and Civic Museum
The Monastery of Polirone is located in San Benedetto Po, in Lombardy.

Via Teatro, 46018, Sabbioneta (Mantova)
23.80 Kilometers from Grazie
The Church of San Nicola di Bari
Located inside the fortified village of Castellaro Lagusello, the parish church dedicated to San ...

Maison Resola
In the heart of Borghetto – one of the most beautiful bourgs of Italy – on the banks of the river...

Via Vespasiano Gonzaga 14, Sabbioneta (Mantova)
23.82 Kilometers from Grazie
Osteria La Dispensa
All the delicacies of the Mantuan cooking are served using only natural and seasonal products.

Via Galleria 3, Sabbioneta (Mantova)
23.85 Kilometers from Grazie
VAUDEVILLE CAFÉ - ENOTECA - OSTERIA
Café in the city center in front of the Teatro Olimpico.

Via Vespasiano Gonzaga 14, Sabbioneta (Mantova)
23.81 Kilometers from Grazie
Trattoria La Colomba
Small family-run tavern where you can enjoy the typical dishes of the Mantuan tradition as the bi...

Via Castello 15, Monzambano (Mantova)
5130.06 Kilometers from Grazie
Osteria La Dispensa
All the delicacies of the Mantuan cooking are served using only natural and seasonal products.

Grazie is present in issue 3 of our digital magazine e-borghi travel.
Read it now!

The Mincio Park: a river runs through it