Share
All the charm and beauty of Puglia concentrated in a single, small Salento village. In Presicce you can admire the mosaic of churches and stately buildings that embellish the historic center, the olive trees that frame the village with their twisted shapes, the dry stone walls that tell long stories and the wonderful Renaissance farms that alternate with the eighteenth-century houses. 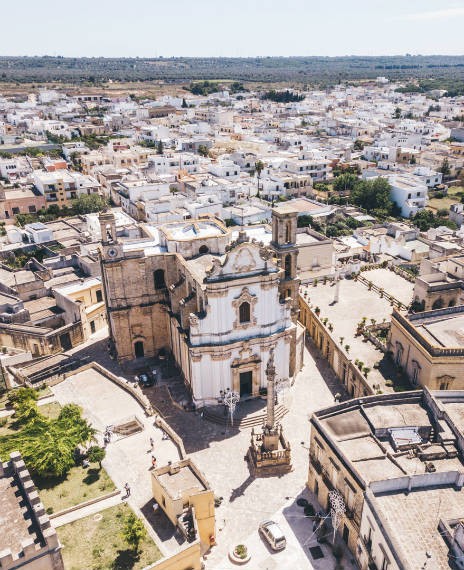 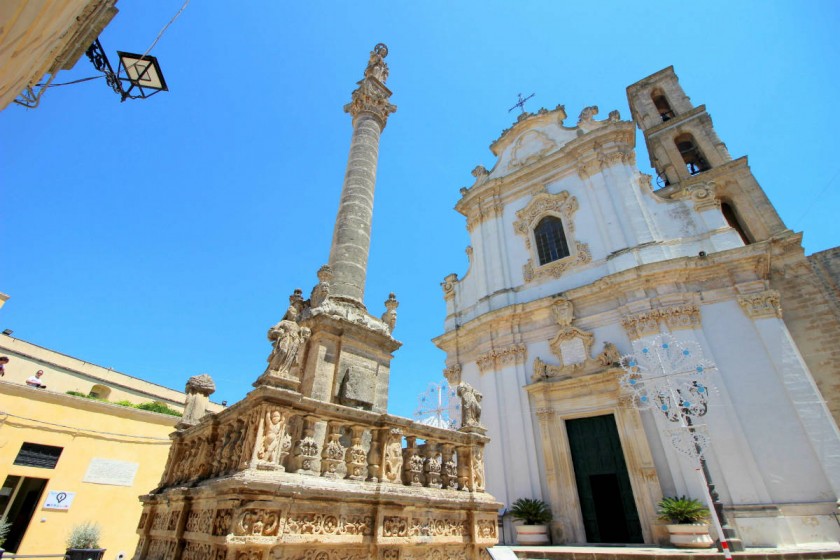 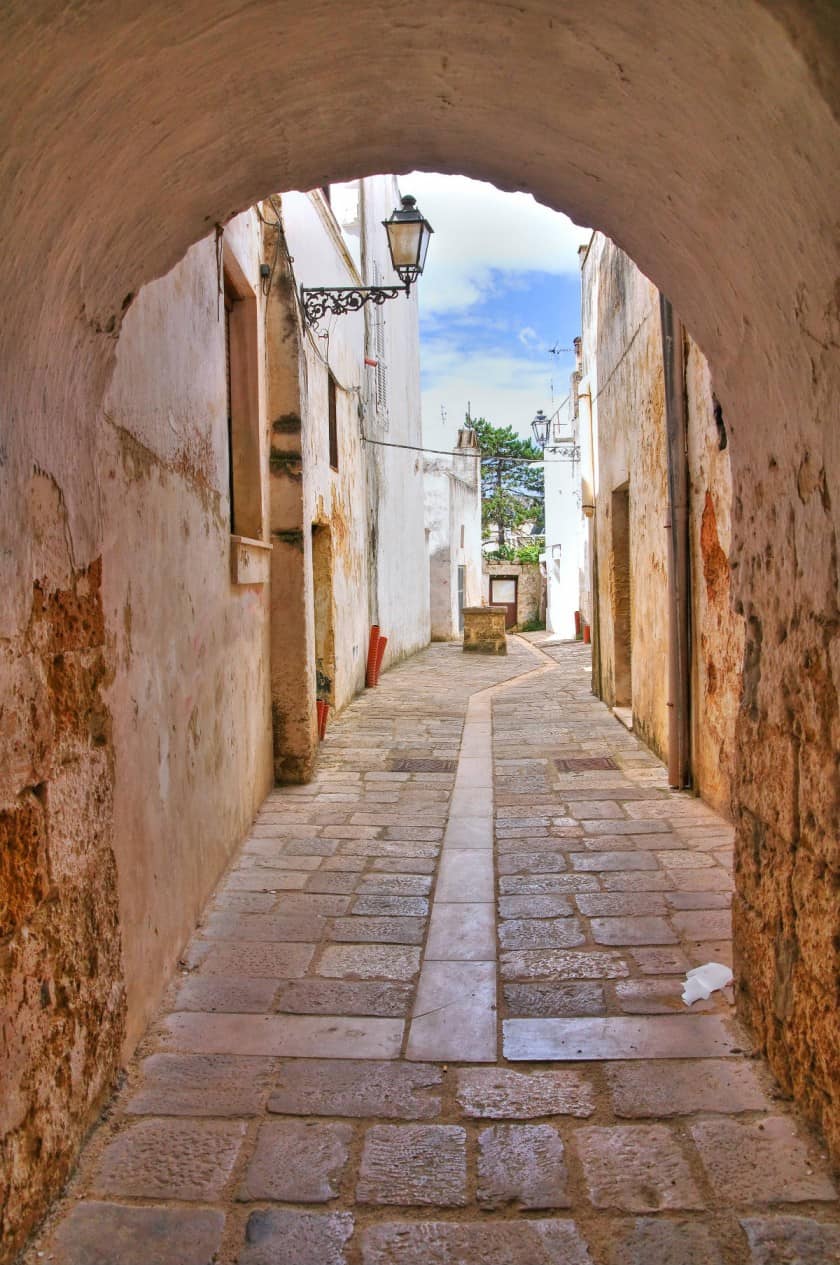 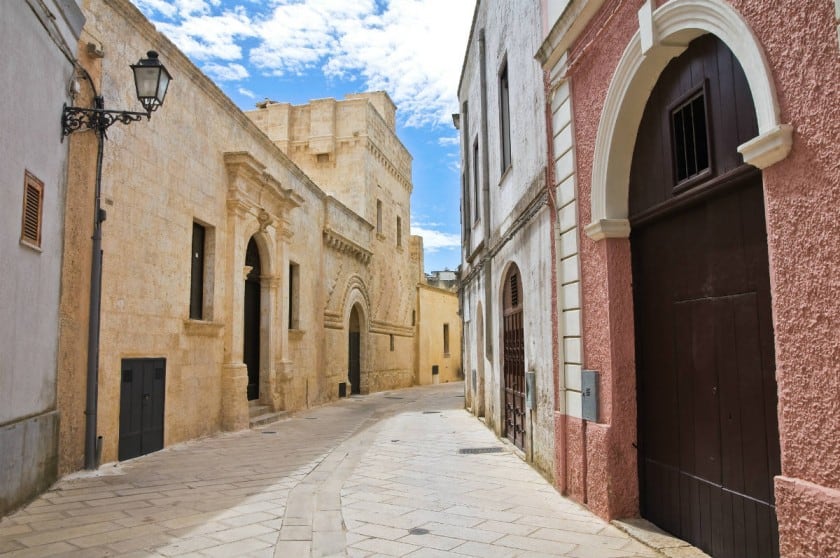 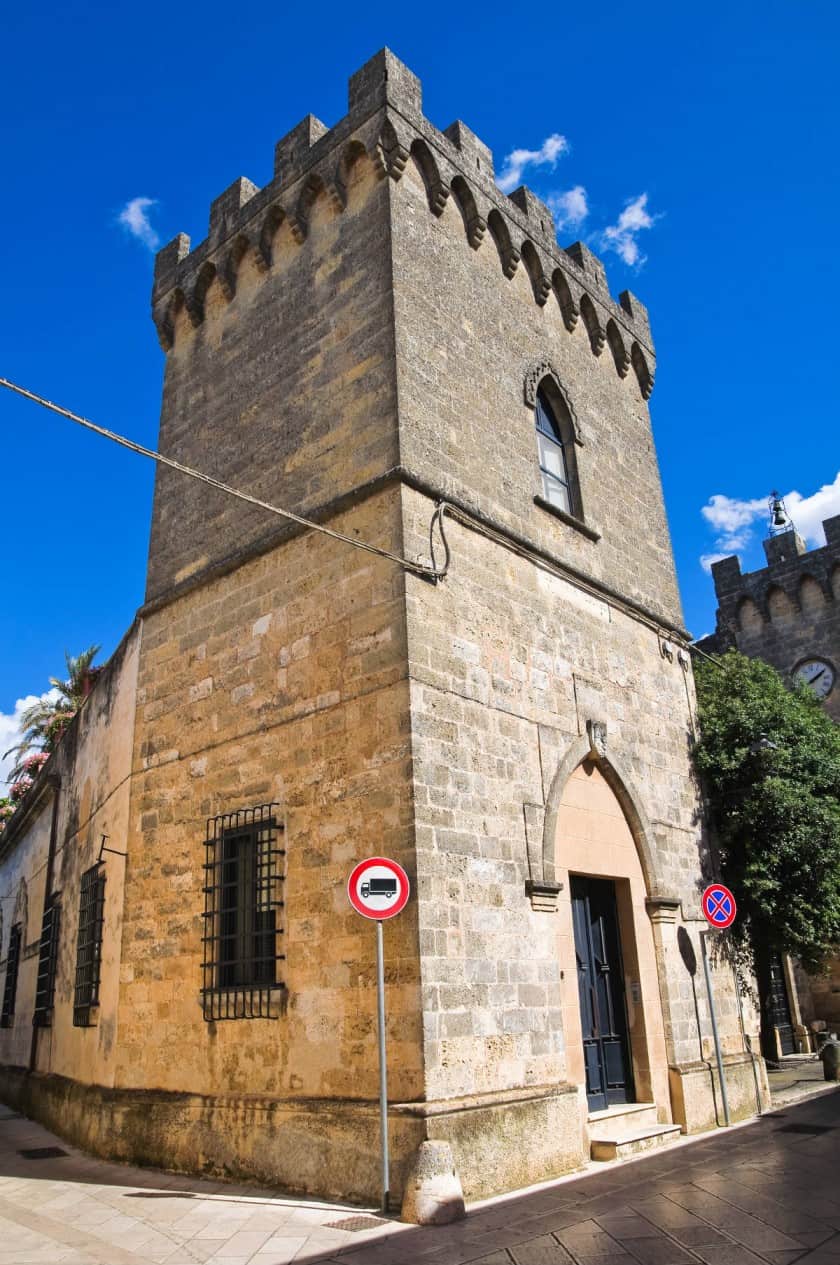 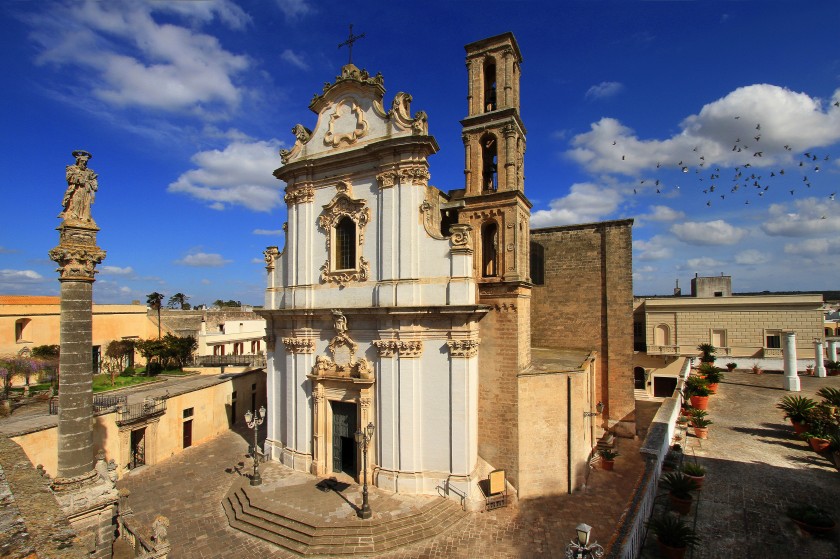 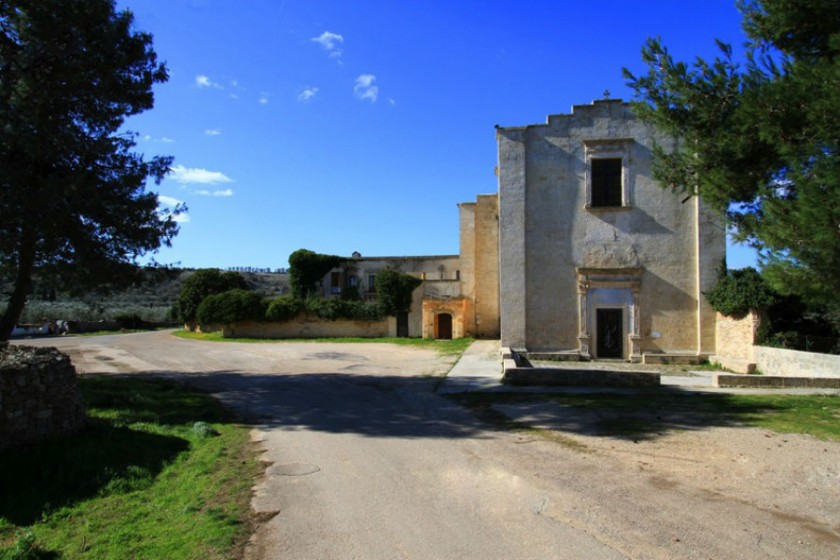 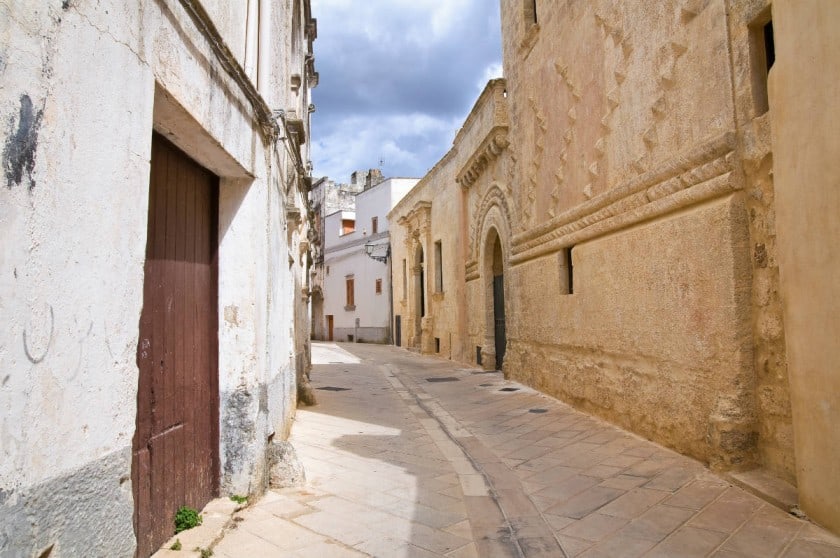 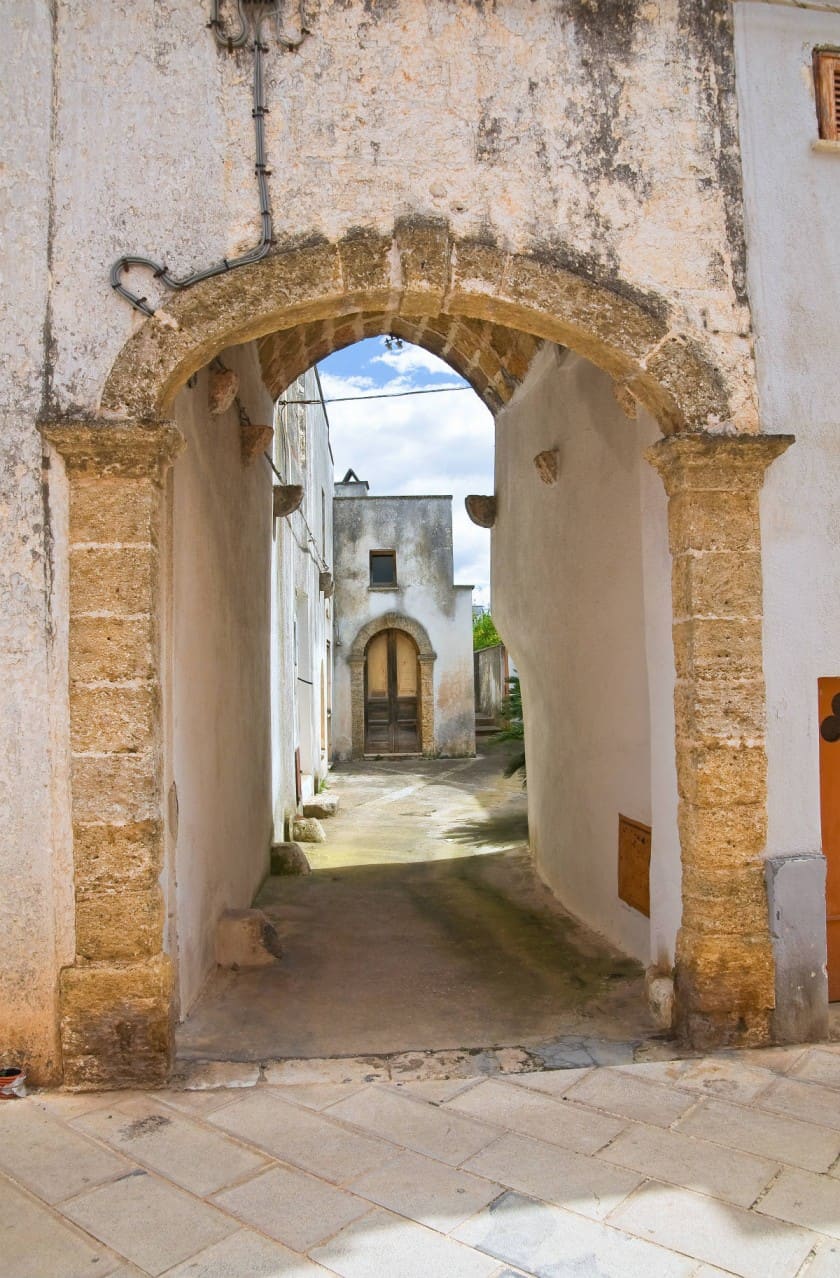 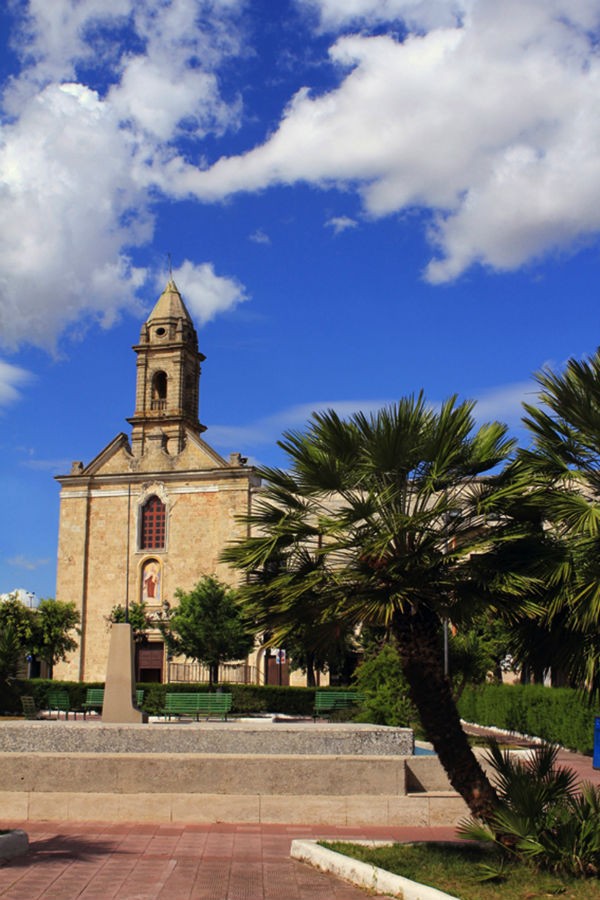 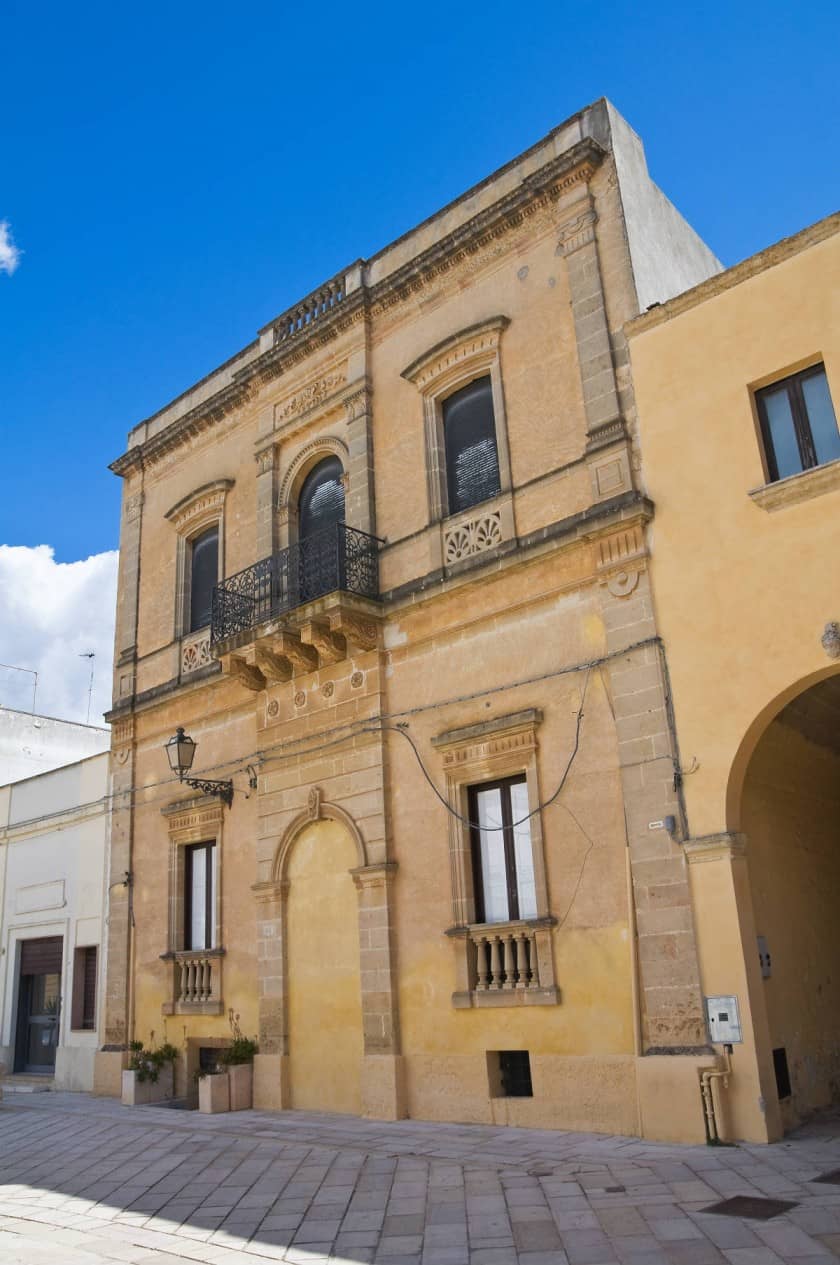 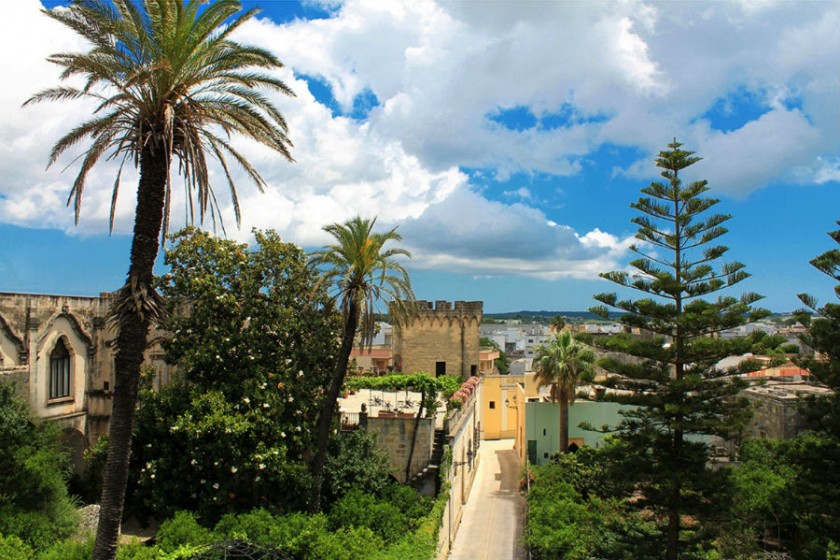 the village in Presicce, situated in the lower Salento near Capo di Leuca, is known as the city of hypogea, for the presence of numerous underground mills. The inhabited center, located in a valley which is particularly rich in water, is dominated from the Conservatory of Pozzomauro, a hill organised in terraces and dry-stone walls along the slopes and covered with Mediterranean maquis, expanses of olive groves, pine trees and shrub species of thorny oaks.

The story of the origins of Presicce is not well delineated. Probably it was the great presence of aquifers superficial to attract the first settlements, which seem to date back around the VII century. The coat of arms in Presicce, a deer drinking from a source, seems to reproduce this abundance of water in the territory presiccese. The foundation of the real and proper village has been the work of the inhabitants of Pozzomauro a settlement located on a hill to the south-west of the current inhabited center. Of this settlement are still visible the ruins of an ancient tower used as a defense from the invasions of the Saracens, a basilian crypt dug in the rock and a church from a very basic style. In 1481 the Saracens invaded Pozzomauro destroying it. Even the origins of the name of the country appear to be linked with this settlement, it is believed that Presicce derives from the Latin word 'praesidium' as to indicate a military garrison. In 1088 Presicce becomes part of the Principality of Taranto, from here you know that the feud passed between the hands of several noble families including Securo, i De Specola, the Gonzaga, Brayda and principles Bartilotti. In 1714 the feud was elevated to the principality of Monaco and the entrusted subsequently to de Liguoro'.

A history of blood is linked to the origins of the term "Mascarani", nickname of the inhabitants of Presicce. A time in the principality from the seventeenth century was in force of the law of the ius primae noctis, i.e. an alleged right of the feudatory, never documented, to pass with the novellas brides the wedding night until one night, during the carnival of the year 1655 according to legend (in reality the episode took place in November during the feast of the patron saint, Saint Andrew the Apostle), the prince is encountered by a window of the ancient castle to greet the festive citizens, when between the crowd appeared a masked man that fired a shot, killing the prince. Precisely from this episode comes the nickname of the inhabitants in Presicce, Mascarani. Following the event criminal perpetrated by an inhabitant of the place, the de' Liguoro bought the Principality preparing an agricultural reform with the redistribution of land in emphyteusis to farmers and installing a series of crushers, suitable for the production of olive oil exported in Naples and in Spain.

The numerous courtyard houses present in the ancient village of the inhabited area in Presicce date back to the Sixteenth Century. Are the humble dwellings, composed mainly of a single compartment (maximum two) and the cellar, grouped around a space discovered, the court. In this space, where took place the main domestic activities, is always present the well and the stack, a washroom in stone used to wash clothes.

The warm climate and fertile soil have allowed the presiccesi to develop the agricultural sector, intensifying particularly the production of wine and especially of olive oil, the main economic source of the country in times gone by. Around the XI-XIII century spread the use of digging crushers ipogei at Grotta, said trappeti. Their presence suggests that Presicci had a booming economy and allows to reconstruct the stages of its development: the first were built on the slopes of the greenhouse in Pozzomauro; later, after drainage of the swamp "Arnea", activities began to move downstream. Most trappeti focuses along the road that connected the first two urban nuclei from which winds the entire country. In the past, in piazza Villani, were present auctioneers who stared at the price on the market. Between traders there was the Venetian Pietro David, known for its commercial relations throughout the world. The typology of trappeti Presicce is simple: are dug into the tufa rock, the floor is in beaten earth, there were presses "alla genovese" or mills "French". The modest size of the environments, unsuitable to contain new crushers and presses, not allowed to make changes in technology. Toward the end of the XIX century the trappeti were abandoned, some processed in landfills or cellars and others, located in the countryside, in folds or stables. Starting from the nineties, subsequent interventions for the reclamation and restructuring have allowed for the recovery of these environments as a tourist destination.

Ducal Palace
the Palazzo Ducale of Presicce, in Puglia, collects testimonies of over a thousand years of histo...
Piazza del Popolo, Presicce
Mother Church
The Mother Church of Specchia dates back to 1605 and has a Baroque architecture.

Via Umberto I, 25, Specchia (Lecce)
5.44 Kilometers from Presicce
Risolo Castle
Risolo Castle is a sixteenth century building located in the historical center of Specchia.

Via Umberto I, 3, Specchia (Lecce)
5.50 Kilometers from Presicce
Black Franciscans' Convent
The Church of the Black Franciscans of Specchia and the adjoining Convent have a certain date, th...

Via Approdo di Enea, Porto Badisco, Otranto (Lecce)
27.61 Kilometers from Presicce
Calvary
an apse of a hypothetical church where the nave is the road, side walls are the scenes road and t...

SP358, Tricase (Lecce)
12.57 Kilometers from Presicce
Gallone Palace
The Palace of Gallone Princes is the most sumptuous cultural monument of the village of Tricase, ...

Via Punta, Otranto (Lecce)
33.55 Kilometers from Presicce
Black Franciscans' Convent
The Church of the Black Franciscans of Specchia and the adjoining Convent have a certain date, th...

Via Giuseppe Garibaldi, 27, Specchia (Lecce)
5.60 Kilometers from Presicce
= distances as the crow flies

Find where to sleep in Presicce

Strada Provinciale per Miggiano, km 1, n. 53, Specchia (Lecce)
6.29 Kilometers from Presicce
Masseria Uccio
Entirely made with stones and tuffs of the place is a testimony of the ancient peasant civilizati...

Via Madonna del Passo 68, 73028 , Otranto (Lecce)
33.28 Kilometers from Presicce
Masseria Uccio
Entirely made with stones and tuffs of the place is a testimony of the ancient peasant civilizati...

S.P. 277, Via Giurdignano, Otranto (Lecce)
31.05 Kilometers from Presicce
B&B Centro Storico
The Bed & Breakfast Centro Storico rises in the heart of Otranto, on the ground floor of the anci...

Villa La Tonnara in Porto Cesareo, Salento and villages for connoisseurs
Specchia, Presicce, Seclì. A set of axes of villages that the Salento shows off on its carpet of seductions. Atmospheres suspended in time, with the harmony of the architectures, the slow rhythms, the art choreographies framed by the succession of olive trees with silver foliage while on the coast the beaches are facing crystal waves. And to enjoy the best of Salento, you need to know how to choose the right place to stay. Vil...
Continue
Recipe: Potato pitta
A typical dish of Salento cuisine suitable for a dinner or an appetizer, to be enjoyed both hot and cold. The pizzaiola potato pitta consists of a kind of rustic two-layer focaccia baked in the oven based on potatoes, cheese, breadcrumbs and eggs and with a filling of fried onion, tomato sauce, black olives and capers.Let's see how to prepare it. Ingredients 1 kg of yellow-fleshed potatoes1 large egg200 gr of grated pecorino / parmiggianoo...
Continue
Recipe: Pasticciotto Leccese
The Pasticciotto Leccese has a long history behind it. Born as a simple makeshi...
Continue
Global Greening 2021: here are the sites in Puglia that will be coloured green
St Patrick's Day is celebrated on 17 March all over the world. Some people think that the saint is most loved and celebrated in Ireland, the island he converted to Christianity by driving out paganism for good. In fact, in every country where Irish immigrants live there are celebratory events from Chicago, where the river is tinged with green, to Canada and Italy. Since 2010, one more initiative has embraced the world in the name of St Patrick: Global Greening. Puglia sites part of Global Greening 2021Global...
Continue
Borghi Photo Marathon 2018: photos and the award ceremony at the TTG in Rimini
Yesterday at the TTG Travel Experience, the main B2B tourism marketplace in Italy, was the award ceremony of the Borghi Photo Marathon 2018, a photo event organized by Yallers Italia in collaboration with Borghi Magazine, which saw photography enthusiasts working to capture the best of the colors and emotions of the selected villages. The president of the Yallers Italia association, Giorgio Monticelli, presented the award ceremony showing all the spirit of the association and, congratulating all the collaborators and sponsors, "di...
Continue