Share
History, charm and elegance. These are the adjectives attributed over time to Agnone, a town in the High Molise region, which boasts a unique bell tradition, a rich food and wine culture and an exceptional artisan past. Getting lost along the lanes of the historic center it is not uncommon to meet the ancient shops that were once the home of blacksmiths, shoemakers and goldsmiths.

A look at Agnone 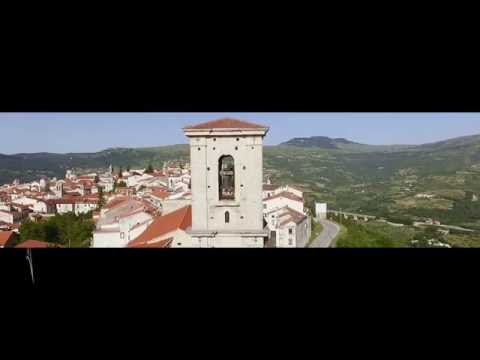 The village of Agnone (Agnèune in local dialect) is located in Molise. Ancient Sannite City, is home to the world's oldest bell-making factory, founded around the year 1000, and among the few who can be honored to use the pontifical coat of arms for their products. The hamlet would rise on the ruins of the Sannitic city Aquilonia, destroyed by the Romans during the Sannio conquest. An important center during the Longobard domination, then declined in the centuries immediately before the 1000, while the Verrino Valley and surrounding hills became the site of hermits, small monasteries and small colonies. In 1139 the powerful family of Borrello, Conti di Pietrabbondante and captain of ventura of Venice, brought to the place a considerable number of Venetian soldiers and artisans, probably from the Dalmatian colonies of the Serenissima. The venetian Venetian foundation of the village rises on the hill in front of Monte Caraceno due to the clear signs of Venetian culture observable in the original neighborhood, the one of Ripa, traditionally known as Borgo Veneziano. The importance of Agnone grew in the Angevin period and also in the Aragonese period, to the point that during the Bourbon Kingdom of the Two Sicilies, the city was among the 56 kingly cities directly dependent on the King, free from any other feudal, equipped with a high court, with the right to capital punishment. During the reign of Joachim Murat, the majority of the locals asked for a move to Molise, claiming the geographical difficulty of the Abruzzi links and hoping to take on a role in the new, small region (1811). The first disappointment got the Agnonesi immediately after this passage, for the three districts in which the Molise was divided had Larino, Campobasso and Isernia centers and capitals, excluding Agnone from any role of administrative dominance. In addition, Italy united, by reuniting Abruzzo and Molise in one region, actually overcome this problem. Flourishing by the breadth of the agro and by the number and volume of crafts, Agnone could develop, in the course of the 1800s, a large number of educated minds: doctors, philosophers, jurists, theologians, from which the honorary name of Athens Sannio. However, the price revolution linked to the first development of the Italian industry at the end of the nineteenth century did impede this balance, paving the way for the emigration phenomenon.

It is worth visiting the International Bell Museum and the Church of Saint Francis. No less interesting is the civil architecture of the village: the old town is of a clear Venetian style, in fact, venturing along the narrow streets of the ancient village you encounter frequently in the Venetian workshops and small stone statues depicting, Venetian lions. The Ancient Bottega Orafa, located in Corso Garibaldi, testifies to an ancient migration of lagoon artisans towards Agnone, which had happened centuries ago by the Borrello family. Interesting is the main square in the historic center, Plebiscito Square, formerly called Tomolo Square where, at the end of the nineteenth century, the Monument was inaugurated to the illustrious Libero Serafini citizen. Also in this square there are seven streets that start from as many other areas of the ancient village, which houses a characteristic marble fountain dating back to 1881 (the year of the construction of the first urban aqueduct of Agnese).

Another excellence of the hamlet of Agnone is the Confetto Riccio, whose origins are very ancient. The first official testimony dates back to 1839. It is a bigger than normal garment with a rugged, tender and friable surface. It is consumed fresh and can be stored under vacuum. The raw materials are: sugar, Avola almond, arabic gum and natural aromas. The almond is sprinkled with arabic gum to favor the covering with the sugar. In the "bassina" (large copper cauldron), as it rotates, sugar syrup is poured, crystallizing the almond and crystallizing it with the characteristic wrinkled form.

Piazza Cattedrale, Trivento (Campobasso)
15.45 Kilometers from Agnone
Rock Church of Sant'Antonio Abate
The Rock Church of Pietracupa in Molise, is located inside the Morgia overlooking the village fro...

A fantastic journey through the charming villages of Molise
Mentioned for the first time during the medieval period, Molise offers the incomparable opportunity to take a fantastic journey through its charming villages. The territory is not particularly large, but nevertheless, is able to offer the traveler a wonderful and varied panorama all to admire. To the eyes of those who arrive in this wonderful and generous land, there are horizons characterized by enchanting and different landscapes, where they...
Continue
4 villages not to be missed for designer craftsmanship
An extraordinary offer of craftsmanship, that of Italian villages, which includes ancient techniques and manual skills. Craft creations that in their creative forms give shape to typical works of their territories, becoming protagonists of themed itineraries that go beyond the playful aspect. Here, then, four villages in which the discovery of local crafts is worth a trip. Volterra (Tuscany) It is perched on the hills that separate th...
Continue
Recipe: The Christmas legend of the mostaccioli in the villages of Molise
According to the legend, the mostaccioli were given centuries ago to the Molisan peasants by a mysterious monk, who appeared suddenly and then disappeared into thin air. Before losing track, however, the monk revealed to a curious grower the ingredients of these desserts assuring him that, preparing them, he would find an appropriate name. The farmer returned home and asked his wife to make the biscuits following the recipe the monk had given him, adding the must. And here came the idea of the name, "mostacciolo", from the Latin "mos...
Continue
The spectacular Ndocciata of the village of Agnone
La Ndocciata is a spectacular traditional ritual that takes place in Agnone on December 8th and 24th. The event consists of a parade of large torches, built by hand with white fir wood and dried broom stalks, along the course of the village. The 'ndocce (torches), held together by string, can be up to two or three meters high and sometimes are joined by transverse posts to form large groups of torches.
Continue
Rock and poetry Agnone not to be missed!
Rock and poetry Agnone not to be missed! The festival Sonika Poietika is a summer event that follows the Poietika event that ended in Campobasso last 16 April. For five years the event has been such a success that it has also been repeated in summer. Sonika Poietika 2019 Sonika Poietika is a theatrical and musical review that from July 27 to August 4 will fill with music and verses some of the most beautiful towns of Molise including Agnone and Venafro. The village of Agnone will be the protagonist of an evening ...
Continue
The Bells from the village of Agnone, so beautiful to seduce the world
Italian craftsmanship is one of the pulsating hearts of our tradition, a history of great care of materials, great manuality and inventiveness and respect for every stage of the manufacturing process. It is a clear example of the medieval metallurgical art of the High Molise, which is rooted in the Sannitian culture, and reaches its highest expression in the manufacture of bells, one of the oldest in the wor...
Continue