Share
The village of Sorano, in Maremma, is defined the Matera of Tuscany, for its particular characteristic of urban planning numerous buildings cave dug into the tufa. Its territory lies in the eastern part of the area del Tufo. A series of thermal springs, known as Terme di Sorano, gush out along a creek which flows about 3-4 km south of the city center. 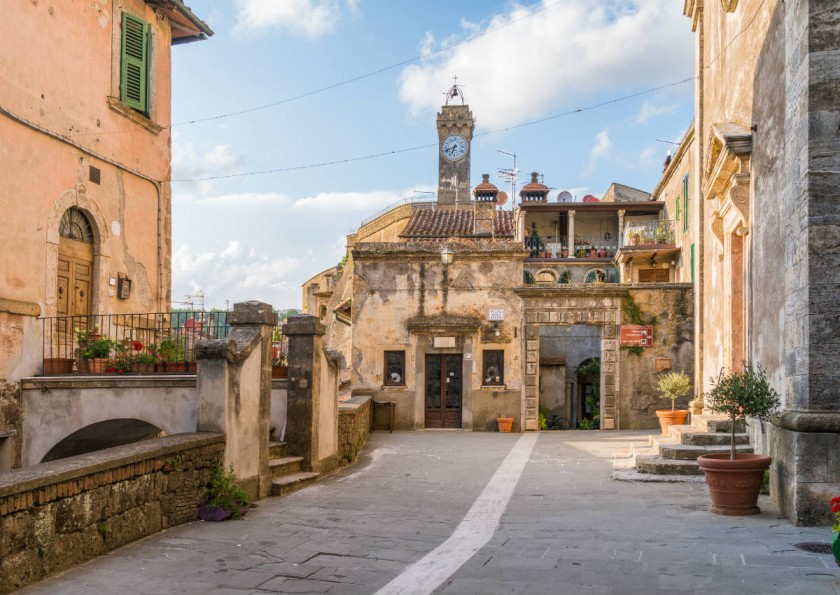 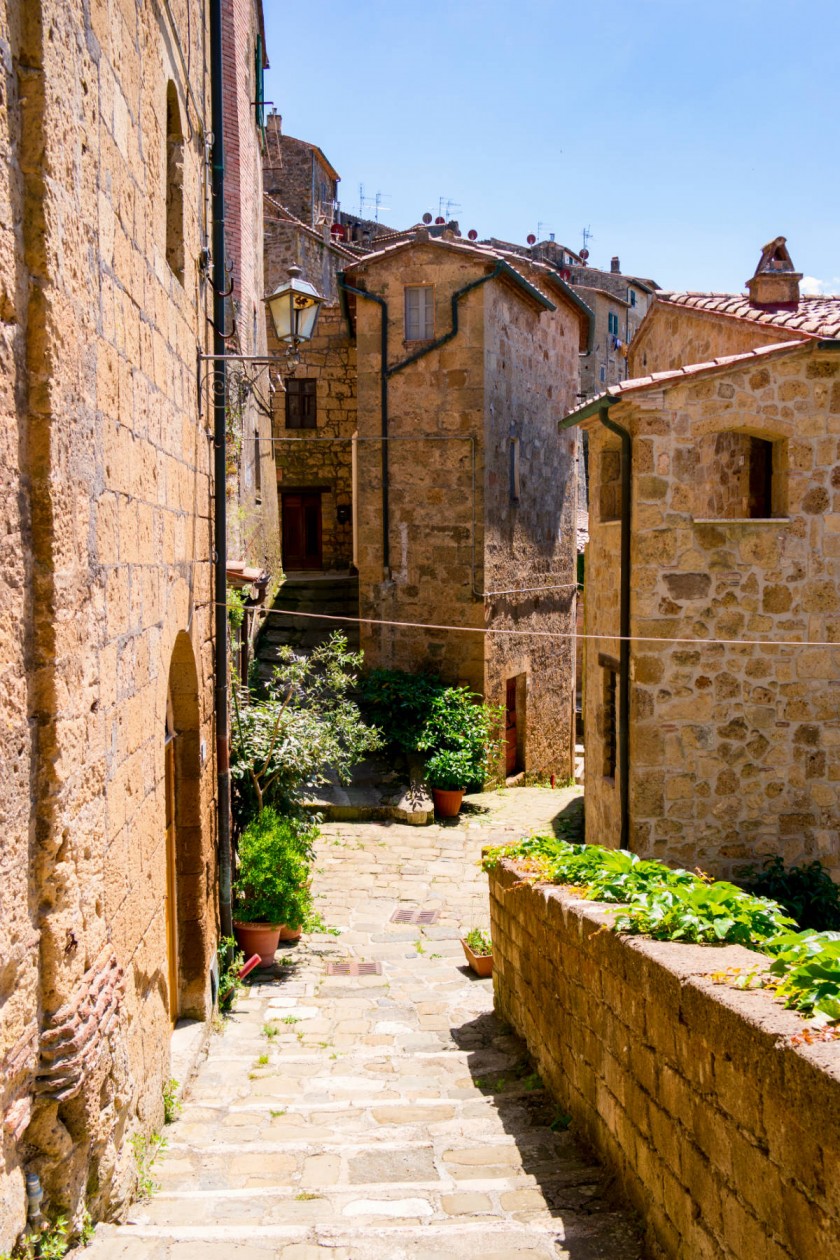 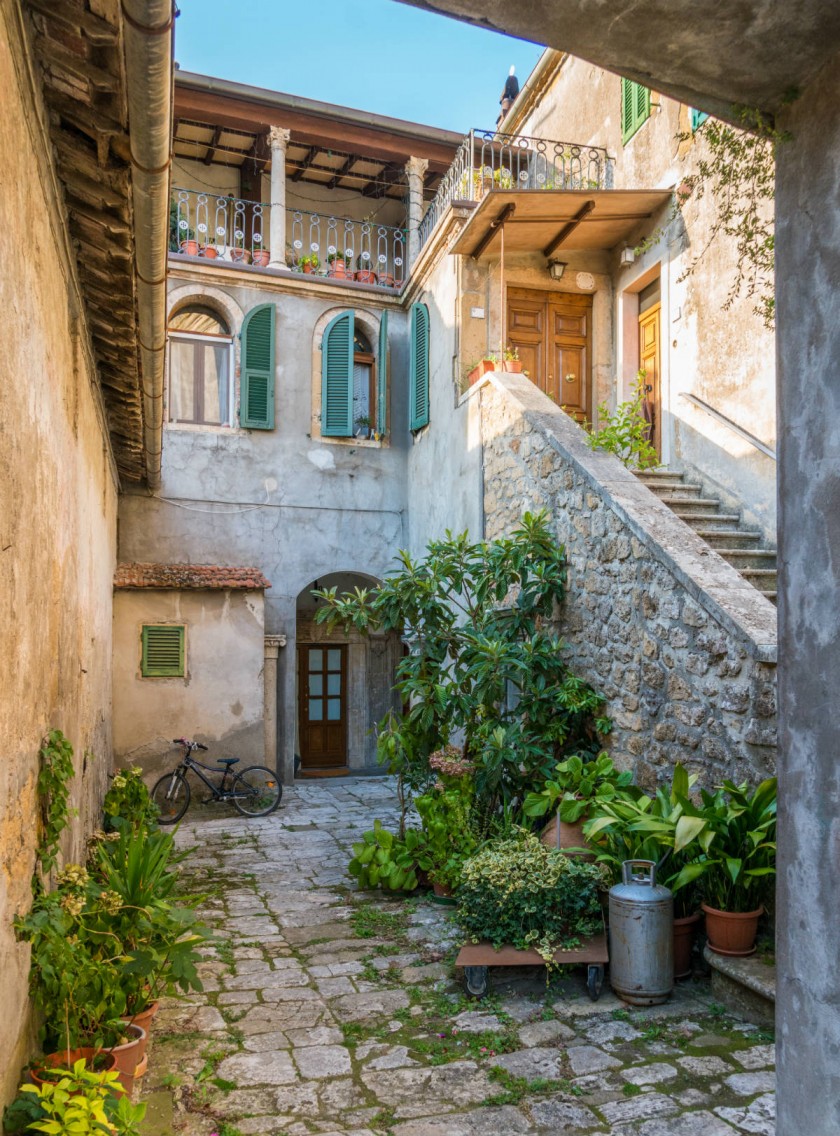 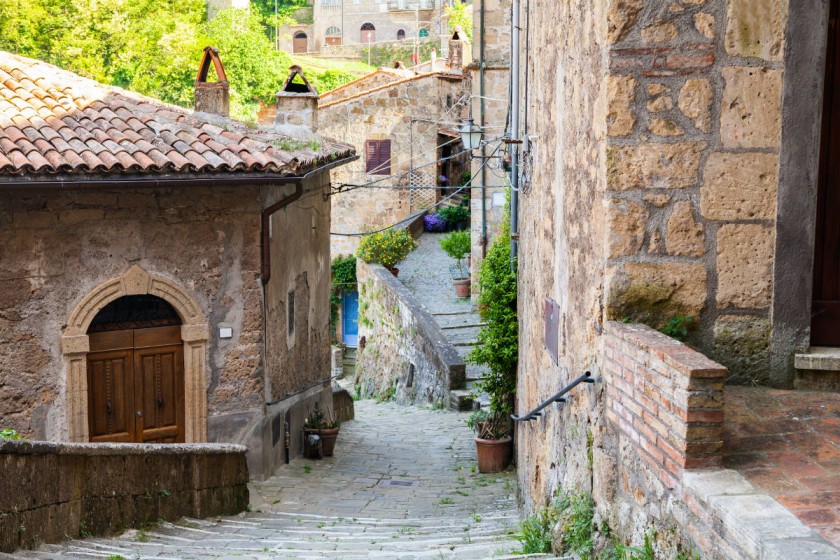 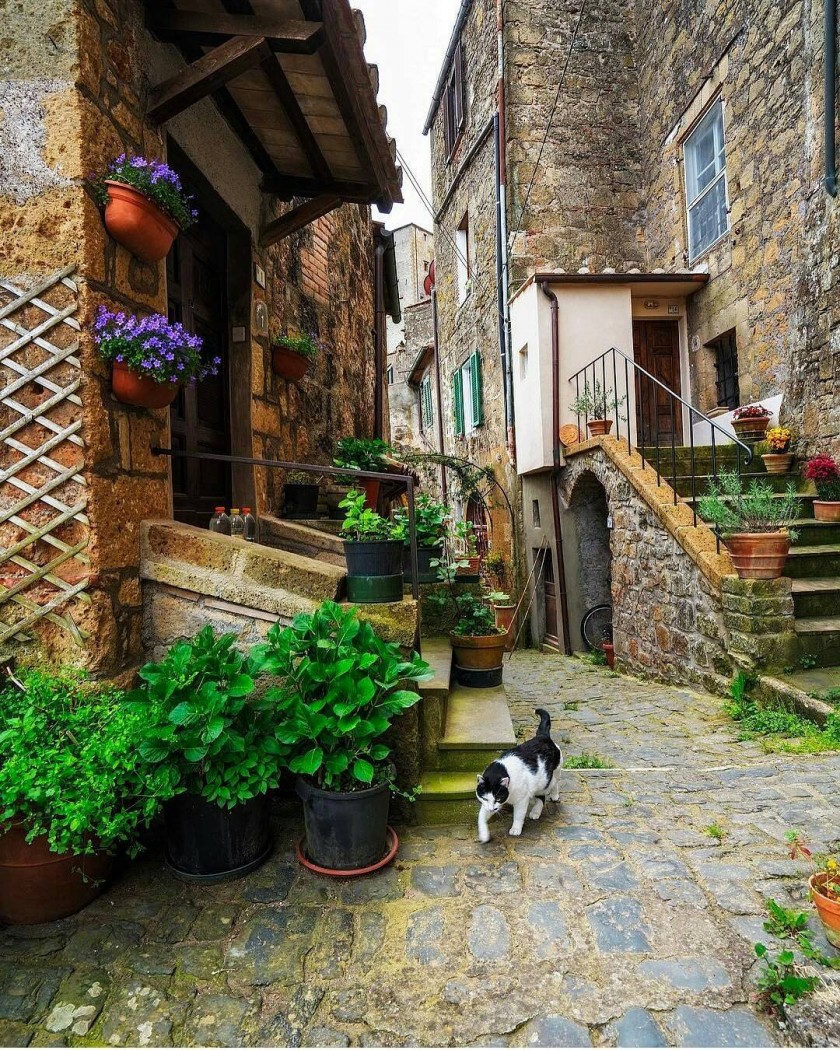 A look at Sorano 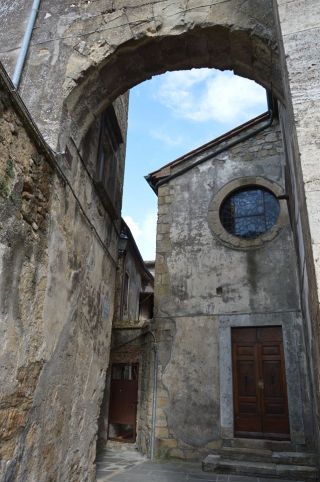 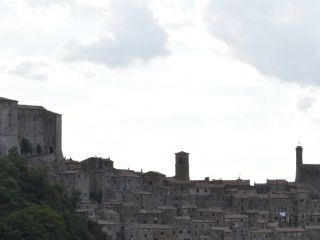 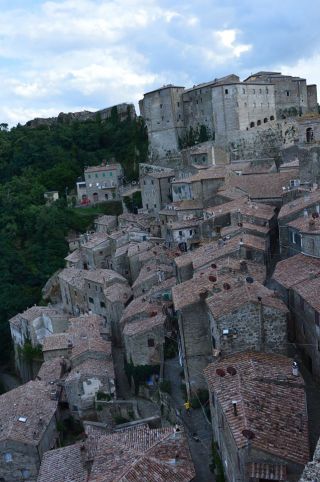 Sorano was born as an ancient estate of the Aldobrandeschi family, but the municipal territory was already inhabited since the Etruscan period, as demonstrated by the remarkable discoveries of settlements and ancient necropolis. After the marriage between Anastasia, the last heir of the Aldobrandeschi, and Romano Orsini in 1293, control of Sorano passed to the Orsini family. The center followed the vicissitudes of history and policies of the nearby Pitigliano, where it was located the residence of the counts, and the Orsini undertook to boost it fornendolo of effective fortifications, which rendered Sorano a safe haven from attacks enemies: several times in fact, in the course of the XV century, the Sienese posero the fortress of Sorano under siege, succeeding to occupy it only in 1417. In 1556, Sorano passed into the hands of the Medici who inglobarono in the Grand Duchy of Tuscany together with the nearby Pitigliano.

The village still preserves the Jewish Ghetto along the homonymous track, where he was also attested to the presence of the Synagogue and of the oven of the unleavened breads. Another synagogue, now transformed by the municipal administration locally for exhibitions, would have been identified along the "via Selvi" and dates back to periods prior to the imposition of the ghetto itself as the Jewish settlement would be prior to the latter at least 50/60 years. The ghetto was established by doctors in 1619 after it was carried out the exchange of territories of the county of Pitigliano and Sorano with those of the county of Monte San Savino between the Orsini family and the doctors themselves. The Jewish community abandoned Sorano in the early twentieth century. After the last World War the ghetto of Sorano departed to a phase of degradation without precedent that reached its culmination and total abandonment to the early nineties. It was in that period that, thanks to a targeted action of the Municipal Administration of the epoch, was initiated a reversal of the trend that led to the involvement of private economic operators, which effettuarono a careful restoration and upgrading of all buildings of the ghetto, returning it to its ancient vestiges. Some signs that recall the presence of the Jewish community in Sorano are visible on the doors of the gate of the entrance of the building that houses the Hotel "Locanda Aldobrandeschi", to the side of which there is still an ancient structure that was used for the storage of grain as a guarantee in the so-called "loan to wheat". At the entrance of the ghetto there are also still visible signs of the hinges where revolved the gate that closed the ghetto itself at dusk to then be reopened the next morning.

Sorano is perched so picturesque on a steep tufaceous cliff that has various inclines. The village is also characterized by a maze of alleys, courtyards, arches, portals ashlar work, external stairs, loggias and cellars dug into the tufa where in the past were performed on the various phases of the harvest. Around the historical center, Sorano owns a small urban area, developed in an orderly manner from the sixties of the twentieth century thanks to urban interventions regulators. From the point of view of urban architecture indicates the Zone 167, made of tufa and commonly known with the name of New Houses, attempt to merge contemporary architecture and modern needs with the environment of tuff rock and an ancient context now consolidated: the district was built between 1969 and 1976 on behalf of I.A.C.P. of Grosseto, on a project by Lanfranco Welcome, Paolo Borghi and Luigi Rafanelli; among the buildings of major importance is the condomino-tower of viale Brigate Partigiane, as the most representative among the modern architectures that form the skyline of Sorano.

The village stands on a tufa spur that dominates the valley of the Lente river and was already inhabited in Etruscan. In the Eighteenth century the cliff was fortified to the north of the village, called Sasso Leopoldino. The neighborhoods close to the Sasso already at the beginning of the twentieth century began to see their populations drift away, due to the progressive erosion of the block of tufa. In 1929 a royal decree provided the population to transfer in another place, fortunately never happened, otherwise today Sorano would not exist more. The stabilization of the phenomenon of erosion and the rehabilitation and reuse of numerous houses uninhabited and crumbling, have saved this extraordinary village.
If you look at the district at the Porta dei Merli, with the houses perched overlooking the river, the impression is that of a ensemble suggestive and organic: what a romantic sensitivity would call "quaint". With the definitive consolidation of the cliff, Sorano has returned to live. Closed to the south by the powerful Orsini Fortress and to the north by the rocky crest of the Sasso Leopoldino, the village at the top of the latter opens in a terrace that allows an impressive view on the underlying village, surrounded by deep ravines, and on the ridges of tufa that delimit the other side of the river.

Piazza del Pretorio, Sorano (Grosseto)
6.19 Kilometers from Sorano
Synagogue of Pitigliano
the settlement of the Jewish community in Pitigliano, in Tuscany, took place after the second hal...

Terziere di Borgo, Santa Fiora (Grosseto)
19.48 Kilometers from Sorano
Cassero Senese
The Cassero Senese in Massa Marittima is a fortified structure located in the high part of the hi...

Find where to sleep in Sorano

Poderi di Montemerano - 58014, Manciano (Grosseto)
18.82 Kilometers from Sorano
The Garden of the historic center
in the village of Montemerano, two steps away from the Thermal Baths of Saturnia and from those o...

Via Arenile, 3, Castiglione della Pescaia (Grosseto)
67.89 Kilometers from Sorano
The Garden of the historic center
in the village of Montemerano, two steps away from the Thermal Baths of Saturnia and from those o...

Strada Provinciale delle Rocchette, snc, 58043, Castiglione della Pescaia (Grosseto)
75.79 Kilometers from Sorano
Tenuta Il Cicalino
Located at the foot of the medieval village of Massa Marittima, in the picturesque setting of the...

Località Poggio Bertino, 18, Montemerano, Manciano (Grosseto)
17.94 Kilometers from Sorano
Trattoria Verdiana
It is a place of simple elegance, where, in winter, you can eat in front of the fireplace and in ...

SP159, località Ponticello,, Manciano (Grosseto)
19.27 Kilometers from Sorano
Vecchia Osteria Cacio e Vino
Every dish is matched to a particular wine. You can taste delicious local dishes in a friendly at...

Via del Bivio, 16 - 58014, Manciano (Grosseto)
19.45 Kilometers from Sorano
Vecchia Osteria Cacio e Vino
Every dish is matched to a particular wine. You can taste delicious local dishes in a friendly at...

Via del Bivio, 16 - 58014, Manciano (Grosseto)
19.45 Kilometers from Sorano
Trattoria Verdiana
It is a place of simple elegance, where, in winter, you can eat in front of the fireplace and in ...

Sorano is present in issue 4 of our digital magazine e-borghi travel.
Read it now!

Our news about Sorano

Pitigliano, Sorano and Sovana: the tuff villages
In the center of Italy there are beautiful villages that fall within the area of the Archaeological Park of Tufo, a very large and interesting area that includes Pitigliano, Sorano and Sovana. The whole area is characterized by some Cavoni, like canyons that stand out for the tuff walls, from which it takes its name. In this area you can also see many Etruscan necropolis remained partially identical and literally dug and carved into the tuff. ...
Continue
The 10 most beautiful villages set in the rock
The Italian territory is rich in wonderful landscapes. Some of the places able to combine history and charm are the villages. From north to south, the villages are numerous and scattered in every region. They can be found in the most varied places: from islands to inland areas, from lakes to mountains, from hidden bays to jagged cliffs. But each of them is capable of making anyone who takes the time to visit them fall in love. Among the most c...
Continue
5 among the most beautiful and characteristic italian villages set in the rock
It opens another view of the hidden wonders of the Mediterranean boot, chosen for you five of the most beautiful villages in Italy set in the rock, places where nature and architecture coexist in perfect balance giving life to glimpses and landscapes unique in the world. Our journey begins with Sorano, a village with unique and enchanting atmospheres, in the province of Grosseto, in the Tuscan Maremma. Also called "The Matera of Tuscany", t...
Continue
Montebelli Agriturismo and Country Hotel of Caldana, elixir of Maremma, nature and villages
Magliano in Toscana, Montemerano, Santa Fiora. And then Scansano, Sorano, Sovana, all villages in the province of Grosseto, each with a story to tell, a contribution of beauty and history to Italy. To discover a starting point there must be and an address to be scored is Montebelli Agriturismo & Country Hotel in Caldana, in the province of Grosseto and in the intriguing Maremma. A structure in which to wake up with...
Continue
Hotel Torre di Cala Piccola, intrigue of the Argentario, villages of tufa and Etruscan curiosities
It is a dive into an enchanted place, the one that leads to the Argentario, whose name does not derive from the presence of silver but, more likely, from the brightness of its rocks. A corner of Tuscany to be discovered following the perimeter of the rocky coast, jagged by continuous inlets one more beautiful than the other, shining with turquoise and cobalt colored waters. And the Hotel Torre di Cala Piccola, in Porto Santo Stefano, is the pe...
Continue
Unique Tuscan villages to Love - Download a free travel guide to the 51 certified Tuscan villages
It has recently been made available a free travel guide by Toscana Promozione Turistica, in Italian and English, about 51 Tuscan villages certified in the Borghi più Belli D'Italia, Paesi Bandiera Arancione, Mibact's Gioielli d'Italia and UNESCO World Heritage Sites. The volume, edited by Claudio Bacillieri, director in chief for Borghi Magazine, accompany th...
Continue