Share
A splendid village located in the Tufo Area, Pitigliano is nicknamed "The Little Jerusalem", since starting from the 16th century it hosted a large Jewish community within its walls. One of the most fascinating historic villages, it stands imposingly on the valleys of the Lente, Meleta and Prochio streams, offering a wonderful view of the wild and unspoiled nature of this area of the Tuscan Maremma. 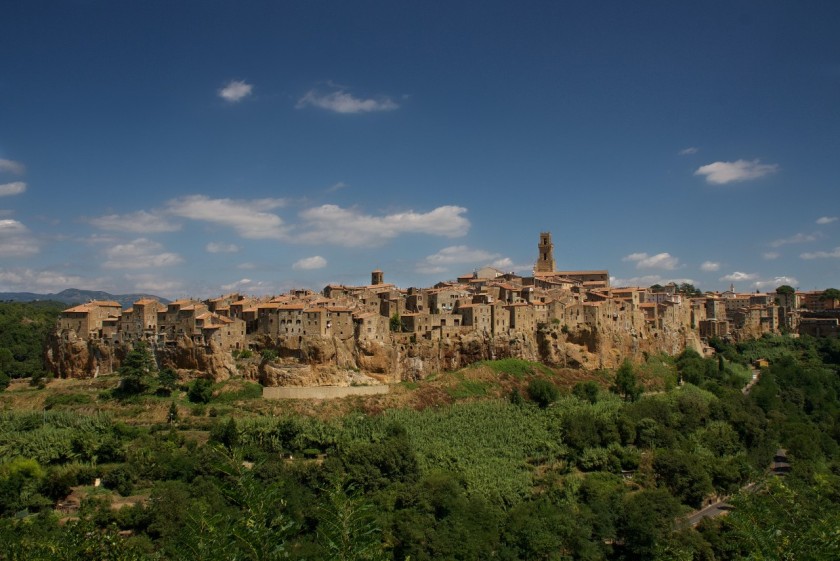 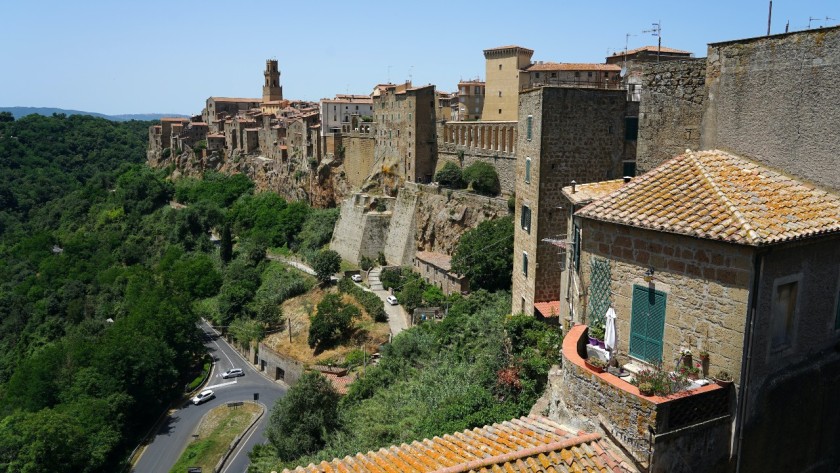 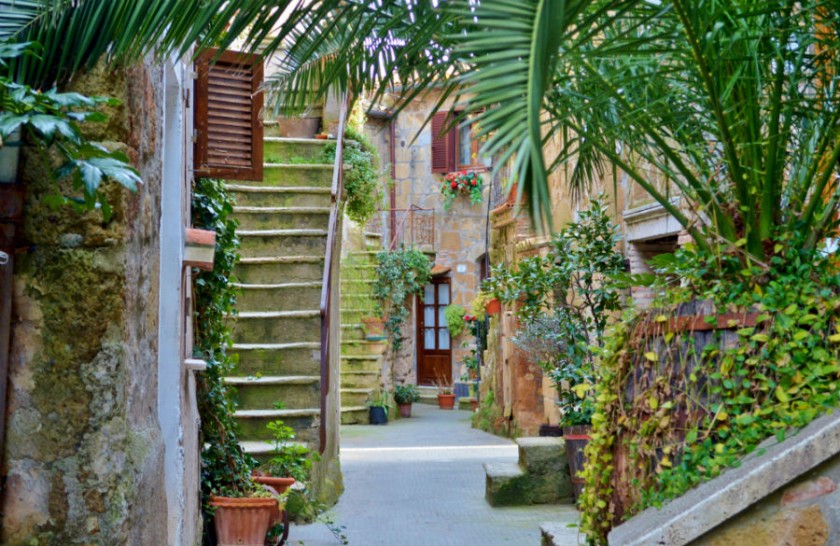 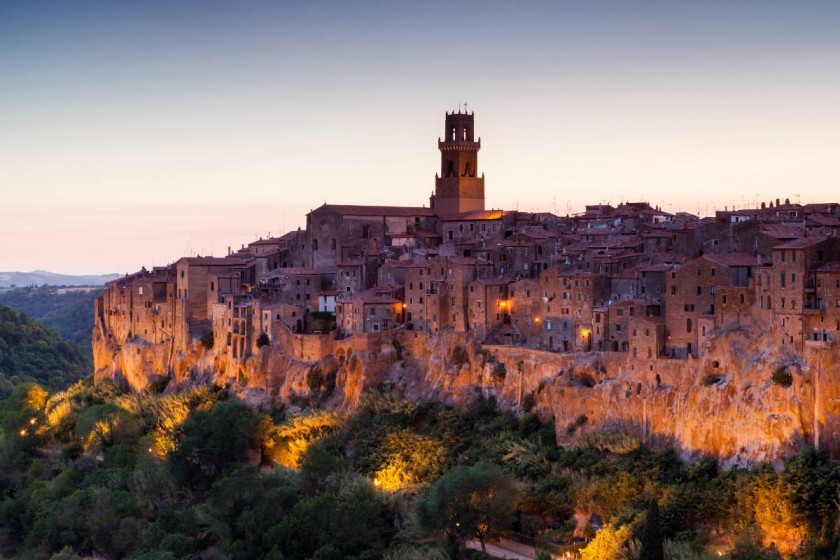 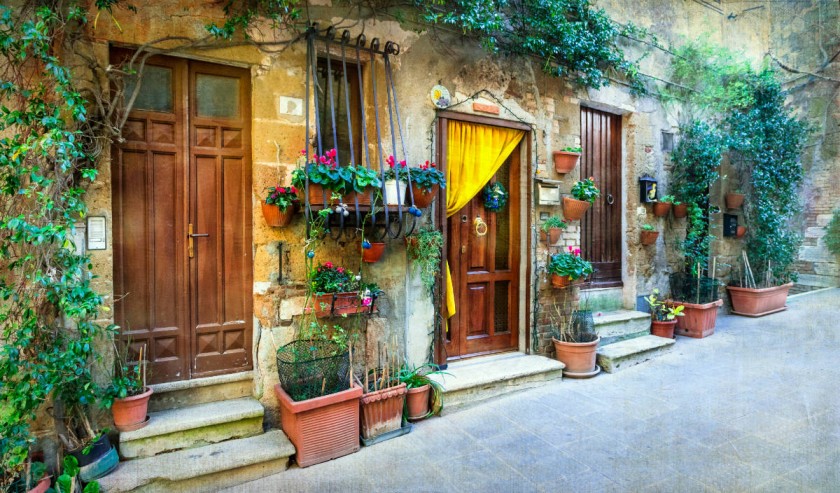 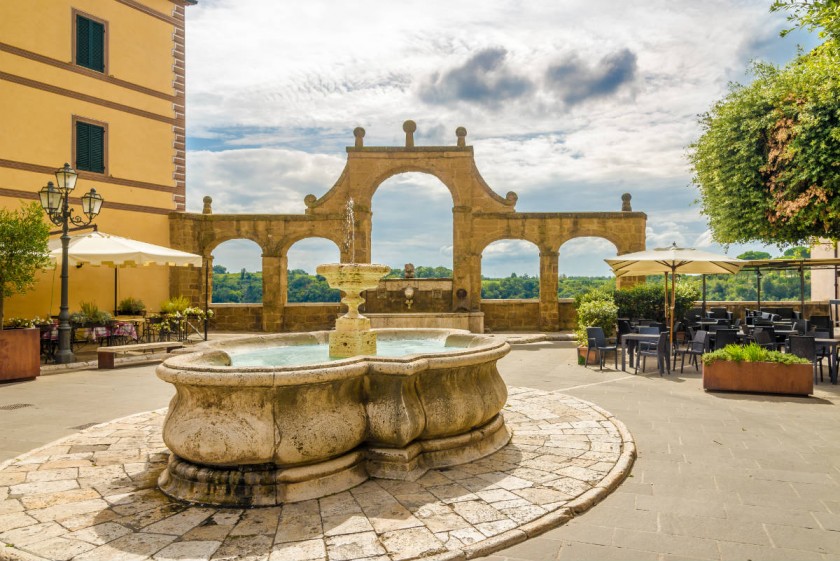 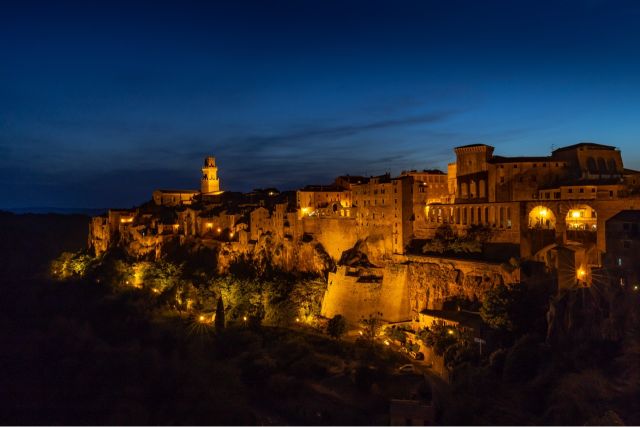 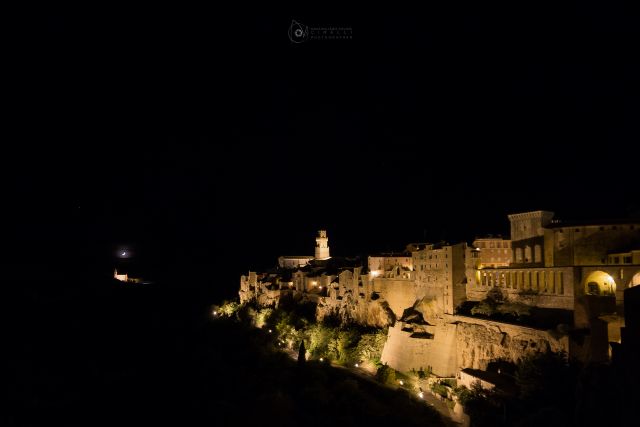 Pitigliano in its night dress with a beautiful ...
Massimiliano D. Cirelli - e-borghi Community 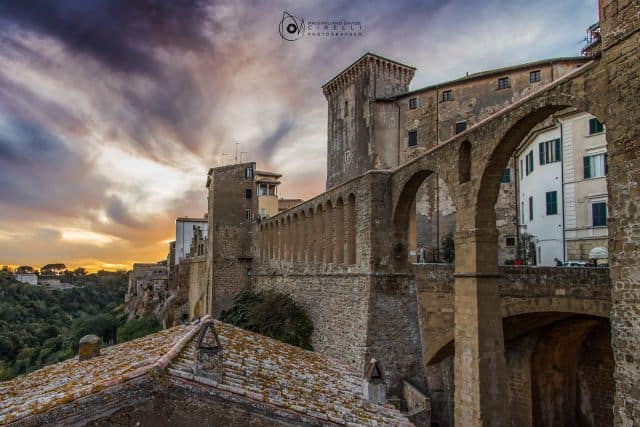 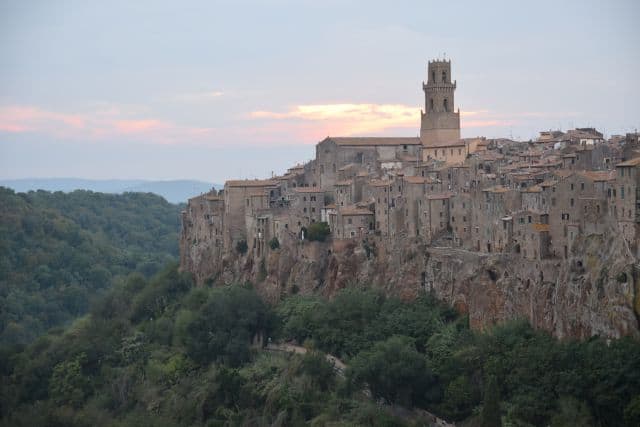 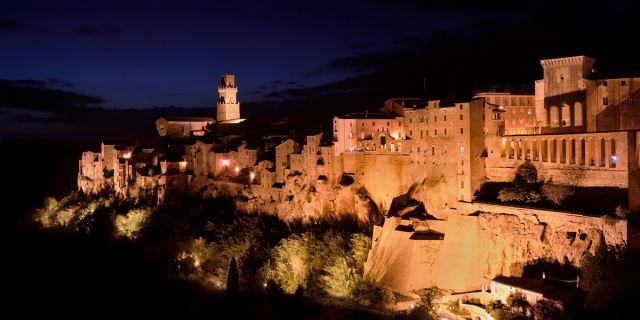 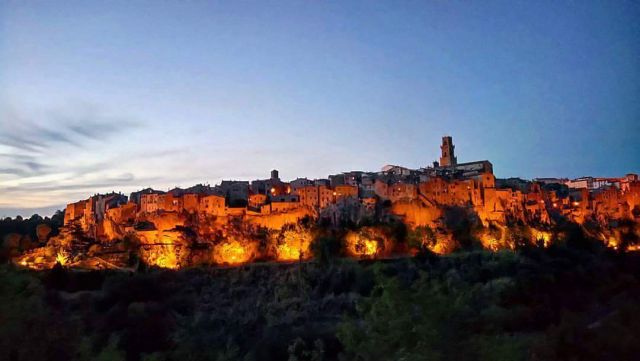 #lucideiborghi Pitigliano at the sunset.. It's...
Cristina Santoro - e-borghi Community 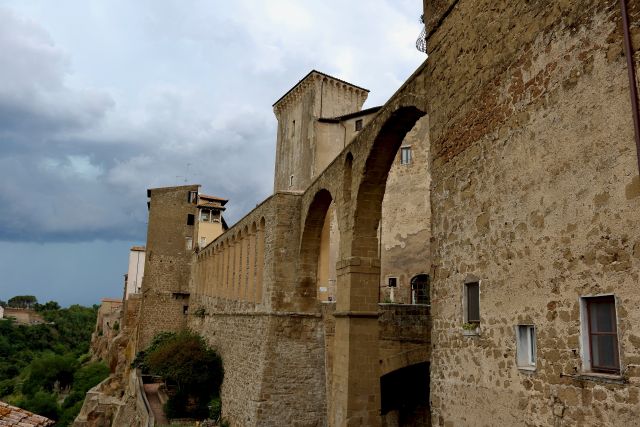 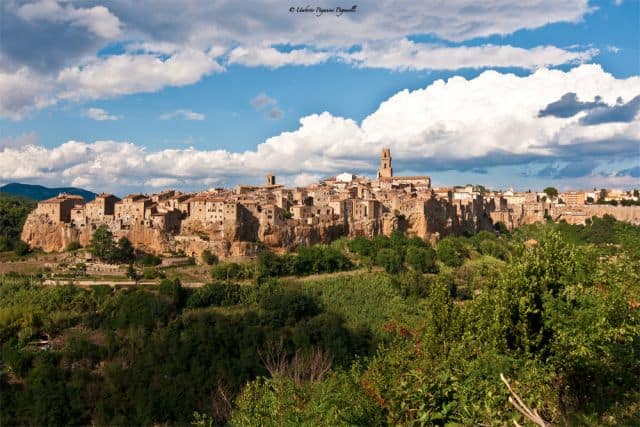 The characteristic village of Pitigliano is known as Little Jerusalem, for the historical presence of a Jewish community, always well integrated in a social context that here had their synagogue.

The territory extends in the western part of the area del Tufo. Arriving at Pitigliano from sea, climbing the regional road 74 Maremmana, you notice the characteristic houses that protrude from a great tuff spur, absolutely overhanging. The cliff of Pitigliano is surrounded on three sides by the same number of gullies, full of caves dug into the tufa; in the valley bottom slide watercourses Lens Meleta, and Prochio.

Pitigliano was already a place frequented and inhabited since Etruscan times, when here were founded numerous settlements excavated in the tufa and attested to by the late Bronze Age (XII-XI century a.C.). Even in the place where now stands the town was located an Etruscan center, witnessed by the remains of the walls that were discovered in the district of Capisotto and then disappeared between the end of the VI and the beginning of the V century b.c. The first news of Pitigliano appears in a bubble sent from Pope Nicholas II to the provost of the cathedral of Sovana in 1061, where it is already indicated as the place of jurisdiction of the family of the counts of Aldobrandeschi. In 1293 Anastasia, daughter of Countess Margherita Aldobrandeschi, married Romano Orsini bringing a dowry in the county of Sovana and the county seat was transferred to Pitigliano. The Orsini ruled the county of Pitigliano for centuries, difendendole by continuous attempts of submission by Siena and Orvieto before and the Medici Florence then.

Palazzo Orsini, an imposing fortified palace, built as a fortress by the Aldobrandeschi (XI-XII century) and then seat of the county of the Orsini, has been restructured consistently in the XVI century at the behest of Niccolò Orsini, on the project of the engineer Antonio da Sangallo the Younger. The complex houses the Diocesan Museum of Palazzo Orsini, rich in works of art that cover a period of time from the Middle Ages to the modern age, and the Civic Archaeological Museum, where are kept various finds coming from the nearby archaeological areas.

The Torciata di San Giuseppe is a traditional pitiglianese feast, which takes place every 19 march to celebrate the arrival of spring. The event consists of a historical parade in costume that parade through the streets of the historical center before you arrive in piazza Garibaldi, where we are seeing the spectacle of flag-wavers and, once the sunset, the fire by torciatori of a stack of faggots on which was placed a snowman of reeds, called "invernacciu", that is to symbolize the winter. Consumed the bonfire, the ashes are collected by women and preserved in homes as a sign of good luck.

People who drive along the S.S. 74 Maremmana in direction of the sanctuary of the Madonna delle Grazie, cannot go without stop, enchanted and almost incredulous for the spectacle that is located ahead: the village of Pitigliano, suspended on its tufa cliff between green valleys. It is a magic vision, a lighting. The town of Pitigliano, totally built in tufa, is inserted into the landscape with such a compactness that it is almost impossible to separate the work of man from that of nature.
Here men over the centuries have preferred to dig more than to build. Thanks to the ease of working the volcanic rock, here was born a "civilization of tufa" of which have left impression the Etruscans, the people of the netherworld, and Jews, the people of the law. Digging tenaciously down to the bowels of the ground, the Etruscans built tombs, hypogea, tunnels and the mysterious "vie cave": their world was of dungeons, as if only entering into heart of the earth, by cutting the rock, could grasp its profound spirituality, to defeat the fear of death and go back to the light of the sun. Also the Jews who lived at Pitigliano for five hundred years, placed in caves the environments of their worship. Still today the spectacular town of Pitigliano hides under himself another underground city, made of rupestrian speakers, galleries and tunnels for water drainage, columbaria with the recesses for pigeons, stables, cellars and ancient rupestrian houses transformed into warehouses. In these environments are still vats, barrels, presses, crushers.

Via Giovanni Selvi, 7, Sorano (Grosseto)
6.47 Kilometers from Pitigliano
Spanish Fortress
The Spanish Fortress of Porto Ercole in Tuscany was one of the defensive ramparts of the promontory.

Find where to sleep in Pitigliano

Poderi di Montemerano - 58014, Manciano (Grosseto)
13.66 Kilometers from Pitigliano
The Garden of the historic center
in the village of Montemerano, two steps away from the Thermal Baths of Saturnia and from those o...

Strada Provinciale delle Rocchette, snc, 58043, Castiglione della Pescaia (Grosseto)
73.17 Kilometers from Pitigliano
The Garden of the historic center
in the village of Montemerano, two steps away from the Thermal Baths of Saturnia and from those o...

Via di Mezzo Franco, 10 Loc.Campese - 58012, Isola del Giglio (Grosseto)
71.29 Kilometers from Pitigliano
Tenuta Il Cicalino
Located at the foot of the medieval village of Massa Marittima, in the picturesque setting of the...

Località Poggio Bertino, 18, Montemerano, Manciano (Grosseto)
13.58 Kilometers from Pitigliano
Vecchia Osteria Cacio e Vino
Every dish is matched to a particular wine. You can taste delicious local dishes in a friendly at...

Via del Bivio, 16 - 58014, Manciano (Grosseto)
14.68 Kilometers from Pitigliano
Trattoria Verdiana
It is a place of simple elegance, where, in winter, you can eat in front of the fireplace and in ...

SP159, località Ponticello,, Manciano (Grosseto)
14.75 Kilometers from Pitigliano
Trattoria Verdiana
It is a place of simple elegance, where, in winter, you can eat in front of the fireplace and in ...

SP159, località Ponticello,, Manciano (Grosseto)
14.75 Kilometers from Pitigliano
Vecchia Osteria Cacio e Vino
Every dish is matched to a particular wine. You can taste delicious local dishes in a friendly at...

Via del Bivio, 16 - 58014, Manciano (Grosseto)
14.67 Kilometers from Pitigliano
= distances as the crow flies
Stanghellini Oil Mill
Frantoio Stanghellini, located in Valpiana in Massa Marittima, has been a family-run business for...

Pitigliano is present in issue 4 of our digital magazine e-borghi travel.
Read it now!

Our news about Pitigliano

Fusion between architecture and nature: the most fascinating stone villages in Italy
Embedded in the most solid natural element, stone villages are among the most spectacular building agglomerates in the whole of the Bel Paese. Let's set off to discover some of the best, to mark for an upcoming vacation or trip out of town. From Piedmont to Liguria: Chianale and Apricale The beautiful village of Chianale, nestled in an area on the border between Piedmont and France, is located in the upper Varaita Valley and is surrounded by ...
Continue
The villages in the hills
Italy is rich in villages, those small urban agglomerations with an intimate dimension and rarefied atmosphere that so enchant anyone lucky enough to set foot there: they are small jewels, born in a very distant past and developed around fortified citadels that still show all their secular grandeur.Among the most enchanting Italian landscapes there are the hilly ones, where hillocks, vineyards, castles and above all picturesque villages altern...
Continue
Pitigliano, Sorano and Sovana: the tuff villages
In the center of Italy there are beautiful villages that fall within the area of the Archaeological Park of Tufo, a very large and interesting area that includes Pitigliano, Sorano and Sovana. The whole area is characterized by some Cavoni, like canyons that stand out for the tuff walls, from which it takes its name. In this area you can also see many Etruscan necropolis remained partially identical and literally dug and carved into the tuff. ...
Continue
The 10 most beautiful villages set in the rock
The Italian territory is rich in wonderful landscapes. Some of the places able to combine history and charm are the villages. From north to south, the villages are numerous and scattered in every region. They can be found in the most varied places: from islands to inland areas, from lakes to mountains, from hidden bays to jagged cliffs. But each of them is capable of making anyone who takes the time to visit them fall in love. Among the most c...
Continue
5 among the most beautiful and characteristic italian villages set in the rock
It opens another view of the hidden wonders of the Mediterranean boot, chosen for you five of the most beautiful villages in Italy set in the rock, places where nature and architecture coexist in perfect balance giving life to glimpses and landscapes unique in the world. Our journey begins with Sorano, a village with unique and enchanting atmospheres, in the province of Grosseto, in the Tuscan Maremma. Also called "The Matera of Tuscany", t...
Continue
Hotel Torre di Cala Piccola, intrigue of the Argentario, villages of tufa and Etruscan curiosities
It is a dive into an enchanted place, the one that leads to the Argentario, whose name does not derive from the presence of silver but, more likely, from the brightness of its rocks. A corner of Tuscany to be discovered following the perimeter of the rocky coast, jagged by continuous inlets one more beautiful than the other, shining with turquoise and cobalt colored waters. And the Hotel Torre di Cala Piccola, in Porto Santo Stefano, is the pe...
Continue
Sfratti of Pitigliano
We are in the territory of the Tuscan villages, a region very much linked to the history of its inhabitants and popular traditions, especially in the preparation of typical dishes. The traditional cookies of Pitigliano are the Sfratti, currently very appreciated not only in the Tuscan village, but also in the rest of Italy.The Sfratti di Pitigliano are large cookies and are filled with a very tasty filling of dried fruit and aromas. There are several bakeries in the town to still bake these characteristic sweets. The origin of...
Continue
Recipe: the Sfratto dei Goym from Pitigliano, in the province of Grosseto
ALSO FOR VEGANS For this week’s recipe ...
Continue
10 things to do in 10 Italian villages, great classics and unexpected surprises
Did you know that in the village of Glorenza there is the only Italian whiskey distillery? And what is the Pinocchio Park in Collodi? Curiosities and ideas to live as protagonists all the magic of the villages of our Peninsula... Here are 10 Italian villages to discover and experience with many things to do. Ideas and curiosities for all tastes and for every season.
Continue
Unique Tuscan villages to Love - Download a free travel guide to the 51 certified Tuscan villages
It has recently been made available a free travel guide by Toscana Promozione Turistica, in Italian and English, about 51 Tuscan villages certified in the Borghi più Belli D'Italia, Paesi Bandiera Arancione, Mibact's Gioielli d'Italia and UNESCO World Heritage Sites. The volume, edited by Claudio Bacillieri, director in chief for Borghi Magazine, accompany th...
Continue