Share
Located a few kilometers from Via Emila, on the top of Mount Cesubeo, stands Bertinoro. Considered the "Balcony of Romagna" but not only, the town retains its medieval aspect, due to the presence of walls, towers and ancient houses. "City of Hospitality" par excellence, Bertinoro also has the recognition of City of Wine.

Column of the twelve rings

A look at Bertinoro 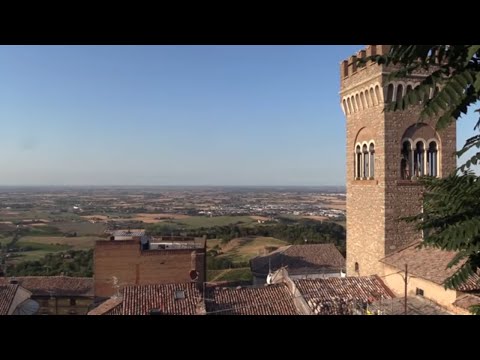 Bertinoro, part of the Authentic Villages of Italy, is located on the hills of Romagna a few kilometers from the Via Emila, on the top of Mount Cesubeo.
Considering the splendid panoramic view that you can enjoy from Bertinoro, it is also defined as Balcony of Romagna.
Of medieval origin, the citadel is rich in walls, towers and ancient houses.

According to a legend, it would seem that Galla Placidia, daughter of the Emperor Theodosius, passing through these places, tasted a wine served in a humble cup,and said: «Wine, not so crude chalice you are worthy of, but of drinking you in gold», hence the name of the city.

The origins of the village are very likely dating back to prehistoric times, thanks to the discovery of the remains of a well, in the locality of Panighina, about two kilometers from the center of Bertinoro.
Among the remains, bowls and other objects that testify some cults related to healing waters stand out. In the High Middle Ages the peaks of Mount Cesubeo and Monte Maggio were equipped with a defensive fortification.
During the reign of Otto III, the archbishop of Ravenna, whose influence reached these lands, ordered the demolition of the fortress of Monte Maggio, obliging its inhabitants to move to the Castrum Cesubeum, which later became Castrum Brittinori.

In the millennial fortress on Mount Cesubeo, emperor Federico Barbarossa stayed in 1177 with his court and his militia, which then became a bishop's seat from 1584.
Even today the defensive structure keeps its medieval aspect well preserved. Inside there are the offices and apartments of the ancient bishop's residence, a large terrace facing the village and the great seventeenth-century room decorated with Baroque frescoes.

Today the Rocca  houses also the University Residential Center of the Alma Mater Studiorum in Bologna and the Interreligious Museum.

Bertinoro is the "City of hospitality" par excellence, thanks to the tradition of the Column of the twelve rings and, thanks to its wines, it has the recognition of "City of Wine". The cooking is full of first courses created by the hands of the sfogline, who work the dough with a rolling pin. Freshly prepared, in the various kiosks of the town, is piadina, a typical bread from Romagna.

Inhabitants: 10.947
Altitude center: 254 m s.l.m.
the Municipality is part of:
Borghi Autentici d'Italia
Città del vino
Strada dei Vini e dei Sapori dei Colli di Forlì Cesena
Patronal feast
Santa Caterina - 25 novembre
Municipality of Bertinoro
Piazza Liberta'1 - Bertinoro (FC)
tel: 0543469111
The Column of the Rings
The Column of the twelve rings is the symbol of Bertinoro
Piazza della Libertà - 47032, Bertinoro
Inter-religious Museum of Bertinoro
The Interreligious Museum is set up in the medieval secrets and in the sixteenth century cistern ...
Via Frangipane, 6 - 47032, Bertinoro
Pieve di San Donato in Polenta
The church of San Donato in Polenta is famous for the poem composed by Giosuè Carducci
Via Polenta, 480 - 47032, Bertinoro
Castle of the Governor or Captain of the Square
The Governor's Castle dominates the Roman Gate towards Forlì.

Via Ciola, 93 , Castrocaro Terme e Terra del Sole (Forli Cesena)
15.86 Kilometers from Bertinoro
Territorial Museum
The Territory Museum collects about 6,000 finds coming from the territory of Longiano and from th...

Via Giannini, 16, Longiano (Forli Cesena)
17.40 Kilometers from Bertinoro
Malatesta Castle and Balestra Collection
The Malatesta Castle of Longiano is the permanent home of the contemporary art collection of the ...

Via Porta del Girone, 14, Longiano (Forli Cesena)
17.42 Kilometers from Bertinoro
The Basilica of San Vicinio
The chapel which closes the right nave preserves the relics of San Vicinio and its thaumaturgical...

Via Cesio Sabino, 39, Sarsina (Forli Cesena)
25.47 Kilometers from Bertinoro
Palazzo Pretorio
Praetorian Palace was originally the seat of the Court of first instance for all Tuscany Romagna....

Bertinoro is present in issue 2 of our digital magazine e-borghi travel.
Read it now!

Bertinoro: hospitality, thermal baths, wine and... the secret of Spungone

Recipe: the Spoja Lorda Romagnola
The spoja lorda romagnola is a typical feast dish that every real azdora (the real lady of the kitchen in Romagna) could do with your eyes closed! Also called the stuffed soup the spoja (puff pastry in dialect) is a delicate egg pasta (very similar to the Emilian puff pastry) filled with cream cheese, cooked in capon broth or hen which is then 'dirtied' (gross from which gross) with the stuffing. They have the appearance of small squares, about two centimeters on each side, made with the spur, the typic...
Continue
The issue dedicated to the well-being of e-borghi travel is online
"I don’t think a man is free if he’s never in leisure” by Marco Tullio Cicerone (106 a.C. - 43 a.C.) whose quote has been running along the centuries and it has reached the third millennium to be so contemporary to be found on Facebook. So the holistic archetype “salus per aquam” (the health through the water) is not surprising and it’s very modern: the physical and mental well-being comes before the renewal of yourselves. So take it is easy, slow-down, travel in Italy and discover the villag...
Continue