Share
Sarsina is a village full of history and tradition located on the Tuscan-Romagna Apennines and birthplace of Tito Maccio Plauto, the greatest Latin playwright. The testimonies of the history of Sarsina are kept, not only in the Archaeological Museum and in the Basilica of San Vicinio, but also in the whole of the Historic Center, the Museum of Sacred Art and the small but charming medieval village of Calbano. 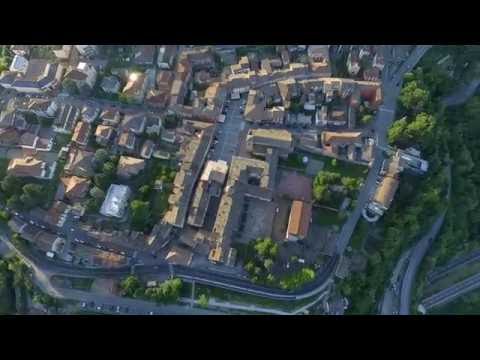 Sarsina is a village of ancient origins, founded by a population of Umbrian origin between the VI and the IV century B.C. Already in the III century B.C. Sarsina ruled a great state to here and beyond the ridge of the Apennines which included some valleys of Romagna and the upper Tiber River. Conquered by Rome in 266 B.C., became first "Federated City" and then "Municipality". In 255-251 BC there was born Tito Maccio Plauto, the largest Latin comedy writer. Between the III and the IV century it had its first bishop, Vicinio, then became the patron saint of the diocese, whose fame as a healer and an exorcist was kept alive until our days. Decayed with the collapse of the Roman Empire, suffered devastation and looting and, while passing from one domain to another, managed to retain part of its importance as a bishopric. The numerous testimonies of the ancient and glorious roman history are distributed within the historic center and kept in the National Archaeological Museum: one of the most interesting of northern Italy. The large Plautus Square, situated in the middle of the civitas, in the area of the ancient roman forum, closes in a lounge with the agile frame of the loggia, under the gaze of the millenary Cathedral, laughing in the warm redness of the facade. It represents a true "living room" for the sarsinati (people of Sarsina) and for the numerous tourists that every year visit the village. The "murello" of the parvis, hospitable bench for joyful gatherings, has been refined with some monuments of the roman necropolis of Pian di Bezzo. Other findings can be found in the courtyard of the bishopric, to the right of the Basilica of San Vicinio: one of the most remarkable examples of Romanesque architecture in Romagna. Inside the Basilica are preserved the mortal remains of San Vicinio and its thaumaturgical "chain", to which thousands and thousands of pilgrims every year come to receive the traditional "blessing". The testimony of the history of Sarsina are also preserved not only in the Archaeological Museum and the Basilica of San Vicinio, but also to the whole of the historical center, the Museum of Sacred Art and the small but charming medieval village of Calbano. The "Plautus Festival", the "Roman Feast", the "Sagra della Pagnotta" and the Feast of San Vicinio are the events that celebrate every year the original enogastronomy and splendours of this village, able to surprise and fascinate even the most distracted tourists. The Plautina Arena, inaugurated in 1995, is located at the foot of the medieval village of Calbano on a gentle slope overlooking the media-Alta Valle del Savio. Provided by 2008 of a movable covering to protect both the public, both the stage, is able to accommodate up to 1,068 spectators in comfortable armchairs numbered. Every year - in the months of july and august - is here set up the prestigious Plautus Festival, recognized by the Ministry of Culture, already from 1996, theatrical festival of national importance. Established in 1956, every year proposes 12-15 drama staged by the most important theater companies and by the most renowned actors of the theater and of the national film industry.

For over 30 years, in the two Sundays before Easter, the most important spring event in Romagna has been taking place: Pagnotta Festival. For the occasion, the historic center of the Plautian city will come alive with stands of the most genuine Romagna food and wine and craftsmanship. The festival proposes to enhance one of the most original sweets of Romagna cuisine, typical of the Savio Valley and, in a very particular way, of Sarsina.
La Pagnotta has ancient origins and like many similar preparations, it was once nothing more than a sweetened bread, often enriched with some raisins, which was never missing in the farmers' houses.

The Municipality is part of:
Road of Wines and Flavors of the Hills of Forlì and Cesena

The Basilica of San Vicinio
The chapel which closes the right nave preserves the relics of San Vicinio and its thaumaturgical...
Piazza Tito Maccio Plauto, 1, Sarsina
Calbano
At the top of the hill, Calbano was certainly for the romans - as it probably was the first for t...
Località Calbano, Sarsina
National Archaeological Museum of Sarsina
The National Archaeological Museum of the village of Sarsina allows a complete reading of the his...
Via Cesio Sabino, 39, Sarsina
Museum of Sacred Art
The Museum of Sacred Art of Sarsina extends along four environments "thematic" that collect a sig...
Piazza Tito Maccio Plauto, Sarsina
Mausoleum Of Obulacco
This is a cenotaph in form of a newsstand and pyramid-shaped spire, erected in the I century b.c....
Piazzale Antonio Gramsci, 35, Sarsina
Fairy Tales' Fortress
the Fairy Tales' Fortress is hosted inside the Fregoso fortress, the symbol of the village of San...

Piazza della Libertà - 47032, Bertinoro (Forli Cesena)
25.57 Kilometers from Sarsina
Malatesta Castle and Balestra Collection
The Malatesta Castle of Longiano is the permanent home of the contemporary art collection of the ...

Via Santa Maria, 2, Longiano (Forli Cesena)
22.28 Kilometers from Sarsina
Locanda Le Querce - Country House B&B
This beautiful hotel is located in the region of Montefeltro, between Tuscany and Romagna.

Nove Colli, cycling among the villages in Romagna
Starting from the sea with the smell of saltiness and pedaling immersing yourself in the Romagna landscape. Then drive through hairpin bends that climb over rolling hills, cross villages and, finally, admire the beaches and the blue waves of the waves from above. A day full of emotions that starts from the port of Leonardo in Cesenatico - Forlì Cesena - for the 48th edition of Nove Colli. The appointment is May 20, 2018, when lovers of ...
Continue
Recipe: the Spoja Lorda Romagnola
The spoja lorda romagnola is a typical feast dish that every real azdora (the real lady of the kitchen in Romagna) could do with your eyes closed! Also called the stuffed soup the spoja (puff pastry in dialect) is a delicate egg pasta (very similar to the Emilian puff pastry) filled with cream cheese, cooked in capon broth or hen which is then 'dirtied' (gross from which gross) with the stuffing. They have the appearance of small squares, about two centimeters on each side, made with the spur, the typic...
Continue
Sarsina and the Festival di Plauto
Sarsina as you know is a small village in the province of Forl- Cesena in Emilia Romagna, this village has the particularity every year in the middle of summer exactly from July 21 to August 17, 2019, to immerse its inhabitants and many visitors, in a timeless atmosphere of art, theater and culture, thanks to the Festival of Plautus, with a wink at the glories of ancient Rome. Sarsina and the Plauto Festival: a story that starts from a long time ago Plautus, whose full name is probably Tito Maccio Plautus was born ...
Continue